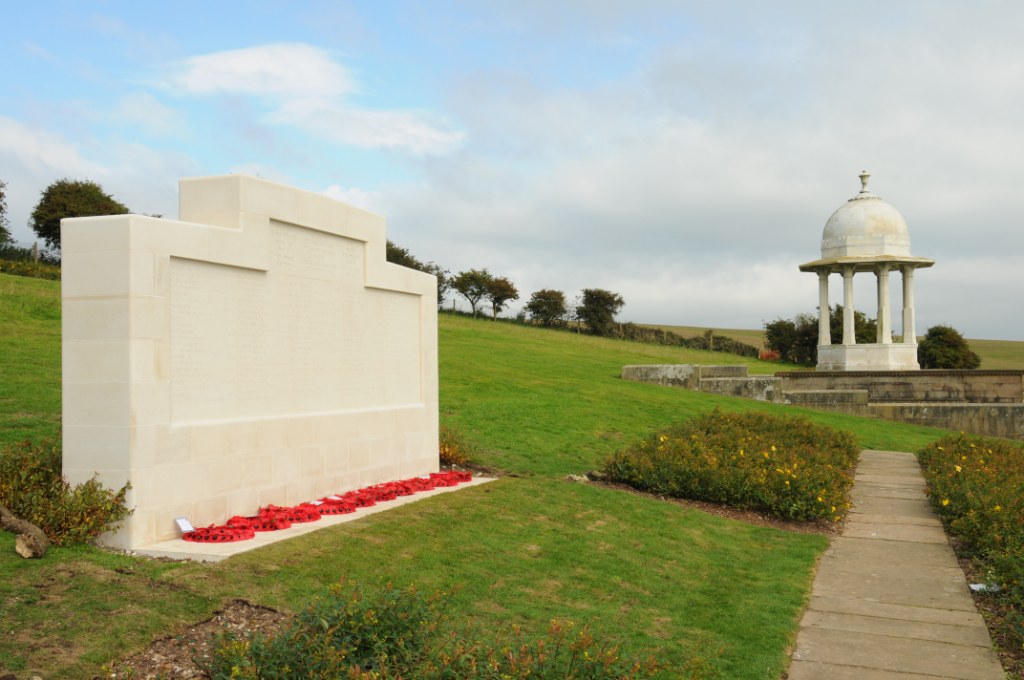 By Car: As you enter Brighton on the A23, take the A27 towards Lewes. At the second small roundabout (with a slip road to Lewes) take the north exit into Braypool Lane and immediately turn right. Park on the brow of the hill and walk to the Memorial and adjacent Chattri by following the sign-posted footpath. By Bus: Catch a bus from the Old Steine, Brighton, alight at Patcham Place YHA, London Road, Brighton. BN1 8YD.

Please note: To reach the Cremation Memorial and the adjacent Chattri Memorial involves walking some distance over farmland. However, on official days of memorial services, vehicles are allowed to park near the memorial.

The Memorial commemorates fifty-three men of Indian Army who died and were cremated at Patcham Down ghat during the First World War in accordance with Hindu and Sikh religious rites. These soldiers had all been transferred to hospital in Brighton after fighting on the Western Front in 1914/15. The graves of Muslim soldiers who died in Brighton are in Brookwood Military Cemetery, Surrey. The inscription on the memorial, which is written in Hindi, Punjabi and English, reads: "IN HONOUR OF THESE SOLDIERS OF THE INDIAN ARMY WHOSE MORTAL REMAINS WERE COMMITTED TO FIRE" The majority were originally commemorated on the Neuve-Chapelle Memorial in France, which is the memorial for 4,700 soldiers of the Indian Army who died on the Western Front and who have no known grave. Fourteen of the soldiers were commemorated on the Hollybrook Memorial in Hampshire, which is primarily for the commemoration of soldiers who died at sea. The Commonwealth War Graves Commission decided in 2009 that, although these men did not have graves, they were not 'missing' in the conventional sense and it would therefore be more appropriate to commemorate them on a memorial at the cremation site. The memorial was designed and built by the Commonwealth War Graves Commission and unveiled on 26 September 2010. THE CHATTRI MEMORIAL : The Cremation Memorial stands close to the Chattri Memorial, on land owned by Brighton and Hove City Council. The Chattri Memorial was built after the First World War to commemorate all the Indian soldiers who gave their lives in the war and is not a Commonwealth War Graves Commission memorial. The Chattri Memorial was unveiled by the Prince of Wales in 1921 with an inscription that reads: "To the memory of all the Indian soldiers who gave their lives for their King-Emperor in the Great War, this monument, erected on the site of the funeral pyre where the Hindus and Sikhs who died in hospital at Brighton, passed through the fire, is in grateful admiration and brotherly affection dedicated." More information on the Chattri can be found at www.chattri.com