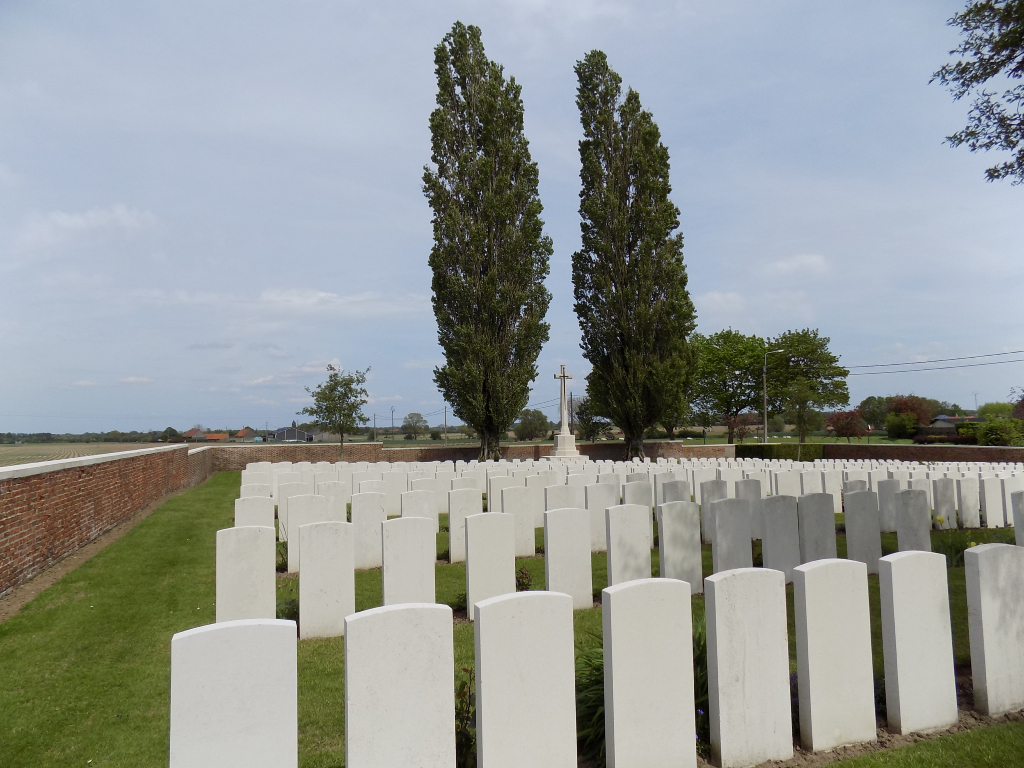 Voormezeele Enclosure No.3 is located 4 Kms south-west of Ieper town centre on the Ruusschaartstraat, a road leading from the Kemmelseweg (connecting Ieper to Kemmel N331). From Ieper town centre the Kemmelseweg is reached via the Rijselsestraat, through the Lille Gate (Rijselpoort) and straight on towards Armentieres (N365). 900 metres after the crossroads is the right hand turning onto the Kemmelseweg (made prominent by a railway level crossing). Turn right onto the Kemmelseweg and follow this road to the first crossroads, turn left here into Ruusschaartstraat. The Cemetery is located 1 Km after this junction on the left hand side of the road just before Voormezeele Dorp.

The Voormizeele Enclosures (at one time there were a total of four, but now reduced to three) were originally regimental groups of graves, begun very early in the First World War and gradually increased until the village and the cemeteries were captured by the Germans after very heavy fighting on 29 April 1918.

Voormezeele Enclosure No.3, the largest of these burial grounds, was begun by the Princess Patricia's Canadian Light Infantry in February 1915. Their graves are in Plot III, the other Plots from I to IX are the work of other units, or pairs of units, and include a few graves of October 1918. Plots X and XII are of a more general character. Plots XIII to XVI were made after the Armistice when graves were brought in from isolated sites and smaller cemeteries to replace the French graves (of April and September 1918) that were removed to a French cemetery. These concentrated graves cover the months from January 1915 to October 1918, and they include those of many men of the 15th Hampshires and other units who recaptured this ground early in September 1918.

There are now 1,611 Commonwealth servicemen of the First World War buried or commemorated in Voormezeele Enclosure No.3. 609 of the burials are unidentified but there are special memorials to 15 casualties known or believed to be buried among them. Other special memorials record the names of five casualties whose graves in PHEASANT WOOD CEMETERY could not be found on concentration.