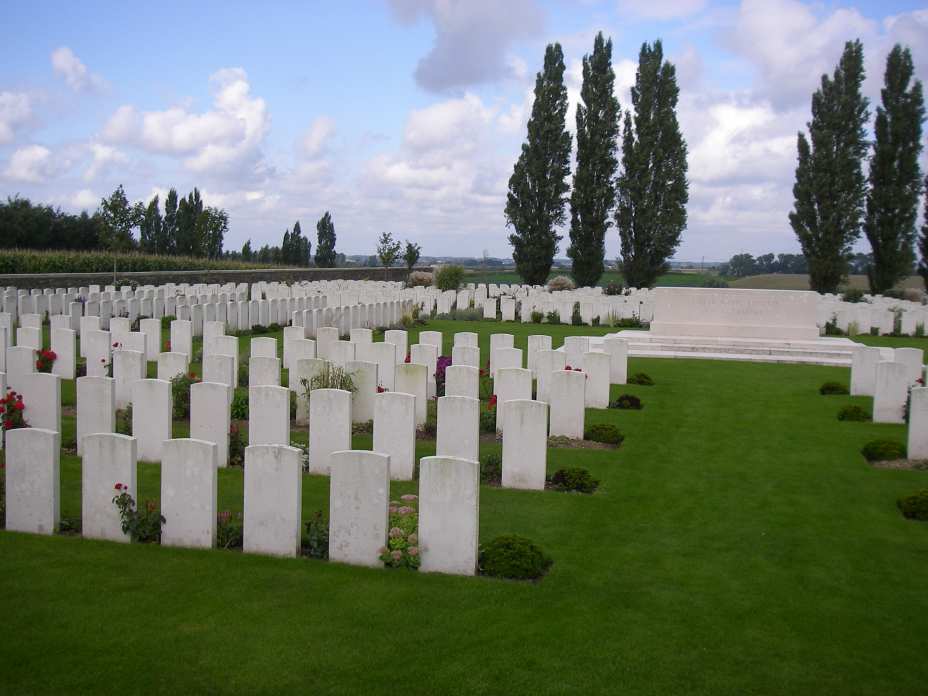 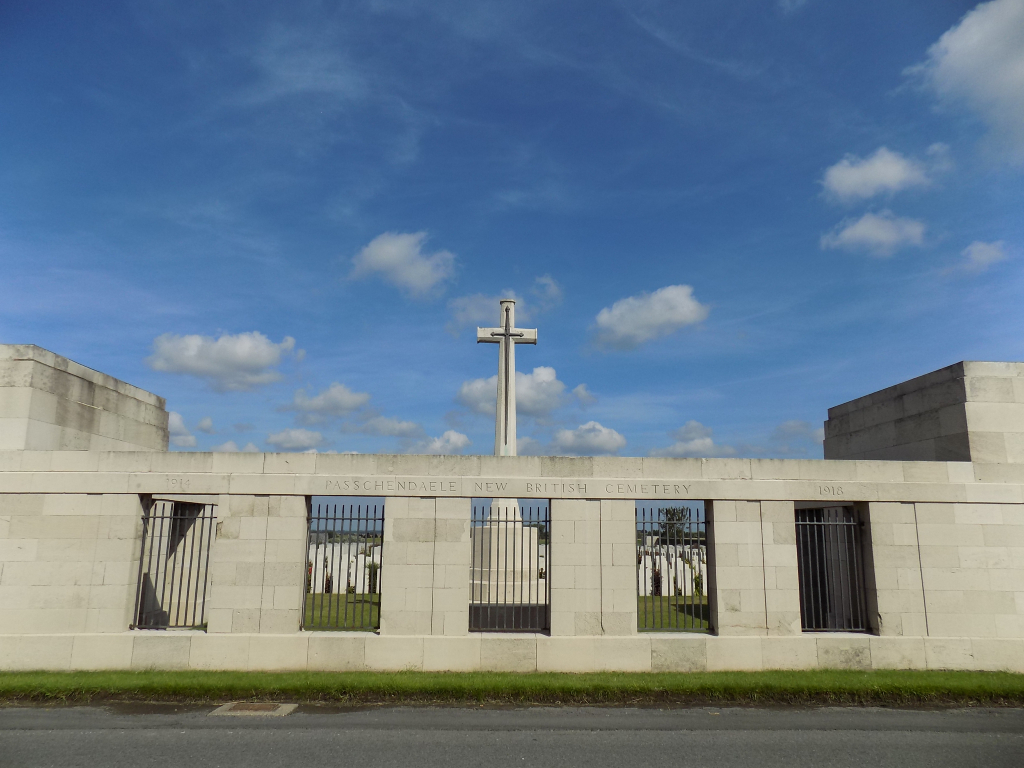 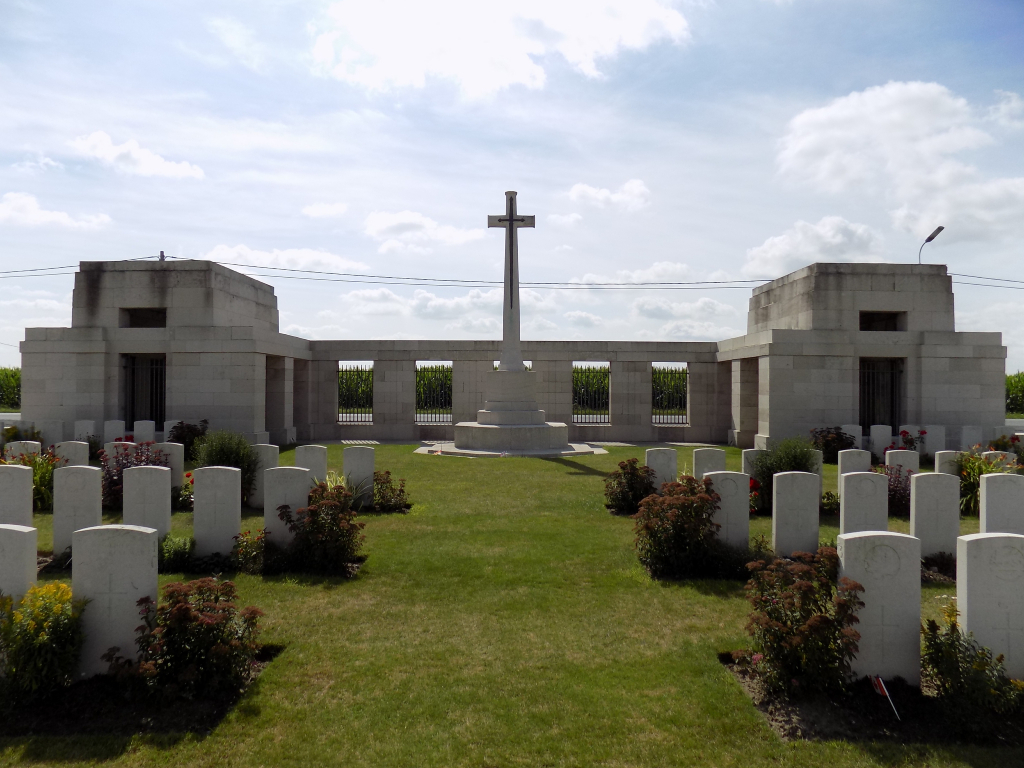 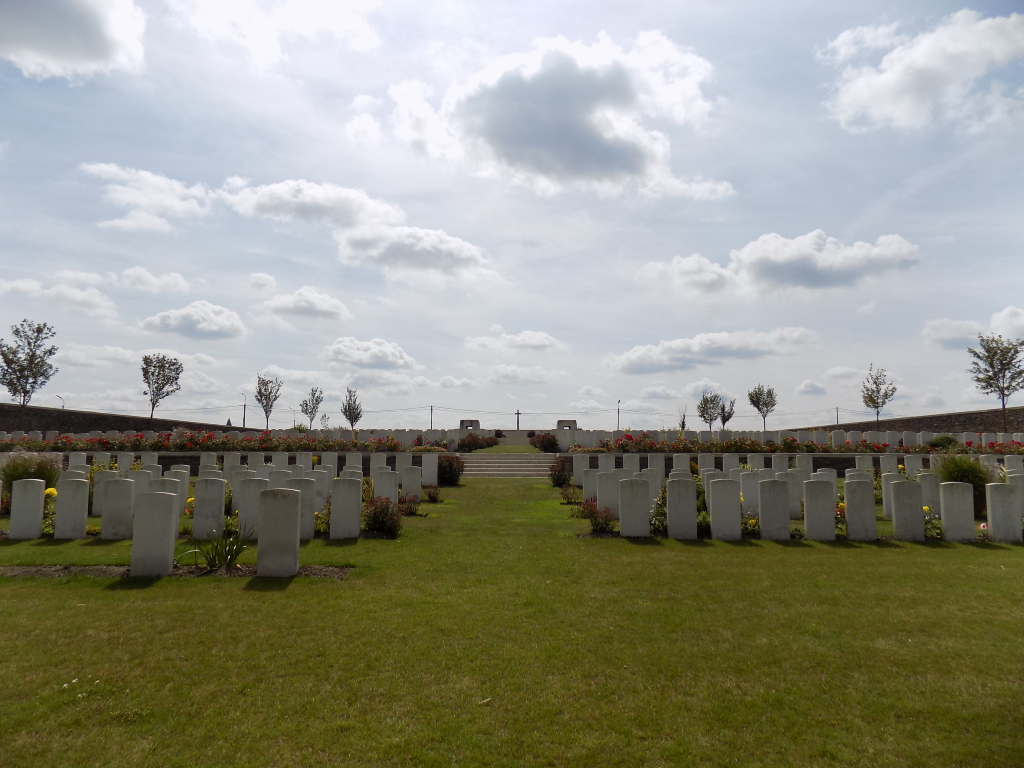 Passchendaele (Passendale) New British Cemetery lies 10.5 Kms north-east of Ieper town centre on the S'Graventafelstraat, a road leading from St Jan to Passendale. Two roads connect Ieper town centre onto the Zonnebeekseweg; the Torhoutstraat leads from the market square onto a small roundabout. At the roundabout the first right turn is Basculestraat. At the end of Basculestraat, there is a crossroads and Zonnebeekseweg is the turning to the left. 7 Kms along the Zonnebeekseweg, in the village of Zonnebeke, lies the left hand turning onto the Langemarkstraat (further on this street name changes to Zonnebekestraat). 2 Kms along this road, and after passing Dochy Farm New British Cemetery, lies the right hand turning onto the 'S Graventafelstraat. 4 Kms along the 'S Graventafelstraat, and after passing the New Zealand Memorial, lies the cemetery on the left hand side of the road.

This cemetery is on three different levels, with steps going from one level to another. For wheelchair access between the levels there are grassed ramps to the right of the cemetery, near the wall. Wheelchair users can enter the cemetery via a service entrance situated to the left of the main entrance.

The village of Passchendaele (now Passendale) and surrounding area were associated with every phase of the First World War. In the middle of October 1914, Passchendaele was briefly under Allied occupation but by 20 October it was in German hands, where it remained for the next three years. On 6 November 1917, after the severest fighting in most unfavourable weather, the 5th Canadian Infantry Brigade took, and passed, the village; this fight was part of the Second Battle of Passchendaele, the last of the Battles of Ypres, 1917. In the middle of April 1918, in the Battles of the Lys, the Allied line was withdrawn far back on the road to Ypres, but on 29 September, in the course of the Allied offensive in Flanders, Belgian forces recaptured the village.

The New British Cemetery was made after the Armistice when graves were brought in from the battlefields of Passchendaele and Langemarck. Almost all of the burials are from the autumn of 1917.

The cemetery now contains 2,101 burials and commemorations of the First World War. 1,600 of the graves are unidentified but there are special memorials to seven casualties believed to be buried among them.