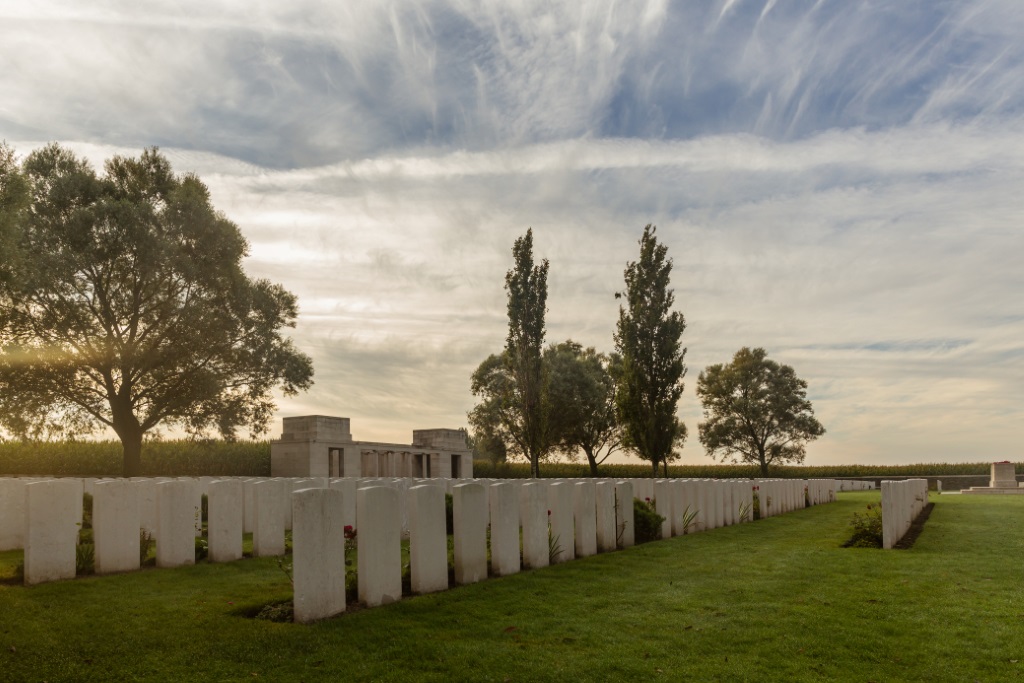 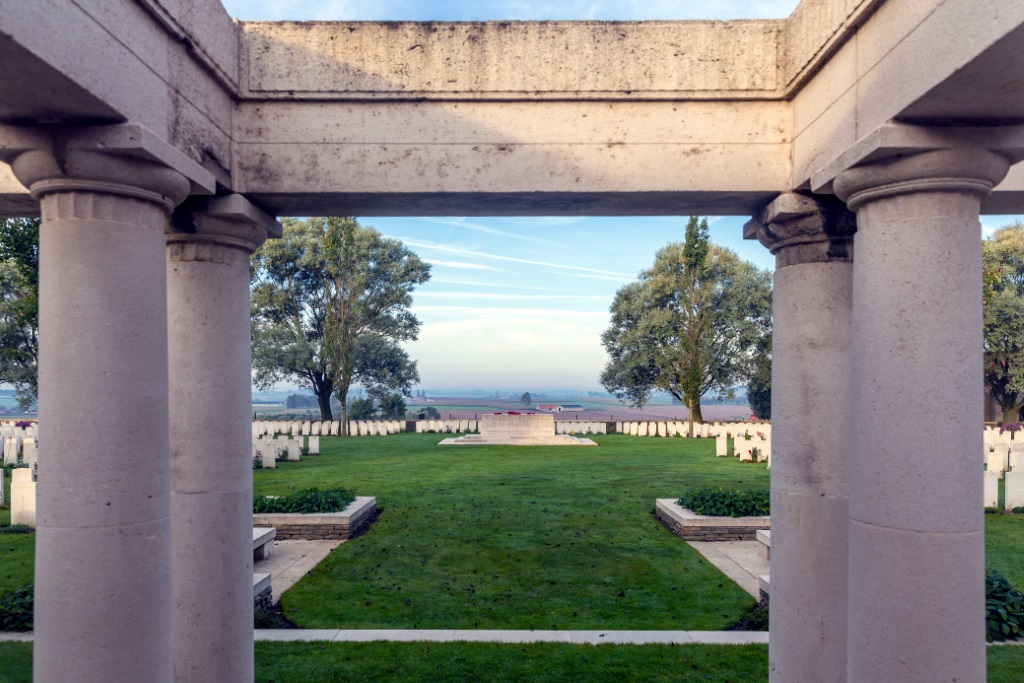 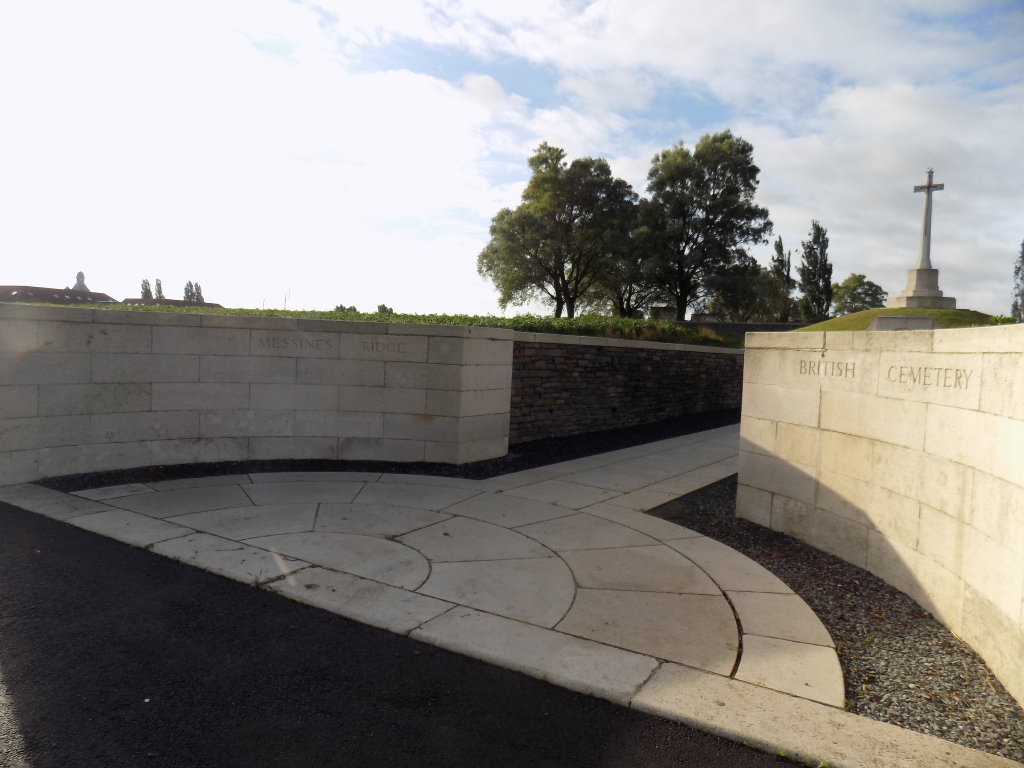 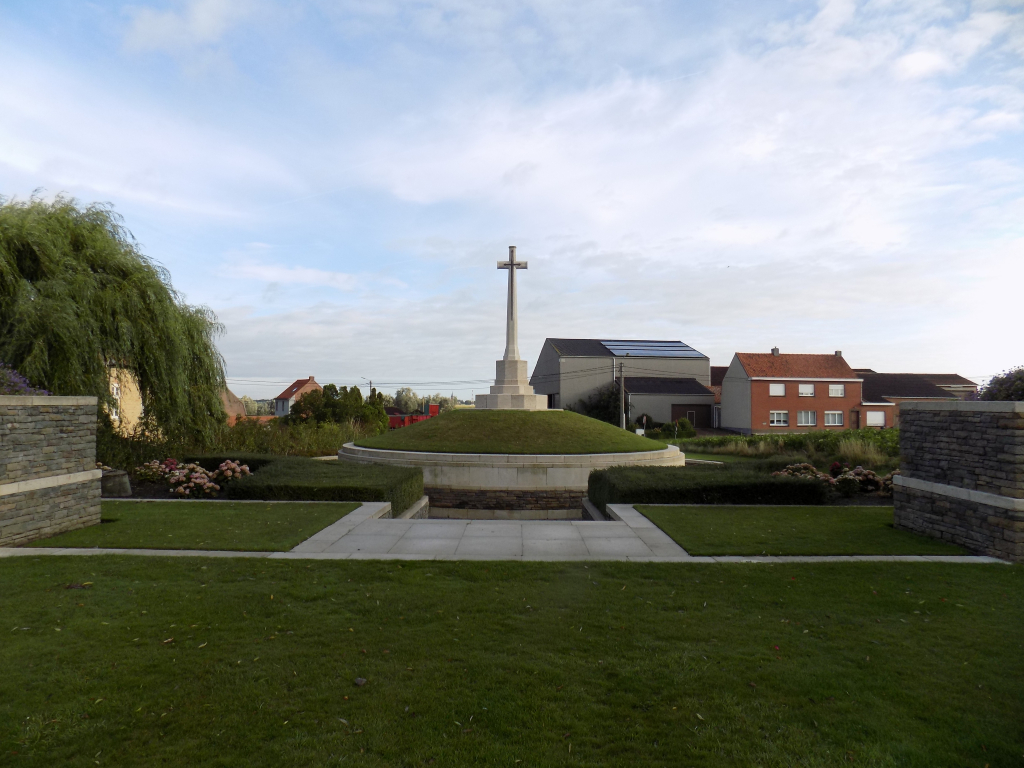 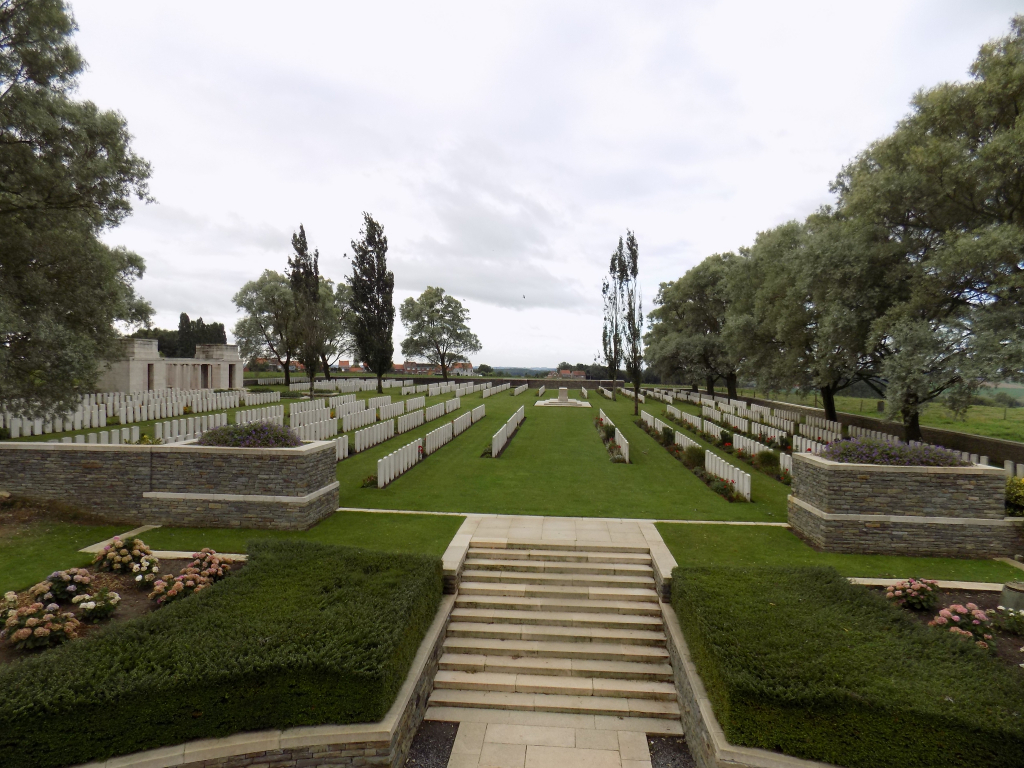 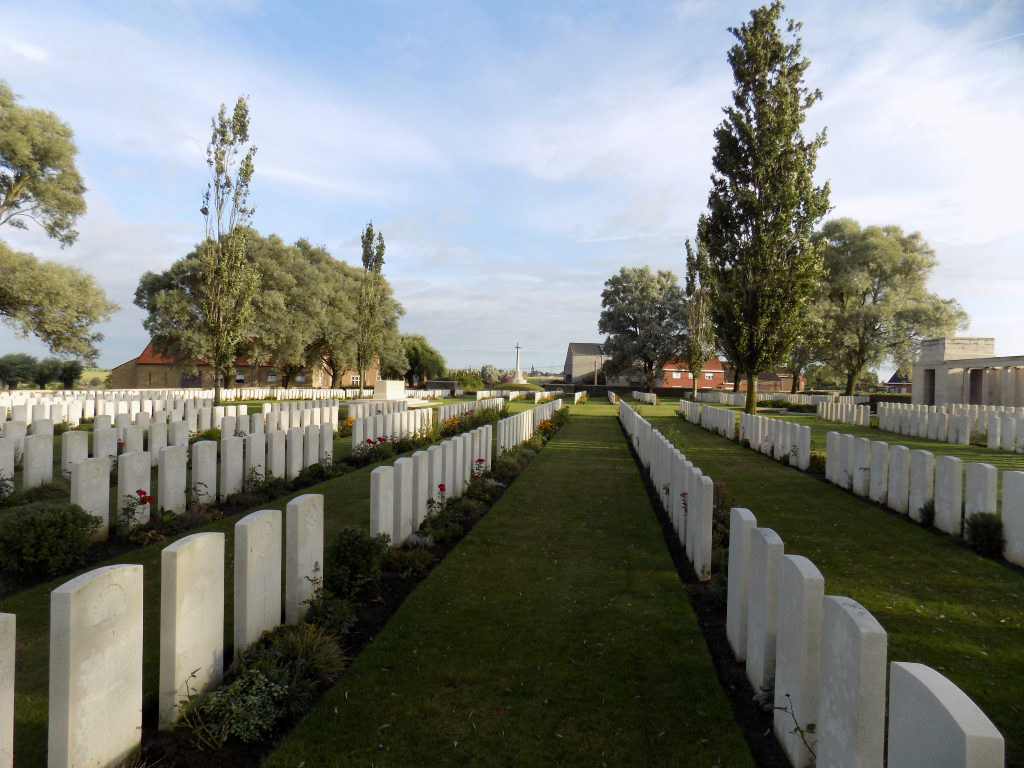 Messines Ridge British Cemetery is located 9.5 Kms south of Ieper town centre on the Nieuwkerkestraat, a road leading from the Rijselseweg, N365, which connects Ieper to Wijtschate, Mesen and on to Armentieres. From Ieper town centre the Rijselsestraat runs from the market square, through the Lille Gate (Rijselpoort) and directly over the crossroads with the Ieper ring road. The road name then changes to the Rijselseweg. Nieuwkerkestraat is a right hand turning from the N365 in the town of Mesen. The cemetery lies 250 metres after this right hand turning, on the left hand side of the road.

Messines (now Mesen) was considered a strong strategic position, not only from its height above the plain below, but from the extensive system of cellars under the convent known as the 'Institution Royale.' The village was taken from the 1st Cavalry Division by the German 26th Division on 31 October-1 November 1914. An attack by French troops on 6 -7 November was unsuccessful and it was not until the Battle of Messines on 7 June 1917 that it was retaken by the New Zealand Division. On 10-11 April 1918, the village fell into German hands once more after a stubborn defence by the South African Brigade, but was retaken for the last time on 28-29 September 1918.

MESSINES RIDGE BRITISH CEMETERY, which stands on ground that belonged to the 'Institution Royale' (the Cross of Sacrifice is on the site of the Institution's windmill), was made after the Armistice when graves were brought in from the battlefield around Messines and from the following small burial grounds:-

BELL FARM CEMETERY, WYTSCHAETE, near the South side of the Messines-Kemmel road, where 32 soldiers of the 25th Division were buried in June, 1917.

BOUSBECQUES EAST GERMAN CEMETERY, on the South side of the village, where four soldiers from the United Kingdom were buried by a German Field Hospital in November, 1914.

BRISTOL CASTLE MILITARY CEMETERY, MESSINES, on the Wulverghem road near Wulverghem, where 32 United Kingdom soldiers of the 36th (Ulster) and 14th (Light) Divisions were buried in September and October, 1918.

LUMM FARM CEMETERY, WYTSCHAETE, a little East of the Messines road, where 13 United Kingdom and two Australian soldiers were buried in June-September, 1917.

ONRAET FARM CEMETERY, WYTSCHAETE, between Wytschaete and St. Eloi, in which 29 soldiers of the 36th Division were buried in June-August, 1917.

QUEENSLAND CEMETERY, WARNETON, on the lower road from Messines to Warneton, where 30 Australian soldiers (of whom 23 belonged to the 41st Battalion) and three from the United Kingdom were buried in June and July, 1917.

The dates of death of those buried here range from October 1914 to October 1918, but the majority died in the fighting of 1917.

There are now 1,534 Commonwealth servicemen of the First World War buried or commemorated in the cemetery. 957 of the burials are unidentified, but special memorials commemorate a number of casualties known or believed to be buried among them, or who were buried in other cemeteries where their graves were destroyed by shell fire.

Within the cemetery stands the MESSINES RIDGE (NEW ZEALAND) MEMORIAL which commemorates over 800 soldiers of the New Zealand Expeditionary Force who died in or near Messines in 1917 and 1918 and who have no known grave.

Both cemetery and memorial were designed by Charles Holden.