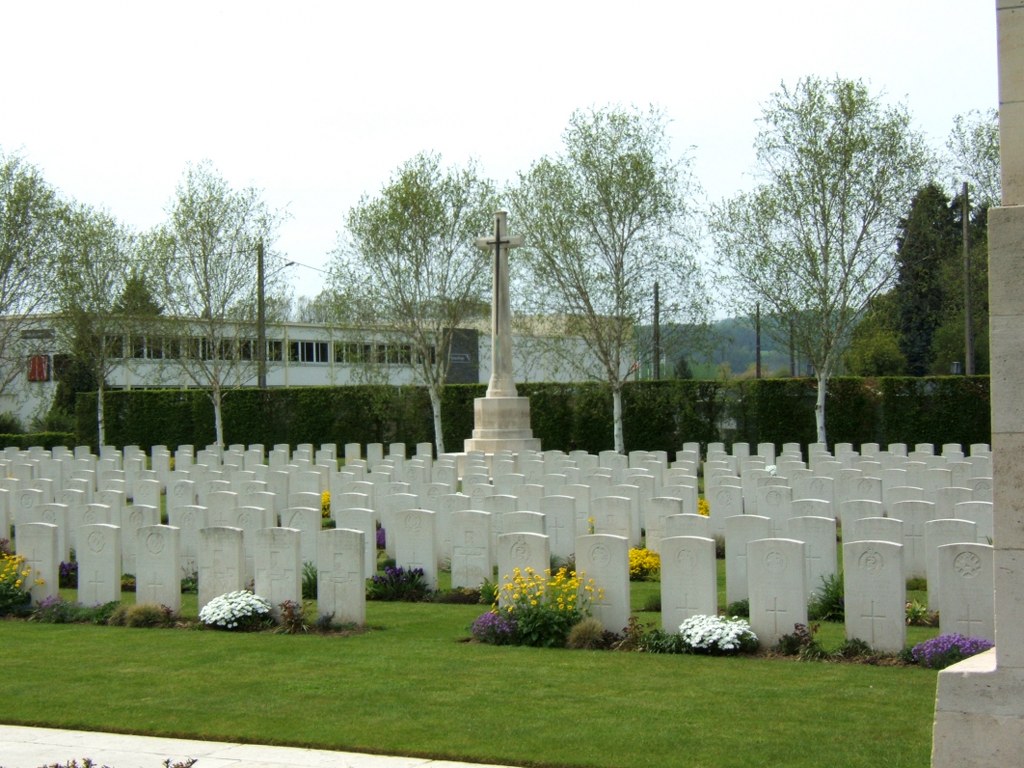 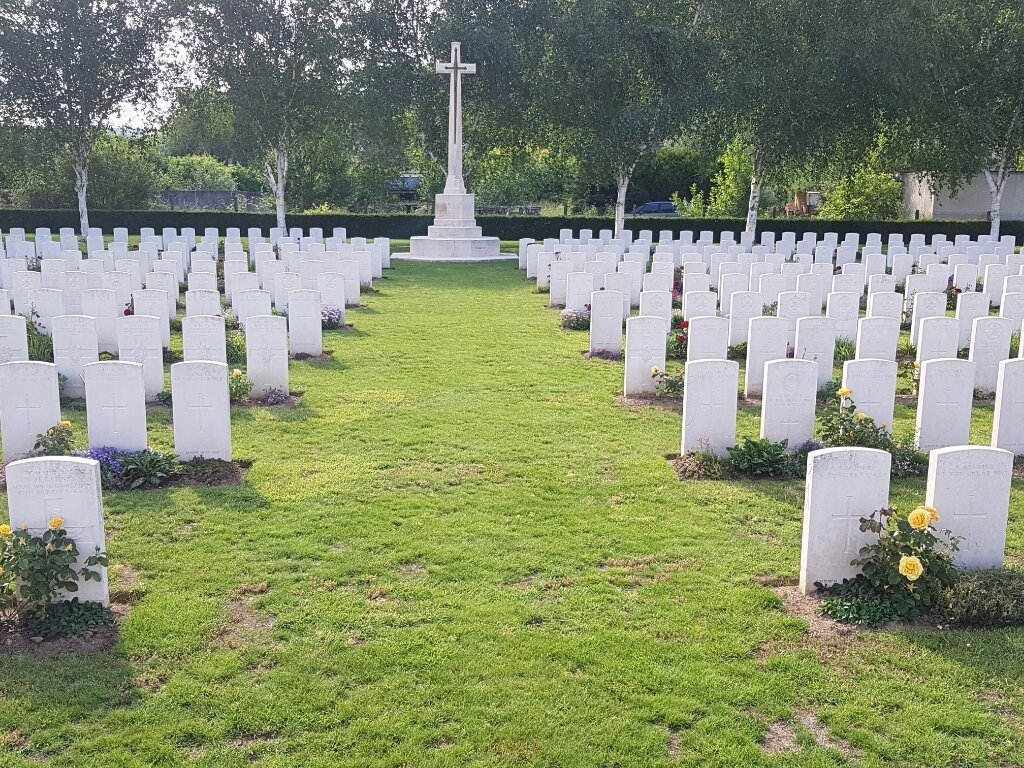 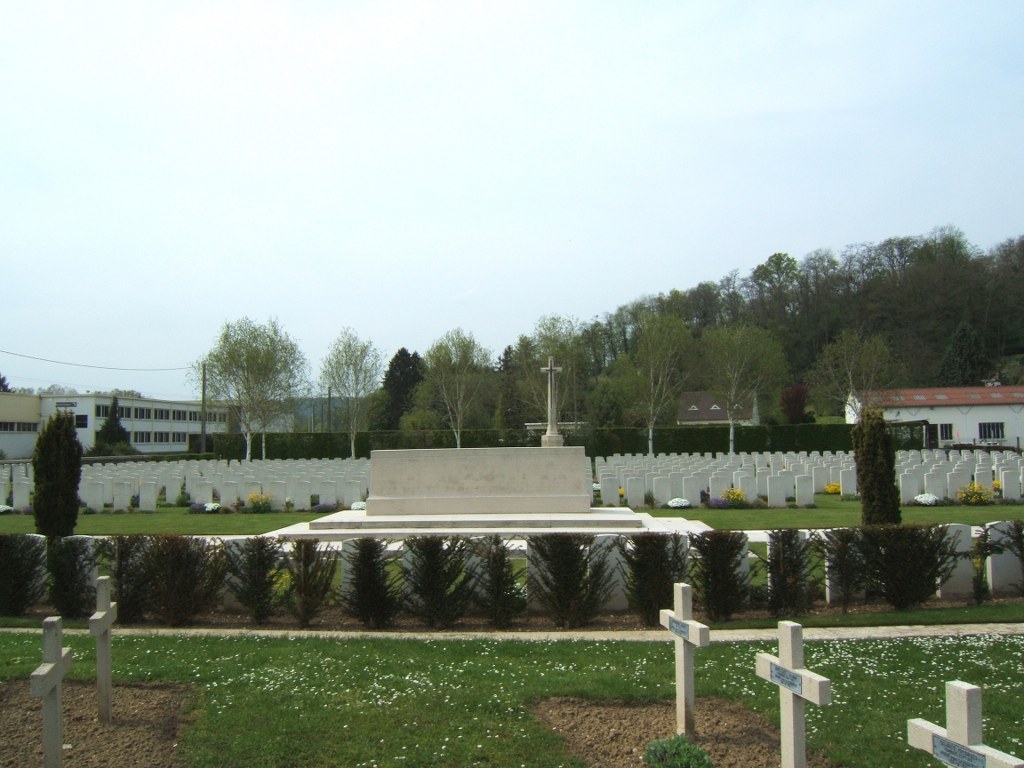 Vailly-sur-Aisne is a small town within the Department of the Aisne, on the north bank of the Aisne River. It is 13 kilometres east of Soissons and 18 kilometres south of Laon. Leaving from "Centre Ville" in Soissons, take the first right hand turning, following the sign "Toute Directions", which is then followed by a left turn, signposted "Laon". Follow the river and cross over at the first bridge, still following the road signs for Laon. At the next road junction continue straight over, again following the signs for "Laon". After a total of 3 kilometres turn right at the signpost indicating the direction of Vailly-sur-Aisne, which will be on the D925 road. Stay on this road for the remainder of the journey. The Cemetery is adjacent to the road on the left side shortly after entering the town.

The village of Vailly-sur-Aisne was the point at which the 3rd Division crossed the river Aisne on 13 and 14 September 1914 during the Allied advance from the Marne. It fell to the German forces in 1915, was retaken by the French during the Chemin des Dames Offensive in April 1917, lost again to the Germans in June 1918 and finally captured by the French on 15 September 1918. Vailly British Cemetery was established after the Armistice when the remains of Commonwealth soldiers were brought here from other burial grounds and battlefields throughout the region.

The following were among the burial grounds from which Commonwealth graves were taken to Vaillly British Cemetery:

AIZY FRENCH MILITARY CEMETERY, North-East of the village, where 17 British soldiers were buried.

BRAINE FRENCH MILITARY CEMETERY (not the present French National Cemetery), in which the bodies of ten British soldiers and an unknown Canadian airman were reburied by the French.

BRENELLE CHURCHYARD FRENCH EXTENSION, which contained about 500 graves. Here were buried nine men of the R.G.A., killed in September 1914, by the bursting of a gun, and one Lancer who fell in the same month.

BUCY-LE-LONG CHURCHYARD, in which one British and a number of French soldiers were buried in 1918.

CHATEAU THIERRY COMMUNAL CEMETERY, where one British soldier from 1914 was concentrated in 1936. Two other British soldiers were moved from this cemetery, to Montreuil-Aux-Lions British Cemetery in June 1934.

COURCHAMPS CHURCHYARD, in which eight British soldiers were buried in the North-West corner of the churchyard. Two of the soldiers are unidentified.

COURCELLES COMMUNAL CEMETERY, where two British soldiers were buried, one of which is unidentified.

GLENNES CHURCHYARD EXTENSION, where three British soldiers were buried by the Germans in May 1918, and eight (of 1914) reburied by the French; it contained also 803 French and 400 German graves.

LAFFAUX GERMAN CEMETERY (on the main road half a mile South-West of the Mill), where one British soldier was buried in July 1918.

MONT-NOTRE DAME MILITARY CEMETERY (near the road to Quincy), where 46 British soldiers and two members of the Friends' Ambulance Unit were buried in 1918.

PAARS CHURCHYARD, where one British soldier was buried.

SOUCY COMMUNAL CEMETERY, South of the village, where one British soldier was buried in the South-West corner.

VASSENY FRENCH MILITARY CEMETERY (near the road to Couvrelles), where one British soldier was buried in 1918.

VIEIL-ARCY BRITISH CEMETERY, near the Ferme Chauveau, where 27 British soldiers were buried in September and October 1914.

Most of those buried here were killed during the Battle of the Aisne in September 1914, but the cemetery is also the final resting place of over sixty Commonwealth soldiers who were killed or mortally wounded in the summer of 1918. The cemetery now contains over 670 Commonwealth burials and commemorations of the First World War.

The first day of the Battle of the Aisne

Following the Allied victory at the Battle of the Marne in mid-September 1914, the German forces retreated to the high ground of the Chemin des Dames ridge on the north bank of the River Aisne. As they moved northward, the Germans were closely pursued by units of the British Expeditionary Force (BEF) and their French allies. The first British troops crossed the Aisne at Venizel on the evening of 12 September, and Allied units crossed at different points along the river over the course of the next day. The Royal Scots and Royal Irish regiments made their way over the remains of the bridge at Vailly-sur-Aisne, under steady shellfire, on the afternoon of the 13th. By the early hours of the following morning British and French troops had formed bridgeheads at several points on the north bank of the river and were preparing to attack. The Allied intention was to advance north toward Laon, capture the heights, and force the German armies to continue their retreat. Allied commanders were unaware of the real strength of the enemy forces on the Chemin des Dames ridge, but it soon became clear that the German units had dug trenches, were supported by heavy artillery, and intended to stand and fight.

In heavy rain and dense mist, brigades of the 1st and 2nd Divisions of the BEF began advancing toward the German lines between 3 a.m. and 5 a.m. on the morning of 14 September. They had hoped to seize as much enemy ground as possible before day break, but despite some early successes German resistance was determined and by 7 a.m. British troops were coming under heavy rifle, machine-gun and artillery fire. Thick fog, combined with the sheer number of units deployed and the unexpected strength of the German forces, caused much confusion on the battlefield. The British battle plan was also frustrated by the unexpectedly accurate fire of German howitzers on the heights. As the day wore on, the battle descended into a series of attacks and counter-attacks and both sides suffered heavy casualties.

By nightfall on 14 September, British units on the north bank of the river had been ordered to dig trenches and reinforce their positions, which now spanned a twenty-mile front. Although the Battle of the Aisne continued for another ten days, neither side could claim a decisive victory; the German forces failing to drive the Allies back across the river, and the Allies unable to push the Germans from the ridge. This ‘stabilization’ of the front marked the beginning of trench warfare – a gruelling stalemate that would last for almost four years.