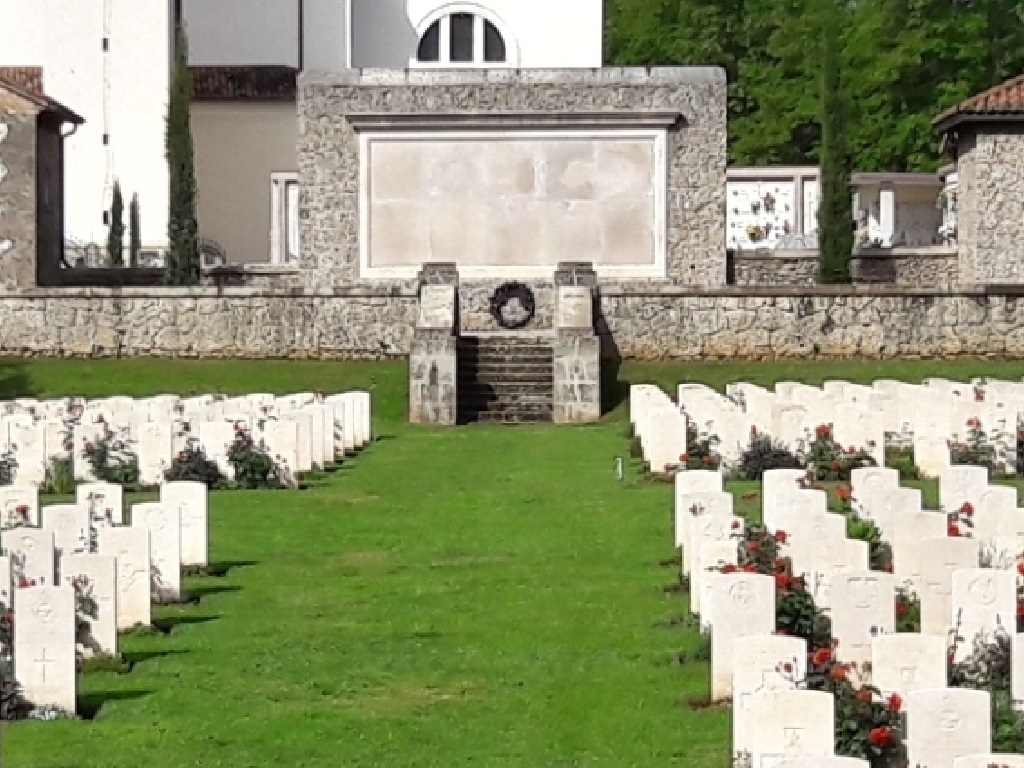 Giavera is 12 kilometres east of Montebelluna and 20 kilometres west of Conegliano on the S248, the road that joins the two towns. Take the Treviso Nord exit from the A27 in the Spresiano - Giavera direction then follow the signs to the cemetery. The cemetery is 1 kilometre from the village, on the hill Montello. Buses run from Montello and Conegliano train stations. Cemetery address: Via Monsignor Agnoletti s.n - 31040 Giavera del Montello (TV) Veneto. GPS Co-ordinates: Latitude: 45.803000, Longitude: 12.164500. The Memorial, which occupies a central position on the western wall of the cemetery, consists of a large marble tablet surmounted by a heavy moulded cornice and inscribed with the names and dates of death arranged alphabetically by Regiment. It bears the words: TO THE MEMORY OF THOSE OFFICERS, NON-COMMISSIONED OFFICERS AND MEN WHO FELL IN ITALY DURING THE GREAT WAR 1914-18 AND HAVE NO KNOWN GRAVE. The site commands a view of the Asiago Plateau, where the British forces in Italy helped to repel a powerful Austrian attack in June, 1918, and of the battleground between the Piave and the Monticano, where at the end of October, 1918, they played their part in the triumph of Vittorio-Veneto. These and other smaller incidents of the campaign are commemorated on this monument, together with the names of those British soldiers who fell in Italy and whose places of burial are unknown.

The Giavera Memorial is situated within Giavera British Cemetery

The Italians entered the war on the Allied side, declaring war on Austria, in May 1915. Commonwealth forces were at the Italian front between November 1917 and November 1918. On 4 December 1917, the X1th and XIVth Corps relieved the Italians on the Montello sector of the Piave front, with the French on their left. The Montello sector acted as a hinge to the whole Italian line, joining that portion facing north from Mount Tomba to Lake Garda with the defensive line of the River Piave covering Venice, which was held by the Third Italian Army. The Commonwealth troops on the sector were not involved in any large operations, but they carried out continuous patrol work across the River Piave, as well as much successful counter battery work. In January 1918, an additional sector of the defence on the right was taken over by the Commonwealth troops. Between December and March the Royal Flying Corps carried out a large number of successful raids on enemy aerodromes, railway junctions, and other objectives. In March 1918, the Commonwealth troops on the Montello sector were relieved. Three Divisions (7th, 48th and 23rd) took over the Asiago sector in the mountains north of Vicenza, and two Divisions (5th and 41st) were despatched to France. In October, the 7th and 23rd Divisions were withdrawn from the Asiago Plateau to take over the northern portion of the X1th Italian Corps front from Salletuol to Palazzon, on the River Piave. These Divisions took a prominent part in the Passage of the Piave (23 October-4 November 1918) during the final Battle of Vittorio-Veneto. On 4 November the Armistice came into effect, and active hostilities ceased. Men who died in defending the Piave from December 1917, to March, 1918, and those who fell on the west of the river during the Passage of the Piave, are buried in this cemetery. GIAVERA BRITISH CEMETERY contains 417 Commonwealth burials of the First World War. Within the cemetery stands the GIAVERA MEMORIAL, which commemorates more than 150 members of the Commonwealth forces who died in Italy in 1917 and 1918 and whose places of burial are unknown.