Due to rail renovation works outside the main wooden gate, access to the Australian memorial is currently not possible. Visitors can access the cemetery from the staff entrance (next to the Hospital). This gate will be open during working hours only (Monday to Friday, 06:00 til 14:45). 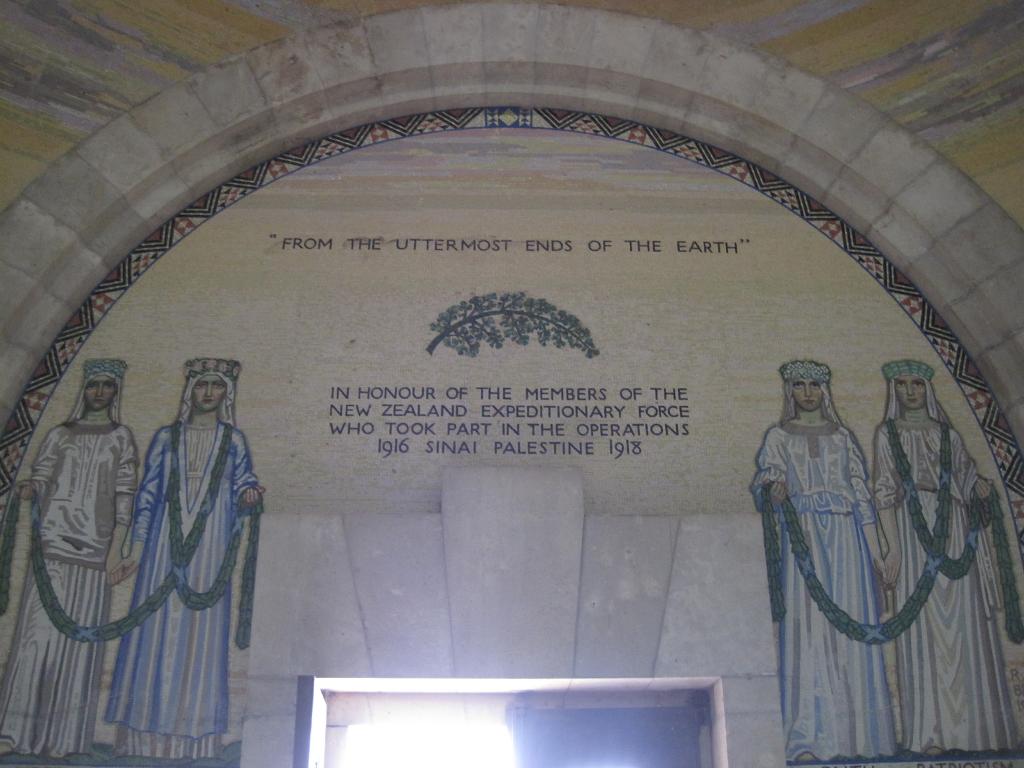 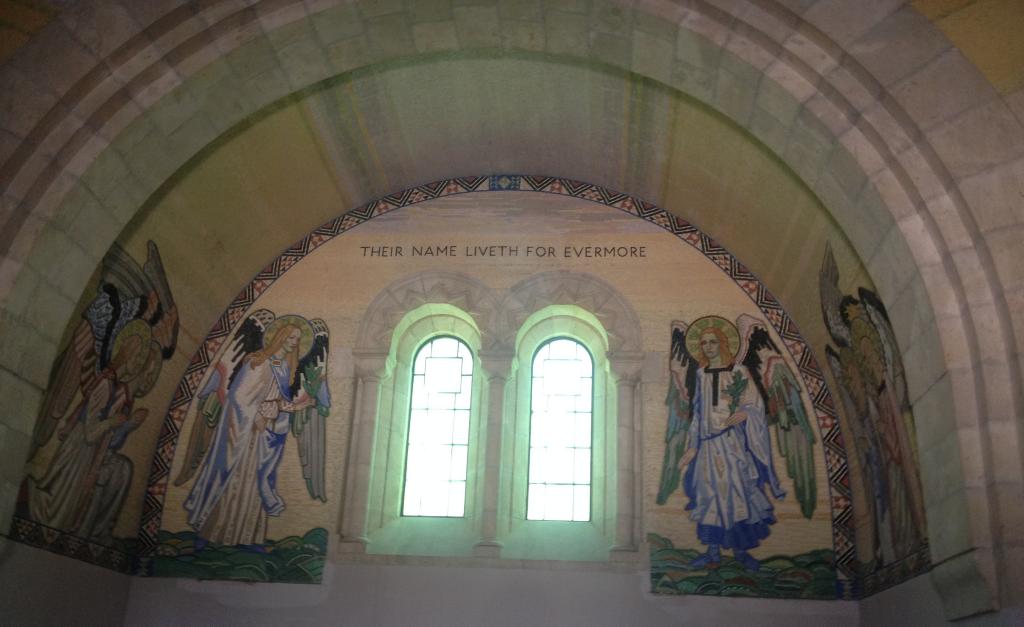 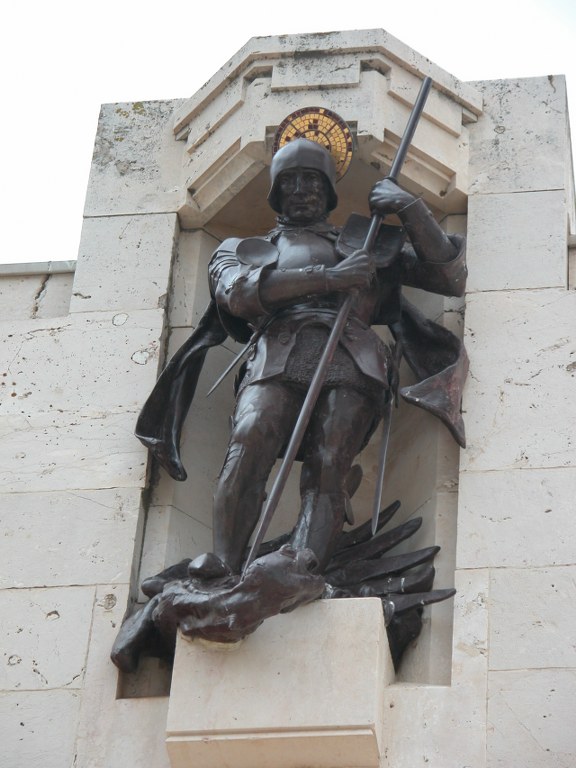 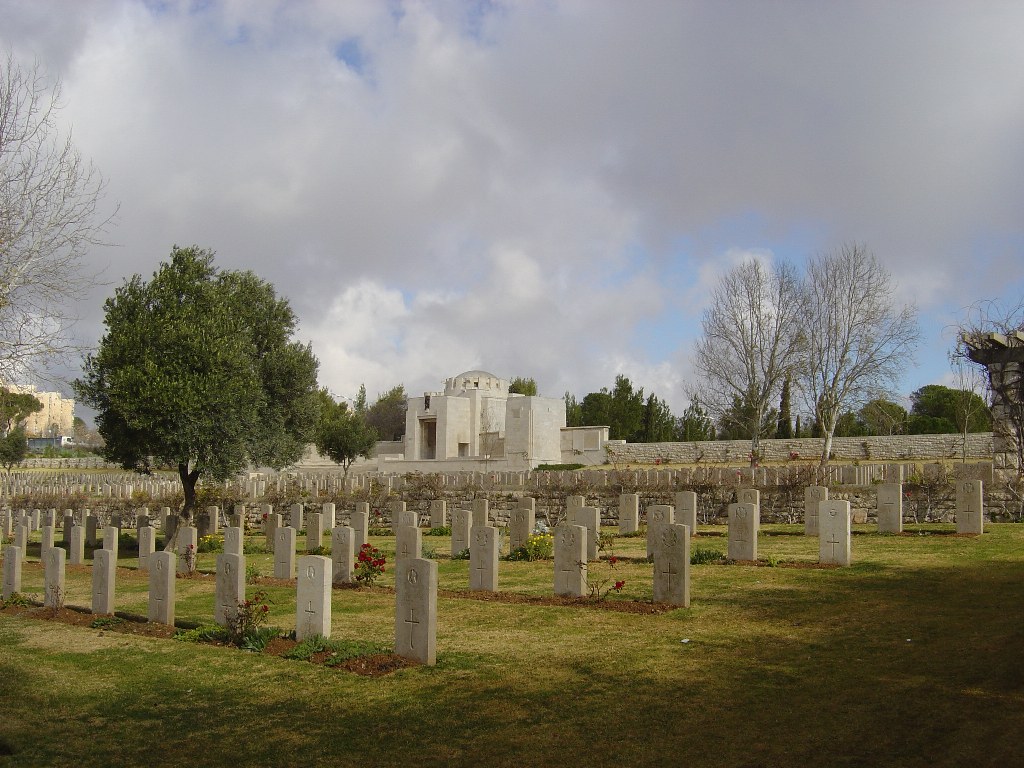 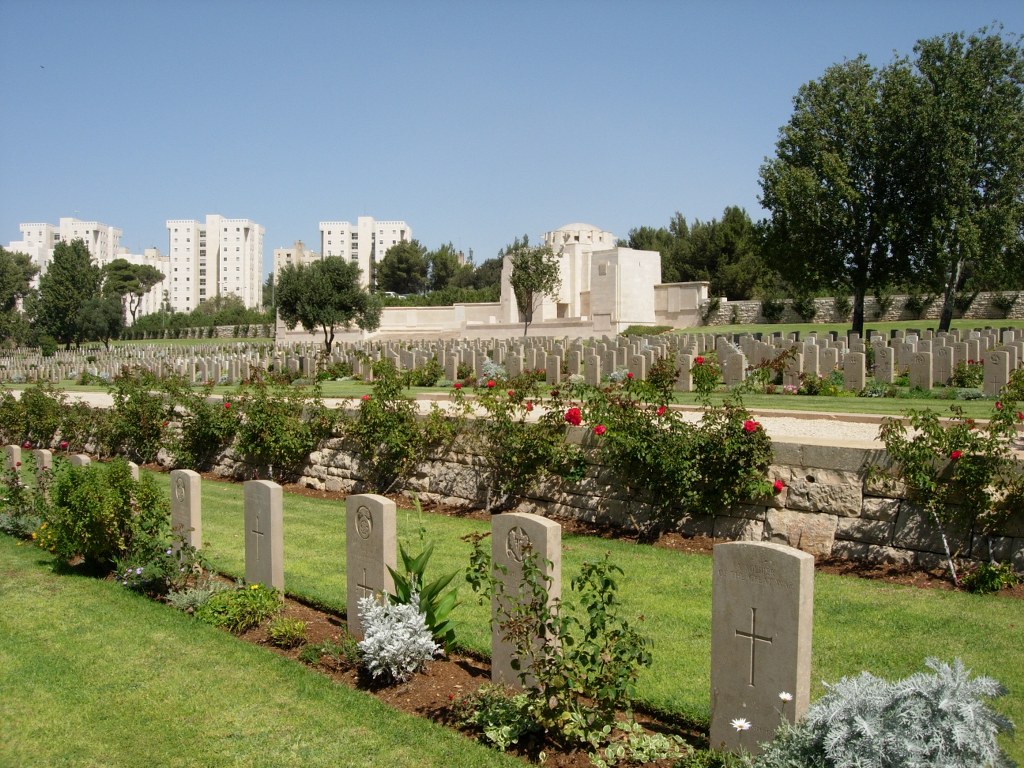 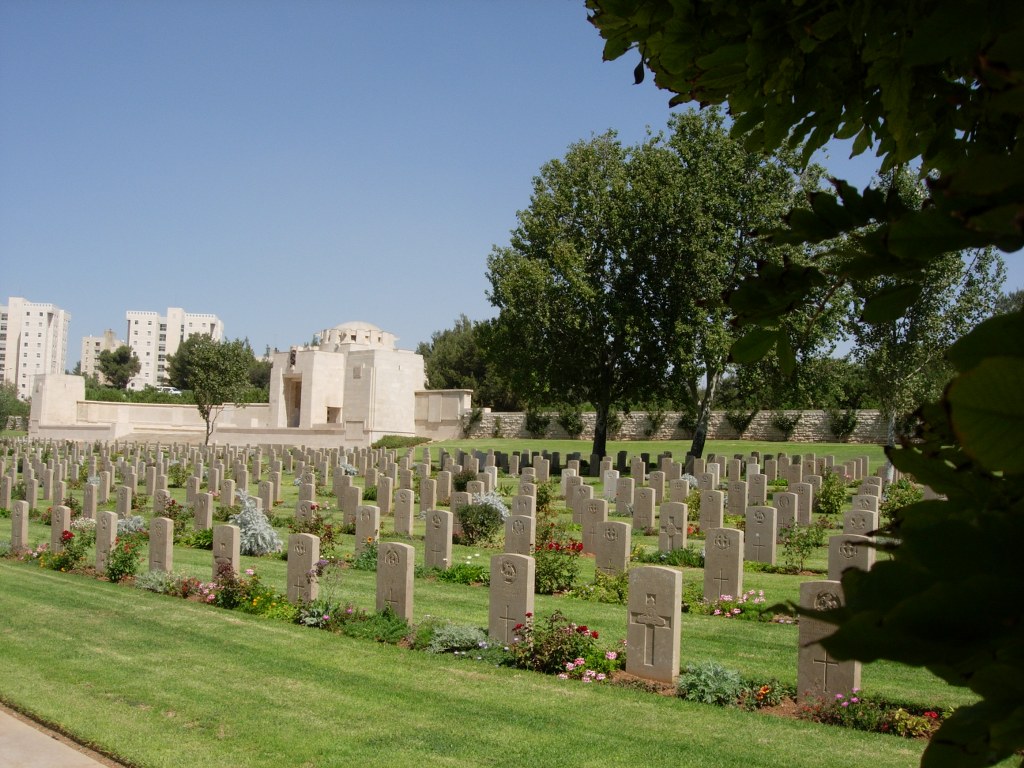 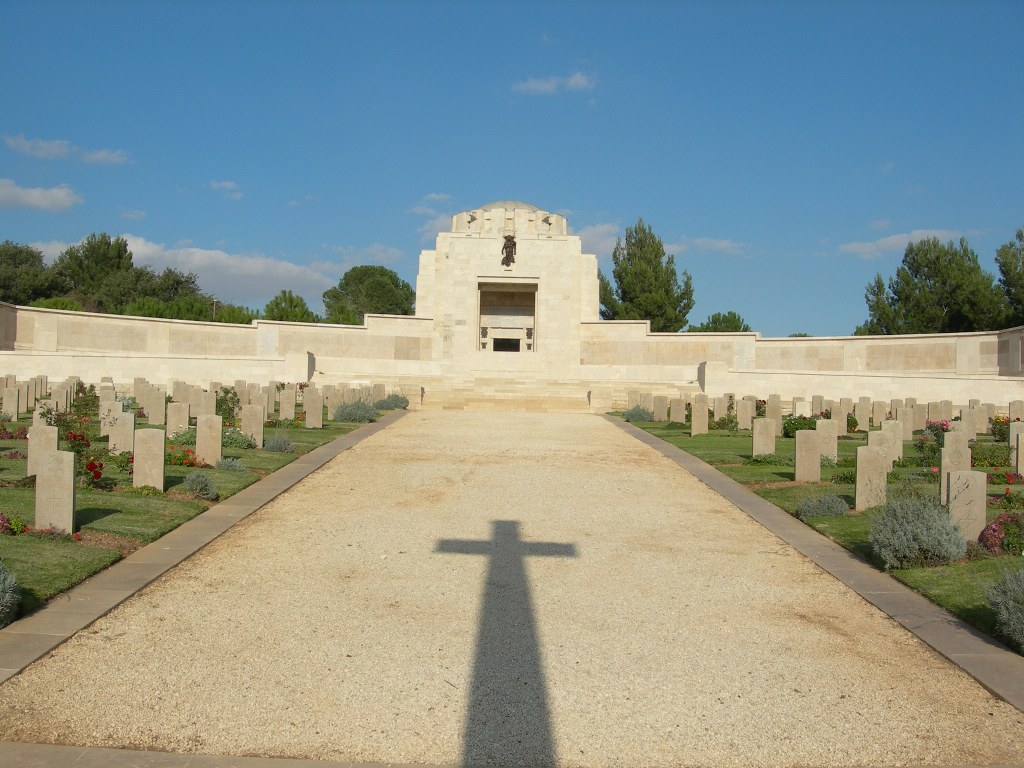 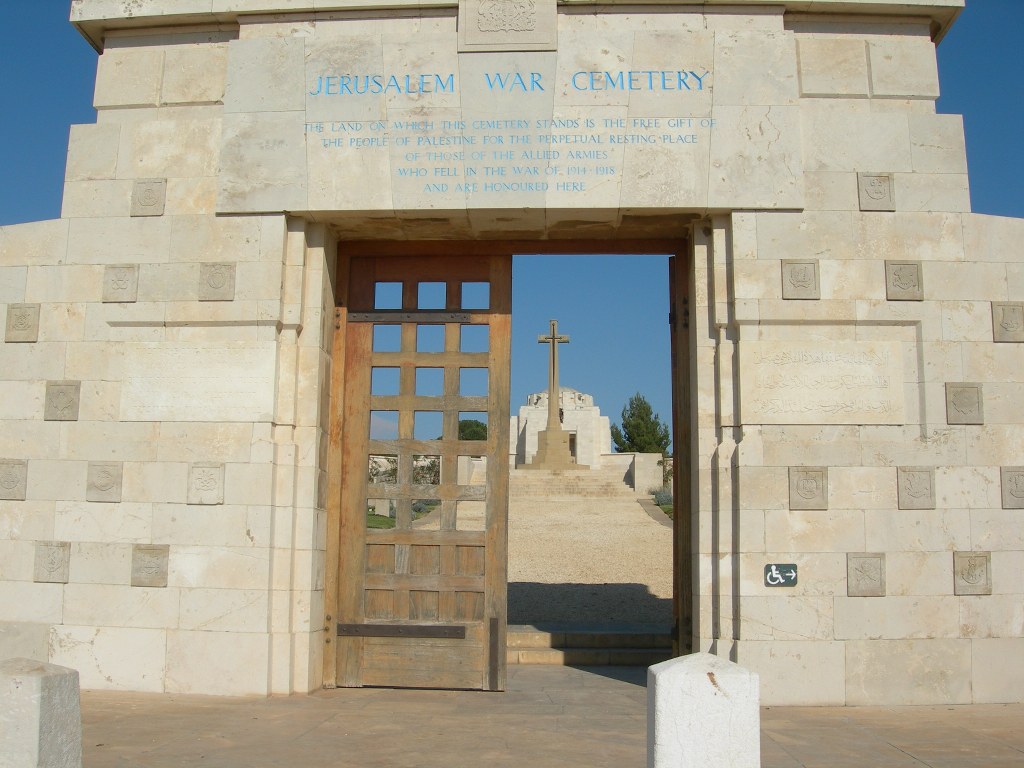 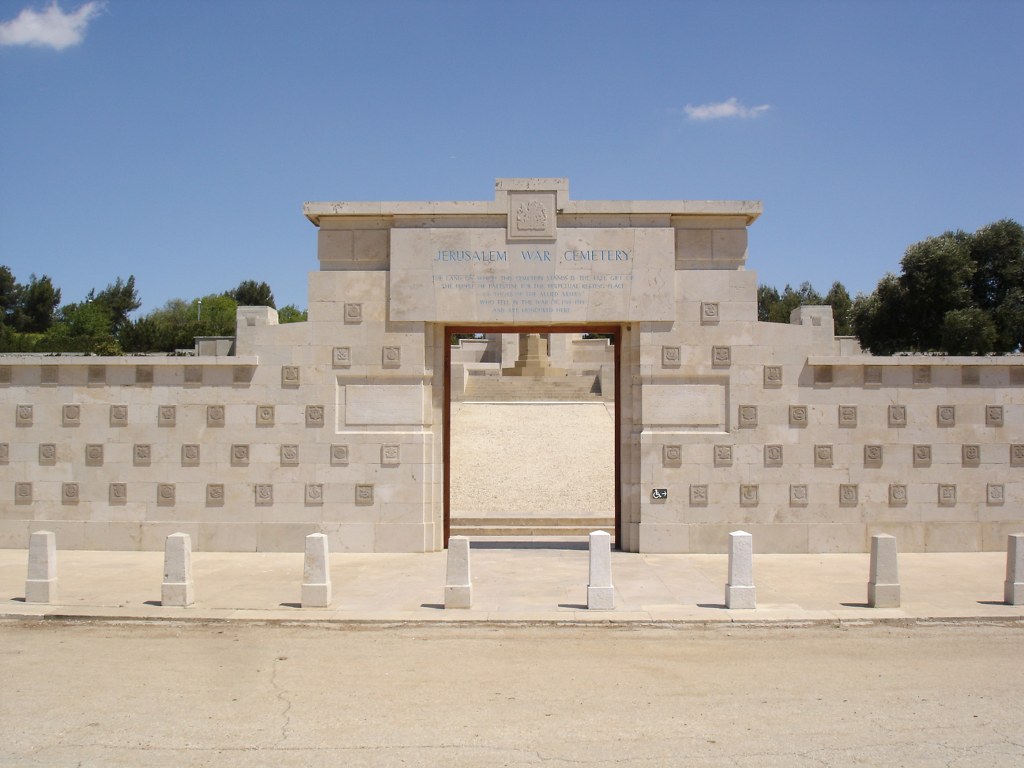 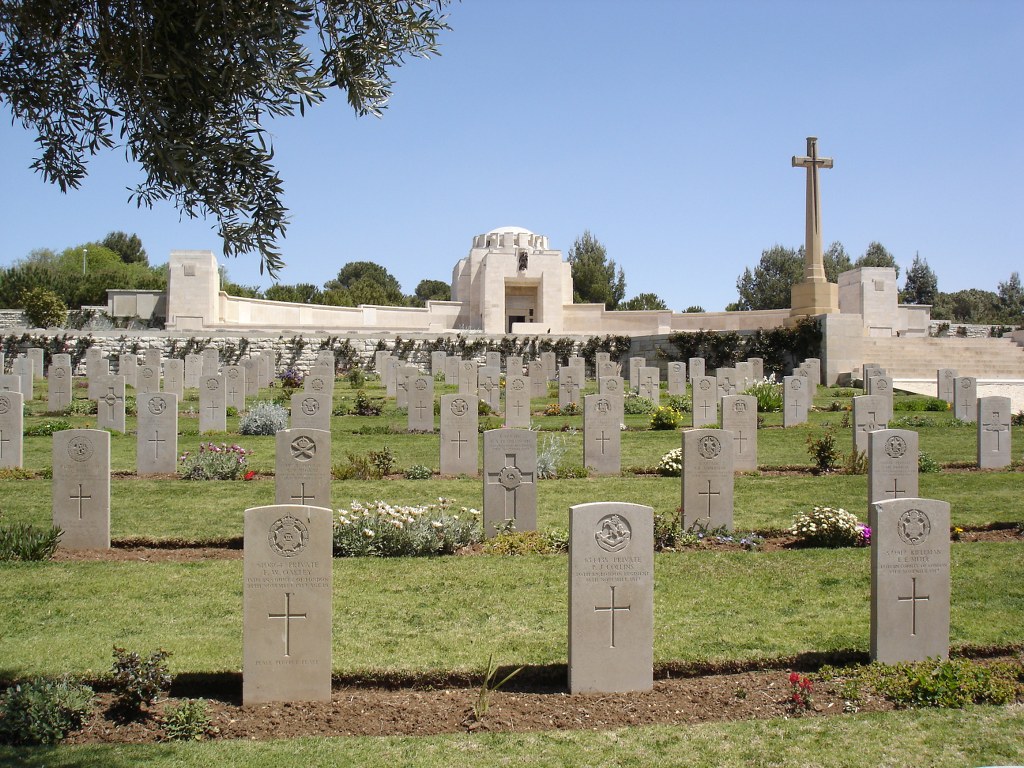 Jerusalem War Cemetery is 4.5 kilometres north of the walled city and is situated on the neck of land at the north end of the Mount of Olives, to the west of Mount Scopus. The cemetery is found on Churchill Blvd, next to the Hadassah Hospital. The Australian Memorial is opposite the cemetery entrance.

The Cemetery is permanently open and may be visited at any time. Robert Anning Bell's mosaic, commissioned by the New Zealand Government to honour its forces that took part in the operations in Sinai and Palestine, can be seen in the Memorial Chapel. This is opened by appointment only, but unfortunately due to its design, it is not accessible to wheelchair users.

JERUSALEM WAR CEMETERY was begun after the occupation of the city, with 270 burials. It was later enlarged to take graves from the battlefields and smaller cemeteries in the neighbourhood, including:-

BETHLEHEM GERMAN CEMETERY, in which one man of the Australian Light Horse was buried in June 1918.

JERICHO MILITARY CEMETERY No.1, a little South of the Jerusalem road, which contained the graves of 61 soldiers from the United Kingdom, 27 from Australia and six from New Zealand. Jericho was entered by the 1st Australian Light Horse Brigade on the 21st February 1918, and in May the 2nd/4th London Field Ambulance was stationed there.

JERICHO MILITARY CEMETERY No.2, approximately 3 kilometres South West of the town. It contained the graves of 17 soldiers from Australia, 17 from India, nine from the United Kingdom, six from the West Indies and three from New Zealand; one man of the Egyptian Labour Corps; and four German and three Turkish prisoners.

JERUSALEM PROTESTANT CEMETERY, on the side of Mount Zion. It was owned by the British and German religious communities. It contained the graves of 114 British soldiers, buried from March to December 1917, by the enemy, and then, until February 1918, by the British forces.

JERUSALEM GERMAN HOSPICE MILITARY CEMETERY, on the Mount of Olives, in which 166 British and a number of German soldiers were buried.

LIMBER HILL MILITARY CEMETERY No.1, close to a Casualty Clearing Station, near the road from Bireh to Jufna. Here were buried, in April-October 1918, 70 soldiers from India, 31 from the United Kingdom, three of the Cape Corps and one German prisoner.

RAM ALLAH MILITARY CEMETERY, where 19 soldiers from the United Kingdom and one German airman were buried from December 1917 until April 1918.

There are now 2,515 Commonwealth burials of the First World War in the cemetery, 100 of them unidentified.

There is a small Jewish Section, near Plot "N".

Within the cemetery stands the JERUSALEM MEMORIAL, commemorating 3,300 Commonwealth servicemen who died during the First World War in operations in Egypt or Palestine and who have no known grave. It was designed by Sir John Burnet, with sculpture by Gilbert Bayes. In addition, the mosaic in the Memorial Chapel was designed by Robert Anning Bell. The Memorial was unveiled by Lord Allenby and Sir James Parr on 7 May 1927.