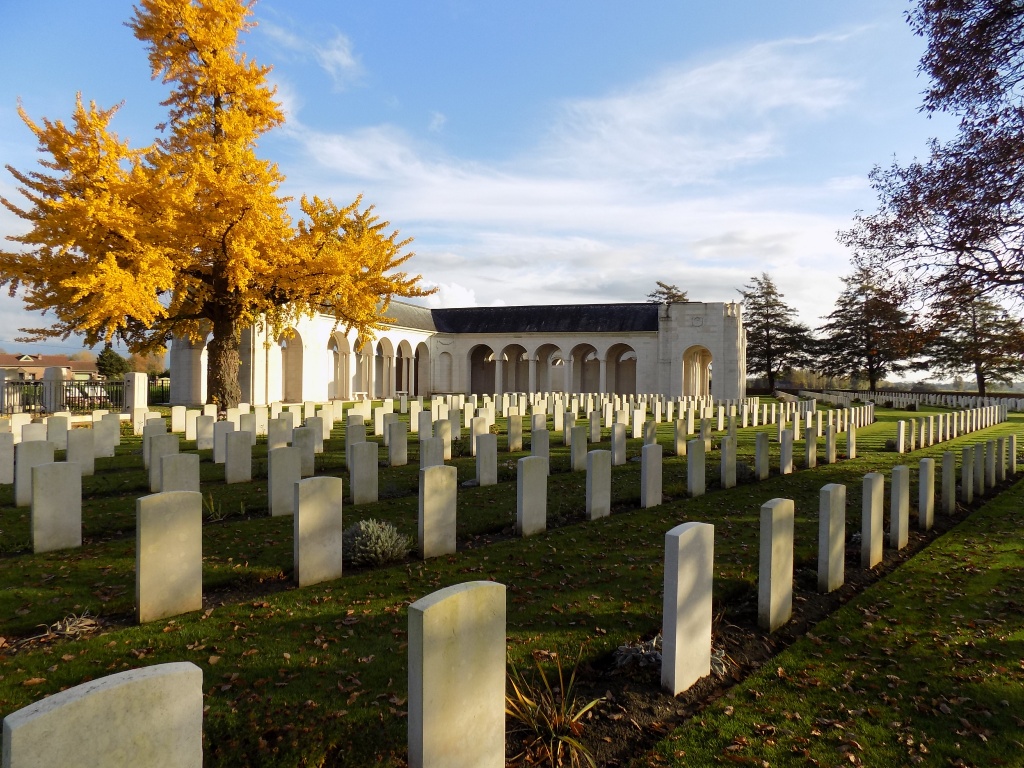 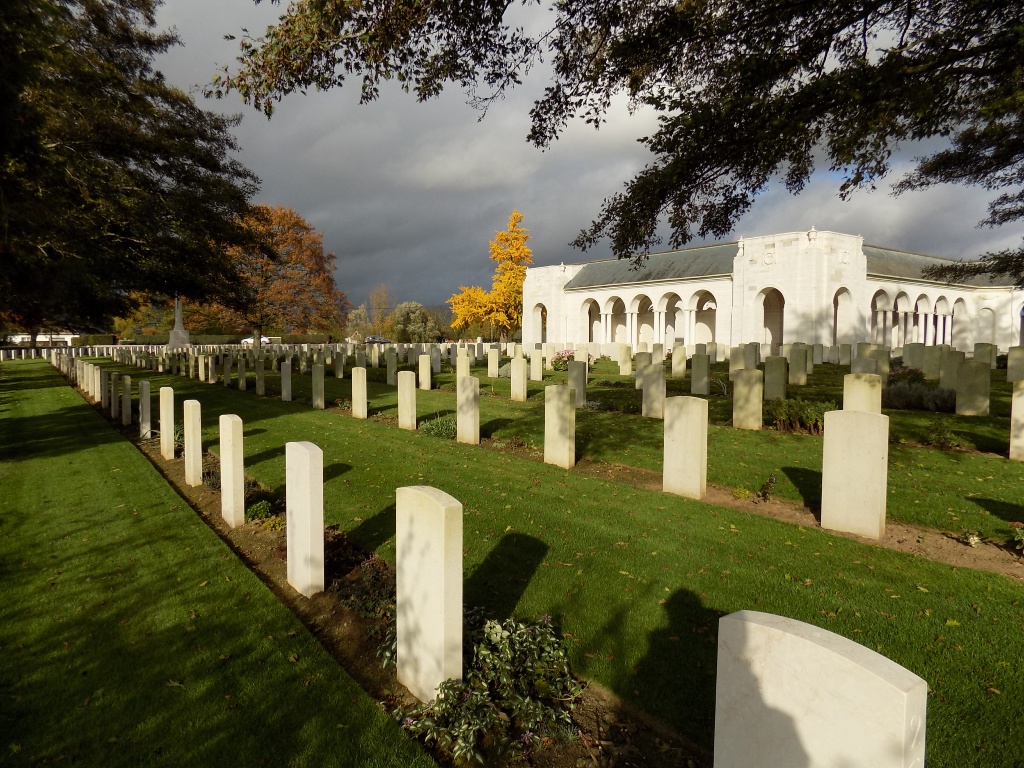 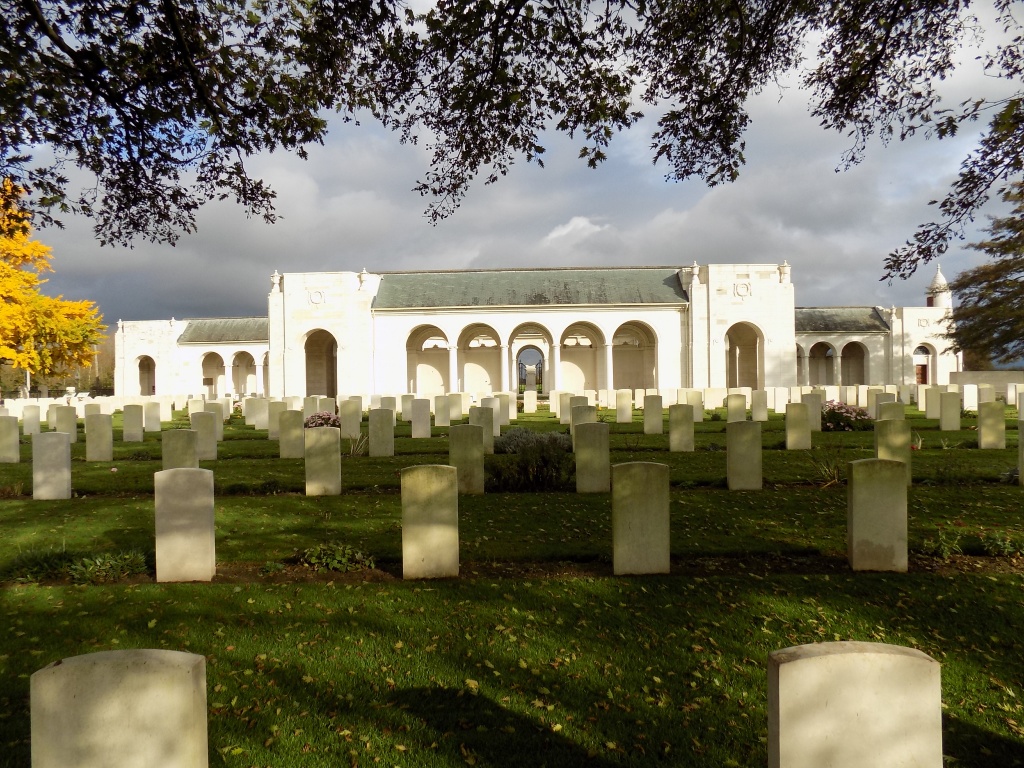 Le Touret Memorial is located at the east end of Le Touret Military Cemetery, on the south side of the Bethune-Armentieres main road. From Bethune follow the signs for Armentieres until you are on the D171. Continue on this road through Essars and Le Touret village. Approximately 1 kilometre after Le Touret village and about 5 kilometres before you reach the intersection with the D947, Estaires to La Bassee road, the Cemetery lies on the right hand side of the road. The Memorial takes the form of a loggia surrounding an open rectangular court. The court is enclosed by three solid walls and on the eastern side by a colonnade. East of the colonnade is a wall and the colonnade and wall are prolonged northwards (to the road) and southwards, forming a long gallery. Small pavilions mark the ends of the gallery and the western corners of the court.

The Le Touret Memorial commemorates over 13,400 British soldiers who were killed in this sector of the Western Front from the beginning of October 1914 to the eve of the Battle of Loos in late September 1915 and who have no known grave. The Memorial takes the form of a loggia surrounding an open rectangular court. The names of those commemorated are listed on panels set into the walls of the court and the gallery, arranged by regiment, rank and alphabetically by surname within the rank. The memorial was designed by John Reginald Truelove, who had served as an officer with the London Regiment during the war, and unveiled by the British ambassador to France, Lord Tyrrell, on 22 March 1930.

Almost all of the men commemorated on the Memorial served with regular or territorial regiments from across the United Kingdom and were killed in actions that took place along a section of the front line that stretched from Estaires in the north to Grenay in the south. This part of the Western Front was the scene of some of the heaviest fighting of the first year of the war, including the battles of La Bassée (10 October – 2 November 1914), Neuve Chapelle (10 – 12 March 1915), Aubers Ridge (9 – 10 May 1915), and Festubert (15 – 25 May 1915). Soldiers serving with Indian and Canadian units who were killed in this sector in 1914 and 1915 whose remains were never identified are commemorated on the Neuve Chapelle and Vimy memorials, while those who fell during the northern pincer attack at the Battle of Aubers Ridge are commemorated on the Ploegsteert Memorial.

In October 1914, II Corps of the British Expeditionary Force moved north from Picardy and took up positions in French Flanders where they were immediately engaged in the series of attacks and counter attacks that would become known as the ‘race to the sea’. Over the course of the next year most of the British activity in this sector focused on attempting to dislodge the German forces from their advantageous position on the Aubers Ridge and capture the city of Lille, a major industrial and transport centre which the Germans had occupied early in the war. The ridge is a slight incline in an otherwise extremely flat landscape from which the Germans were able to observe and bombard the British lines. Following the British capture of the village of Neuve Chapelle in March 1915, the Germans greatly strengthened their defences along the ridge, reinforcing their positions with thick barbed wire entanglements, concrete blockhouses and machine gun emplacements. These extra defences frustrated British attempts to break through enemy lines and led to very heavy casualties at the battles of Aubers Ridge and Festubert in May 1915.

The men of the Indian Corps began burying their fallen comrades at this site in November 1914 and the cemetery was used continually by field ambulances and fighting units until the German spring offensive began in March 1918. Richebourg L’Avoue was overrun by the German forces in April 1918, but the cemetery was used again in September and October after this territory was recaptured by the Allies. Today over 900 Commonwealth servicemen who were killed during the First World War are buried here.