We have around 2000 volunteers stationed across the UK. Our team carry out a variety of different tasks on our behalf, from inspecting headstones are part of our Eyes On, Hands On team, or engaging the public through our Speakers Programme and local tour guides.

We've asked some of our team members to talk about their favourite parts of being a CWGC Volunteer. 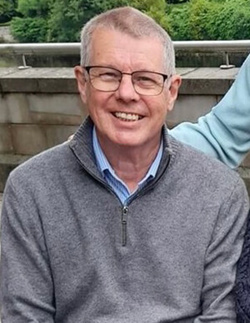 I was already aware of the work of the CWGC, but as a result of my work in support of a Great War remembrance project at Perth Academy - which led to visits to cemeteries and memorials in France and Belgium - I was able to see first-hand the amazing work that the commission do in remembering our fallen. When the commission began to advertise for volunteers to help them with their work, I was delighted to offer my services as a volunteer researcher and member of the Kantor Speakers Programme.

The pandemic has made travel difficult, but in a way, this has helped us to focus on the many beautiful sites closer to home, which have perhaps been a little overlooked. Throughout the pandemic CWGC have been really innovative in coming up with many initiatives to help us to stay engaged with their work despite the restrictions: Share Your Tribute; War Graves Week; Wildflower Gardens; Remembrance Is; In The Footsteps Of Our Forces and Remembered Here, to name just a few.

My personal highlight was being given the opportunity to assist my local Public Engagement Co-ordinator Patricia Keppie with a tour of the CWGC plot at Dunfermline (Douglas Bank) Cemetery during Heritage Open Days/ Doors Open Days. The opportunity to share the stories and keep their memories alive was such a wonderful experience. The absolute highlight of the tour for me was meeting the descendants of Andrew Izatt, who had travelled a total of 230 miles from Plockton in Wester Ross and St Andrews in Fife to join us and share the memories of Andrew which had been handed down from their mother/ grandmother. Quite a day! 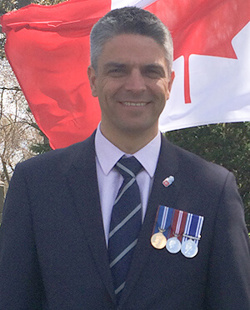 I’ve had a deep family connection to the Commonwealth War Graves Commission since I was a child. My Great Grandfather, Pte James Gammack, Scottish Rifles is commemorated at Sunken Road Cemetery, Fampoux, just outside Arras, France and it is a site I visited many times both with my parents and later with my own family. The continued remembrance of my Great Grandfather and his comrades has been important to me.

In 2017, I was fortunate to attend the rededication ceremony of another relative Gunner Ian Hector Stephen, Canadian Field Artillery whose grave in Toronto had been identified as part of the ‘In from the Cold’ project having died of illness in 1918. Having been very familiar with the care and dedication of the CWGC at our sites in France I was equally impressed with the care and attention shown in arranging the placing of a Commission headstone on his grave many thousands of miles away.

Volunteering with the CWGF is my way of giving something back and I really enjoy being able to tell the stories of men and women like James and Ian. Its personally very rewarding being able to play a small part in maintaining the flame of remembrance for future generations and showcasing the continued work of the commission. 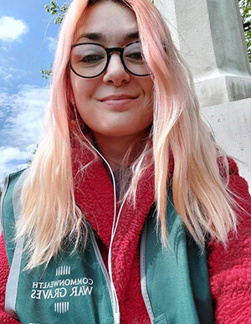 The CWGC has been important to me for a long time, after discovering my Great-Great-Uncle was commemorated by the Commission on Thiepval Memorial to the Missing. When I was an intern at the site years later one of my favourite things was giving tours to the visitors, sharing the stories of the missing on the memorial and even learning things from visitors about people we didn’t know yet. War Graves Week 2021 was the perfect opportunity to bring the lives of the fallen on our doorstep back into living memory, and I wanted to volunteer as a guide to help uncover the lives of those the CWGC commemorates locally so they could be shared with a new audience.

My favourite part of volunteering for the CWGC is being able to build up a background to the name on the headstone or the memorial, learning about people who have been buried locally for so long and perhaps have been forgotten by others over time. It feels like a way of bringing these people back to life and being able to share that life with people who perhaps don’t know much about the Commission’s work or simply want to learn more about who is remembered at these sites feels incredibly special. 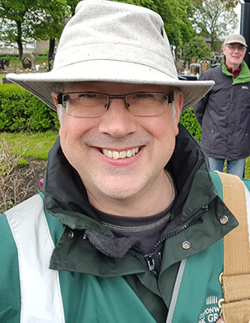 My volunteering with the Commission started back in 2016 - organising a War Graves day in our local cemetery during the CWGC "Living Memory" project. The public reaction to this was phenomenal, and the event started so many balls rolling including the founding of our local Cemetery Friends volunteer Group. It’s an honour now to be volunteering for the CWGF as part of their Speaker and Tour Guide programme, I am also chipping in with the Eyes On, Hands On reporting. Along the way I have made so many new friends and discovered a lost Bradford Pal in my family, now buried in the stunning CWGC Pozieres Cemetery on the Somme.

Since the start of this year the Speaker programme has kept me busy presenting to a wide variety of local groups. The year started purely online, presenting the Commission’s work to the local Air Cadet Squadron. Now we can present in person, and it makes a huge difference in the experience for both the audience and the speaker. I recently got the opportunity to present our Gardening the Globe talk which discusses the horticulture and history, and it’s great to see people’s enthusiasm for this work and the ‘unseen’ sides of the global mission.

During May we had the national War Graves Week 2021 – I had the pleasure of tour guiding 6 groups around our beautiful eleven-acre Grade II listed Cemetery in Pudsey. Our tours covered the Commission’s principles and history, explained what War Graves are and how they are managed. It’s fantastic to be able to represent the Commission and share these poignant and very important life stories, some I’ve been researching for the last 8 years. My favourite memory of this was having members of RAF Reserve Sergeant Stanley Coates’ family present and sharing in the recollection of his short life. It was humbling to see them still loving and being proud of their fallen relative, and in the end if your name is still spoken you are not forgotten.

Discover more about our volunteer roles

There are a number of volunteer roles to suit different skill sets and interests. Check back on a regular basis to see if there's anything that suits you.