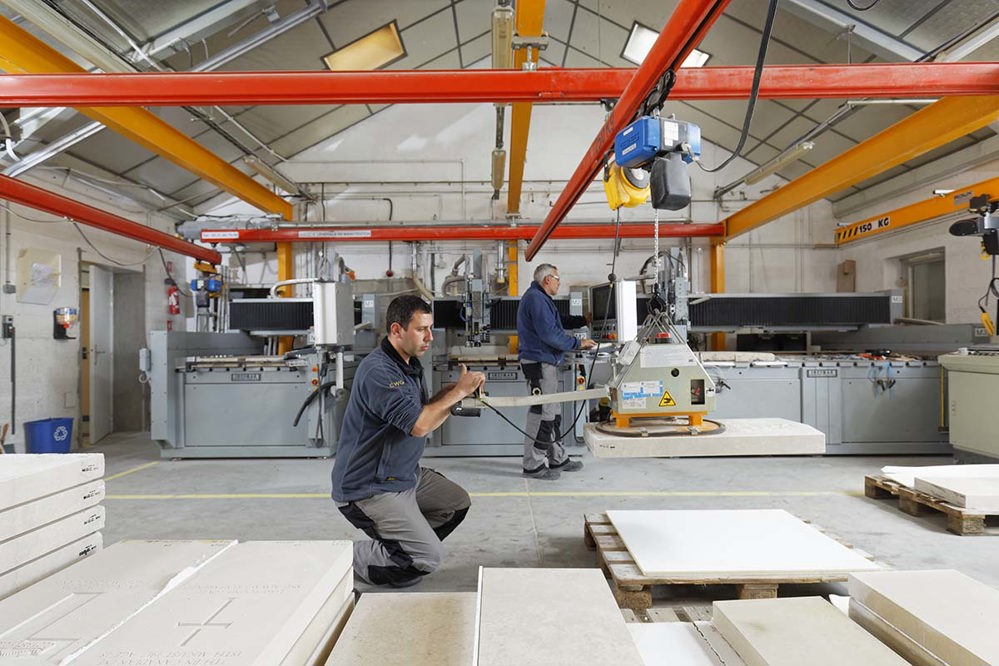 The CWGC Visitor Centre is a unique new visitor attraction in Beaurains, near Arras in France that shines a light on the work of the remarkable organisation at the heart of remembrance of the war dead. For the first time, visitors will be able to take a look behind-the-scenes at the work that is needed to commemorate the Commonwealth casualties from the First and Second World Wars.

Our free audio guide will walk you through each aspect of the work we do: from the story of how we still recover and rebury the dead today, to the skilled artisan craftsmen at work maintaining the world's most impressive and recognisable war monuments and memorials, a trip to the battlefields of the Western Front is not complete without a visit to the CWGC Visitor Centre.

The CWGC Visitor Centre was awarded the Best Tourism Project in Europe at the 2019 British Guild of Travel Writers’ International Tourism Awards. The BGTW is a community of accredited writers, photographers and broadcasters and the trusted body for independent editorial comment and expert content on worldwide travel. 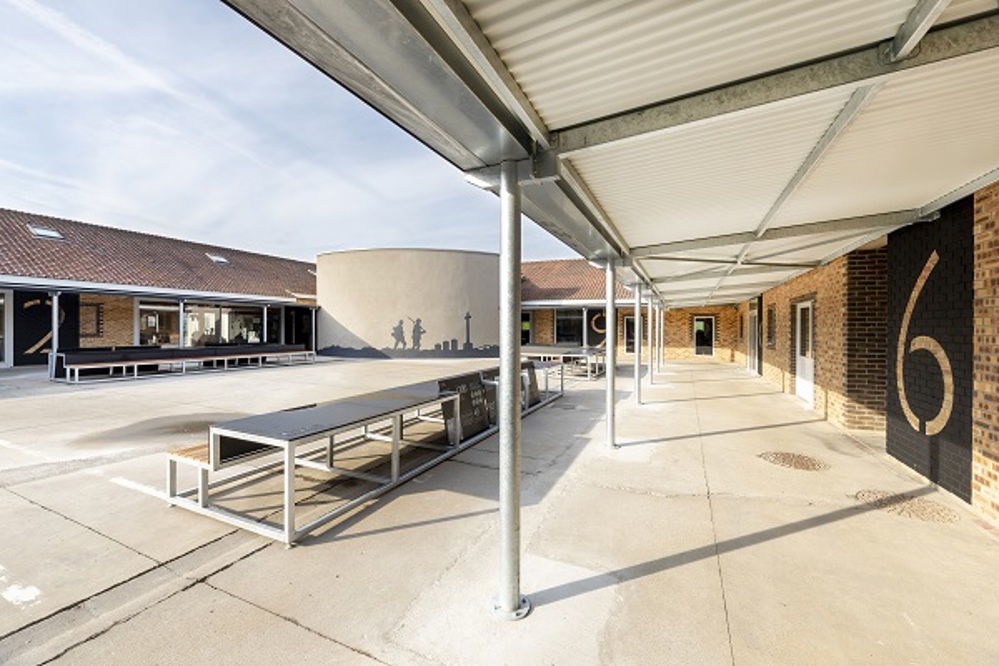 RECOVERY AND REBURIAL
There are, on average, 40 discoveries of World War remains every year. This is one of the most vital areas of our work, and one of the most interesting. Our staff in France play an integral role in the recovery process, now you can see how it happens.
MAINTENANCE TEAMS
Managing 23,000 sites worldwide requires a large, dedicated maintenance team. You’ll see some of the work our teams do on a daily basis and learn about some of the challenges they face day-to-day.
MASONS, CARPENTERS AND BLACKSMITHS
Between headstones, monuments, and memorials, the CWGC relies on a highly skilled team to produce the iconic sights you see at our war cemeteries. Now you can get a first-hand look at some of our master craftsmen at work. 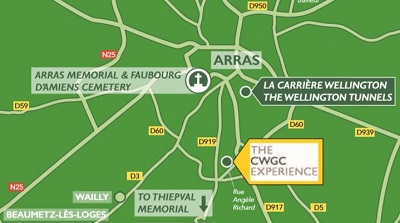 Located in the heart of the battlefields of the First World War, The CWGC Visitor Centre is an easy drive away from some of the most recognisable French war graves and locations on the Western Front.

Download our map and visit some of the key cemeteries and war memorials in France.

It commemorates over 72,000 men of British and South African forces who died in the Somme sector.

The CWGC Visitor Centre is closed at weekends and on French public holidays. From the beginning of December to the end of February, the Centre will only be open for groups on bookings.

Please note that the centre will also be closed for public holidays from 7th-10th April, from 12th-15th August and 13th November.

Toilets, a gift shop and vending machines are available at the centre.

The CWGC Visitor Centre is open to all and we strive to ensure that all of our visitors can enjoy as much of our centre as possible.

Entry to the CWGC Visitor Centre is free and free parking is provided for all vehicles with fewer than 12 seats.

We have limited parking for larger vehicles and 12-seaters and above must book in advance of their visit.

Are you planning to visit as part of a group? All coach bookings must be made in advance of your visit.

The CWGC Visitor Centre is located just south of Arras, in the Hauts de France region, the heart of the First World War battlefields. The centre is only an hour from the channel ports and is easily reached by car (public parking is available on site). There are good rail links to Arras. Our address is:

You can get to us:

From Lille or Paris: direct access from the A1 motorway (exit 15) onto the D939.

From Calais: take the A26 to Saint-Quentin. Exit 7 to Arras-Centre onto the D917.

Eurostar from London to Lille with good connections from Lille to Arras. TGV from Paris to Arras.

About the war graves around Arras, France

How many war graves are there in France?

There are more than 700,000 commonwealth casualties of the two world wars commemorated on our war memorials and in our cemeteries across France.

Many of the burials are in our large CWGC cemeteries like Etaples Military Cemetery, Bayeux War Cemetery and Cabaret-Rouge British Cemetery, but a large number are buried in groups of ones and twos in local churchyards and burial grounds near to where they died.

How many British war graves are in France?

There are more than 475,000 British casualties of the two world wars commemorated by the Commonwealth War Graves Commission at cemeteries and memorials in France. More than 440,000 of these casualties lost their lives during the First World War, while the remaining 35,000 died during the Second World War.

Which are the best war graves to visit in France?

Today we have cemeteries and memorials across France, commemorating the men and women of the Commonwealth who died on French soil during both world wars.

From the border with Belgium down to the border with Switzerland, the trenches of the Western Front cut a bloody path through France. You can find war graves at our cemeteries along the front lines. Here are some you might be interested to visit:

Faubourg D’Amiens Cemetery is found in the town of Arras, in the Pas de Calais department of France, close to the CWGC Visitor Centre in Beaurains.

It was formed in March 1916 adjacent to a large French military cemetery, and was used throughout the war. The cemetery was further extended after the war as casualties were brought from smaller burial sites in the region.

Etaples was home to the principle staging post and transport depot, due to its position on the coast and proximity to the important ports of Calais and Boulogne, as well as vital rail links with the front lines. Due to its position away from the fighting, It was home to as many as eleven hospitals during the war.

The casualties buried here were either evacuated from the front lines for medical care and later died of their wounds, died in transit or were brought to the cemetery after the war from other burial sites. 119 Second World War burials can also be found here.

Vis-en-Artois sits on the main road between Arras and Cambrai, and was occupied by the German forces from September 1914 until its liberation in August 1918.

Vis-en-Artois, and nearby Haucort, were taken by the Allied forces during the Battle of the Scarpe, part of the Hundred Days offensive which paved the way to the end of the war in Europe.

The cemetery itself was formed immediately after the capture of the region, and was used until the middle of October, with nearly 300 Canadian burials and 55 British burials there. Following the end of the war, the cemetery was enlarged and used for the burials of nearly 2,400 World War One soldiers from other sites, including men from The United Kingdom, Canada, Australia, South Africa and Germany. Nearly 1,500 of the burials here remain unidentified.

War returned to France with the German invasion of 1940, and was the site of some of the most well known battles of the war. Discover more about finding war graves from World War Two.

One of the most famous World War Two battles in France was Operation Overlord - the invasion of Normandy.

On 6 June 1944, a combined Allied force launched the largest naval invasion ever seen against five Normandy beaches: Gold, Sword, Omaha, Utah and Juno. While the invasion was a success, the fighting on the beaches and the push into the calvados countryside cost thousands of lives on both sides.

The first French town to be liberated following the invasion was the historic town of Bayeux, which became the site of the Bayeux War Cemetery, where more than 4,000 Commonwealth war dead are buried, as well as about 500 war graves of other nations, the majority German.

The cemetery is home to the Bayeux Memorial, which bears the names of 1,800 men of the Commonwealth land forces who died during the invasion and in the early days of the campaign and who have no known grave.

Another of the most well known actions of World War Two in France was the evacuation of Dunkirk.

Following the declaration of war in 1939, the British Expeditionary Force was sent to help defend France and Belgium from an expected German invasion. The invasion came in May 1940, and the German Blitzkrieg - lightning war - overwhelmed the defenders, pushing them back to the French coast.

Against such a formidable attack, the British, Belgian and French armies were pushed back to the French coast, and the decision was made to evacuate as many men as possible to avoid their capture or destruction. The port of Dunkirk, in the Hauts-de-France region of France was chosen for the evacuation.

The combined efforts of the Royal Navy and the famed ‘little ships’ to evacuate the soldiers, the efforts of the RAF to prevent German bombing raids, and multiple rear-guard actions to delay the advancing Germans, meant that nearly 340,000 Allied troops were evacuated from the European mainland.

Dunkirk Town Cemetery is the final resting place of nearly 800 World War Two war casualties, of which more than 200 are unidentified. The cemetery is also home to the Dunkirk Memorial which commemorates more than 4,500 Commonwealth war dead who died in France in 1939 and 1940 and who have no known grave.

Operation Jubilee, the raid on Dieppe by a predominantly Canadian Allied Force, was one of the most costly operations of the Second World War.

Although a naval landing on the French coast, Operation Jubilee was not a full invasion. Instead, its objectives were to capture the port of Dieppe, destroy important military targets in the area, gather vital intelligence at the same time, and then to depart.

Instead, the invading force found well prepared defences, and more than half were killed, captured, wounded or missing by the time the raiding forces withdrew. The heavy losses taught the Allies valuable lessons that would later influence the planning and eventual success of the invasion of Normandy.

Nearly 1000 of those who died during Operation Jubilee are today buried at Dieppe Canadian War Cemetery, the vast majority of whom are Canadian.

Subscribe to the CWGC newsletter and get stories, news and events straight to your inbox
Sign up now