More than half a million men and women who died in World War One are commemorated on our memorials to the missing around the world. Our WW1 Memorials in France are some of our most well known, commemorating service personnel from across the Commonwealth. Read on to discover more about these iconic sites. 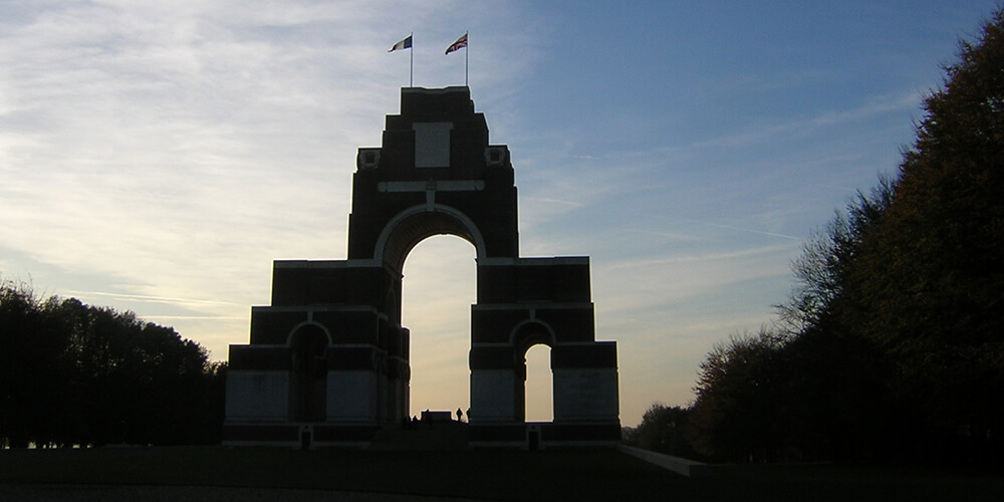 How many WW1 war memorials does France have?

There are more than 20 memorials to the missing in France, ranging from our largest, Thiepval Memorial which commemorates more than 72,000 missing casualties, to one of our smallest, Marfaux (New Zealand) Memorial, which commemorated just 10 members of the New Zealand Cyclist Battalion.

There are also large numbers of cremation memorials and special memorials that commemorate the war dead in a different way. Cremation memorials are a point of commemoration for those that were cremated, often in accordance with their faith, and Special Memorials are used to mark burials of identified soldiers who’s burials cannot be marked in the regular manner.

Where are the WW1 war memorials in France?

If you look at the locations of our French war memorials on a map, you’ll see that they roughly follow the lines of the trenches of the Western Front. The memorials were built on or close to the battlefields where those they commemorate fell.

One notable exception is the Noyelles-sur-mer Chinese Memorial which stands on the coast and commemorates 92 members of the Chinese Labour Corp who died on land and at sea.

What is France most remembered for in WW1?

Arras, Verdun, Messines, Neuve-Chapelle and Delville Wood are just some of the names that have been written into the history books thanks to the destructive battles and countless casualties of the Great War.

From the mud and blood of the Battle of the Somme, the introduction of slow, unreliable tanks and the infancy of aerial combat; the war in France and elsewhere on the Western Front will long be remembered as one of the most destructive in human history.

But the war in France will also be remembered for the acts of heroism and camaraderie by soldiers on both sides. The men who fought and died in France are honoured for their sacrifices, for lives cut short by their duty to their country. These are the men and women who are remembered at CWGC cemeteries and memorials across France. 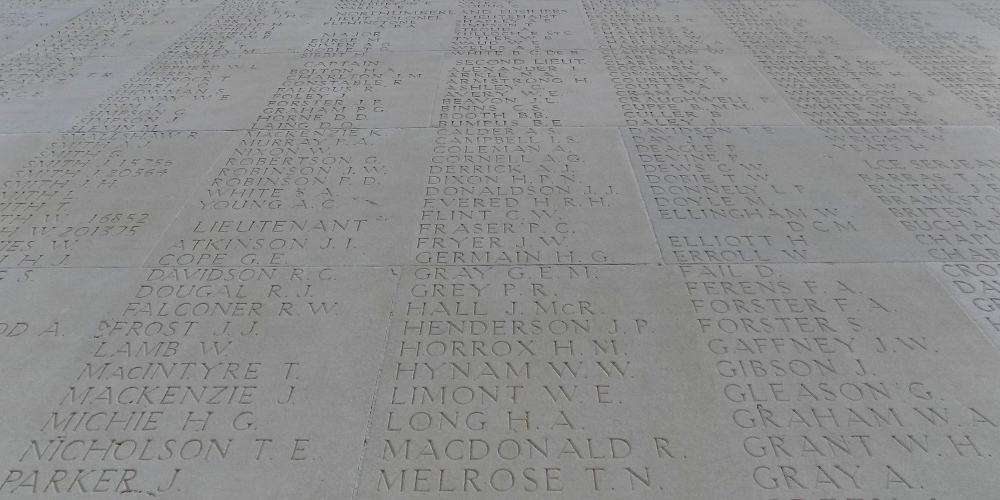 Who is commemorated on World War One memorials in France?

When you visit our war cemeteries, you’ll find a large number of unknown war graves in France. These are soldiers who died in battle and who could not be identified and are instead commemorated on our memorials.

Today, there are more than 200,000 World War One Commonwealth casualties of the Great War commemorated on our memorials to the missing in France.

The men and women listed on our memorials in France came from across the Commonwealth, many out of a sense of duty, others through conscription. They are united by the sacrifice they made despite how different they were from one another.

Now they are commemorated equally, teenagers alongside fifty year olds, officers and men together.

Thiepval Memorial to the Missing of the Somme is one of the most famous war memorials in the world. Designed by Sir Edwin Lutyens it was unveiled in 1932 and commemorates more than 72,000 Officers and men of the British and South African armies who died in the region and who have no known grave.

The men commemorated here died during the Battle of the Somme. The battle lasted from 1 July 1916 to November of that year and cost an incredible number of lives. The opening day of the battle is the worst in British military history, such was the sheer number of deaths.

Thiepval itself was one of the main objectives of the battle, although it wasn’t captured until the end of September. Throughout the battle, Allied forces faced incredible opposition from resilient German defenders and inclement weather, which made rapid advance all but impossible.

The memorial was built on Thiepval ridge, overlooking the battle field, and acts as a joint Anglo French memorial in recognition of the alliance between the two nations on the Western Front and the rest of the war.

The Canadian National Vimy Memorial stands atop Vimy Ridge, the site of one of the most famous Canadian actions of the war. The capture of the ridge itself was a huge tactical achievement, its height allowing unobstructed views across the surrounding landscape but held additional importance as the first time the four Canadian divisions of the Canadian Corps had fought together.

The memorial itself is one of the most striking. Twin pillars rise from a stone base, adorned with statues and carvings, such as the maple leaf and fleur-de-lis which decorate the pillars and represent the unity and sacrifice of both Canada and France.

Fought in northern France between 10-13 March 1915, the Battle of Neuve Chapelle was the first planned offensive by the British Army on the Western Front. Nearly 40,000 British, Canadian and Indian troops took part. This was also the first battle where the Indian Corps fought its first major action as a single unit.

The battle began in the early hours of 10 March with a heavy artillery bombardment from hundreds of guns. When the artillery fire lifted, the infantry assault commenced with the Indian battalions in the lead. The assaulting battalions managed to break through German lines and into the village of Neuve Chapelle, fighting from house to house. By 9am Neuve Chapelle had been secured, but communications difficulties made it difficult to capitalise on this success.

Neuve Chapelle was captured but this victory had been limited and came at the cost of heavy casualties. More than 11,000 were killed, wounded or missing, including around 4,200 from the Indian Corps. The British line had advanced around 1,000 yards on a front of two miles, but severe losses had also been inflicted on the Germans.

The Neuve Chapelle Memorial was built by the CWGC on ground where Indians fought in March 1915. It honours the efforts of the Indian Army across the Western Front and commemorates some 4,700 soldiers and labourers who died in France and have no known grave.

The early stages of the war were very positive for the German Army. By the start of September 1914, they had taken a large part of Belgium and their advance through France had put them within touching distance of Paris.

The British and French forces protecting the capital had to act, and a counter attack was begun on 5 September, known as the Battle of the Marne. On 8 September, British troops encountered a strong enemy presence at La Ferte-sous-Jourre, where the German army had established a crossing over the Marne.

British troops made an assault on the town. In their retreat, the German forces destroyed the two bridges over the river, delaying the attack as the Royal Engineers constructed a floating bridge in their place to continue the pursuit. As a result of the Battle of the Marne, the German advance was stunted - Paris was saved, but the years of trench warfare were only just beginning.

La Ferté-sous-Jouarre Memorial in France commemorates some 3,740 British servicemen who died serving with the BEF in August, September and early October 1914, who have no known grave.

The New Zealand division landed in France in September 1916, and joined the front line between Delville Wood and High Wood - thrusting them into action in the Battle of Flers-Courcelette, one of the battles of the Somme offensive.

By the time the New Zealand Division was relieved on 4 October, they had advanced three kilometres, suffering more than 7,000 casualties. Caterpillar Valley Cemetery contains more than 5,500 Commonwealth burials, many brought in from smaller cemeteries and burials in the region. In it stands Caterpillar Valley (New Zealand) Memorial, which commemorates more than 1,200 officers and men of the New Zealand Division who died in the Battles of the Somme in 1916 and who have no known grave.

While the opening day of the Battle of the Somme is recognised as one of the worst in British Military history, it was also devastating for the Newfoundland Regiment.

Beaumont-Hamel Newfoundland Memorial stands among the preserved trenches of Beaumont-Hamel Memorial Park, marking the sacrifice of those who fell on the opening day of the Somme.

The striking memorial includes a bronze caribou, standing sentinel on a rocky outcrop  overlooking the battlefield. It lists the names of 800 servicemen of Newfoundland who have no known graves, including some 220 members of the Newfoundland Royal Naval Reserve and Mercantile Marine lost at sea.

What is the biggest WW1 memorial in France?

Thiepval Memorial to the Missing of the Somme is the largest CWGC WW1 Memorial in France - and the largest anywhere in the world.

Our five largest WW1 memorials in France are:

How to search for French WW1 memorials

If you are planning a visit to the CWGC sites in France, the best way to plan a trip is to use the tools on our website. You’ll be able to find war memorials and cemeteries across France and the rest of the world, with historical and visitor information to help you plan your trip.

The perfect starting point when visiting the cemeteries and memorials of the Western Front.

No trip to the Western Front would be complete without seeing our visitors centre in Arras, France.