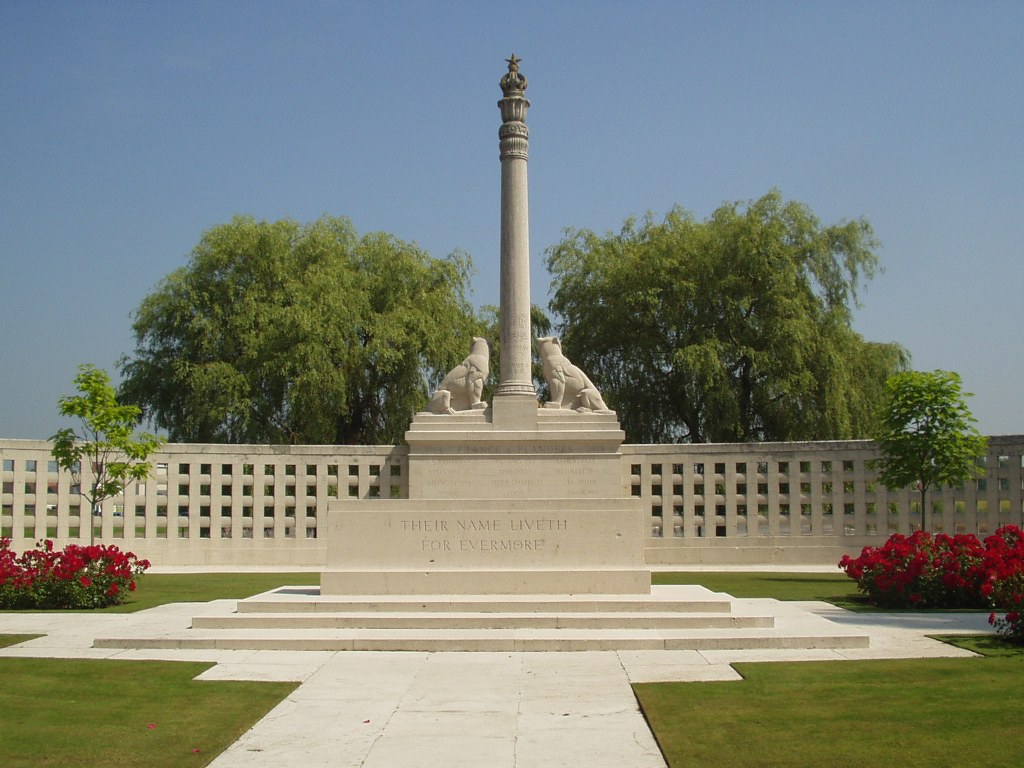 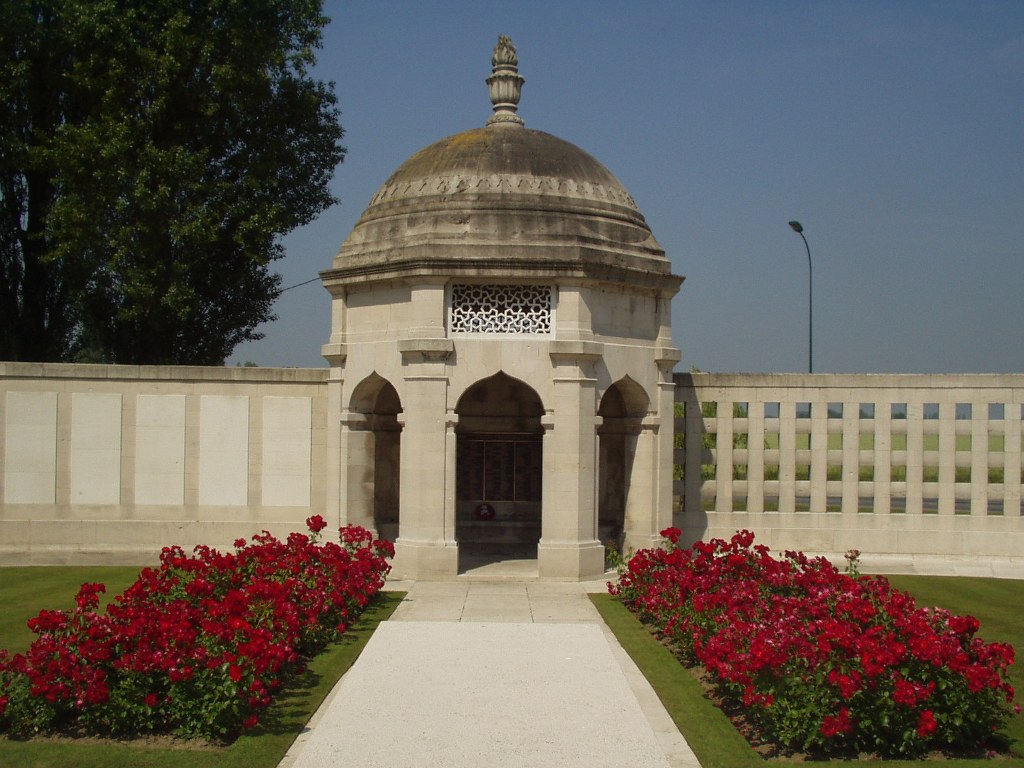 The Indian Memorial at Neuve Chapelle commemorates over 4,700 Indian soldiers and labourers who lost their lives on the Western Front during the First World War and have no known graves. The location of the memorial was specially chosen as it was at Neuve Chapelle in March 1915 that the Indian Corps fought its first major action as a single unit. The memorial takes the form of a sanctuary enclosed within a circular wall after the manner of the enclosing railings of early Indian shrines. The column in the foreground of the enclosure stands almost 15 feet high and was inspired by the famous inscribed columns erected by the Emperor Ashkora throughout India in the 3rd century BC. The column is surmounted with a Lotus capital, the Imperial British Crown and the Star of India. Two tigers are carved on either side of the column guarding the temple of the dead. On the lower part of the column the words ‘God is One, He is the Victory’ are inscribed in English, with similar texts in Arabic, Hindi, and Gurmukhi.

The memorial was designed by the celebrated British architect, Sir Herbert Baker, and unveiled by the Earl of Birkenhead on 7 October 1927. Lord Birkenhead, then Secretary of State for India, had served as a staff officer with the Indian Corps during the war. The ceremony was also attended by the Maharaja of Karputhala, Marshal Ferdinand Foch, Rudyard Kipling, and a large contingent of Indian veterans.

The Indian Expeditionary Force on the Western Front

The British government declared war on Germany on 4 August 1914. Just four days later two infantry divisions and a cavalry brigade of the Indian Army were ordered to mobilise and prepare for overseas service. Units of the Indian Expeditionary Force began arriving in France in September and by late October they were involved in heavy fighting on the Messines Ridge in Belgium. It was at Messines on 31 October that Khudadad Khan performed the act of gallantry for which he was later awarded the Victoria Cross, becoming the first Indian born soldier to be so honoured. The Indian Corps, which was composed of the 3rd (Lahore) and 7th (Meerut) divisions, went on to fight in some of the bloodiest battles of the first year of the war. At Neuve Chapelle, from 10 – 13 March 1915, Indian soldiers made up half of the attacking force and despite suffering very heavy casualties succeeded in capturing important sections of the German line. The officers and men of the Corps further distinguished themselves at St. Julien in the Ypres Salient in April 1915, at Aubers Ridge and Festubert in May, and at Loos in September before being redeployed to the Middle East in December. The Indian Cavalry Corps remained on the Western Front until the spring of 1918 and Indian labour companies, which had begun arriving in France in 1917, performed vital and often dangerous logistical work behind the lines until after the Armistice.

Over the course of the war, India sent over 140,000 men to the Western Front – 90,000 serving in the infantry and cavalry and as many as 50,000 non-combatant labourers. They hailed from the length and breadth of British India: from the Punjab, Garwahl, the Frontiers, Bengal, Nepal, Madras, and Burma, and represented an extremely diverse range of religious, linguistic, and ethnic cultures. The officer corps was composed mostly of men of European descent. Of the combatants, over 8,550 were killed and as many as 50,000 more were wounded. Almost 5,000 of the dead have no known grave and are commemorated on the Menin Gate at Ieper and here at Neuve Chapelle.

In 1964 a Special Bronze Panel was added to this memorial with the names of 210 servicemen of undivided India who died during the 1914-1918 war, whose graves at Zehrensdorf Indian Cemetery, Germany, had become unmaintainable. Although this plaque still exists, the graves were reinstated in 2005.

This site also contains the Neuve-Chapelle 1939-1945 Cremation Memorial. In 1964 the remains of 8 Indian soldiers (including 2 unidentified) were exhumed from Sarrebourg French Military Cemetery Extension and cremated. The names of the 6 identified soldiers are engraved on panels at the Neuve Chapelle Memorial along with the following inscription:

IN HONOUR OF THESE SOLDIERS WHO DIED IN CAPTIVITY IN NORTH-WEST EUROPE AND WHOSE MORTAL REMAINS WERE COMMITTED TO FIRE.

* 39 members of the 1914-1918 Indian Forces commemorated here were cremated at Patcham Down, Sussex. In 2010, their point of commemoration was transferred back to Patcham Down when a new memorial was unveiled there.