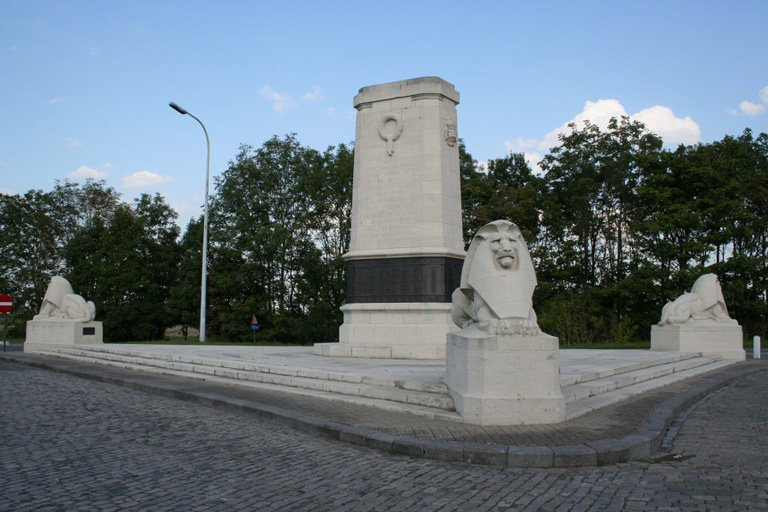 Nieuport (now Nieuwpoort) is a town in the Province of West Flanders on the south-west side of the River Yser, 3 kilometres from the sea. The Nieuport Memorial is on a site where the road to Lombardsijde joins the road from Nieuport dock. It is located partly along the "Sluizenring" and partly along the "Westendelaan". The Memorial takes the form of a pylon of Euville stone, 8 metres high, surrounded by a bronze band on which are cast the names of the casualties commemorated. It stands on a triangular paved platform, and at each corner of the triangle is the recumbent figure of a lion facing outwards.

The names on the memorial are recorded by Regiment, then by Rank and then alphabetically.

The Nieuport Memorial commemorates 552 British officers and men who were killed in Allied operations on the Belgian coast during the First World War and have no known grave. Twenty of those commemorated served with the Royal Naval Division and were killed or mortally wounded during the siege of Antwerp in October 1914. Almost all of the remainder fell in heavy fighting in the region of Nieuport in the summer of 1917. The memorial is constructed of Euville limestone and stands eight metres high. It was designed by William Bryce Binnie, an Imperial War Graves Commission architect who served with The Black Watch during the war and was twice decorated for bravery. The lions standing at each point of the triangular platform were designed by Charles Sergeant Jagger, a celebrated British sculptor and decorated veteran of the Western Front. The memorial was officially unveiled by Sir George Macdonogh in July 1928.

British Operations on the Belgian Coast

The armies of the German Empire invaded Belgium on 4 August 1914. Within three weeks the fortified cities of Liege and Namur were in German hands and the Belgian forces had retreated to Antwerp, which was well defended and ringed by a series of forts. To begin with, the German First Army under General von Kluck bypassed the city and moved south-west toward the Franco-Belgian border. Yet on September 28, after weeks of heavy fighting in northern France, German artillery batteries began to shell the outer forts from the south-east. The accuracy of the German long-range guns had a devastating effect on the defences of the outer forts, and by the beginning of October the German infantry was slowly closing in on the city.

Fearing that the fall of Antwerp would expose the channel ports and leave Britain vulnerable to attack, the British deployed the newly formed Royal Naval Division to assist their Belgian allies in defending the city. The first British reinforcements, a brigade of Royal Marines, arrived at Antwerp on 4 October and relieved the 21st Belgian Regiment. On the following day the German forces crossed the river Nethe at Lier, 20 kilometres south of Antwerp. Two more British naval brigades arrived at Antwerp early on 6 October, yet while their arrival lifted the morale of the soldiers and civilians in the city, they could do little to alter the strategic position of the Belgian garrison, which was now critical. On the night of 6 October, the Belgian fortress troops under General Paris retired to the inner forts on the outskirts of the city, and over the course of the next day the German forces crossed the river Scheldt and began to shell the streets and houses of Antwerp. By 8 October, the Belgian Field Army had evacuated the city, which was now defended by mixed units of Belgian and British troops. The first German troops entered the city, following heavy shelling, on 9 October and the siege was at an end.

British units did not return to this sector of the Western Front until June 1917, when the 32nd Division relieved French troops stationed at Nieuport in preparation for planned Allied landings on German-held territory along the Belgian coast. German marines launched a pre-emptive attack against the British forces on the river Yser in July and the landings, codenamed ‘Operation Hush’, never took place. Over 260 men commemorated on the Nieuport Memorial were killed or mortally wounded during heavy fighting with units of the German Marine-Korps Flandern on July 10 1917.