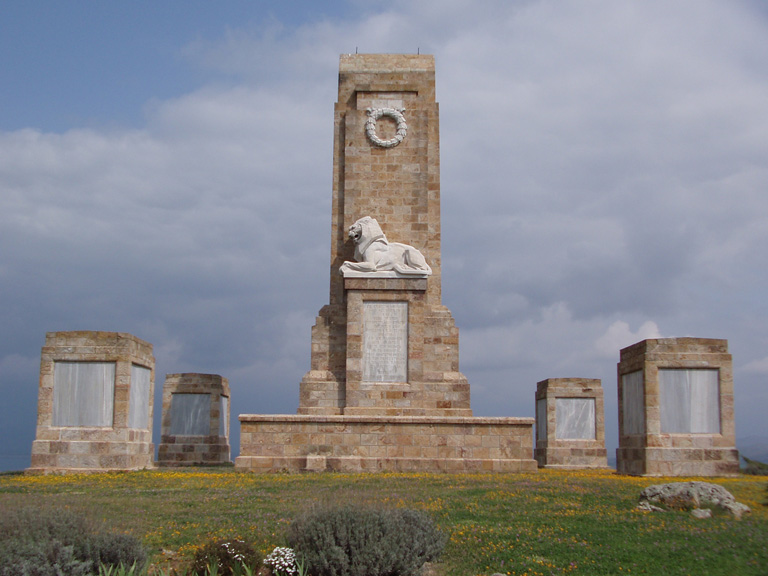 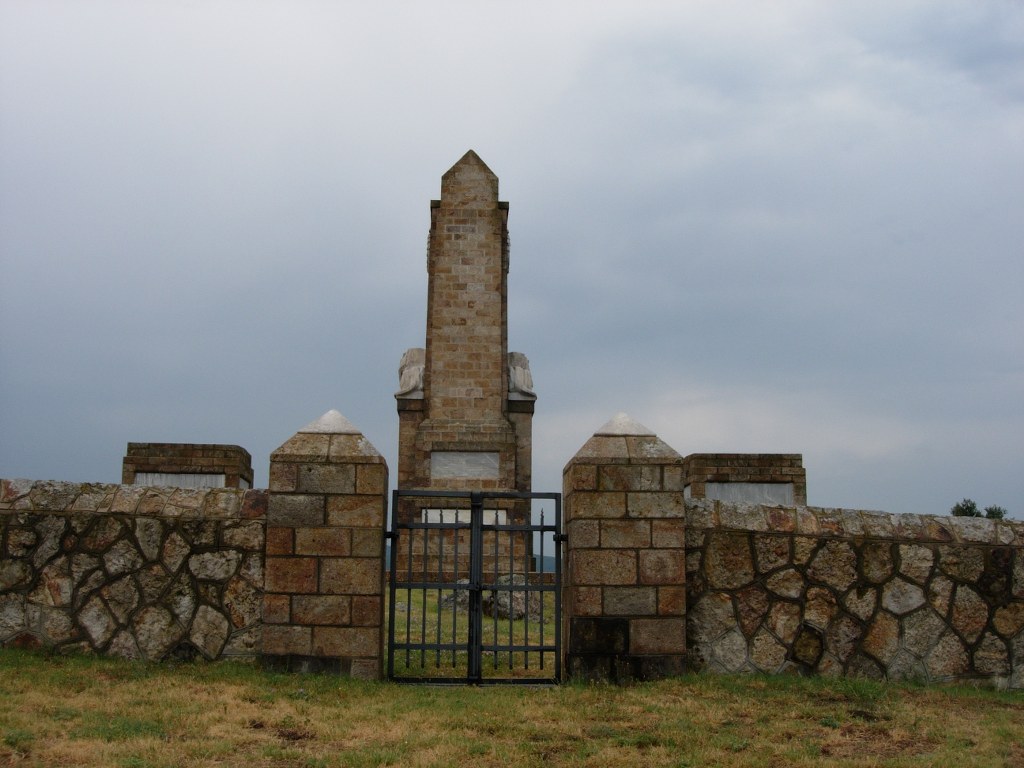 The Doiran Memorial stands near Doiran Military Cemetery, which is situated in the north of Greece close to the Macedonia border and near the south-east shore of Lake Doiran. It is approximately 3 kilometres north west of Drossato village behind and to the west of Doirani village and is reached via a farm track. From Thessaloniki take the Thessaloniki – Kilkis National Road north for approximately 70 km following the directions for the town of Kilkis until you come to a crossroads with the town of Drossato on your right. Turn left at this crossroads following the signs for Doirani Village/Lake and Customs. Continue on this road for approximately 2 km where you shall pick up the CWGC signs on the outskirts of the village that shall lead you around the village of Doirani and to Doiran Military cemetery. Continue past the cemetery for approximately 1 km following the CWGC signs up a rough track until you arrive at the Memorial. The Memorial stands on what was called Colonial Hill, and can be seen from a distance and is a landmark.

The memorial is always open and may be visited at any time.

The DOIRAN MEMORIAL stands roughly in the centre of the line occupied for two years by the Allies in Macedonia, but close to the western end, which was held by Commonwealth forces. It marks the scene of the fierce fighting of 1917-1918, which caused the majority of the Commonwealth battle casualties. From October 1915 to the end of November 1918, the British Salonika Force suffered some 2,800 deaths in action, 1,400 from wounds and 4,200 from sickness. The campaign afforded few successes for the Allies, and none of any importance until the last two months. The action of the Commonwealth force was hampered throughout by widespread and unavoidable sickness and by continual diplomatic and personal differences with neutrals or Allies. On one front there was a wide malarial river valley and on the other, difficult mountain ranges, and many of the roads and railways it required had to be specially constructed. The memorial serves the dual purpose of Battle Memorial of the British Salonika Force (for which a large sum of money was subscribed by the officers and men of that force), and place of commemoration for more than 2,000 Commonwealth servicemen who died in Macedonia and whose graves are not known. The memorial was designed by Sir Robert Lorimer with sculpture by Walter Gilbert. It was unveiled by Sir George Macdonogh on 25 September 1926. The memorial stands near DOIRAN MILITARY CEMETERY. The cemetery (originally known as Colonial Hill Cemetery No.2) was formed at the end of 1916 as a cemetery for the Doiran front. The graves are almost entirely those of officers and men of the 22nd and 26th Divisions and largely reflect the fighting of April and May 1917 (the attacks on the Petit-Couronne), and 18-19 September 1918 (the attacks on Pip Ridge and the Grand-Couronne). In October and November 1918, after the final advance, a few burials were added by the 25th Casualty Clearing Station. After the Armistice, graves were brought into the cemetery from the battlefields and from some small burial grounds, the most important of which was Strumnitza British Military Cemetery, north-west of Doiran, made by the 40th Casualty Clearing Station in October and November 1918. The cemetery now contains 1,338 Commonwealth burials of the First World War, 449 of them unidentified. There are also 45 Greek and one French war graves.