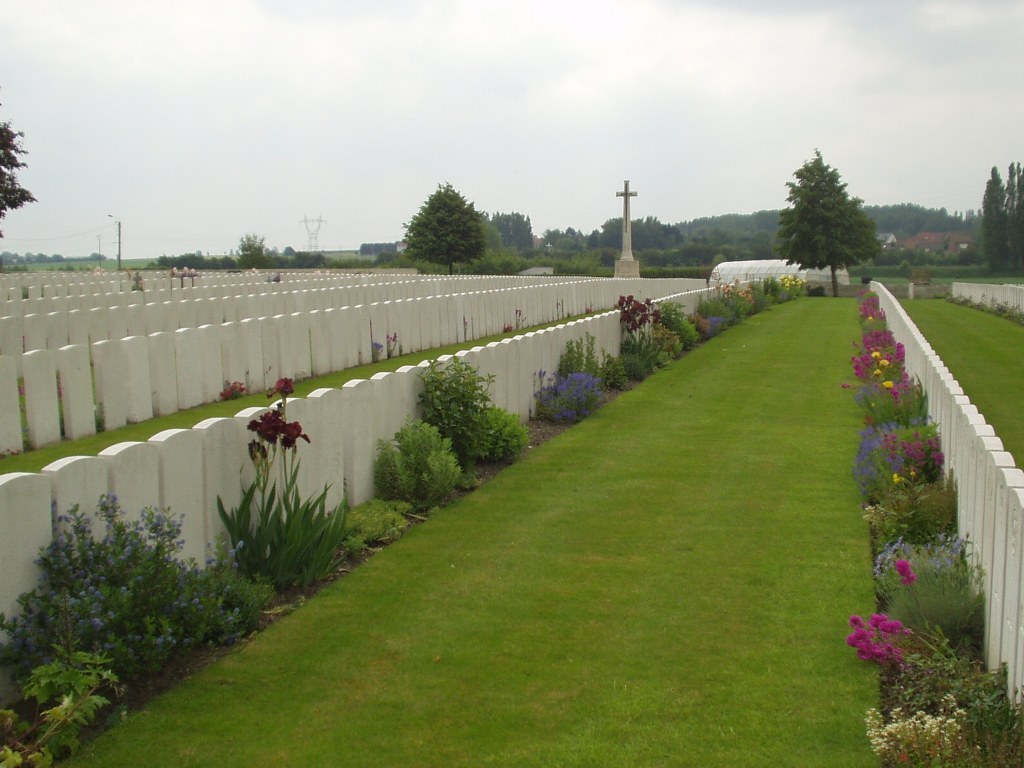 Chocques is 4 kilometres north-west of Bethune on the road to Lillers. When you reach the traffic lights on this road at Chocques, follow the signs for the centre of town and go through the main street, then turn left towards Gonnheim. Take the next turning on the right and the cemetery lies approximately 400 metres down the road on the left.

Chocques was occupied by Commonwealth forces from the late autumn of 1914 to the end of the war. The village was at one time the headquarters of I Corps and from January 1915 to April 1918, No.1 Casualty Clearing Station was posted there. Most of the burials from this period are of casualties who died at the clearing station from wounds received at the Bethune front. From April to September 1918, during the German advance on this front, the burials were carried out by field ambulances, divisions and fighting units. The groups of graves of a single Royal Artillery brigade in Plot II, Row A, and of the 2nd Seaforths in II D, and III A, are significant of the casualties of the 4th Division at that time. The big collective grave in VI A contains the remains of 29 soldiers of the 4th King's Liverpool Regiment killed in a troop train in April 1918. The stone memorial in IA is placed behind the graves of eight men of the 3rd Squadron, RFC, killed in a bomb explosion on the aerodrome at Merville in March 1915. After the Armistice it was found necessary to concentrate into this Cemetery (Plots II, III, IV and VI) a large number of isolated graves plus some small graveyards from the country between Chocques and Bethune. Among the small cemeteries thus removed were:- ANNEZIN Communal Cemetery Extension, a short distance West of Bethune, made by the 3rd Division in April, 1918, which contained 38 graves. LES HARISOIRS British Cemetery, Mont-Bernenchon, 4.8 Kms North East of Chocques, made by the 4th Division in April, 1918, which contained 27 graves. CANAL Cemetery, Les Harisoirs, made by the 4th Division in April, 1918, which contained 17 graves. BOIS-DES-MONTAGNES British Cemetery, Vaudricourt, 3.2 Kms South West of Bethune, made by the 46th Field Ambulance in September, 1915, which contained 8 graves. Chocques Military Cemetery now contains 1,801 Commonwealth burials of the First World War, 134 of then unidentified. There are also 82 German war graves, 47 being unidentified. The cemetery was designed by Sir Edwin Lutyens.