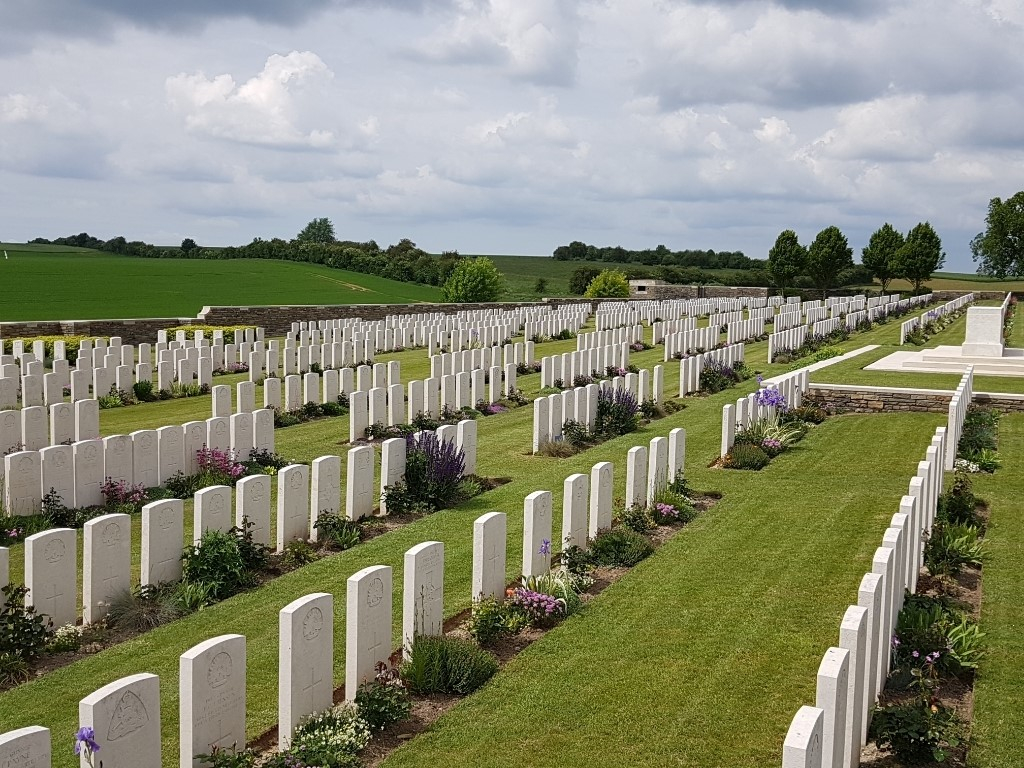 Bellicourt is a village 13 Kms north of St. Quentin and 28 Kms south of Cambrai on the N44 road which connects the two cities. The Cemetery is signposted at the junction of the D331 and N44 and is 100 metres from the main road along the D331 in the direction of Peronne.

On 29 September - 2 October 1918, the Battle of the St. Quentin Canal was fought. The 46th (North Midland) Division stormed the Hindenburg Line at Bellenglise and captured 4,000 prisoners and 70 guns. The 30th United States Division captured Bellicourt and Nauroy, which were cleared by the 5th Australian Division. The North Midland and Australian dead of this engagement fill most of the graves in Bellicourt British Cemetery.

The cemetery was made after the battle, when 73 dead were buried in what is now Plot I. It was greatly enlarged after the Armistice, when graves were brought from the surrounding battlefields and the following smaller cemeteries:-

BELLENGLISE BRITISH CEMETERY, in a field across the canal. It was made by the IX Corps in November, 1918, and almost all the 48 graves in it were those of men of the 46th Division.

CARRIERE BRITISH CEMETERY, BELLICOURT, by a quarry on the East side of the Bellicourt-Bellenglise road. It contained the graves of 27 soldiers from Australia and eight from the United Kingdom who fell in October, 1918.

JONCOURT RAILWAY CEMETERY, on the North side of Joncourt Station, containing the graves of 22 Australian soldiers who fell in October, 1918.

MAGNY-LA-FOSSE BRITISH CEMETERY, at the East end of the village of Magny-la-Fosse, made by Field Ambulances in October, 1918 and containing the graves of 37 soldiers and airmen from the United Kingdom.

MELBOURNE CEMETERY, MONTBREHAIN, on the South side of the Montbrehain-Ramicourt road, containing the graves of 15 Australian soldiers (13 of whom belonged to the 24th Battalion, from Victoria,) who fell on the 5th October, 1918.

MONT-ST. MARTIN BRITISH CEMETERY, GOUY, about half way along the road from Gouy to Estrees, containing the graves of 21 soldiers from the United Kingdom, 15 from Australia and two from South Africa, who fell in October, 1918, and two German soldiers.

NAUROY ROAD CEMETERY, BELLICOURT, on the Eastern outskirts of Bellicourt village, containing the graves of 21 Australian soldiers who fell at the end of September, 1918.

SIEVIER CEMETERY, BEAUREVOIR, in the hamlet of Geneve, containing the graves of 22 soldiers from the United Kingdom, eight from Australia and one from Canada, who fell in October, 1918.

Bellicourt British Cemetery now contains 1,204 burials and commemorations of the First World War. 313 of the burials are unidentified but there are special memorials to 21 casualties known or believed to be buried among them.