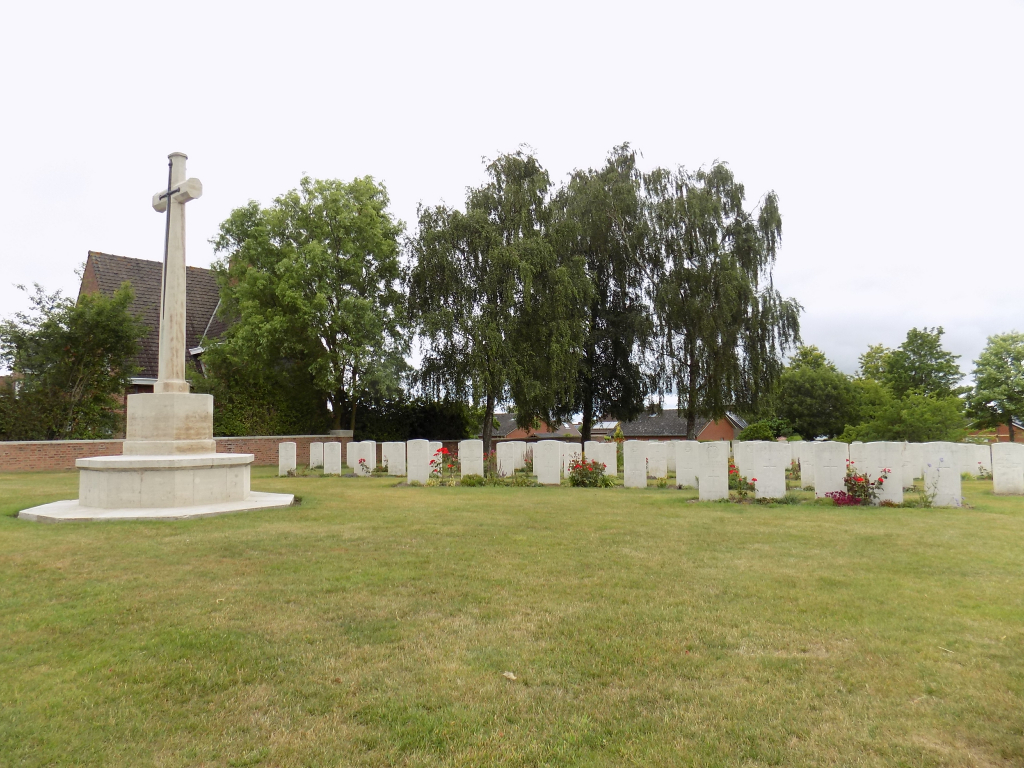 Westoutre British Cemetery is located 11.5 Kms south-west of Ieper town centre on a road leading from the N375 Dikkebusseweg. From Ieper town centre the Dikkebusseweg (N375) is located via Elverdingsestraat, straight over a roundabout onto J.Capronstraat (for 30 metres), then left along M.Fochlaan. Immediately after the train station, the first right hand turning is the Dikkebusseweg. 10 Kms along the Dikkebusseweg lies the right hand turning onto the N315 Sulferbergstraat. 2.5 Kms along the N315 lies the village of Westouter. The cemetery itself is located on the Poperingestraat, 200 metres from the village centre, opposite the fire station.

The village of Westoutre (now Westouter) remained in Allied hands from the early months of the First World War to the Armistice, but in the summer of 1918, after the Battles of the Lys, it was within 2.4 Kms of the front line. Westoutre British Cemetery was begun in October 1917. It was used until the following April and again in August-October 1918, and 50 graves were brought into it from the battlefields of the Ypres salient, from BIXSCHOTE GERMAN CEMETERY and KEMMEL FRENCH CEMETERY after the Armistice. French units used the cemetery in April-August 1918, but these graves were later removed. The cemetery now contains 175 Commonwealth burials and commemorations of the First World War. 52 of the burials are unidentified but there are special memorials to five casualties known or believed to be buried among them. The four Second World War burials all date from May 1940 and the withdrawal of the British Expeditionary Force to Dunkirk ahead of the German advance. There is also one French burial from this period. The cemetery was designed by W H Cowlishaw.