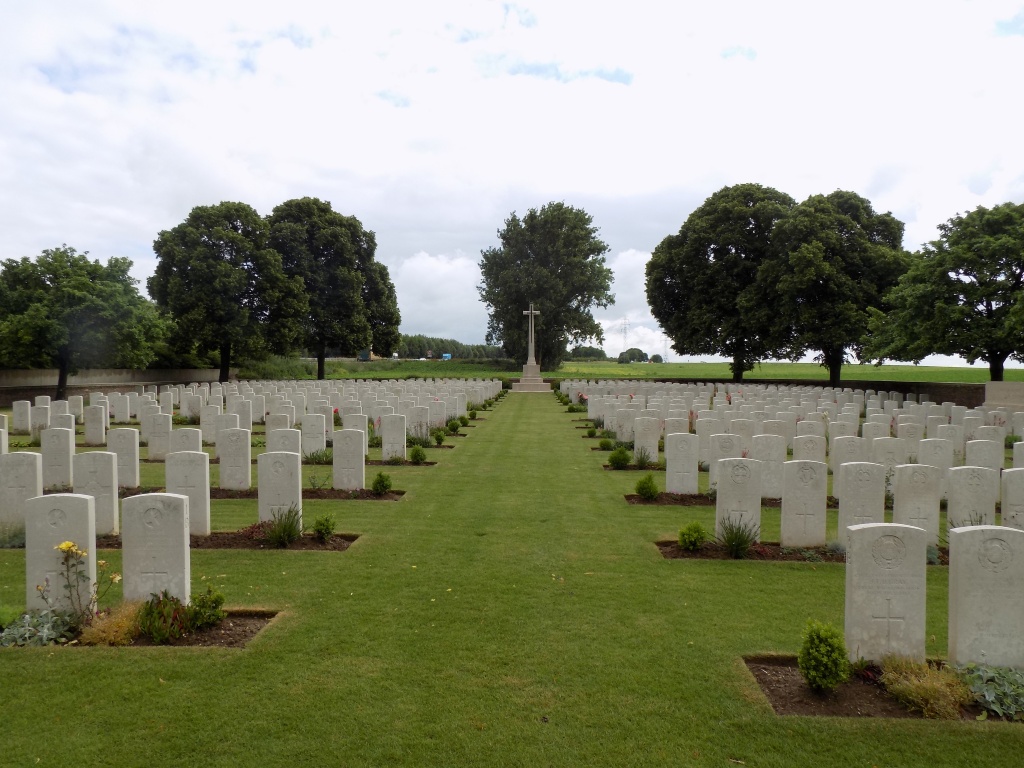 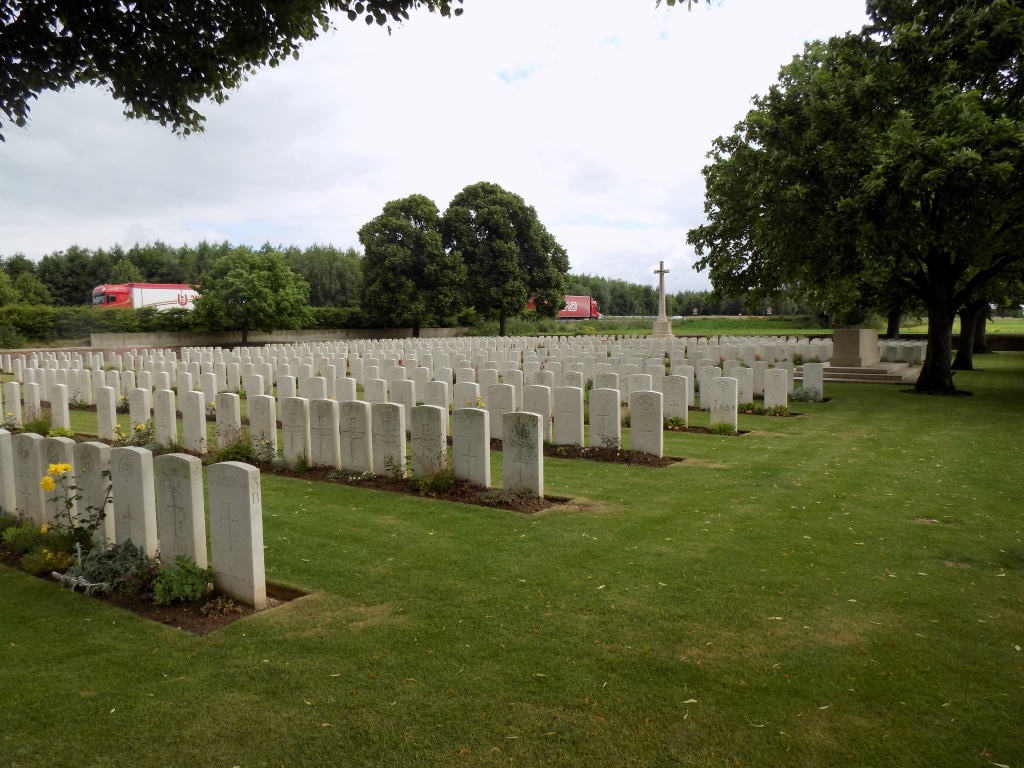 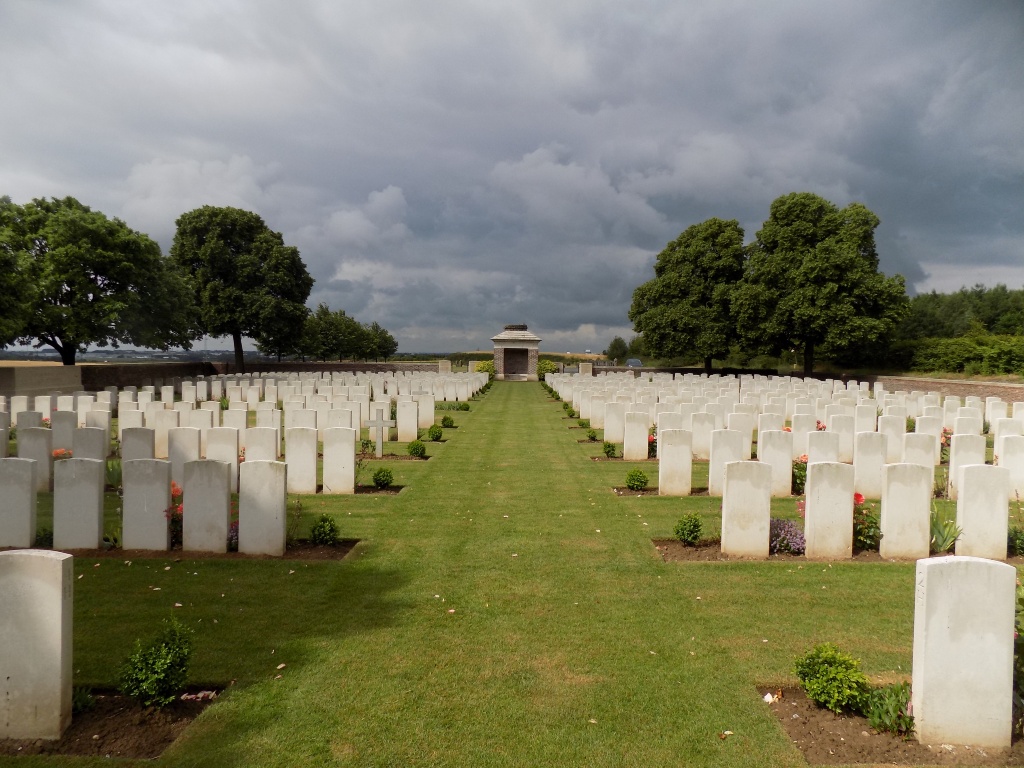 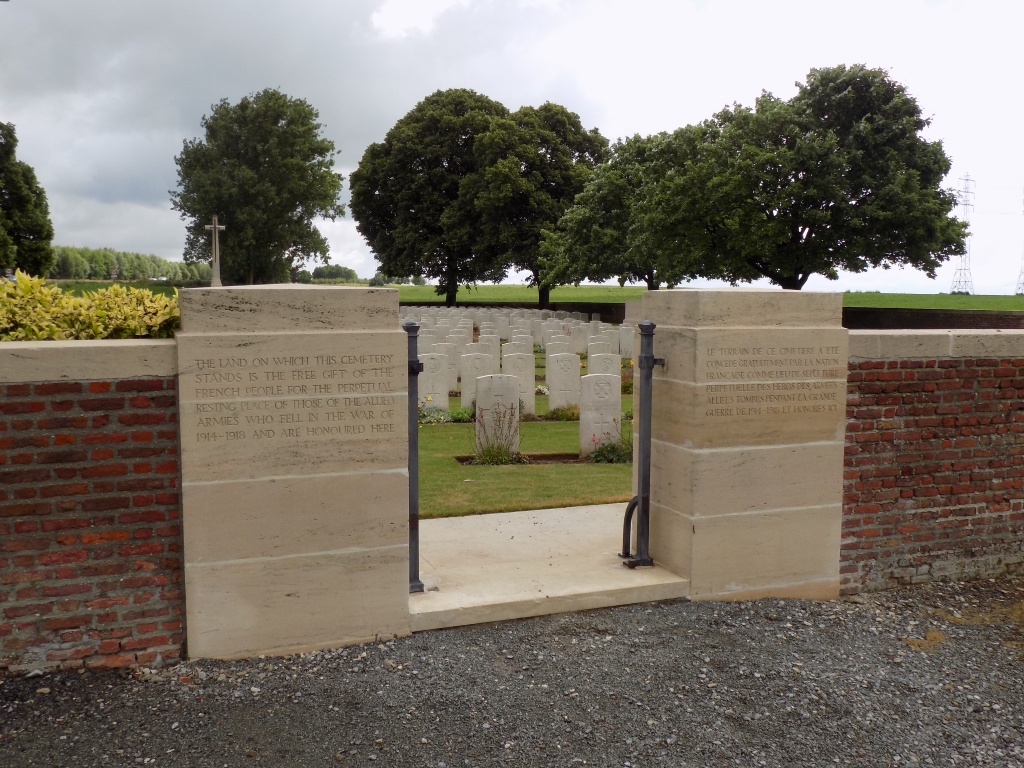 Leave St-Laurent Blagny on the D42 (Athies to Biache St Vaast) and drive into the village of Athies-les-Arras. After 500 metres take a left turn onto the Rue du Chauffour. Continue for 1.2 kilometres down a small track and the cemetery will be seen on the right.

Athies was captured by the 9th (Scottish) Division, which included the South African Brigade, on 9 April 1917. It remained in Allied hands until the end of the war.

Point-Du-Jour was a house on the road from St. Laurent-Blangy to Gavrelle and by 1917 it had become a German redoubt, captured by the 34th Division on 9 April.

Two cemeteries were made on the right of the road from St. Laurent-Blangy to Point-du-Jour, No.1 Cemetery becoming the present Point-Du-Jour Military Cemetery. It was used from April to November 1917, and again in May 1918, and contained at the Armistice 82 graves (now part of Plot I). It was then enlarged when over 650 graves were brought in from the battlefields and small cemeteries north, east and south of Arras, including:-

BROWN'S LINE CEMETERY, ST. LAURENT-BLANGY, about 800 metres North of that village, was named from one of the objectives on the 9th April 1917. It contained the graves of 32 soldiers from South Africa and one from the United Kingdom, who fell on that day.

EFFIE TRENCH CEMETERY, ATHIES, was 500 metres South of the Point-du-Jour. It contained the graves of 22 soldiers of the 1st East Lancs and the Royal Field Artillery, who fell in April and May 1917.

EVIN-MALMAISON COMMUNAL CEMETERY contained the graves of six soldiers from the United Kingdom and one from Canada, buried by the enemy in 1917; one of these graves was not removed.

HENIN-LIETARD COMMUNAL CEMETERY contained the graves of 13 soldiers of the 12th (Eastern) Division, which occupied Henin-Lietard on the 12th October 1918.

LONELY HOUSE CEMETERY, GAVRELLE, between the Point-du-Jour and Gavrelle, contained the graves of 25 sailors, soldiers and Marines from the United Kingdom, who fell in April-July 1917.

POINT-DU-JOUR MILITARY CEMETERY No.2, which was very close to the present cemetery, contained the graves of 15 soldiers from the United Kingdom who fell in April-June 1917.

QUARRY CEMETERY, FAMPOUX, at the West end of Fampoux village, contained the graves of 25 soldiers from the United Kingdom and eight from South Africa, who fell on the 11th and 12th April 1917.

There are now 794 Commonwealth servicemen of the First World War buried or commemorated in this cemetery. 401 of the burials are unidentified but special memorials commemorate 22 casualties known or believed to be buried among them. Other special memorials record the names of six casualties buried in other cemeteries, whose graves were destroyed by shell fire. There are also three Second World War burials and three French war graves.

There are two memorials in the vicinity, one of which commemorates the 9th Division, whilst the other commemorates the service of seven Battalions of the Seaforth Highlanders in the neighbourhood.