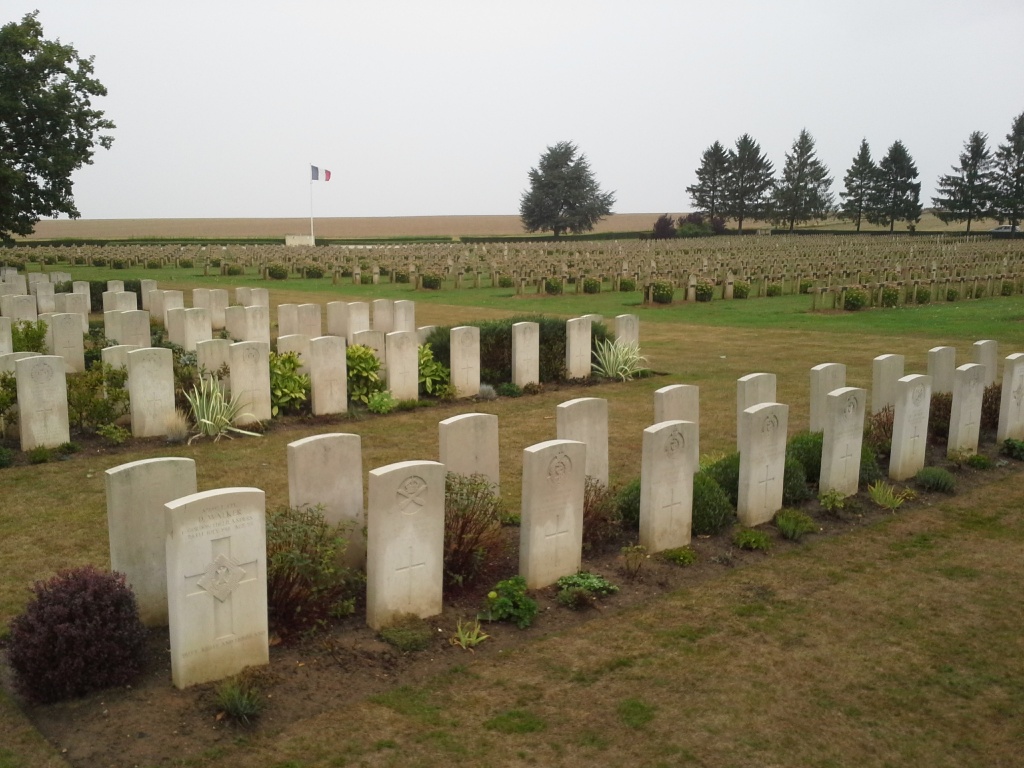 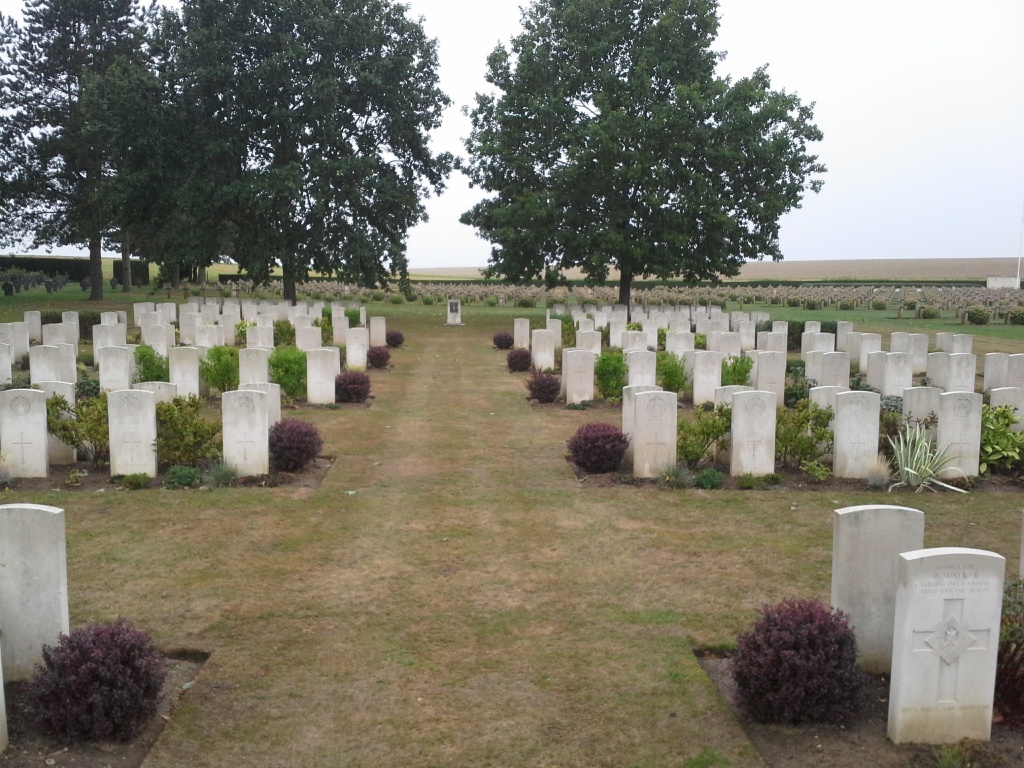 Vauxbuin is a village 4 kilometres to the south-west of Soissons, and Vauxbuin French National Cemetery can be reached from the direction of Soissons via the N2, Soissons to Paris road. It is necessary to go around the Soissons ring road following the signs for Paris. On leaving the Soissons ring road via a large roundabout, continue to follow the signs for Paris via the N2. Vauxbuin French National Cemetery lies 3 kilometres along this road on the right side. Caution must be taken along this road as it is a very busy road with traffic travelling very fast. The Commission Plot forms a small part of this large French Cemetery which is situated adjacent to a German military cemetery.

The French National Cemetery was made by the French Graves Service in 1920-1924. The British plot, made after the Armistice, contains the graves of soldiers from the United Kingdom who fell in 1914 and 1918 who belonged to the 4th, 5th, 15th (Scottish) and 34th Divisions.

The following were among the burial grounds from which graves were transferred to this cemetery:-

AMBLENY FRENCH NATIONAL CEMETERY, a cemetery of 10,266 burials, on the North side of the Compiegne-Soissons main road. Here were buried two British soldiers who fell on the 1st April 1918.

DOMMIERS BRITISH CEMETERY, on the East side of that village, which contained the graves of 50 soldiers of the 15th Division who fell in July and August 1918.

LE PRESSOIR FRENCH MILITARY CEMETERY, AMBLENY, in which were buried 370 French soldiers, 33 German, and three British who died in French hospitals in April 1918.

LONGPONT FRENCH MILITARY CEMETERY, AISNE, (in a garden near La Grille Farm), where one British soldier was buried in July 1918 (the 628 French graves also were moved to Vauxbuin).

PARGNY-FILAIN COMMUNAL CEMETERY, used by the Germans in 1914-15, contained one British soldier, who was buried there in September 1914.

SOISSONS COMMUNAL CEMETERY EXTENSION, made by the French, on the West side of the Communal Cemetery. The graves of 88 British soldiers (who fell for the most part in 1914) were reburied here from the battlefields, but both French and British graves have been removed.

TERNY-SORNY FRENCH MILITARY CEMETERY (at the North-East end of the village), which contained the graves of 365 French soldiers and those of two R.G.A. Gunners who died in May 1917.

VAUXBUIN COMMUNAL CEMETERY, where two men of the 58th (London) Division were buried in April 1918.

VAUXBUIN (1870) FRENCH MILITARY CEMETERY ("Cimetiere des Fusilles") near the Church, where two British soldiers were buried, among French and German, in April 1918.

VEZAPONIN COMMUNAL CEMETERY FRENCH EXTENSION, which contained 80 French graves and those of five British soldiers who died in March 1918.

VILLERS-HELON FRENCH MILITARY CEMETERY, which contained 120 French graves and those of three British soldiers who fell in July 1918.

There are now nearly 300, 1914-18 war casualties commemorated in this site. Of these, almost half are unidentified and special memorials are erected to three soldiers believed to be buried among them.

The British plot covers an area of 1,240 square metres.