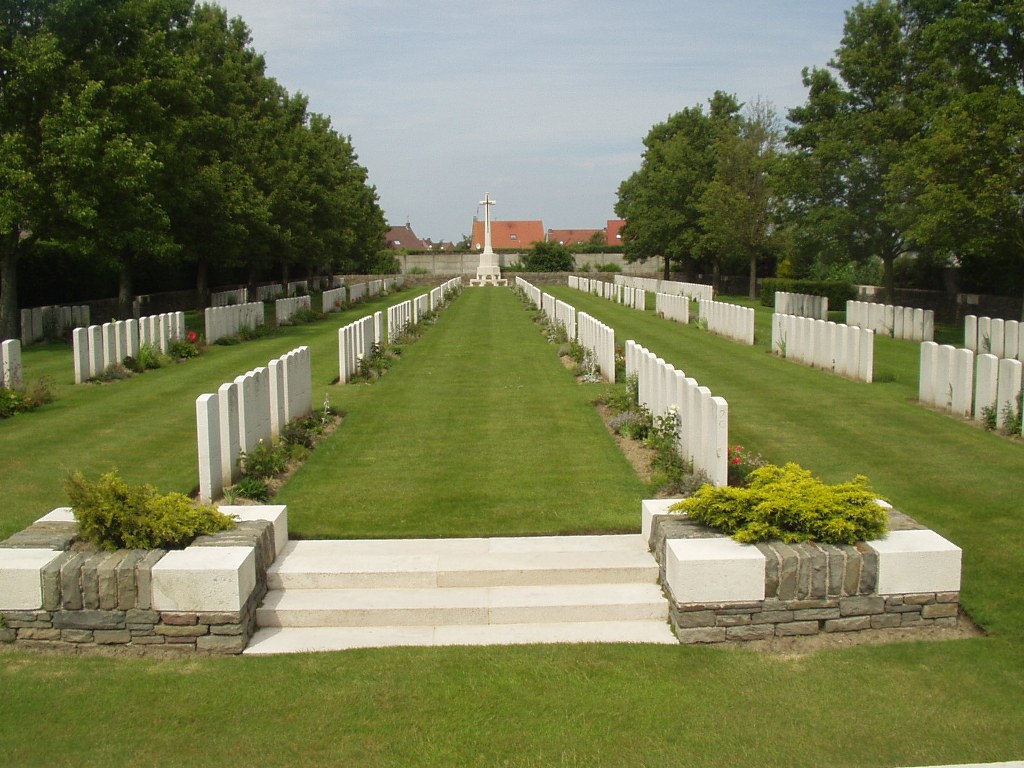 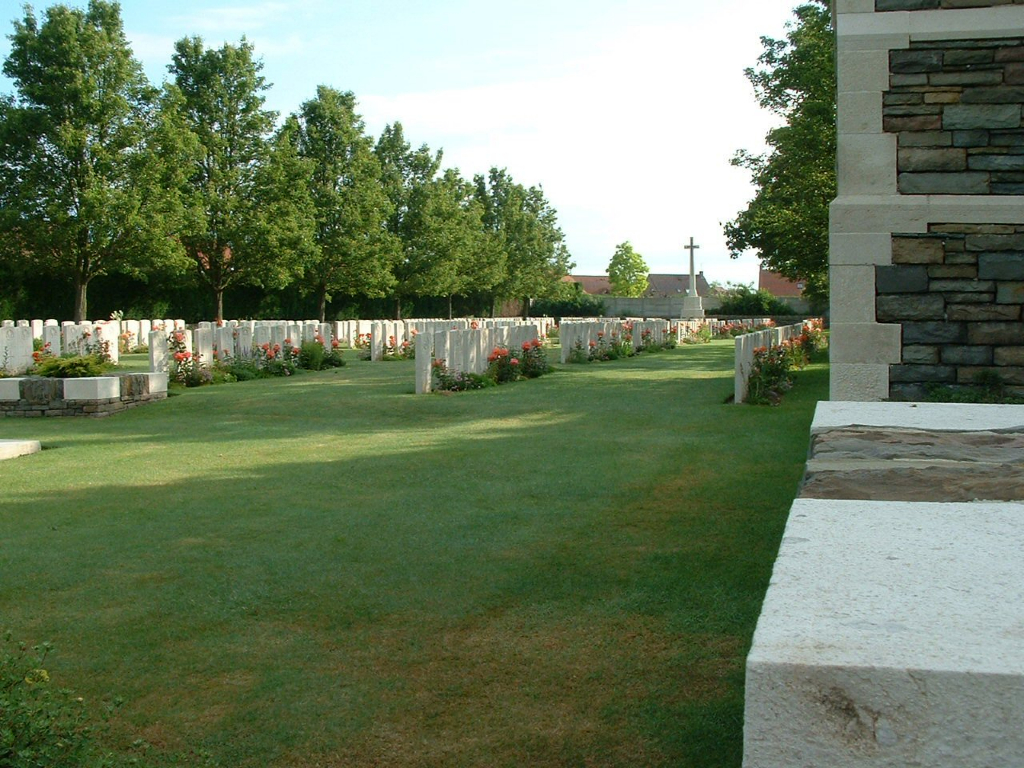 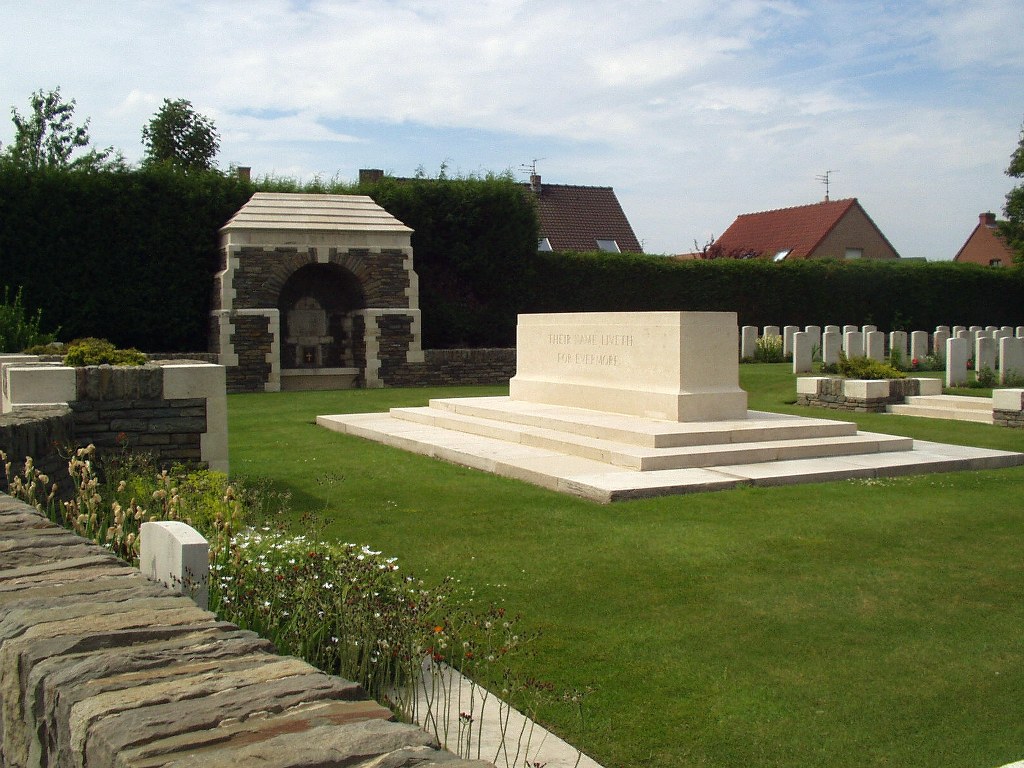 The village of Houplines was briefly occupied by the German forces as they advanced northward toward the channel ports in early October 1914. It was retaken by the British 4th Division later that month and remained in Allied hands until April 1918 when it was overrun by German units during the great spring offensive. It was finally recaptured by the Allied forces in September 1918. Houplines then contained four Commonwealth cemeteries in addition to plots in the communal cemetery. These sites were regrouped and concentrated after the war and today just two cemeteries remain. Houplines Communal Cemetery Extension was established, as ‘Houplines New Military Cemetery’, in October 1914 and used, mostly by the men of the 4th and 6th Divisions, until January 1916. In the years after the Armistice, the cemetery was enlarged when graves were concentrated here from the battlefields around Armentieres and the following cemeteries:-

FERME PHILIPPEAUX BRITISH CEMETERY, HOUPLINES, at Le Ruage, near the South-East side of the road to Frelinghien, between the Chateau and the farm. It contained the graves of 75 soldiers from the United Kingdom (who fell mainly in October 1914, and June-July 1915) and one German soldier; almost all belonged to the 2nd Seaforths or the 1st Royal Irish Fusiliers. The 2nd Seaforths captured the farm in October 1914.

HOUPLINES COMMUNAL CEMETERY, where 71 United Kingdom soldiers were buried, in two plots, in October 1914 - October 1915. Plot I, the larger, was made chiefly by the 1st East Yorks and the 1st West Yorks in the spring of 1915.

HOUPLINES OLD MILITARY CEMETERY, on the North-Eastern edge of the village, in which 235 United Kingdom soldiers and one French civilian were buried in December 1914 - December 1915, and September and October 1918.

RUE-MARLE CEMETERY, LA CHAPELLE-D'ARMENTIERES (next to a new Church just outside Armentieres on the Bois-Grenier road), where 27 United Kingdom soldiers (mainly of the 5th Cameronians) and two Canadian were buried in 1915.

The extension now contains over 530 Commonwealth burials and commemorations of the First World War. 68 burials are unidentified but there are special memorials to four casualties known or believed to be buried among them. The cemetery also contains one Second World War burial.

The 10th (Infantry) Brigade and the First Battle of Ypres

When Britain began mobilizing for war in August 1914, the 10th Infantry Brigade formed part of the 4th Division, one of six infantry divisions that made up the British Expeditionary Force (BEF). The Brigade was composed of four battalions of regular infantry drawn from England, Ireland and Scotland – the 2nd Seaforth Highlanders, the 1st Royal Irish Fusiliers, the 2nd Royal Dublin Fusiliers and the 1st Warwickshire Regiment. The officers and men of the Brigade mustered at Shorncliffe in Kent before crossing to France on 23 August, the same day that their comrades in the BEF clashed with the German forces at the Battle of Mons. They first saw action just three days later at the Battle of Le Cateau and went on to serve with distinction throughout the Allied retreat and at the battles of the Marne and Aisne in September. By the beginning of October the Brigade was stationed in trenches south of Soissons, but the BEF soon began moving north to Flanders where the German forces were trying to reach the channel ports that were still in Allied hands. From mid-October to mid-November 1914 what began as the ‘race to the sea’ descended into a desperate series of attacks and counter-attacks which would become known as the First Battle of Ypres.

In the last two weeks of October, units of the 10th Brigade took part in several actions against the German forces on the southern sector of the British front in the vicinity of Armentieres and Houplines. On the morning of 17 October, the 1st Royal Irish Fusiliers formed the advance guard of the Brigade as it crossed the river Lys at Erquinghem and advanced towards Armentières, which was then occupied by a small number of German units. Street fighting began soon after the Brigade entered the town and made progress slow, but by noon most of the streets had been cleared of German troops and civilians were beginning to emerge from the houses. Armentières was now in British hands, but heavy fighting continued northeast of the town where C Company of the Royal Irish launched an attack on the Farm Phillipeaux at Le Ruage. The farmhouse was held by a well-armed detachment of Saxon troops who refused to surrender and the Brigade suffered numerous casualties as it tried to dislodge the occupants. By nightfall the farmhouse had been set on fire, one of its walls had been blown in by British sappers, and most of the defenders were either dead or mortally wounded. The ruined farmhouse became known as ‘Sydney Street’ after the so-called Sydney Street Siege, which took place in East London in 1911 when a group of Latvian criminals was besieged by a detachment of Scots Guards directed by Winston Churchill. Like the Saxon soldiers, several of the Latvians were killed after the building they were hiding in was set on fire.

By successfully holding the Allied line in this area, the Brigade allowed more troops to be deployed further north around Ypres where the German forces concentrated most of their attacks until well into November. The 1st Battalion Royal Irish Fusiliers and the 2nd Seaforth Highlanders suffered the highest number of casualties, with over 70 men killed at Le Rouage on 17 October and Frelinghien on 19 and 20 October. The dead were initially buried at Ferme Phillipeaux before being re-interred at Houplines Cemetery Extension after the war.