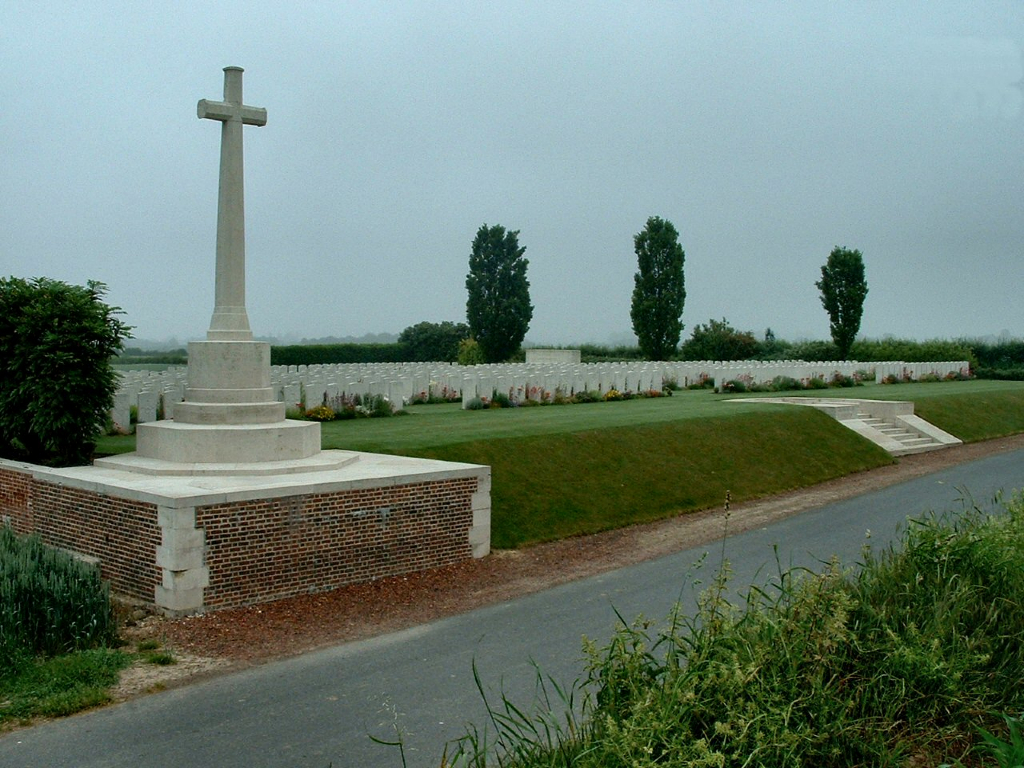 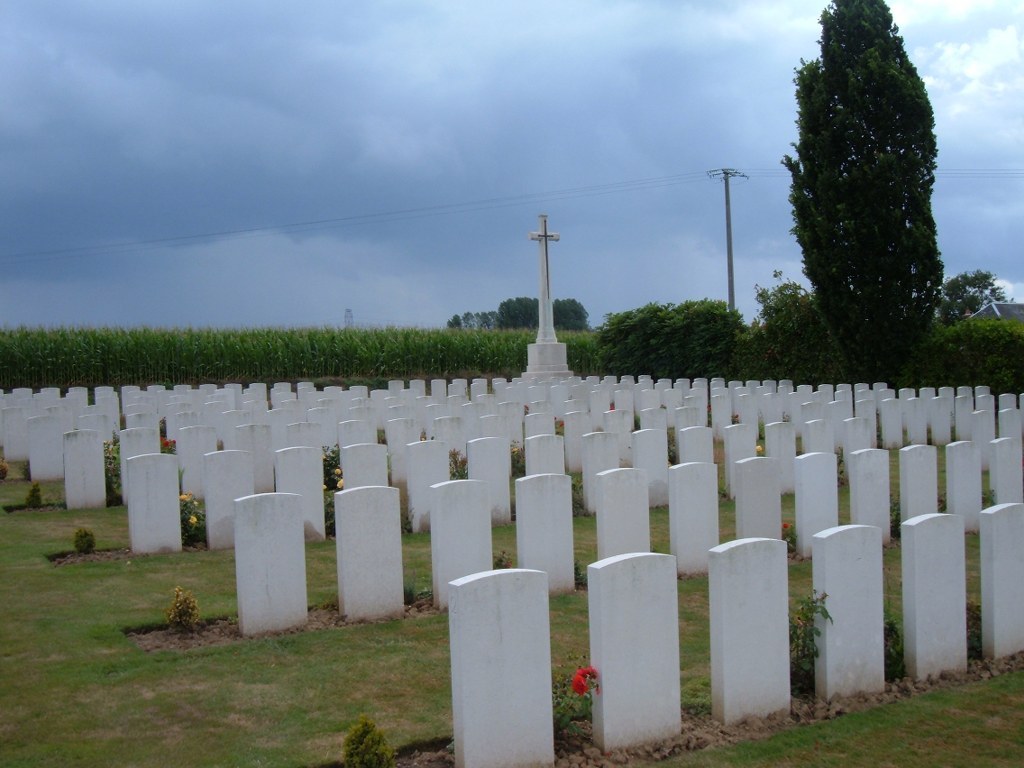 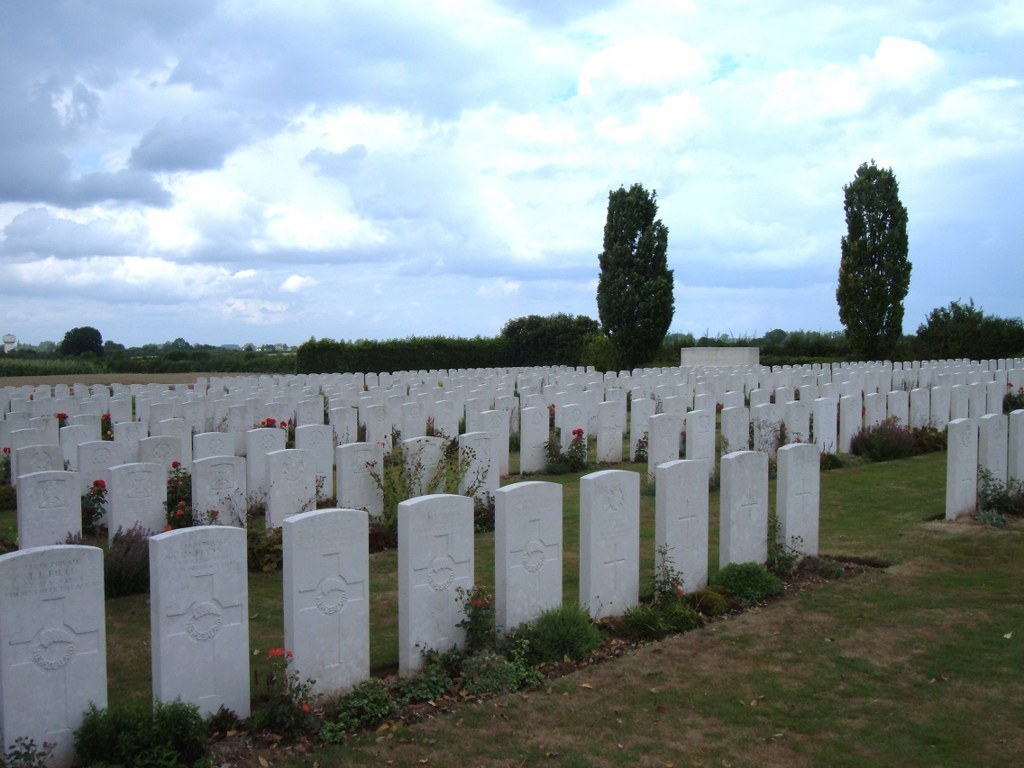 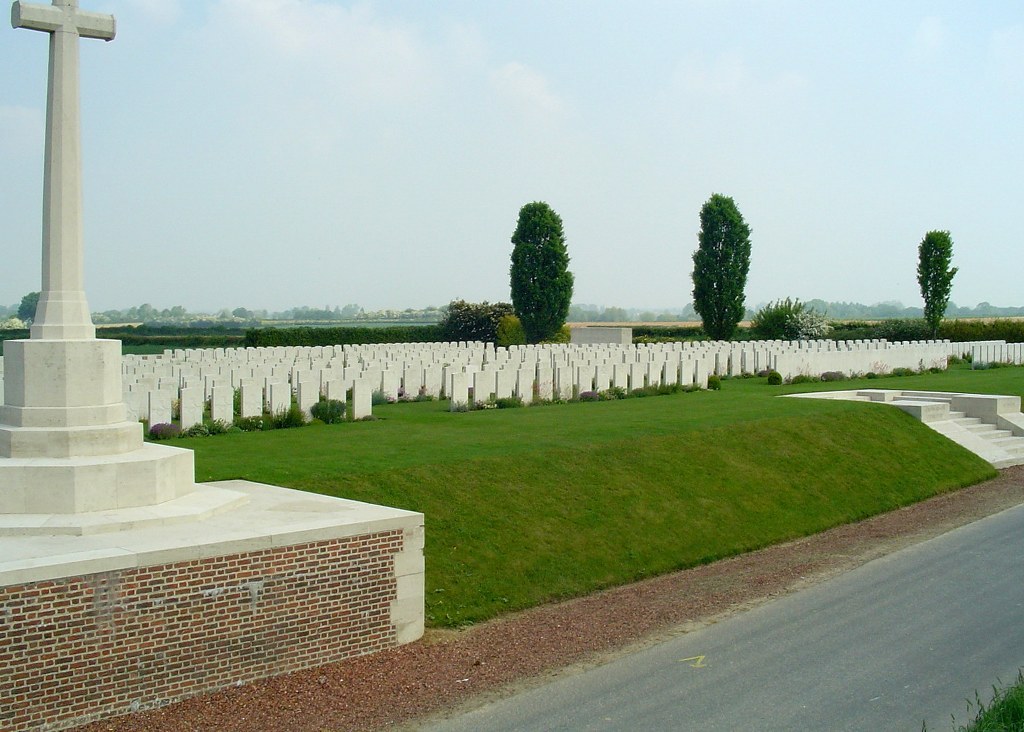 Fontaine-au-Bois is a village some 8 kilometres north-east of Le Cateau, or 4 kilometres north-west of Landrecies. Cross Roads Cemetery is west of the village beyond the hamlet of Rue du Pont, at the crossroads with the road to Bousies.

Cross Roads Cemetery was begun in the first week of November, 1918, by the 1/1st Northumbrian Field Ambulance; and at the Armistice it contained the graves of 61 soldiers from the United Kingdom (now Row A and part of Row B, Plot I). It was then enlarged by the concentration of graves from the battlefields between the Escaut and the Sambre, and from certain other cemeteries, including:- BAVAY GERMAN CEMETERY, on the South side of the road to Feignies, in which eleven soldiers from the United Kingdom and two from New Zealand were buried in the latter half of 1918. The German graves were removed to Frasnoy German Cemetery. CATILLON COMMUNAL CEMETERY EXTENSION, in which 35 soldiers of the 1st and 8th Divisions were buried after the capture of Catillon by the 1st Division on the 4th November, 1918. ETH BRITISH CEMETERY, on the road to Wargnies-le-Grand, contained the graves of 16 men of the 19th Division who fell on the 4th and 5th November, 1918. VILLEREAU CHURCHYARD, in which two soldiers from New Zealand and one from the United Kingdom were buried in November, 1918. With four exceptions, every man buried in this cemetery fell between the 1st October, 1918 and the Armistice. There are now nearly 750, 1914-18 war casualties commemorated in this site. Of these, over 100 are unidentified and special memorials are erected to one soldier from the United Kingdom and one from New Zealand, believed to be buried among them. Other special memorials record the names of nineteen soldiers from the United Kingdom, one from New Zealand and one from South Africa, buried in BAVAY German Cemetery and LANDRECIES Communal Cemetery, whose graves could not be found. The cemetery covers an area of 2,512 square metres and is enclosed by a red brick wall on three sides.