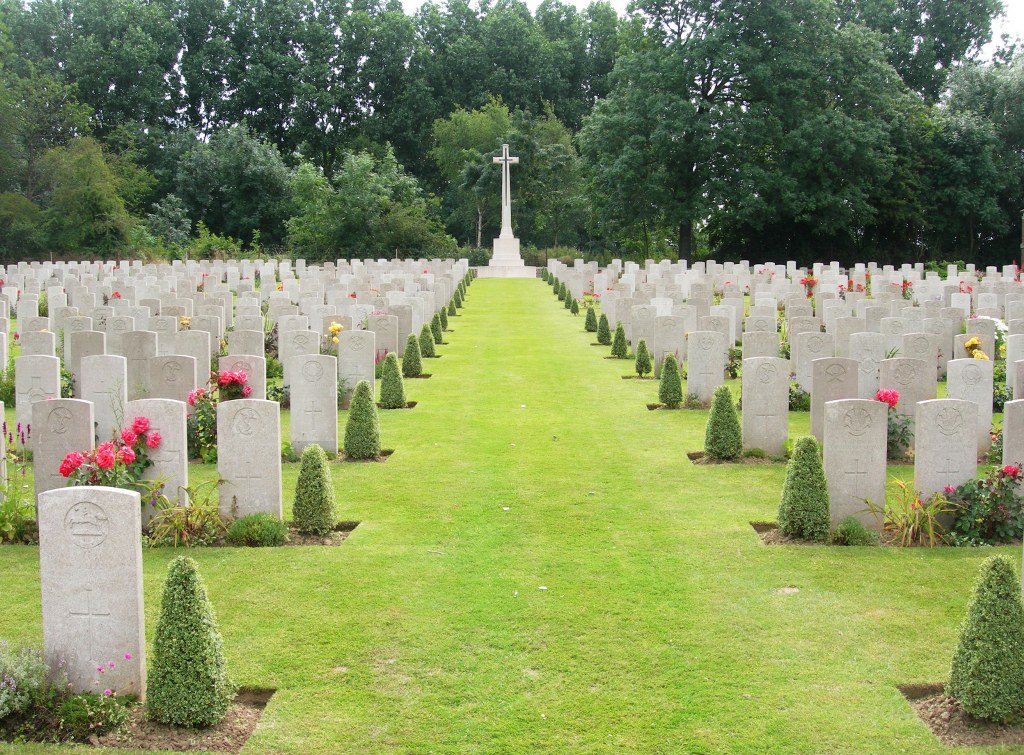 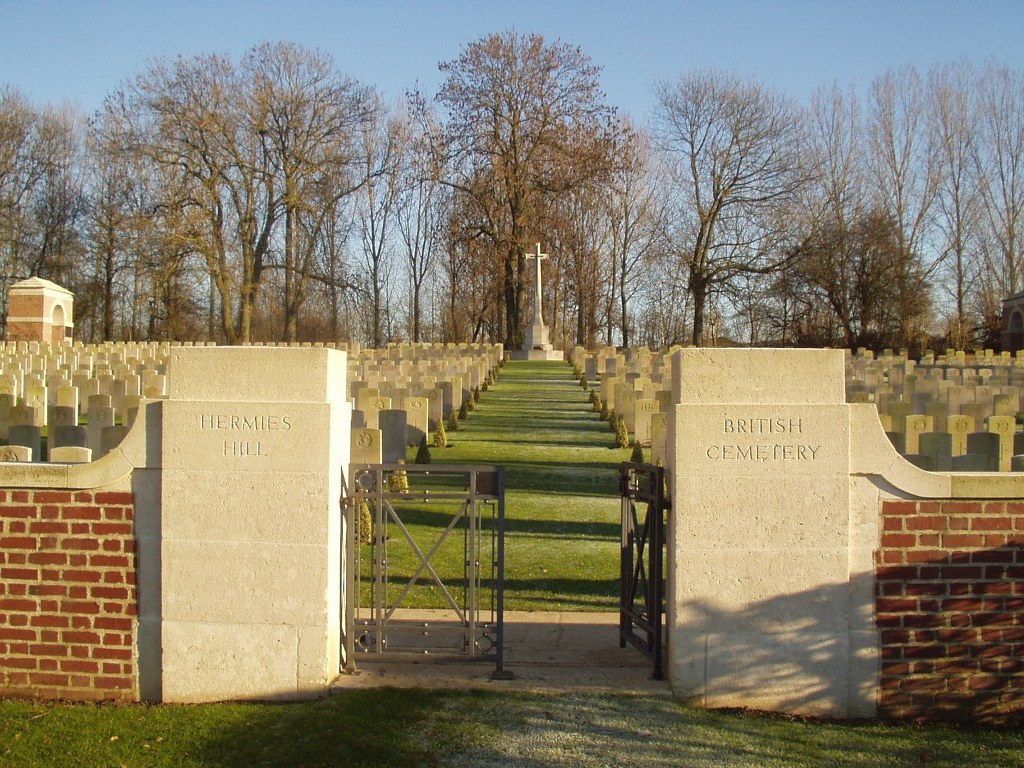 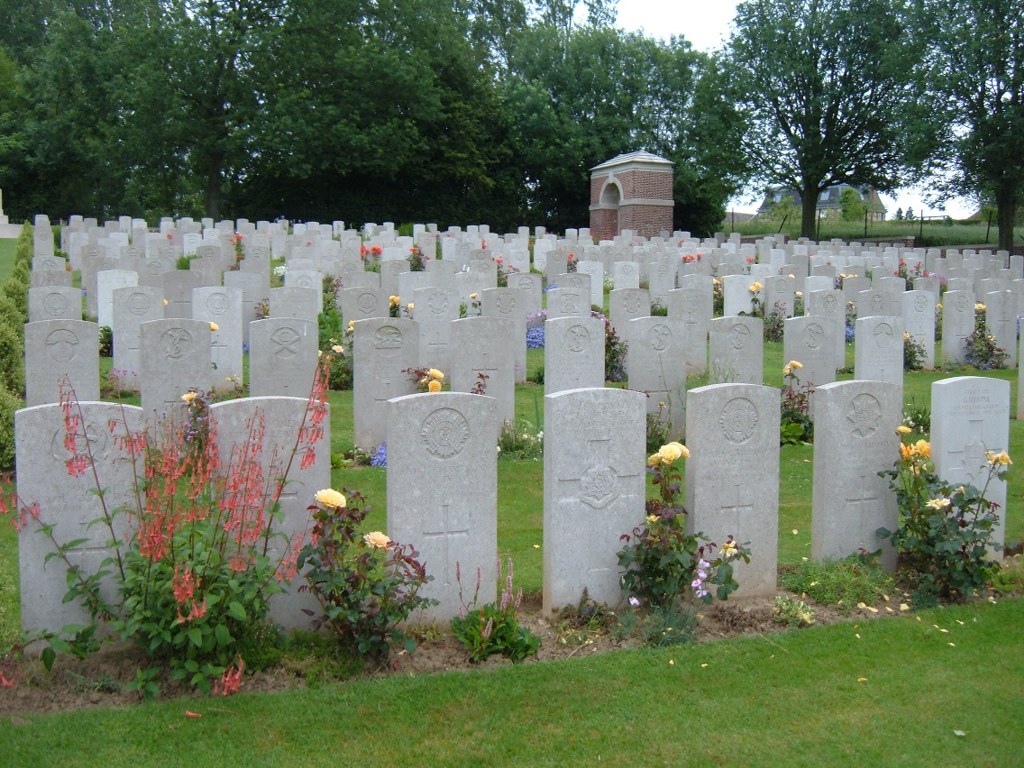 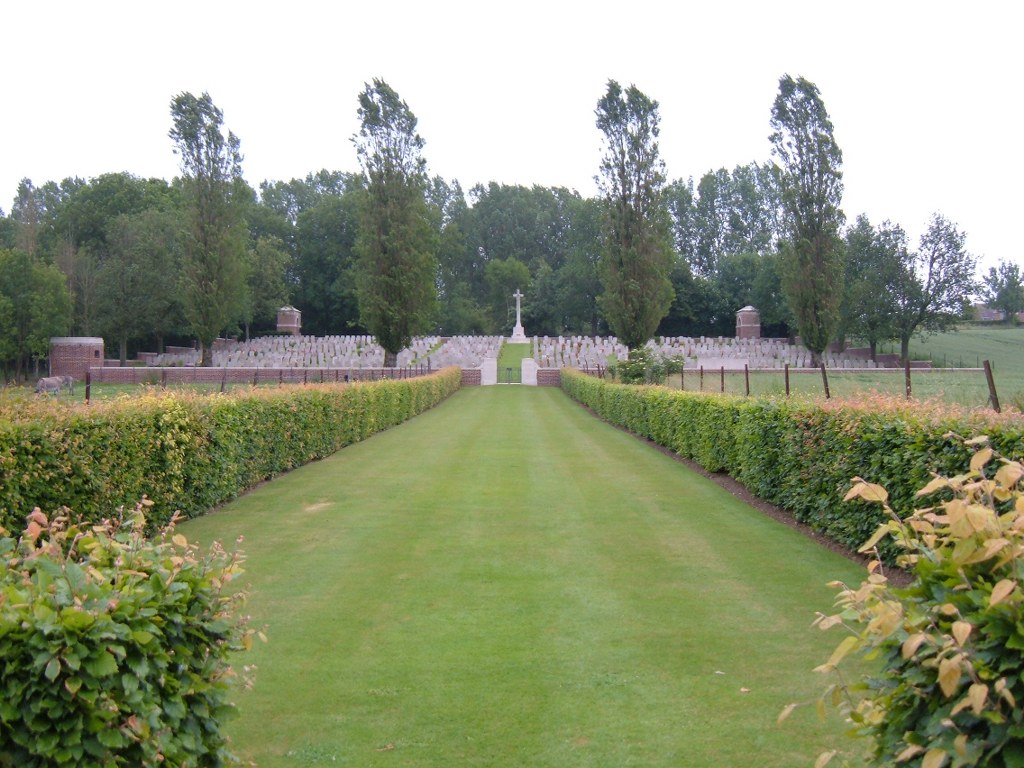 Hermies is a town in the Department of the Pas-de-Calais, approximately 3.5 kilometres south of the road (D930) from Bapaume to Cambrai. From the D930 take the D34 for 3.2 kilometres to its junction with the D5E where the first CWGC sign is situated. The Cemetery lies on the left side of the road, 150 metres from the junction.

Hermies was seized on the morning of the 9th April 1917, by a surprise attack of the 2nd and 3rd Australian Infantry Battalions. It was held against the advancing Germans on the 22nd March 1918, by the 17th Division, but evacuated on the following day; and it was retaken in September 1918. It was later "adopted", with Havrincourt, by the County Borough of Huddersfield. The cemetery was begun in November 1917, and carried on by fighting units until March 1918, and further graves were added in the following September. These original burials comprise nearly the whole of Plot I; the remaining three Plots were added after the Armistice by the concentration of graves from a wide area round Hermies and from certain small cemeteries, including:- DEMICOURT GERMAN CEMETERY, BOURSIES, at the North end of the hamlet of Demicourt, which contained about 100 German graves and those of 15 unidentified men of the 7th Argyll and Sutherland Highlanders. HAVRINCOURT COTTAGE GARDEN CEMETERY, made by the 47th (London) Division in the Southern part of the village, which contained the graves of 30 soldiers from the United Kingdom and 5 Germans who fell in the winter of 1917-1918. HAVRINCOURT WOOD BRITISH CEMETERY, about 1 kilometre South-West of Havrincourt village. It contained the graves of 70 soldiers from the United Kingdom who fell on the 20th November, 1917, the first day of the Battle of Cambrai, and all but 5 of whom belonged to the Infantry of the 62nd (West Riding) Division. HERMIES AUSTRALIAN CEMETERY, on the North-West side of the village, which contained the graves of 1 officer and 20 N.C.O.s and men of the 2nd Australian Infantry Battalion, who fell on the 9th April 1917. There are now over 1,000, 1914-18 war casualties commemorated in this site. Of these, nearly 300 are unidentified and special memorials are erected to 28 soldiers from the United Kingdom and 3 from Australia, known or believed to be buried among them. Other special memorials record the names of 6 soldiers from the United Kingdom, buried in two German Cemeteries, whose graves were destroyed by shell fire. The cemetery covers an area of 3,629 square metres and is enclosed by a brick wall.