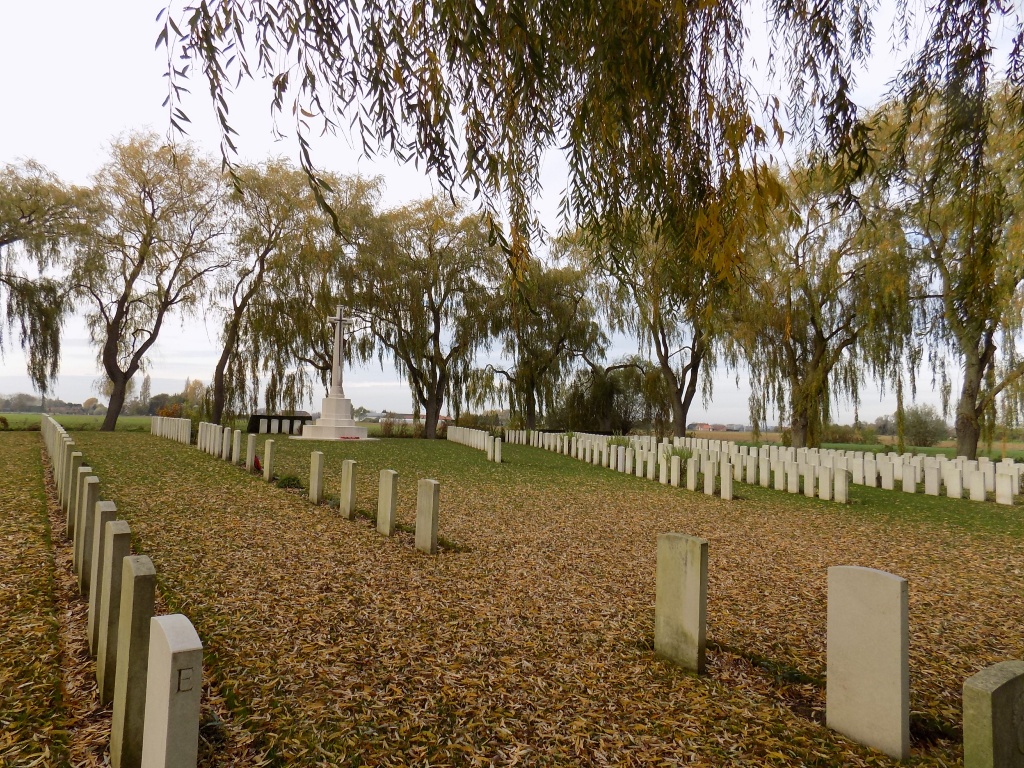 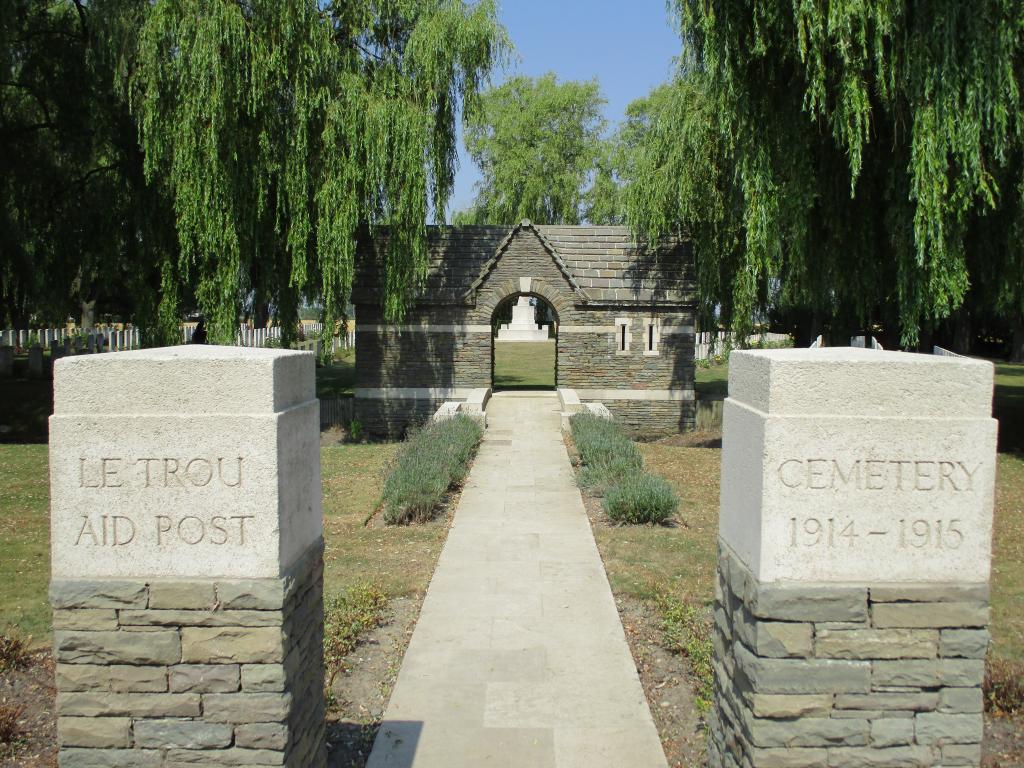 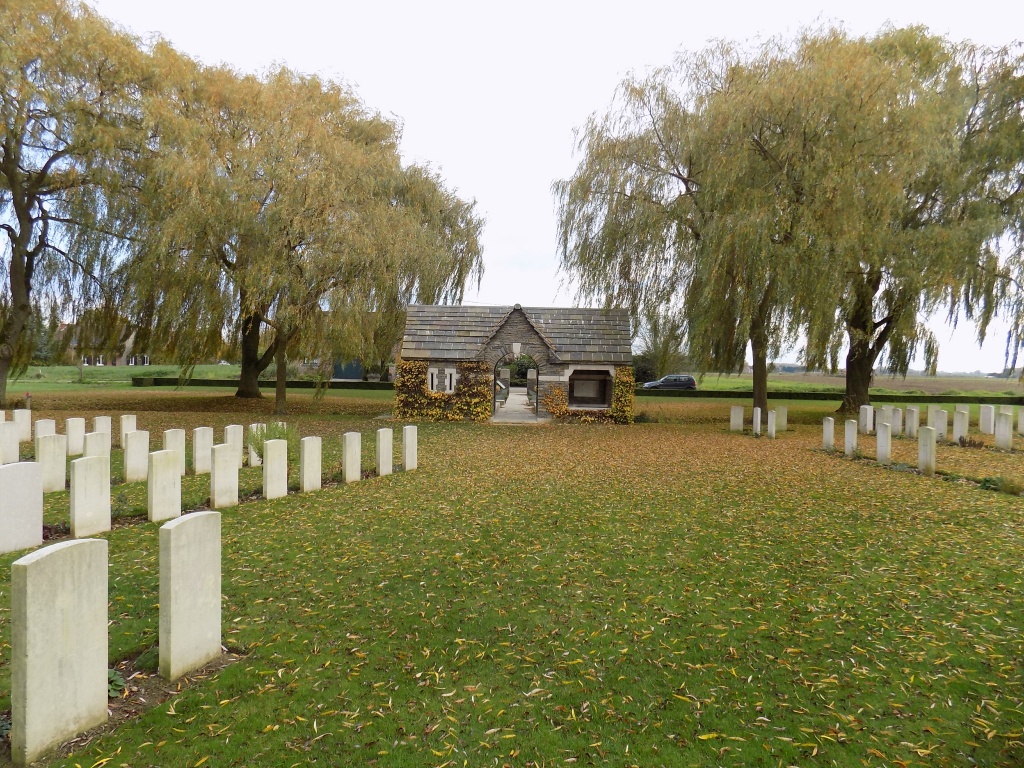 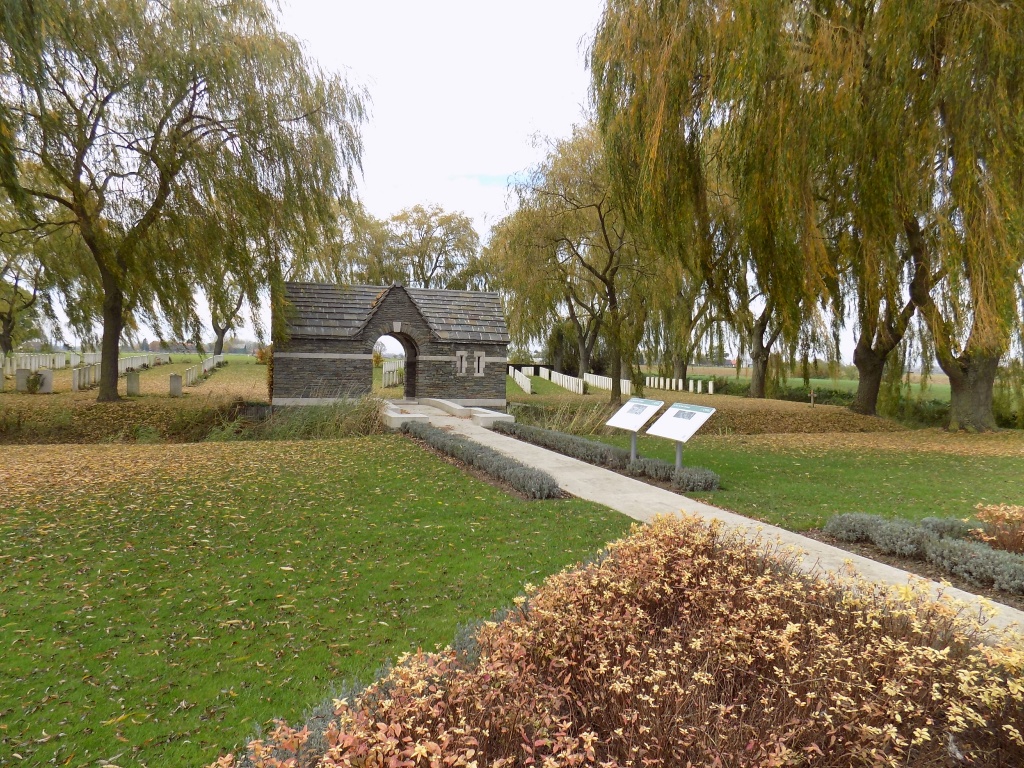 Fleurbaix is a village in the Department of the Pas-de-Calais, five kilometres south-west of Armentieres and fourteen kilometres west of Lille. Le Trou is a hamlet of Fleurbaix, south of the village, on the side road, off the D175, known as the Rue-Petillon.

In October 1914 British soldiers serving in the Fleurbaix sector began burying their fallen comrades beside a regimental aid post and dressing station located not far from the support trenches that led to the front-line. Le Trou Aid Post cemetery was used until July 1915 and when the war ended it contained just 123 burials. In the years after the Armistice, the cemetery was enlarged when the remains of Commonwealth soldiers were brought here from other burial grounds and battlefields throughout the region, including:-

LA HAUTE LOGE BRITISH CEMETERY, LE MAISNIL (-ENWEPPES), about 400 metres East of the cross roads at Le Maisnil. It contained the graves of 80 officers and men of the 2nd Argyll and Sutherland Highlanders and the 1st Middlesex, who fell on the 21st October 1914. These units, after holding out against superior forces, were forced to retire on the evening of the 21st and their dead were buried by the enemy on the 22nd.

The unique architectural features and landscaping in the cemetery were designed by Sir Herbert Baker, the celebrated British architect who also designed the Indian Memorial at Neuve Chapelle. Today more than 350 Commonwealth soldiers of the First World War are buried at Le Trou Aid Post. Over 200 burials are unidentified but special memorials commemorate five casualties known or believed to be buried among them. There are also two French war graves.

The Battles of Fromelles

On the night of 20 October 1914, as the First Battle of Ypres raged further north in Flanders, the men of the 19th Infantry Brigade of III Corps, were ordered to occupy the villages of Fromelles and Le Maisnil. The Brigade was forced to retire the next day in the face of fierce artillery fire and determined infantry attacks and the 2nd Argyll and Sutherland Highlanders and 1st Middlesex suffered heavy casualties. The British dead were buried in what had now become German territory. By the end of 1914, the villages of Neuve Chapelle, Aubers and Fromelles were behind German lines.

Following the British capture of Neuve Chapelle in March 1915, the Germans greatly reinforced their defensive lines in the sector, particularly around a portion of the front near Fromelles that became known as the Sugarloaf Salient. As part of the Allied spring offensive of 1915, a combination of British and Indian units staged a major assault on the German positions on Aubers Ridge on 9 May. The artillery bombardments that opened the attack made little impression on the fortified German positions and German machine-gunners were able to remain at their posts with the result that many of the attacking troops were cut down as soon as they left their trenches. Despite some initial successes, the British Expeditionary Force failed to achieve its objectives and over 10,000 officers and men were killed, wounded or taken prisoner.

Over a year later, in July 1916, an attack was launched on the German lines around Fromelles. The attack was designed to prevent the Germans from sending units from this sector to their divisions on the Somme front, which was now the scene of a major Allied offensive. On the evening of 19 July, the men of the British 61st (2nd South Midland) Division and the 5th (Australian) Division, most of whom had no experience of combat on the Western Front, advanced towards a well prepared and well organised enemy. Withering machine gun fire forced the units of the 61st Division to retreat before they reached the German lines. To begin with, the Australians fared better and managed to overrun the German forward trenches. They were unable to hold their newly occupied positions, however, and the attack was called off the next day. The Battle of Fromelles made little impact on the German troop movements and the combined British and Australian force suffered over 7,000 casualties.