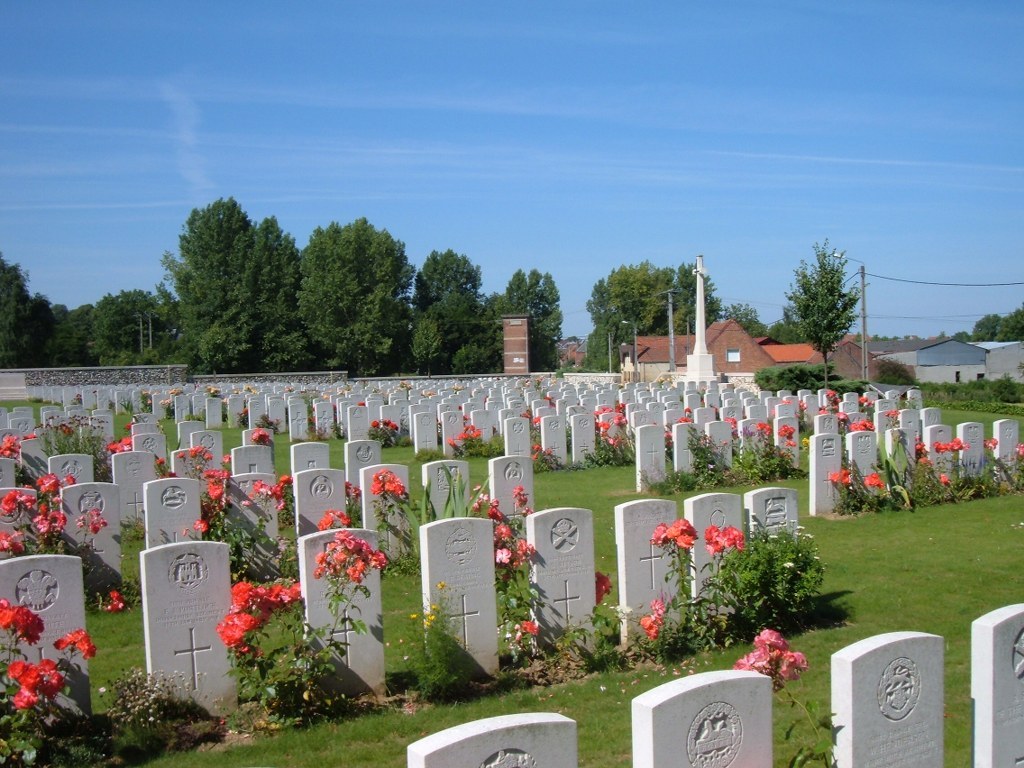 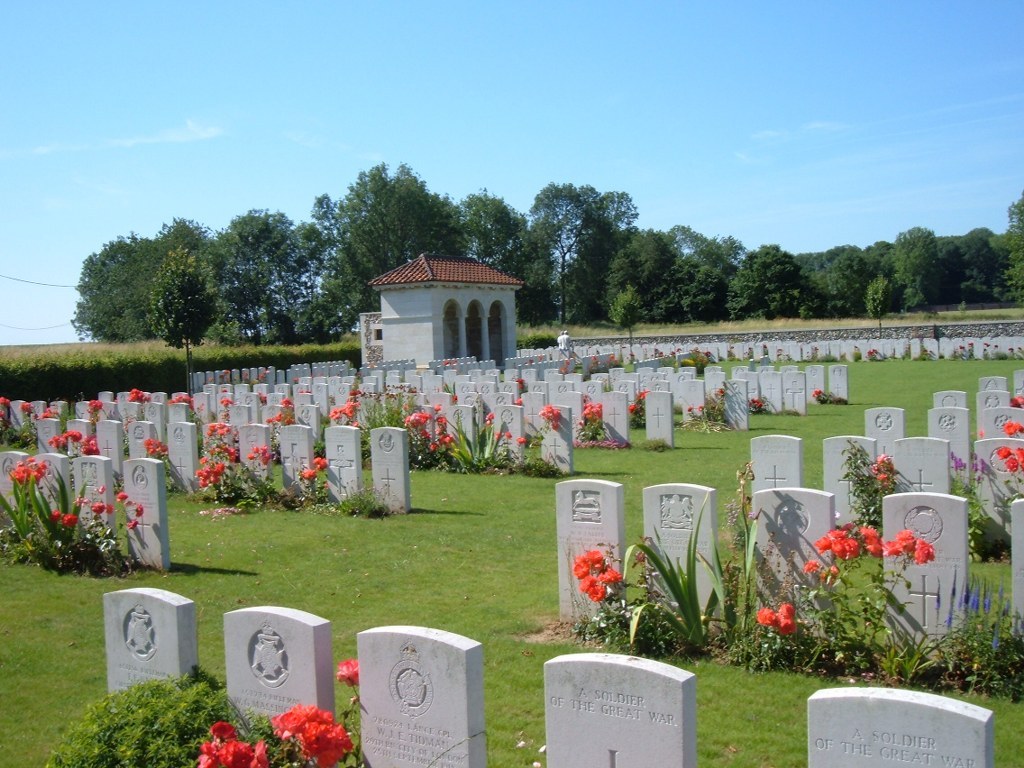 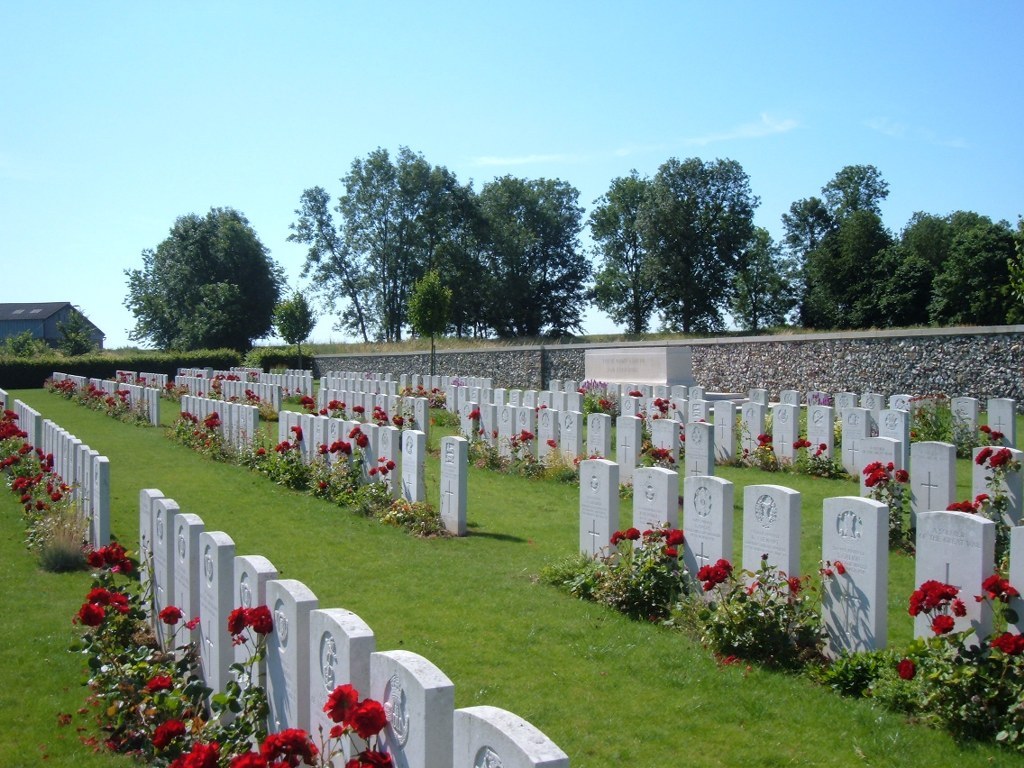 Flesquieres is a village at the junction of the D92 and D89 roads, about 5 kilometres south-west of the main road from Cambrai to Bapaume. The Cemetery lies a little east of the village on the south (right) side of the D92 road to Cantaing.

Flesquieres village was attacked by the 51st (Highland) Division, with tanks, on the 20th November 1917, in the Battle of Cambrai, but held for a time by a German officer with a few men; it was captured on the 21st. It was lost in the later stages of the battle, and retaken on the 27th September 1918, by the 3rd Division.

Flesquieres Hill Cemetery was originally made by the 2nd Division, in 1918, behind a German cemetery ("Flesquieres Soldiers' Cemetery No.2"); but the German graves were removed after the Armistice to FLESQUIERES COMMUNAL CEMETERY GERMAN EXTENSION (which in its turn was removed, with 583 graves, in 1924). Plots III-VIII were created on the site of the German cemetery and in them were reburied 688 British soldiers from the battlefields of Havrincourt, Flesquieres, Marcoing and Masnieres and from a few other burial grounds, including:-

ABANCOURT COMMUNAL CEMETERY GERMAN EXTENSION (Nord), in which 38 British soldiers and four men of the Chinese Labour Corps were buried in 1917-18. (The four Chinese burials were re-buried in Ayette Indian and Chinese Cemetery).

HAVRINCOURT COMMUNAL CEMETERY, from which four British soldiers were taken to Achiet-le-Grand Communal Cemetery Extension and three to Flesquieres.

HAYNECOURT GERMAN CEMETERY, on the South side of the village, from which eight British graves were removed to Flesquieres and two to H.A.C. Cemetery, Ecoust-St. Mein, and 138 German to other cemeteries.

MASNIERES-CREVECOEUR ROAD CEMETERY, CREVECOEUR SUR-L'ESCAUT, where 13 New Zealand soldiers and seven of the Devons were buried in October, 1918.

RIBECOURT CHURCHYARD, in which four Canadian, one Australian and three British soldiers were buried in 1916-1917.

63RD DIVISION CEMETERY, between MARCOING and Villers-Plouich, made by the Royal Naval Division (R.N.D.) at the end of 1917, which contained 41 graves.

There are now over 900, 1914-18 war casualties commemorated in this site. Of these, over one-third are unidentified and special memorials are erected to five officers and men from the United Kingdom and two from New Zealand, known or believed to be buried among them. Other special memorials record the names of three men of the R.N.D., buried at the end of 1917 in the 63rd Division Cemetery, Marcoing, whose graves were destroyed by shell fire.

The cemetery covers an area of 3,797 square metres.