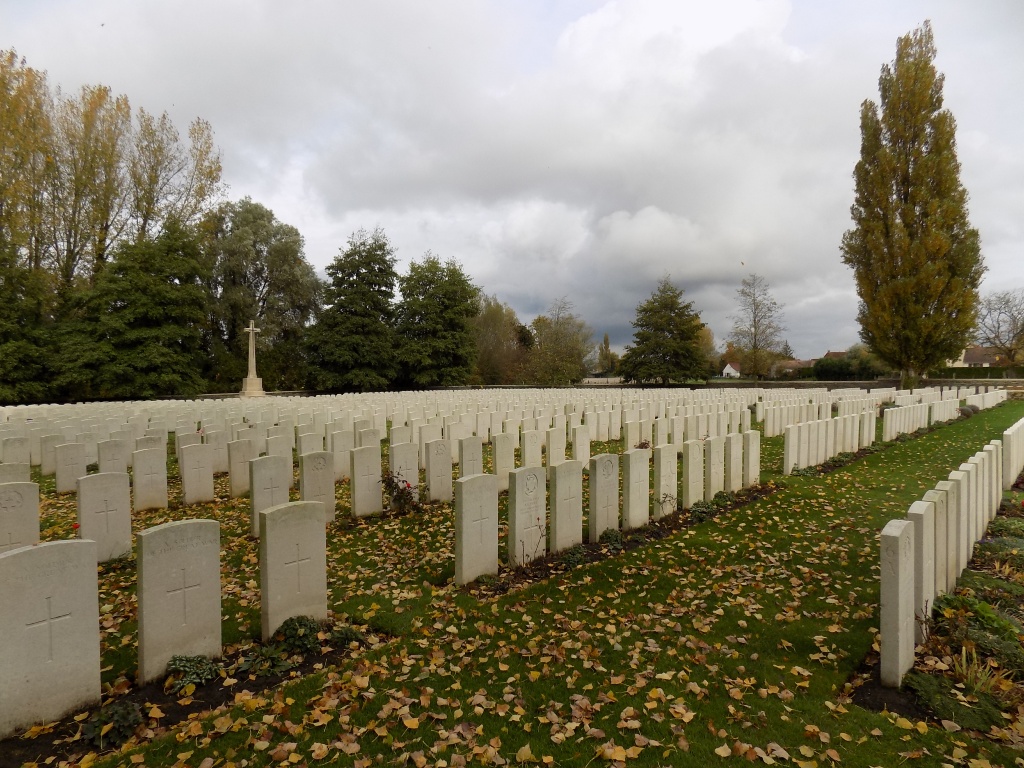 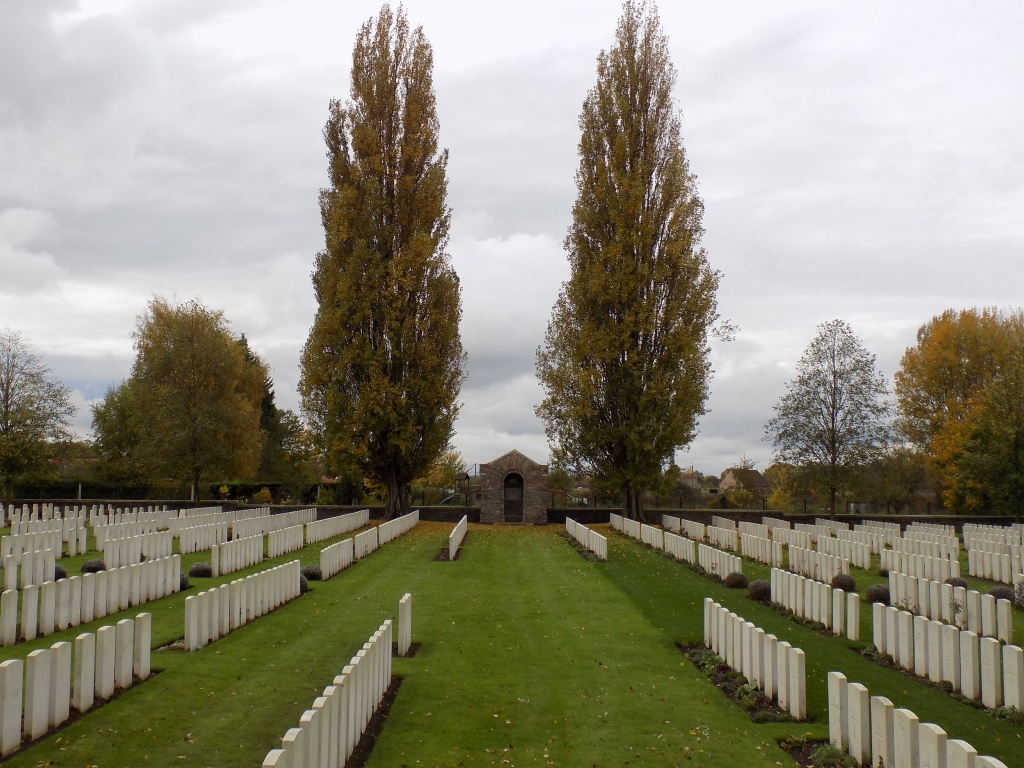 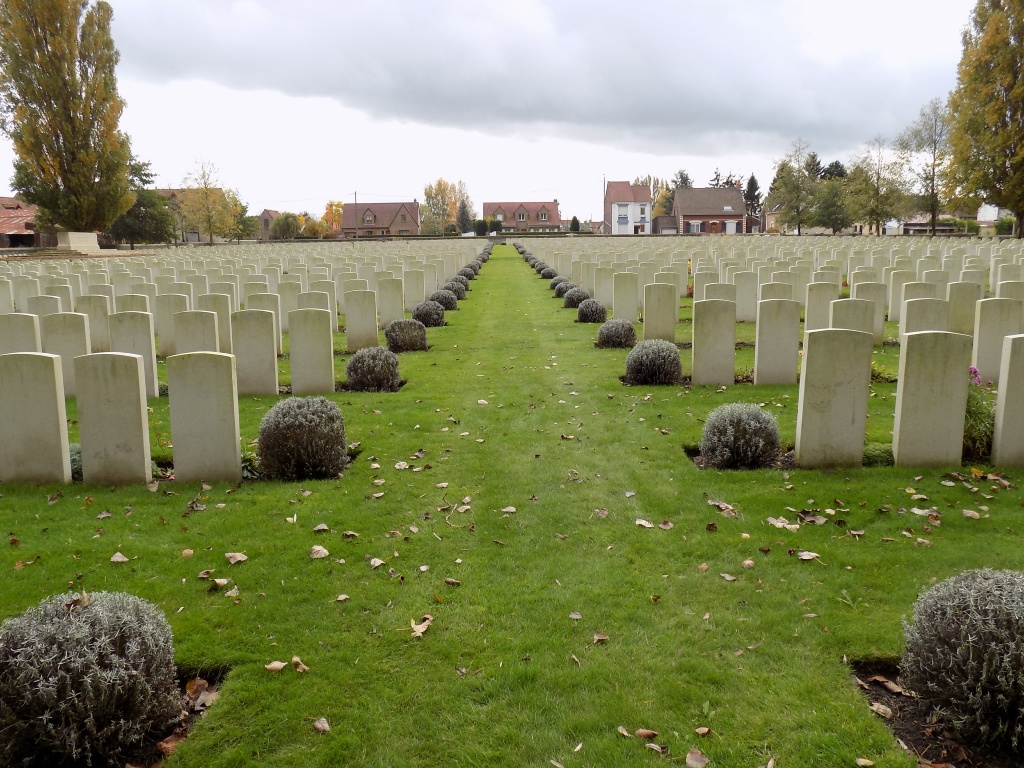 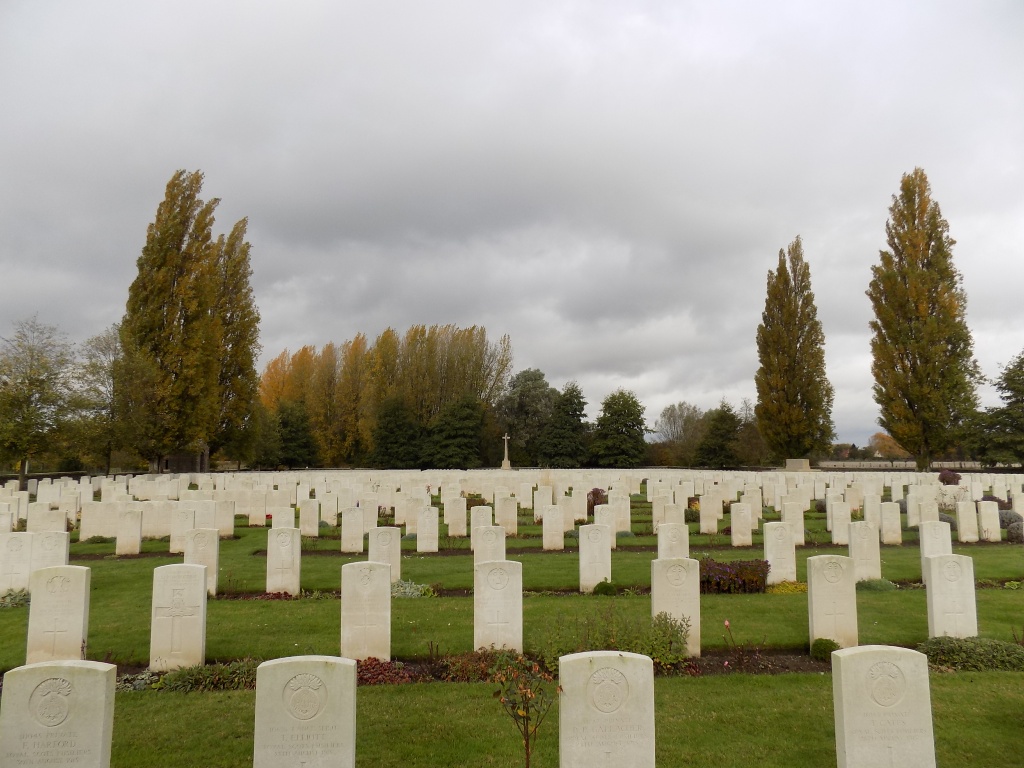 Cuinchy is a village about 7 kms east of the town of Bethune and north of the N41 which runs between Bethune and La Bassee. About 1 km north-west of the village are cross roads known as Windy Corner, and Guards Cemetery is a little west of these cross roads.

A little west of the crossroads known to the army as 'Windy Corner' was a house used as a battalion headquarters and dressing station. The cemetery grew up beside this house.

The original cemetery is now Plots I and II and Rows A to S of Plot III. It was begun by the 2nd Division in January 1915, and used extensively by the 4th (Guards) Brigade in and after February. It was closed at the end of May 1916, when it contained 681 graves. After the Armistice it was increased when more than 2,700 graves were brought in from the neighbouring battlefields - in particular the battlefields of Neuve-Chapelle, Aubers Ridge and Festubert - and from certain smaller cemeteries, including:-

BALUCHI ROAD CEMETERY, NEUVE-CHAPELLE, on the road from Pont-Logy to the "Moated Grange". It contained the graves of fifteen soldiers from the United Kingdom who fell in the winter of 1914-15.

EDWARD ROAD CEMETERY No.3, RICHEBOURG-L'AVOUE, on the South side of the Rue des Berceaux, near another "Windy Corner" (Plot I only, which contained the graves of five men of the 1st East Surreys who fell in October 1914).

INDIAN VILLAGE NORTH CEMETERY, FESTUBERT, near the intersection of "Prince's Road" and the front line of early 1915. It contained the graves of fifteen soldiers from the United Kingdom who fell in May and July 1915.

PONT-FIXE SOUTH CEMETERY, CUINCHY, on the West side of "Harley Street" (the road going South from Windy Corner), a little South of the Canal. Stretching Westward behind houses, it contained a row of 42 graves of soldiers from the United Kingdom who fell in 1915.

Guards Cemetery now contains 3,445 burials and commemorations of the First World War. 2,198 of the burials are unidentified but there are special memorials to 37 casualties known or believed to be buried among them. Other special memorials commemorate six casualties buried in Indian Village North Cemetery, whose graves were destroyed by shell fire, and four Indian soldiers originally buried in the Guards Cemetery but afterwards cremated in accordance with the requirements of their faith.