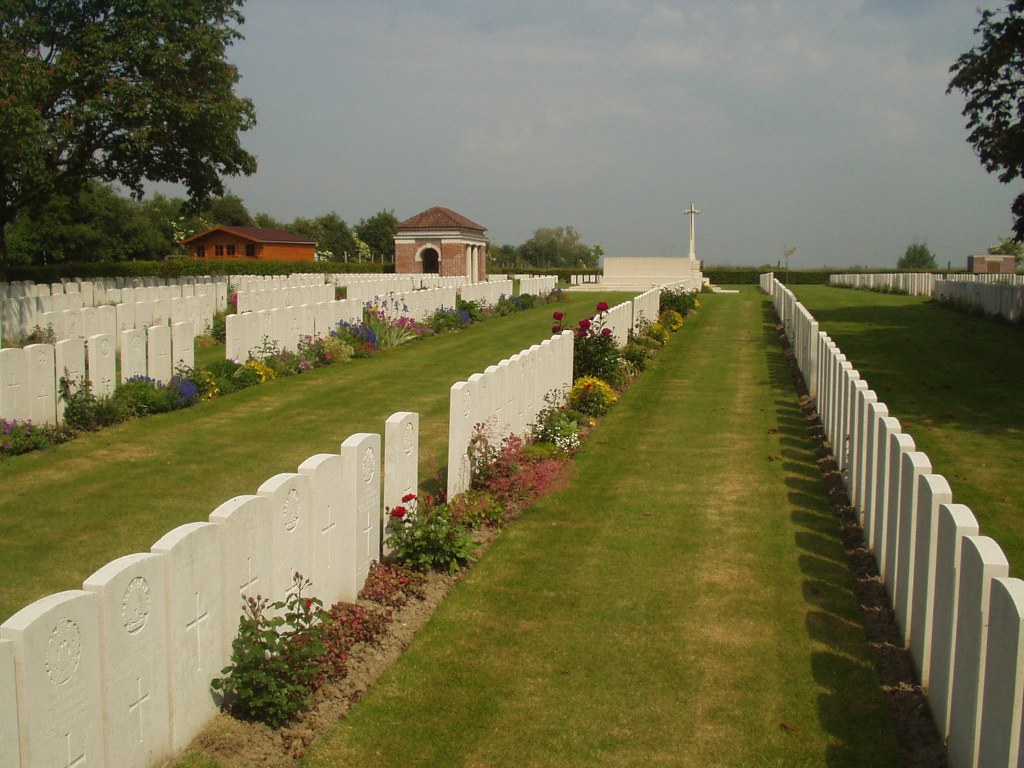 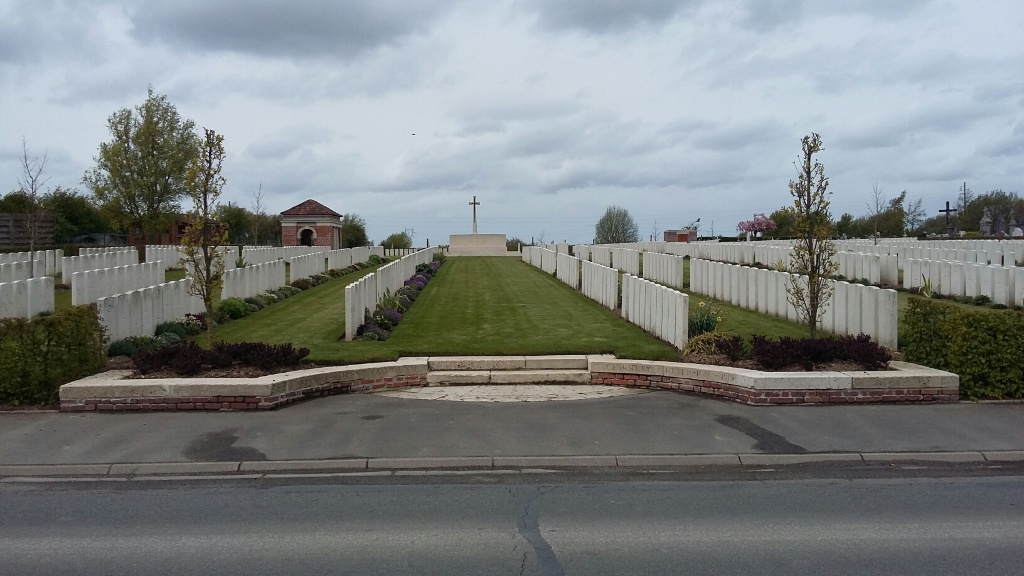 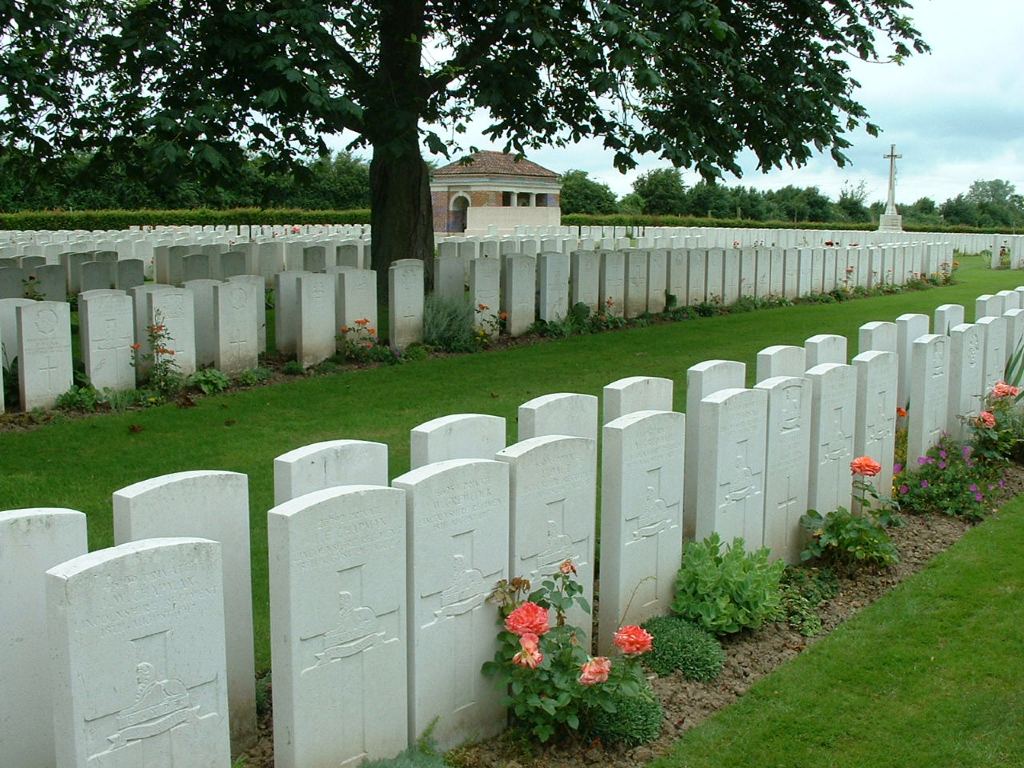 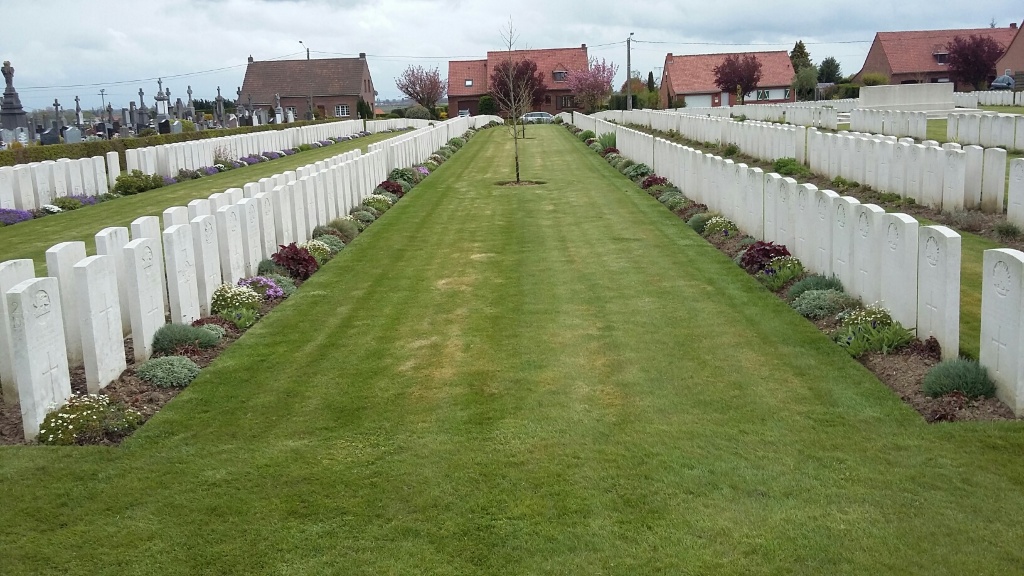 Outtersteene is a village about 5 kilometres south-west of Bailleul. The Communal Cemetery Extension is north-east of the village on the road to Bailleul. From Bailleul follow the D23 road to Outtersteene, the cemetery is on the right hand side of the road just as you approach the outskirts of the town.

Outtersteene was captured by the III Corps on 13 October 1914 but no Commonwealth burials took place there for nearly three years. In August 1917, during the Third Battle of Ypres, the 2nd, 53rd and 1st Australian Casualty Clearing Stations came to Outtersteene, and the first and last of these remained until March 1918. The hamlet was captured by the Germans on 12 April 1918, and retaken by the 9th, 29th and 31st Divisions, with the ridge beyond it, on 18 and 19 August, but the cemetery was not used again during hostilities. After the Armistice, over 900 graves of 1914 and 1918 were brought into Plots I, II and IV from the battlefields surrounding Outtersteene and from certain small cemeteries, including:- STRAZEELE ROAD CEMETERY, STRAZEELE, about 800 metres West of Strazeele, which is North-West of Outtersteene. Here were buried 18 soldiers from Australia and one from the United Kingdom, who fell in May, June and August 1918. CAESTRE ROAD CEMETERY, on the North side of Strazeele, containing the graves of nine soldiers from Australia, three from the United Kingdom, one from Guernsey, and two of unknown units, who fell in April 1918. VIEUX-BERQUIN COMMUNAL CEMETERY EXTENSION, on the road from Outtersteene to Vieux-Berquin. In this Extension, on the East side of the Communal Cemetery, were buried 17 soldiers from the United Kingdom and one from Australia, who fell in August and September 1918. 1,147 German graves were initially concentrated into Plot III. These were later removed to Steenwerck German Cemetery. The extension was used again in 1940, for the burial of those killed in the fighting which covered the withdrawal of the British Expeditionary Force to Dunkirk. Outtersteene Communal Cemetery Extension now contains 1,393 Commonwealth burials and commemorations of the First World War. 499 of the burials are unidentified but there are special memorials to 14 casualties known or believed to be buried among them. Second World War burials number 72, of which 23 are unidentified. The extension was designed by Sir Herbert Baker.