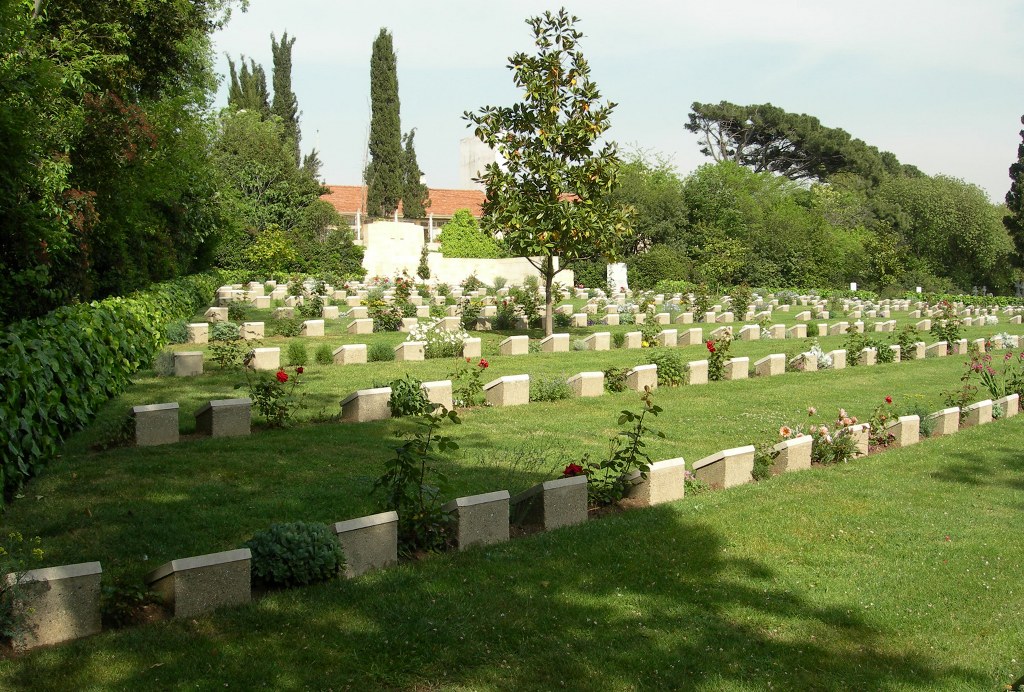 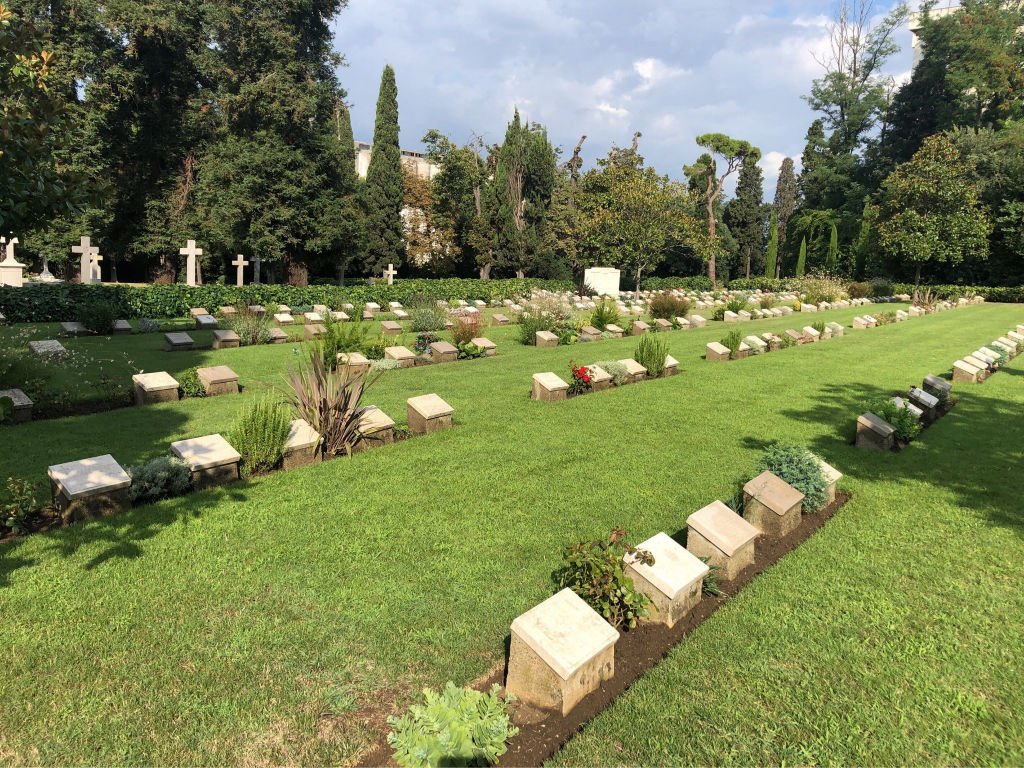 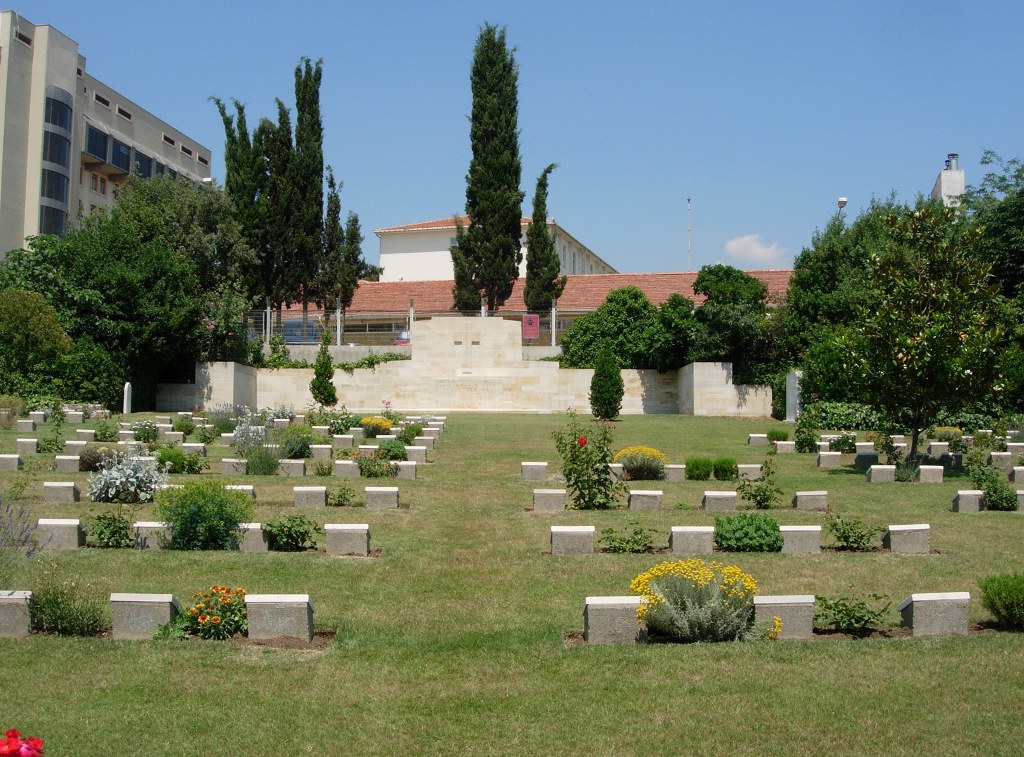 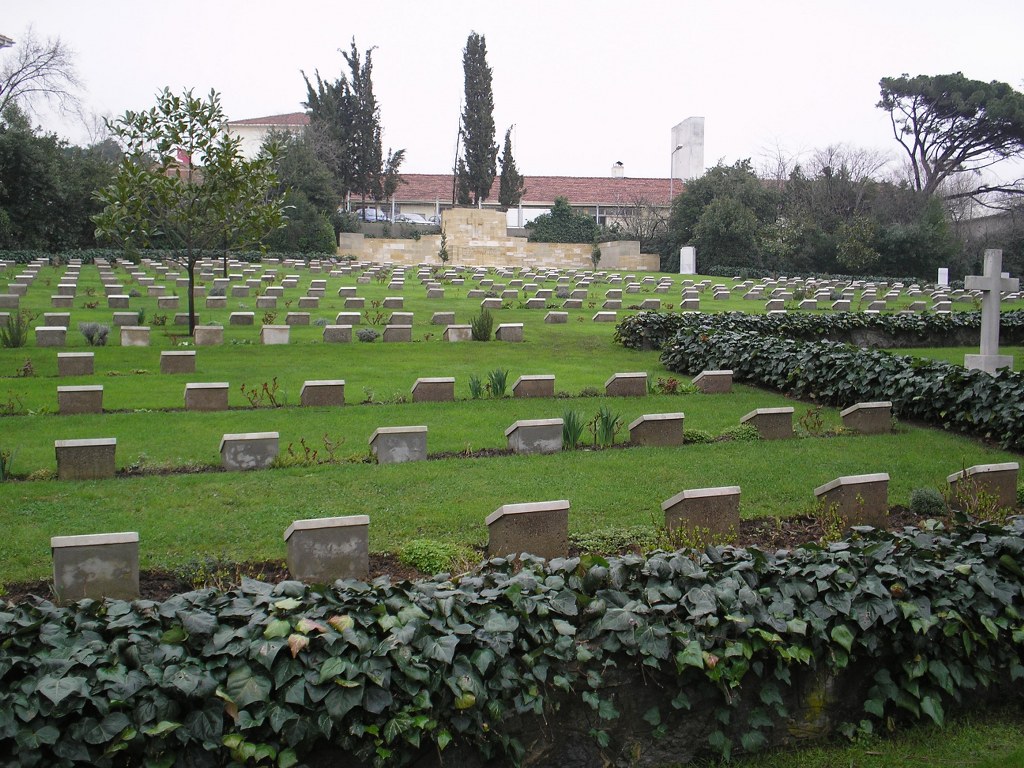 Haidar Pasha is a suburb of Istanbul between Scutari (Uskudar) and Kadikoy on the Asiatic side of the Bosphoros. The cemetery is on high ground behind the Haidar Pasha pier head and railway station. • Take the ferry from Kadikoy, near the Galata Bridge, to Haidar Pasha pier head and railway station, which is about 275 metres further from the old railway station. • Turn left through the bus station in the direction of the mosque with twin minarets. With the mosque to your left, you will see steps on your right leading up to the Kadikoy Rihtimi Cad Road. Turn left (northwards) along this road (passing over the railway lines) and continue for approximately 700 metres. • At the traffic lights turn left down towards the main entrance to the cemetery which is accessed by a large path to the right hand side as you face the military hospital gate. Soldiers are usually present at the entrance to the hospital in order to check all vehicles entering the military area. Please be aware that the main access path is easily missed because taxis frequently block the view. A small chain is placed across the entrance to the path in order to prevent access by vehicles. However the cemetery is very easy to access by pedestrians. Please note there is a rear gate to the cemetery from the railway side but this is kept locked for security reasons.

Access to the cemetery is via the main entrance only.

Closed at weekends and Public Holidays.

If we are given advance notice of a special circumstance where access is required outside of the opening hours shown above, we can arrange to have the cemetery opened. Please call the CWGC's Country Manager on +90 5327001934 (08:00 - 17:00)

For any other enquiries please email enquiries@cwgc.org

HAIDAR PASHA CEMETERY was given by the Turkish Government to the British Government in 1855, and contains about six thousand graves of the Crimean War, mostly the result of a cholera epidemic in Istanbul. An imposing grey granite obelisk erected by the British Government of that era commemorates the British dead. In 1867 the cemetery was made available for British civilian burials, and there is a separate section for such graves. During the First World War the cemetery was used by the Turkish forces for the burial of Commonwealth prisoners of war and after the Armistice, when Istanbul was occupied, further burials were made, mainly from No.82 General Hospital. In addition, 119 graves were brought in from the following smaller cemeteries:- Bostandjik Muslim Cemetery, Eregli Armenian Cemetery, Ferikoi Protestant Cemetery, Ismid Latin Catholic Cemetery, Karaman Cemetery, Kars British and Russian Cemeteries, Mashlak Muslim Cemetery, Osmanieh Muslim Cemetery, Prinkipo Roman Catholic Cemetery and San Stefano French Cemetery.

During the Second World War, Turkey retained her neutrality and those Commonwealth servicemen buried there were mainly men taken prisoner during operations in the Aegean, who died while attempting to escape from camps where they awaited transport to Germany and Italy, and whose bodies were washed up on the Turkish coast.

Also within the cemetery, which the Commission maintains as a whole, are about 6,000 Crimean graves, mostly unmarked, and numerous non war military and civilian graves and memorials.

Within the war graves plot stands the HAIDAR PASHA CREMATION MEMORIAL, which commemorates 122 soldiers of the Indian Army who died in 1919 and 1920 who were originally commemorated at Mashiak and Osmanieh Cemeteries. In 1961 when these cemeteries could no longer be maintained, the ashes of the Hindus, whose remains were cremated in accordance with their faith, were scattered near this memorial, while the remains of their comrades of the Muslim faith were brought here and re-interred.

The war graves plot also contains the HAIDAR PASHA MEMORIAL, which was erected to commemorate more than 30 Commonwealth servicemen of the First World War who died fighting in South Russia, Georgia and Azerbaijan, and in post Armistice operations in Russia and Transcaucasia, whose graves are not known.