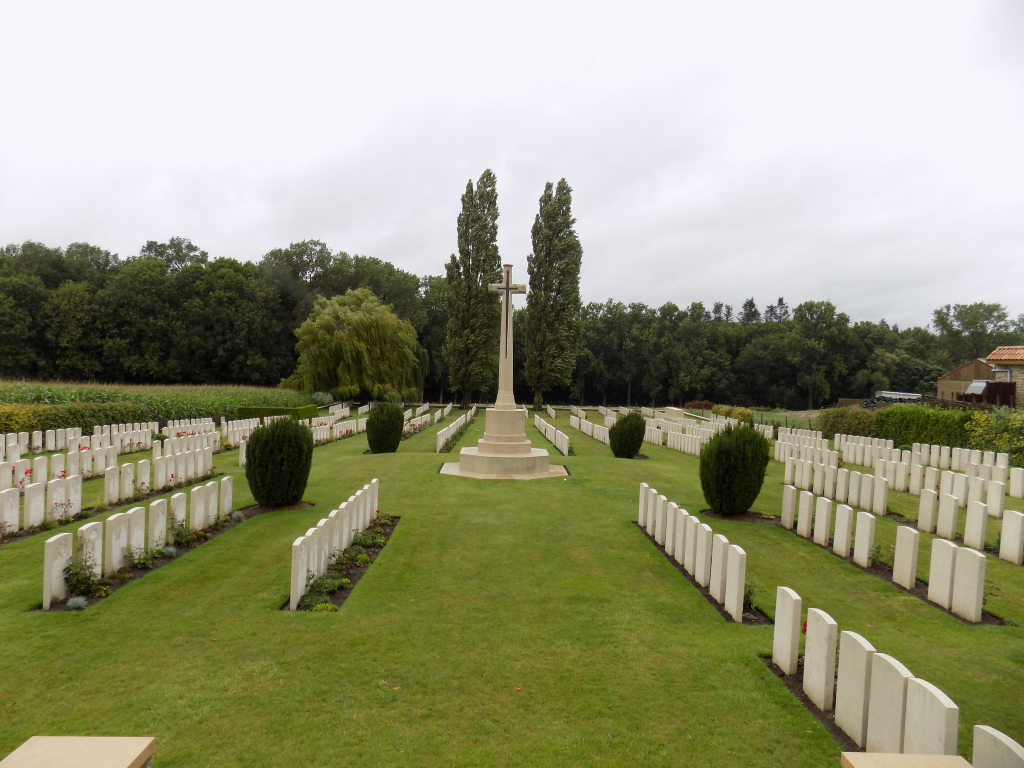 Wytschaete Military Cemetery is located 7 Kms south of Ieper town centre, on a road leading from the Rijselseweg N365, which connects Ieper (formerly Ypres) to Wijtschate (Wytschaete) and on to Armentieres. From Ieper town centre the Rijselsestraat runs from the market square, through the Lille Gate (Rijselpoort) and directly over the crossroads with the Ieper ring road. The road name then changes to the Rijselseweg. The first right hand turning on reaching the village of Wijtschate leads onto the Hospicestraat, leading to the village square. The Wijtschatestraat leads from the village square, 500 metres beyond which lies the cemetery on the right hand side of the road.

Wytschaete (now Wijtschate) was taken by the Germans early in November 1914. It was recovered by Commonwealth forces during the Battle of Messines on 7 June 1917, but fell into German hands once more on 16 April 1918. The village was recovered for the last time on 28 September. The cemetery was made after the Armistice when graves were brought in from isolated positions surrounding Wytschaete and the following small battlefield cemeteries:- REST AND BE THANKFUL FARM, KEMMEL: 23 UK burials (13 of them 2nd Suffolks), mostly of 1915. R.E. (BEAVER) FARM, KEMMEL: 18 Royal Engineer and four Canadian Engineer burials of 1915-1917. The CEMETERY NEAR ROSSIGNOL ESTAMINET, KEMMEL: 18 UK burials (11 of the 1st Wiltshire Regiment), of January-April 1915. SOMER FARM CEMETERY No.2, WYTSCHAETE: 13 UK burials made by IXth Corps in June 1917. GORDON CEMETERY, KEMMEL: 19 UK burials (14 of them 1st Gordon Highlanders) of January-May 1915. There are now 1,002 servicemen of the First World War buried or commemorated in this cemetery. 673 of the burials are unidentified, but there are special memorials to 16 casualties known or believed to be buried among them. Other special memorials commemorate casualties known to have been buried at the Cemetery near Rossignol Estaminet, RE (Beaver) Farm and Rest and be Thankful Farm, whose graves could not be found on concentration. The cemetery was designed by Sir Edwin Lutyens.