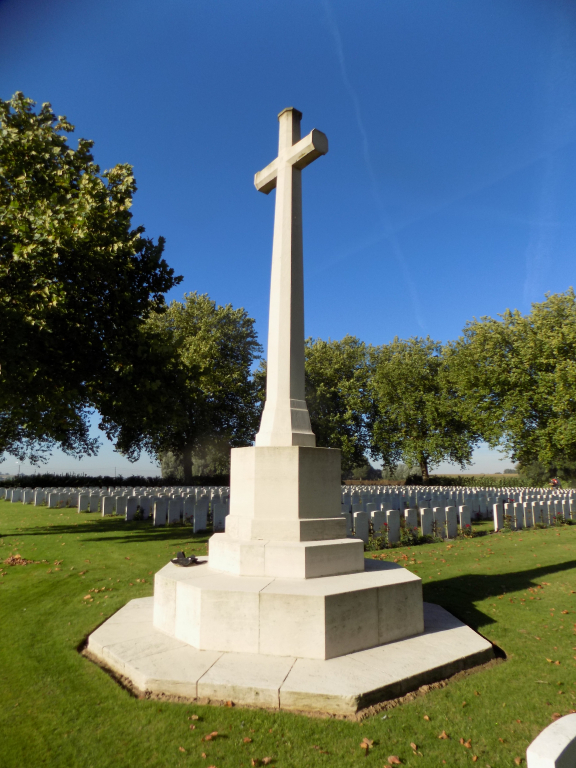 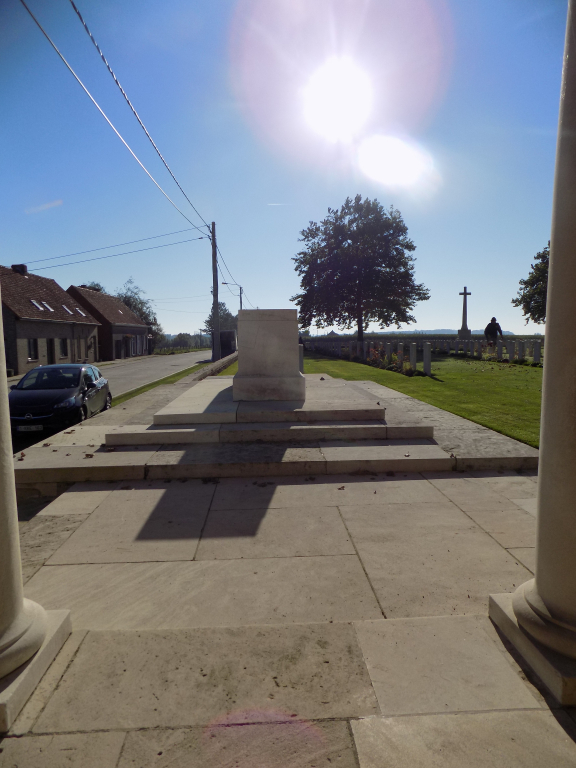 Wulverghem-Lindenhoek Road Military Cemetery is located 13 Kms south of Ieper town centre, on a road leading from the Kemmelseweg N331 connecting Ieper to Kemmel. From Ieper town centre the Kemmelseweg is reached via the Rijselsestraat, through the Lille Gate (Rijselpoort) and straight on towards Armentieres (N365). 900 metres after the crossroads is the right hand turning onto the Kemmelseweg (made prominent by a railway level crossing). 2 Kms after passing the village of Kemmel lies the left hand turning onto the Hooghofstraat. The cemetery lies 1.5 Kms along the Hooghofstraat on the right hand side of the road.

The cemetery was begun in December 1914 by four battalions of the 5th Division and was called at first Wulverghem Dressing Station Cemetery. It was used until June 1917, and again in September and October 1918, and at the Armistice it contained 162 graves, the present Plot I. Graves were then brought in from the surrounding battlefields and the following smaller burial grounds:- AUCKLAND CEMETERY, MESSINES, on the North bank of the Douve between Messines and Wulverghem, contained the graves of twelve New Zealand soldiers (including nine of the 2nd Auckland Regiment) who fell on the 7th June, 1917. CORNWALL CEMETERY, MESSINES, 150 metres West of Auckland Cemetery, contained the graves of 21 soldiers from the United Kingdom (including 20 of the 1st D.C.L.I.) who fell in December, 1914-January, 1915. FRENCHMAN's FARM, WULVERGHEM, nearly 600 metres North of the village, contained several groups of graves; and in them were buried 29 soldiers from the United Kingdom and one French soldier who fell in 1914-15. NEUVE-EGLISE NORTH CEMETERY was on the Neuve Eglise-Lindenhoek road. It contained the graves of 20 soldiers from the United Kingdom who fell on the 2nd and 3rd September, 1918, and of whom 16 belonged to the 1st Royal Irish Fusiliers. NEUVE-EGLISE RAILWAY HALTE (or RAILWAY SIDING) CEMETERY was at the light railway station on the South side of the village. It contained the graves of 14 soldiers from the United Kingdom (including seven of Queen Victoria's Rifles) who fell on the 5th January, 1915. These formed Plots II-V. Within these later plots almost the whole period of the war is represented, in particular the defence of the Kemmel front in April 1918 and the final advance of September 1918. There are now 1,010 Commonwealth servicemen of the First World War buried or commemorated in this cemetery. 352 of the burials are unidentified, but there are special memorials to two casualties believed to be buried among them and to seven others buried elsewhere whose graves were destroyed in the fighting of 1917-18. The cemetery was designed by Charles Holden.