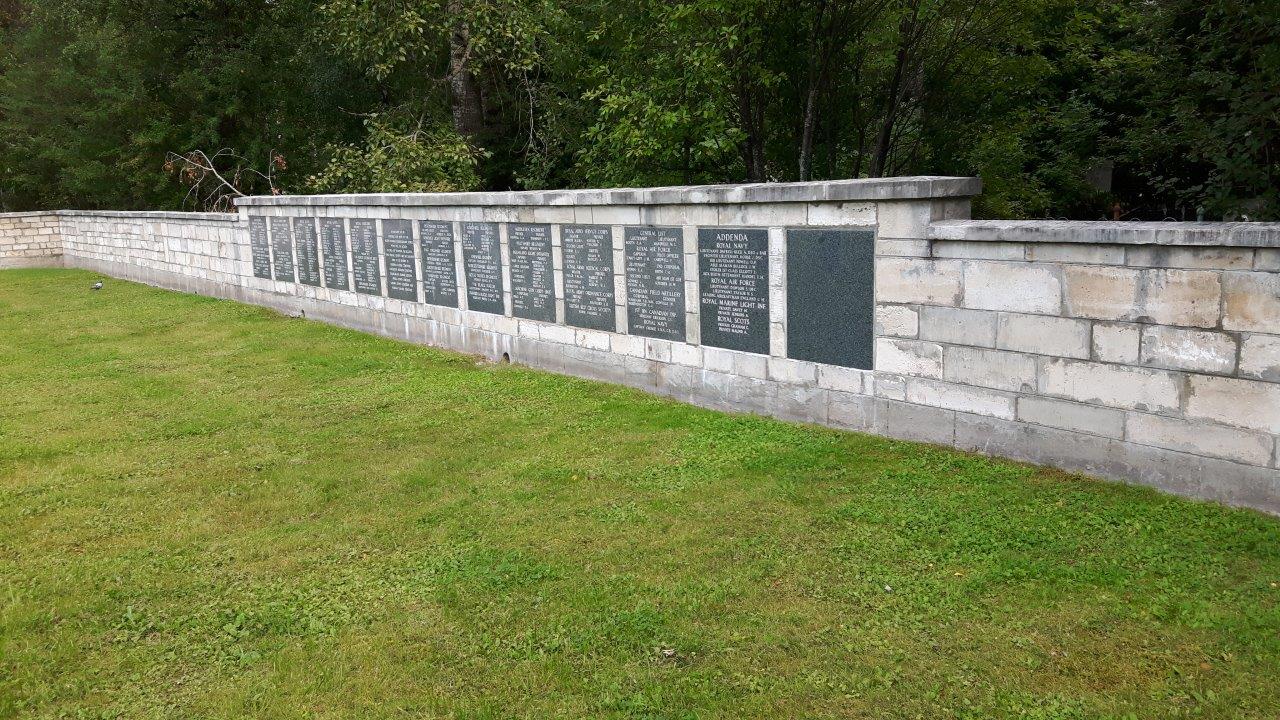 Archangel, in the north of the Russian Federation, is a town on the eastern side of the Dvina Estuary on the White Sea. The Archangel Memorial is at the far end of Archangel Allied Cemetery, which is on the north-west outskirts of the town of Archangel, adjoining the Lutheran and Russian cemeteries and memorials to those who died in more recent actions. From the railway station, travel along the main road towards the River Dvina. Halfway along this road take the turning on the right hand side called Obvodnyi Kanal Avenue. The cemetery will be found on the right hand side of this road.

The ARCHANGEL MEMORIAL, which consists of panels fixed into the east wall of the cemetery, commemorates 219 British officers and men who died in Russia, particularly during the north Russian campaign and whose graves are not known.

The War Graves and Memorials in the Soviet Republics of Eastern Europe are a result of the campaigns of 1918-1920 in several parts of European Russia. These campaigns, which were the outcome of the Russian Revolution of November, 1917, are closely connected both with events in Asia (particularly in Persia and in Siberia) and with the general course of the War in the West. The continued German and Turkish threats to India by way of Persia and Afghanistan, and the crisis of 1918 in France caused by the withdrawal of Russia from the Entente, form the background to the North Russian Expedition and the Allied intervention in South Russia, which are summarised in the following narrative.

In the spring of 1918 the main Russian Government, neutral towards Germany and Austria, was surrounded by various hostile regional Governments on the fringes of the former Russian Empire. Its Western front was open, and German troops had been transferred in very large numbers to France. Finland, independent since December, 1917, was torn by the struggle between "White" and "Red", and strong German forces entered the country and secured, in May, 1918, the ascendency of the "White" Government. The North Russian ports, through which the Allies had assisted Russia with supplies and munitions, were now open to German occupation. The Black Sea, the Caucasus and the Caspian Sea were as yet beyond the reach of Allied forces, and the Russian half of the barrier between the Central Powers and India had failed. Lastly, there had emerged from the late Russian armies the two Czechoslovak Divisions, formed of ex-Austrian prisoners, which were known to be making for Archangel or Vladivostok in order to join the Allies. All these facts suggested intervention; it took the form of landings in the North and Military and Naval Missions, armaments and stores in the South and East. The Northern expedition lasted from 1918 to 1919, and was a separate military operation. The intervention in the South was linked with the advance of detachments from the Allied armies in Greece and Mesopotamia, and it lasted from 1919 to 1920. In April, 1918, a force of 150 Royal Marines landed at Murmansk, off which a British battleship had for some time been stationed. By the end of May 500 British Marines and sailors, 300 French soldiers, 1,400 Serbian soldiers and 500 Finnish "Red Guards" (the Finnish Legion) were holding the Kola Peninsula and Kandalaksha. The danger at present lay in Finland, and the Murman force, gradually strengthened, occupied the line of the Murmansk railway as far South as Soroka by the end of June. These operations were begun with the consent of the main Russian Government. On the 1st-2nd August, 1918, another Allied force occupied Archangel. It advanced in August and September Westward to Onega and South and South-East, along the Vologda railway and the Dvina, to Yemtsa and beyond Bereznik (Semenovka). Behind these two forces were the friendly local Soviets, but already both had become engaged in hostilities with the Russian Bolshevik troops. On the 18th September Admiral Kolchak announced the formation of an anti-Bolshevik Government and "assumed power" over all the Russias, basing himself on Siberia and the South. By October, 1918, nearly 20,000 British, French, American, Italian, Polish and Russian troops were on the Archangel front, and nearly 15,000 British, French, Italian, Serbian and Russian on the Murmansk front. The danger from Finland disappeared in December, with the withdrawal of the German troops and the establishment of a friendly Coalition Government; the hope of junction with the Czechs was disappointed. The winter was spent in repelling determined Bolshevik attacks on the Archangel force and in advancing the forward positions of the Murmansk force beyond Segeja. With the early spring of 1919 news arrived of considerable successes won by Admiral Kolchak in the East and by General Denikin, the "White Russian" commander in the South; but in March and April the Allied Governments decided on an early evacuation of North Russia. War against the Bolshevik Government had not been one of their objects. The two North Russian forces were to be strengthened, disengaged by local offensives, and withdrawn; the friendly Governments were to be helped to establish themselves, if possible, on a firm military basis; and the Siberian army of Admiral Kolchak might perhaps be linked, before the Allied soldiers left, with the troops of the Archangel Soviet. General Lord Rawlinson was sent to co-ordinate the operations. Only the first of these aims could be realised. The Murmansk force reached Lake Onega by the 18th May and fought small actions on or near the lake through the summer; it captured Lijma on the 14th-16th September, and within another month it had successfully evacuated Murmansk. The Archangel force, fighting on a wider front and more severely attacked, won the Battle of Troitsa on the 10th August, and evacuated Archangel without further difficulty on the 27th September. The friendly Governments held out for some months, but the Bolsheviks entered Archangel on the 20th February, 1920. On the Finnish border fighting between Soviet forces and Finnish troops or Karelian insurgents continued at intervals until the end of 1921. Kolchak's Siberian forces were decisively defeated in the summer of 1919. Denikin, after a successful summer campaign which reached as far as Kiev in September, was driven back throughout the winter of 1919-20 until his last position, at Novorossisk, was lost in March. In November, 1920, General Wrangel, who still held the Crimea, was forced out of Sevastopol, and organised resistance to the Russian Soviet Government ended.