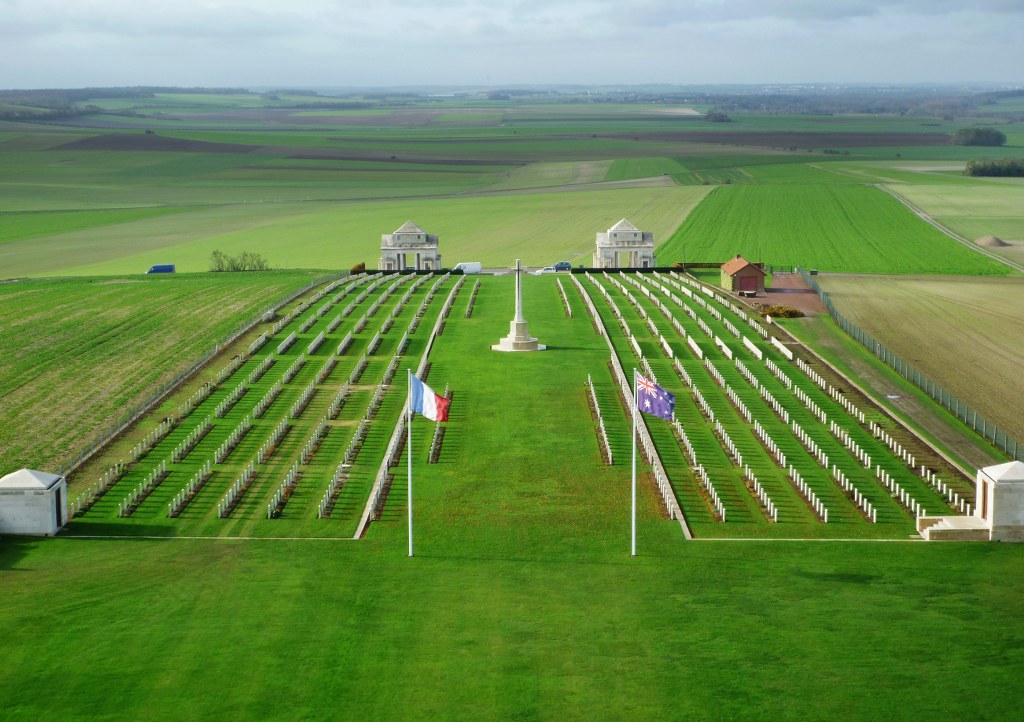 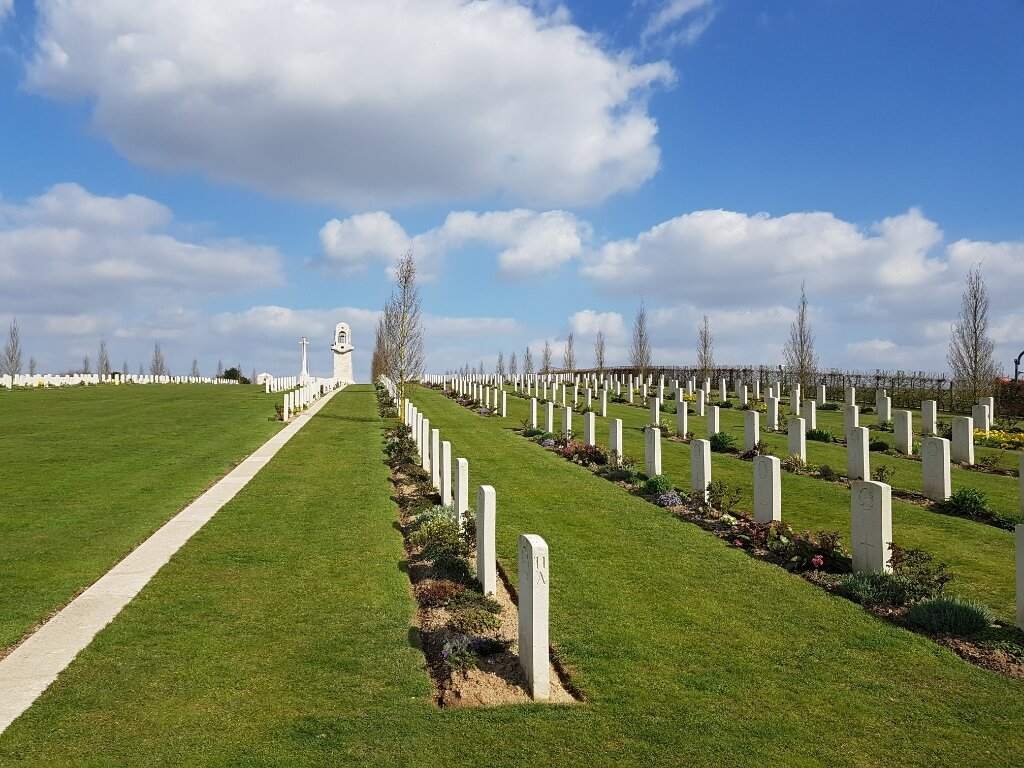 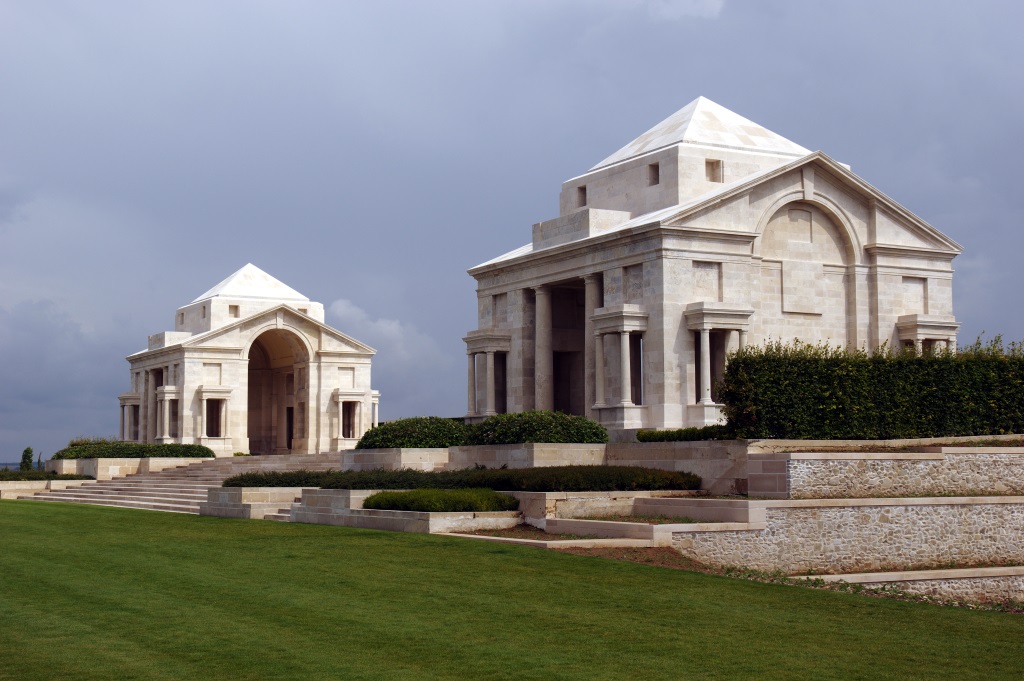 Villers-Bretonneux is a village 16 kilometres east of Amiens on the straight main road to St Quentin. The Cemetery is about 2 kilometres north of the village on the east side of the road to Fouilloy.

Wheelchair access to Villers-Bretonneux Cemetery and the Australian National Memorial is via a ramp or lift next to the new orientation building in the car park.

VILLERS-BRETONNEUX MILITARY CEMETERY was made after the Armistice when graves were brought in from other burial grounds in the area and from the battlefields. Plots I to XX were completed by 1920 and contain mostly Australian graves, almost all from the period March to August 1918. Plots IIIA, VIA, XIIIA and XVIA, and Rows in other Plots lettered AA, were completed by 1925, and contain a much larger proportion of unidentified graves brought from a wider area. Later still, 444 graves were brought in from Dury Hospital Military Cemetery.

The following were among the burial grounds from which graves were taken to Villers-Bretonneux Military Cemetery.

CARD COPSE CEMETERY, MARCELCAVE, on the road to Fouilloy, where 35 Australian soldiers were buried by the 2nd Australian Division in July and August 1918.

DURY HOSPITAL MILITARY, CEMETERY, under the wall of the Asylum near the West side of the Amiens-Dury road. From August 1918 to January 1919, this building was used intermittently by British medical units, and a cemetery was made next to an existing French Military Cemetery. The British cemetery contained the graves of 195 Canadian and 185 United Kingdom soldiers and airmen; 63 Australian soldiers; one man of the Cape Auxiliary Horse Transport Corps; and one French and one American soldier.

HIGH CEMETERY, SAILLY-LE-SEC, on the road to Ville-sur-Ancre, where 18 United Kingdom and eleven Australian soldiers were buried in June-August 1918.

KANGAROO CEMETERY, SAILLY-LE-SEC (on the Ville-sur-Ancre road, but nearer Sailly), where 13 Australian soldiers were buried by the 41st Battalion in March-April 1918, and 14 of the 58th (London) Division by their comrades in August 1918.

LAMOTTE-EN-SANTERRE COMMUNAL CEMETERY EXTENSION. The village was captured by Australian troops on the 8th August 1918, and the Extension contained the graves of 56 Australian and twelve United Kingdom soldiers who fell in August and September.

LA NEUVILLE-LES-BRAY COMMUNAL CEMETERY, containing the grave of one Australian soldier who fell in August 1918.

MIDWAY CEMETERY, MARCELCAVE, 1,400 metres North-West of Marcelcave Church, made by the Canadian Corps and containing the graves of 53 Canadian and three United Kingdom soldiers who fell in August 1918.

WARFUSEE-ABANCOURT COMMUNAL CEMETERY EXTENSION, in which five Australian soldiers were buried by the 12th Australian Field Ambulance in August 1918.

There are now 2,146 Commonwealth servicemen of the First World War buried or commemorated in this cemetery. 609 of the burials are unidentified but there are special memorials to five casualties known or believed to be buried among them, and to 15 buried in other cemeteries whose graves could not be found on concentration. The cemetery also contains the graves of two New Zealand airmen of the Second World War.

Within the cemetery stands the VILLERS-BRETONNEUX MEMORIAL, the Australian national memorial erected to commemorate all Australian soldiers who fought in France and Belgium during the First World War, to their dead, and especially to name those of the dead whose graves are not known. Over 10,000 Australian servicemen are named on the memorial. The memorial was unveiled by King George VI on 22 July 1938.

The cemetery and the memorial were both designed by Sir Edwin Lutyens.