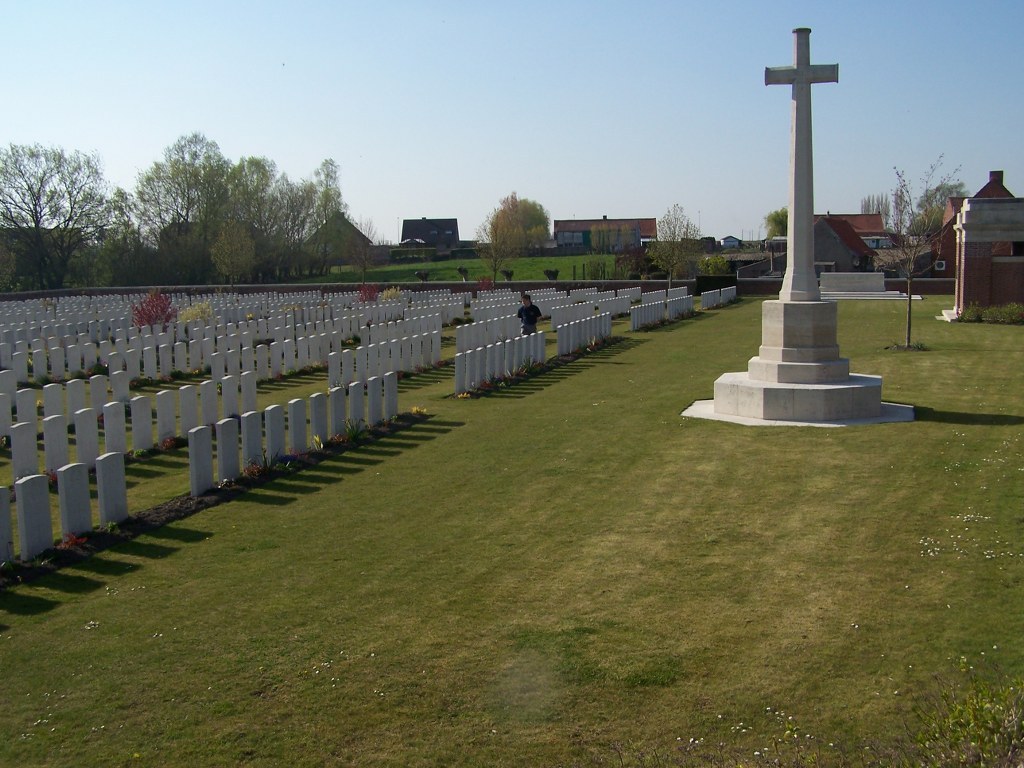 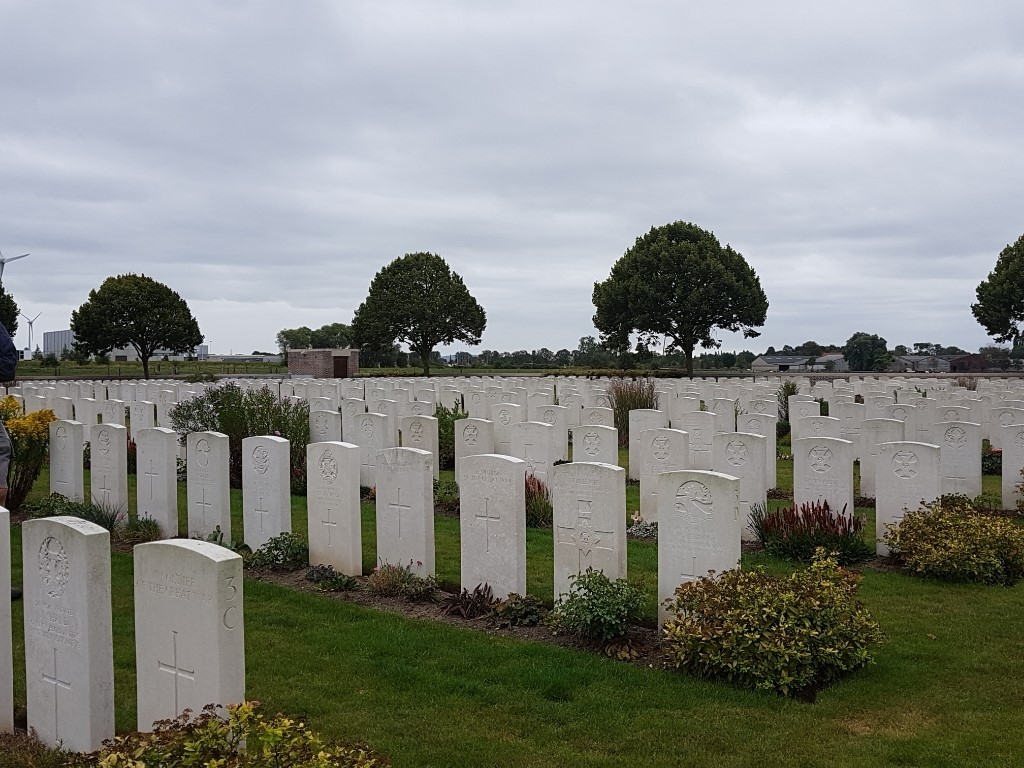 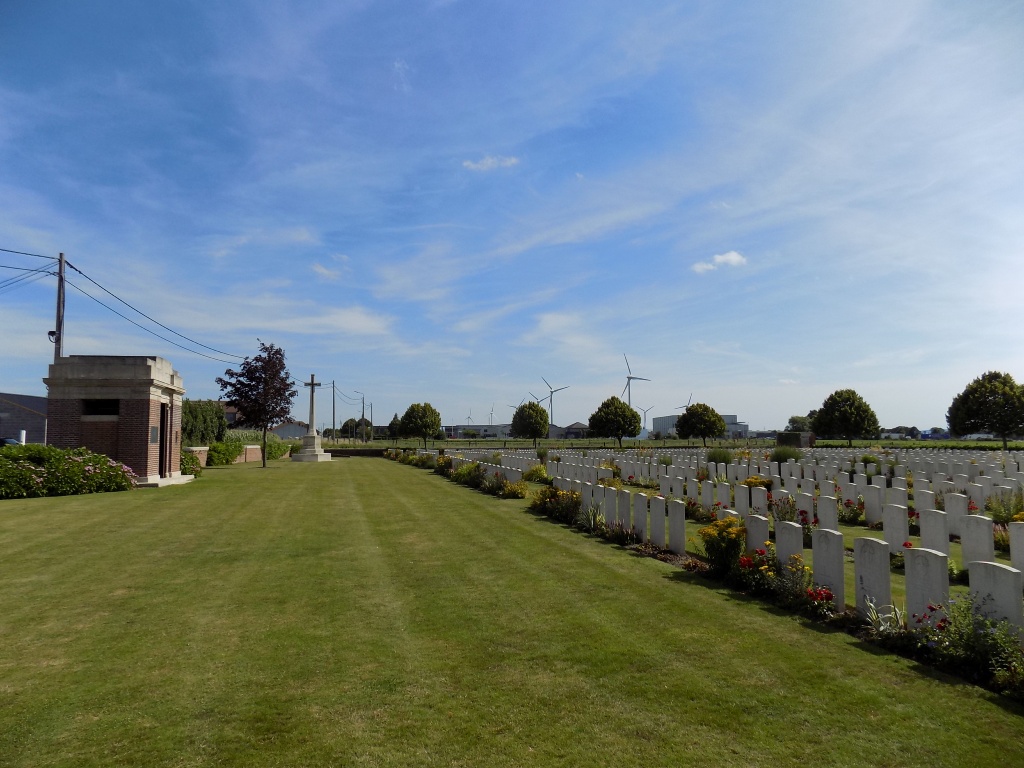 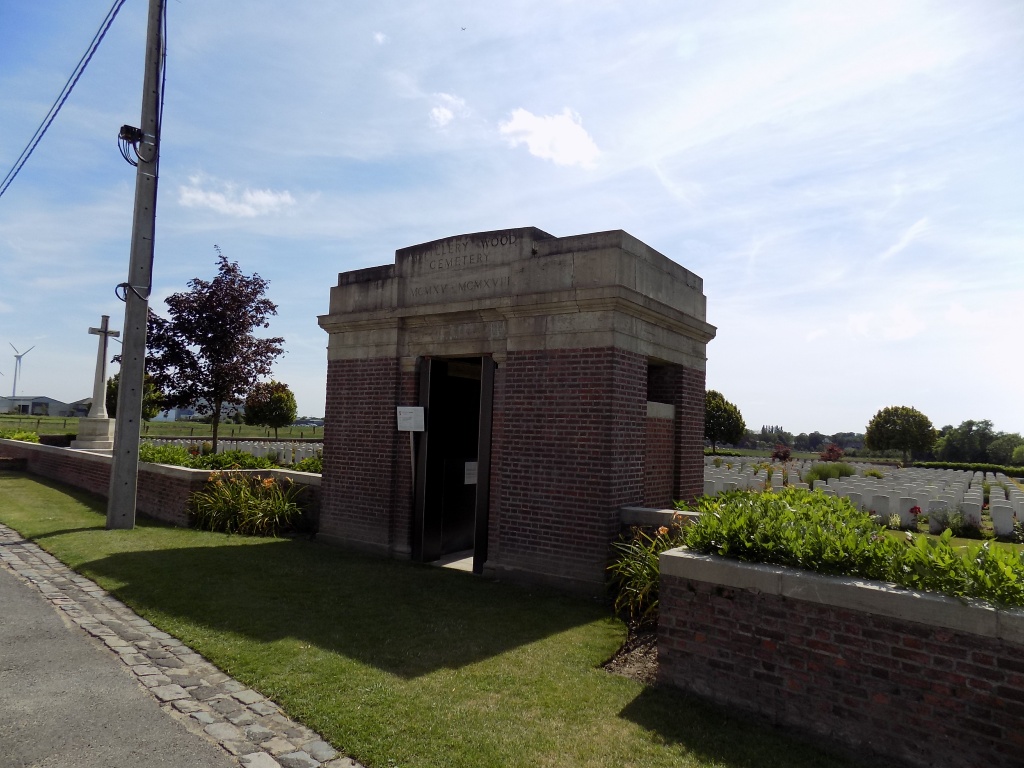 Boezinge is located north of the town of Ieper on the N369 road in the direction of Diksmuide. The Cemetery is located in the Poezelstraat, east of the village. From the station turn left along the Diksmuidseweg then take the second turning right into Brugstraat. Go to the end of Brugstraat, over the bridge, and straight on along Molenstraat. Poezelstraat is the second turning on the right after the bridge and the cemetery is on the right hand side, about 200 metres from the junction of Molenstraat.

Until July 1917, the village of Boesinghe (now Boezinge) directly faced the German front line over the Yser canal, but at the end of that month, the Battle of Pilckem Ridge pushed the German line back and Artillery Wood, just east of the canal, was captured by the Guards Division. They began the cemetery just north of the wood when the fighting was over and it continued as a front line cemetery until March 1918. At the time of the Armistice, the cemetery contained 141 graves (of which 42 belonged to the Royal Artillery), but it was then greatly enlarged when graves were brought in from the battlefields and small burial grounds around Boesinghe, including the following:- BOESINGHE CHATEAU GROUNDS CEMETERY, on the South-West side of the road between the village and the station, containing 19 graves of soldiers from the United Kingdom (mainly of the Guards Division) who fell in June-August 1917. BRISSEIN HOUSE CEMETERY, BIXSCHOOTE, 2 Km North of Langemarck village, a French Military Cemetery in which 22 soldiers from the United Kingdom were buried in December 1917-March 1918. CAPTAIN'S FARM CEMETERY, LANGEMARCK, 3 Km West of Langemarck village, a group of graves in which 63 soldiers from the United Kingdom were buried in July 1917-March 1918, chiefly by the Guards and 29th Divisions. There are now 1,307 First World War casualties buried or commemorated in this cemetery. 506 of the burials are unidentified but special memorials commemorate 12 casualties known or believed to be buried among them. The cemetery was designed by Sir Reginald Blomfield.