Frequently Asked Questions about our documents

This collection of documents was assembled by the Commonwealth War Graves Commission and its predecessors as part of the processes involved in the commemoration of individuals. As a result, they contain many corrections and alterations which reflect their use as working documents. For further information concerning the history of the collection, see our About Our Records page.

Please be advised that some of the documents, especially the burial returns and exhumation reports, may contain information that some people may find distressing. The original archive records and their digital copies remain the property of the Commonwealth War Graves Commission but are available for re-use for private and non-commercial purposes.

The following types of documents are available to download from the CWGC Casualty Database. See below to find out what information they contain and how they were used by the CWGC. 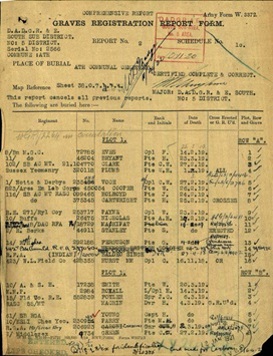 Grave Registration Reports (GRRs) are standard forms which record details of all graves for which the CWGC is responsible. They provide basic details of the individuals, such as name, service number, rank, regiment, unit and date of death, and are listed in Plot, Row and Grave order. The CWGC used GRRs only for burials in countries where it was responsible for registering graves. Where the Army Graves Service was responsible for registration, the CWGC was supplied with a document called a Certified Comprehensive Report, which contained similar information to a GRR. GRRs contain a number of abbreviated words and phrases. Please consult our glossary for details. 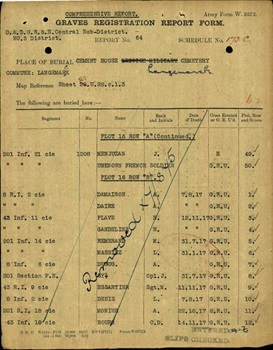 These are draft working copies of the final Grave Registration Reports and are indicated as such by being completely struck through as 'Cancelled' or 'Removed'. Often these refer to graves that were either reorganised within a cemetery or removed (in particular the graves of foreign nationals). As a result, the grave details shown in these documents may differ from those shown in the final version. 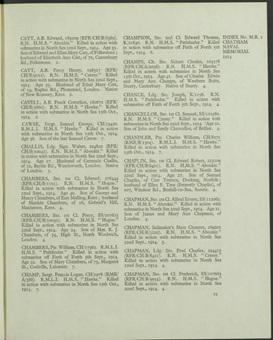 After the end of both world wars, the CWGC compiled a full list of all of the war dead it was responsible for commemorating. These registers were produced on a cemetery-by-cemetery or memorial-by-memorial basis. They contain an entry for each individual, with details of their rank, regiment, unit and date of death. Many of the entries also include additional information such as next of kin details and, on occasion, some information about how they died. These register images are taken from a master set of registers kept by the CWGC which were used and revised by staff as new information came to light, hence they may contain many amendments. 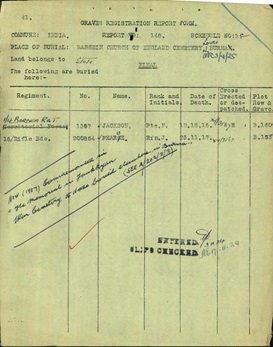 These are collections of grave registration documents for graves and cemeteries that have been lost or abandoned. Sites were abandoned for many reasons, but most commonly because the grave or cemetery could not be maintained due to restricted physical access to a site. As a result, the individuals were alternatively commemorated at a different location, usually on a memorial. 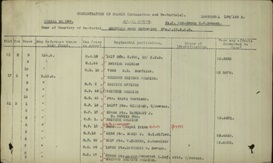 These are lists of individuals who have been recovered or exhumed from their original burial location, and moved or concentrated to a particular cemetery. They provide basic details of the individual, but in addition may also include information as to their original location prior to burial (which in many cases is simply a trench map grid reference), and occasionally some details of how the individual war dead were identified. Exhumations occur when removing remains from a formal place of burial, whereas recoveries occur when remains are discovered but have not been formally buried. 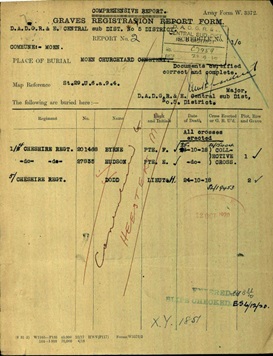 These are collections of grave registration documents which record details of individuals who were originally buried in smaller or isolated cemeteries, but who at a later date were exhumed and reburied (concentrated) in war cemeteries for ease of maintenance. An example of this would be individuals moved from Rosenberg Chateau to Berks Cemetery Extension. 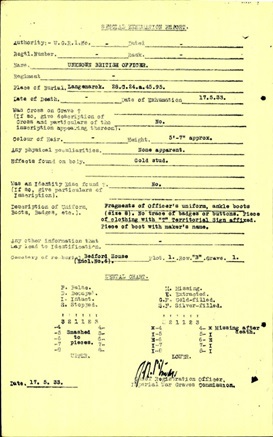 These are documents which were produced when the war dead were exhumed in order to move them into a war cemetery or to confirm their identity. They generally include details of physique, dentistry, clothing, and equipment and can provide some location information about the initial burial. Examples are rare during the First World War and most of the exhumations concerning First World War war dead occurred in the 1930s. Exhumation reports for individuals killed in the Second World War have not been released online since the contents of such documents could prove distressing to the next of kin of those concerned. 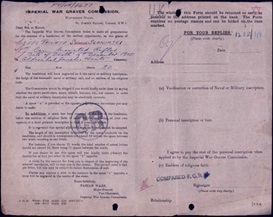 These forms were posted by the CWGC to the next-of-kin listed by the service authorities following the end of the First and Second World Wars. They contain the individual's basic details (name, rank, regiment, number and date of death), plus any further information provided by the next-of-kin, such as their chosen personal inscription, religious emblem, age and details of the next-of-kin. The CWGC used these documents to verify the information within its' own war records and to ensure the correct information was engraved on any headstones or memorials produced. 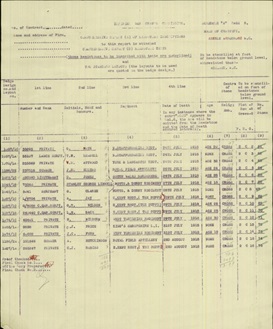 These documents provide details of what was actually inscribed on a headstone. Most headstones for the graves of Commonwealth forces conform to a basic layout of details:

Schedules for the First World War run to two pages in length, with the details of the individual on the first page and the personal inscription, if any, on the second. Headstone schedules for the Second World War differ by being only one page in length, and by omitting any details of the next of kin of the war dead, although choices of personal inscriptions are still recorded. The CWGC used these documents to help manage the enormous programme of headstone production after the First and Second World Wars. 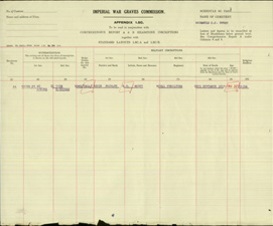 These records contain details of any special layouts that may have been required for CWGC headstones.

These are lists of individuals commemorated on memorials, memorial stones or screen walls. They reflect the details that were inscribed on the individual memorial panels. Documents will normally list individuals under either regiment and rank sub-headings or individual entries which include rank, name, regiment and date of death. 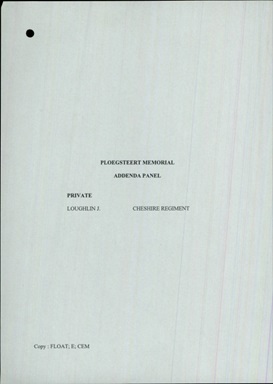 These documents refer to individuals who may have been added to a memorial at a later date, and who were therefore added to memorial addenda panels rather than the main memorial panels.

Many of these documents were created by military authorities and not the CWGC, and therefore most of the alterations, crossings out, and file references added to the documents were made during the course of their work. For this reason, we are not always able to explain their meanings. For most of the CWGC's subsequent history, these records were viewed as working documents, which were added to or corrected as required. Amendments continued to be made to the documents until 2011, when the decision was taken to process any future corrections or changes electronically.

3. Why do different individuals have different types if documents available?

The variety of documents available to download for any given individual depends on a number of factors, including their place of burial, the nature of their commemoration (e.g. on a memorial, or with an individual headstone), whether any alterations had been made to that commemoration, and the survival of the original archive documents themselves. As a rule, individuals who appear on memorials to the missing will have far fewer records related to them simply because they do not have a known grave.

4. The records I downloaded do not include a Final Verification (FV) form. Does this mean no contact was ever made with the next of kin?

During the Second World War, a number of records, including the vast majority of Final Verification forms relating to First World War war dead, were destroyed. However, after the First World War the CWGC made strenuous efforts to contact the next of kin of those who had died in service during the war, and in many cases were successful. Where an original headstone schedule records a personal inscription we can be confident that contact was made with the next of kin at the time. The CWGC has a much more complete record of Final Verification forms relating to Second World War war dead, but these have not been released to comply with Data Protection laws.

5. Are these documents all of the records that the CWGC holds for each individual?

These documents represent the vast majority of the casualty records that are held by the Commission, but not all. Due to the large number of documents held and the logistics involved, documents have been released in a phased approach. The initial release of documents in 2014 related to the First World War, while a second batch of Second World War records was released in 2015. A small number of records which contain more recent correspondence have not been made available in order to comply with Data Protection law. The CWGC also holds other historical records within its archive that relate to the history and founding of the CWGC rather than the individuals we commemorate. These are available to view, by prior appointment, at the CWGC's Head Office in Maidenhead.

6. Why were some war dead moved from their original place of burial?

The CWGC is responsible for ensuring each of the Commonwealth war dead from the two world wars are commemorated. It has, on occasion, been necessary to exhume and rebury individuals, or to provide alternative commemorations for them. Sometimes, this was done immediately after the wars, when isolated graves or smaller, battlefield cemeteries were moved into the sites you see today to guarantee their continued care. More recently, this occurred in the 1960's when the Indonesian government requested the Commission to concentrate burials into a smaller number of large sites.

7. Can I see the originals of these records by visiting the CWGC archive?

These documents represent the earliest records the CWGC holds concerning the individuals it commemorates, and as a result are a vital component of its historical archive. Since copies of these records are now available online it is hoped that many research requests can be answered with reference solely to the digital images. Paper records are available for consultation at our Maidenhead Head Office, by prior appointment.

8. In certain records, a previous place of burial is listed as a series of letters and numbers – what does this mean?

For recoveries of remains made immediately after the war, the Graves Registration Units mainly used the British Army Trench maps to indicate where the bodies had been recovered from. References from these maps are normally in this format - 36.H.11.b.1.2. which is a grid reference related to the grid system used in the maps themselves. For further details about the military maps used and how to interpret them, please contact The National Archives or the Imperial War Museum, who both hold extensive libraries of these maps.

9. Many of these records contain abbreviations and codes – how do I find out what these mean?

We have created a list of terms and abbreviations most commonly used within these documents. Please check our glossary for further information.