Are casualties from the World Wars still found? 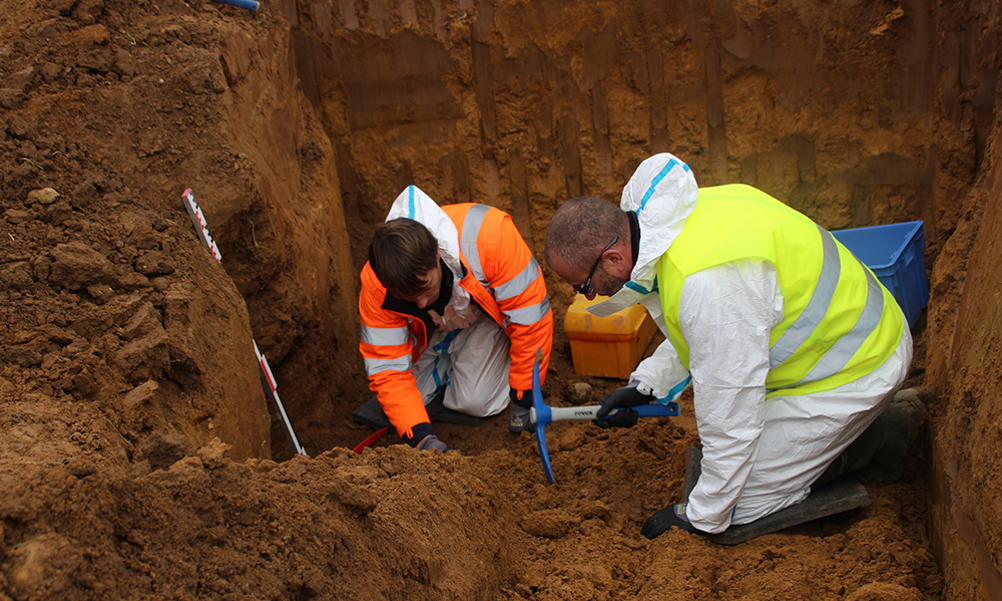 CWGC is informed of around 150 new discoveries of human remains worldwide each year.

Although there was a systematic search of the battlefields after both world wars, the conditions meant that some bodies were not located. Today, the expansion of towns and cities, the associated improvements to infrastructure such as roads and wind turbines, together with the seasonal cycle of agricultural work, results in the discovery of human remains on the former battlefields on a regular basis.

Every country has its own regulations which apply when human remains are found. The police must be informed immediately in case they are those of a more recent victim. It is also possible a much older archaeological site has been disturbed. Once it has been confirmed the remains are those of a Commonwealth war casualty, CWGC will be notified.

We work with archaeologists, law enforcement and military authorities according to the procedures that apply in each country. 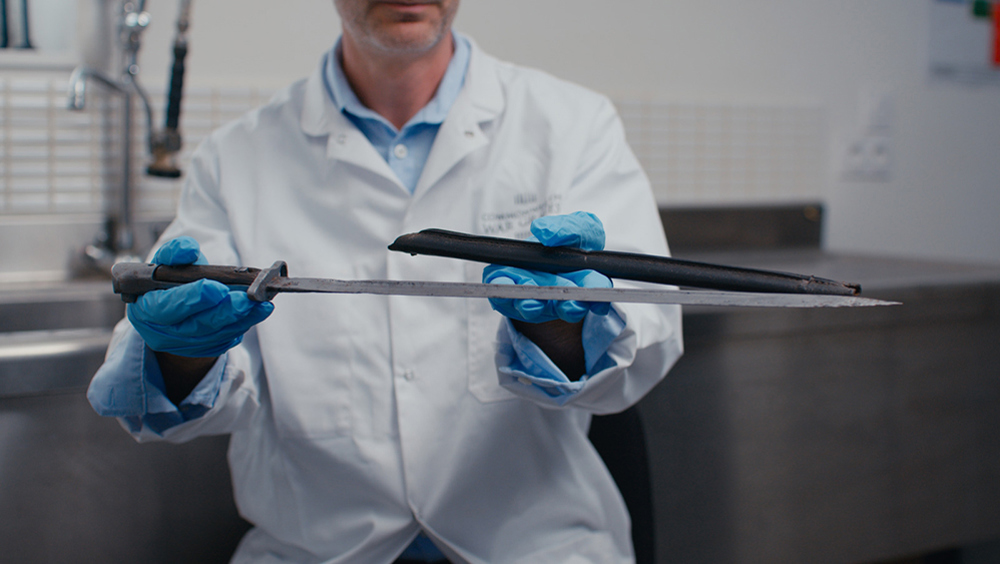 In France, CWGC Recovery Officers have been responsible for exhuming the remains of war casualties since the end of the First World War. We continue to be the only organisation authorised by the French authorities to do this important work.

Today our Recovery Unit, located at Beaurains near Arras, is managed by highly qualified staff who are specialist anthropologists and archaeologists. As well as responding immediately to any reports of remains being discovered, we also take custody of remains recovered by our professional partners in other countries.

LEARN MORE ABOUT how we recover remains

CWGC staff are always ‘on call’ to respond to reports that remains have been found by chance. It’s important that we attend the site as quickly as possible to prevent any damage or disturbance, and to support the homeowner, builder, farmer or construction teams whose work is on hold.

As soon as the police know that the remains are those of a war casualty from the world wars, our first job is to ensure that we can work safely. There is still a huge amount of unexploded ordnance lying on and beneath the surface of the former battlefields. Even after more than a century high explosive and gas shells can be unstable and very dangerous. Hidden dug outs can collapse, and we may have to work in deep trenches in the middle of a building site. 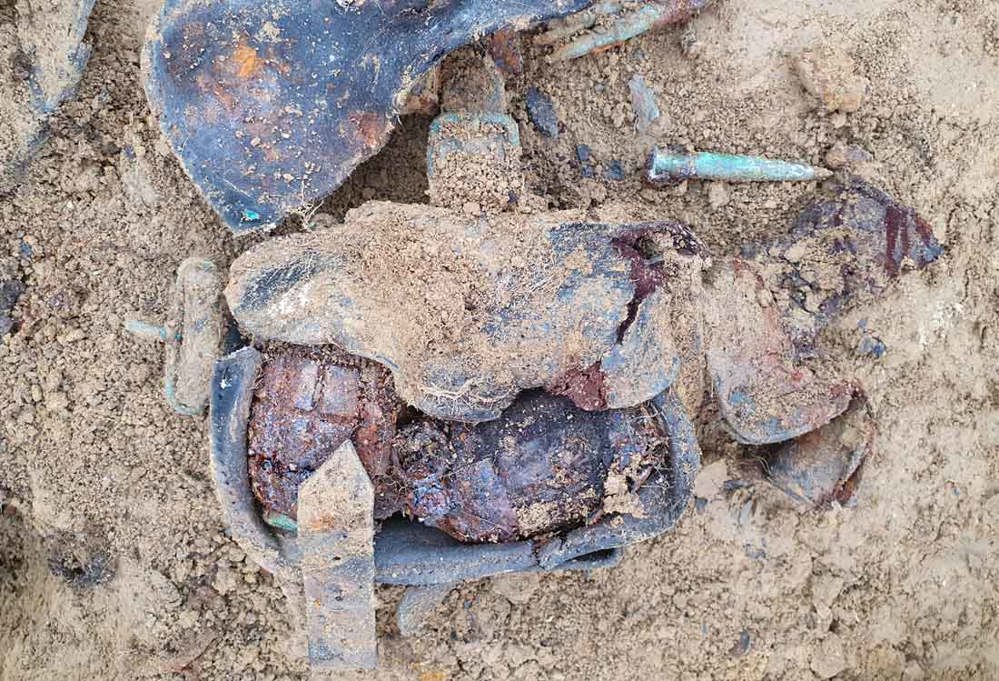 Once the site has been made safe, we can assess the context of the recovery and the state and number of remains. It’s crucial that we work meticulously so that not only are all remains found and recovered with respect, but every individual artefact is recorded precisely where it lies before it is collected and labelled.

Once back at the Recovery Unit, remains are expertly cleaned, and where appropriate reassembled into anatomical order. Depending on the amount and condition of the remains we will assess them to establish the age range and likely height of the casualty. Any artefacts are stabilised, logged and examined for markings.

How do you identify newly discovered remains? 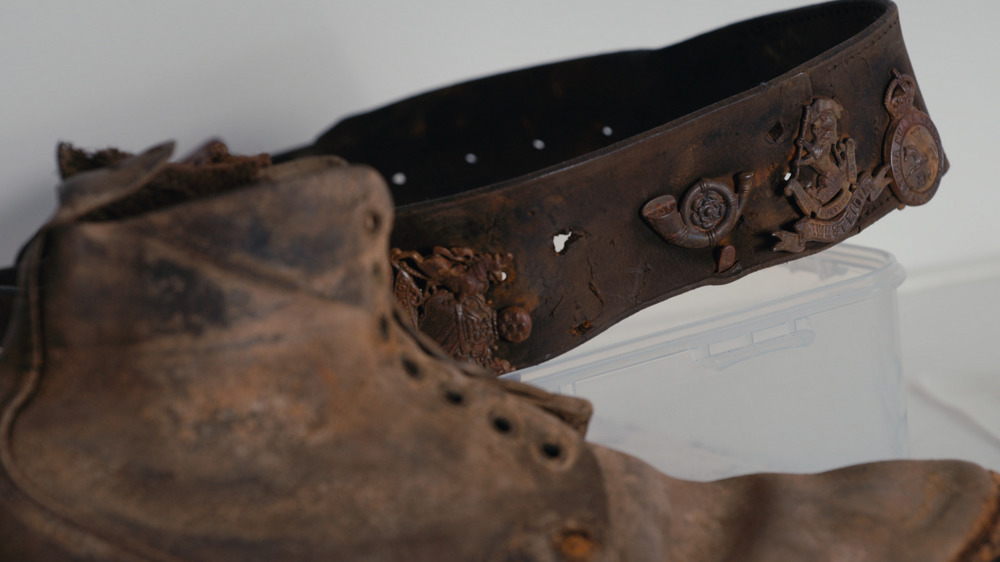 Once we have all the information from the recovery, the Commemorations team will prepare a detailed report. We will analyse information from our archive, combined with details from historic maps and reports to build up a picture of what happened at the recovery location throughout the duration of the war.

Many locations were fought over repeatedly, and the same sites may have seen multiple phases of activity in the intervening decades, so the picture can be fragmented and complex.

Our aim is to build a picture of who the remains might belong to. We look for clues from badges and insignia to tell us their nationality and regiment. Uniform style and items might tell us their rank. The year when equipment was first used can indicate the earliest date when they might have died.

Personal and marked items can be misleading. Service personnel often had souvenir items such as cap badges in their pockets, were using re-issued equipment still marked with the previous owners’ details or were holding items for their friends.

We create a list names from our Memorials to the Missing of all those who died at the right time and place and whose details match our picture.

Unless there is some evidence which confirms which country or force the casualty served with the list may include many thousands of casualties. In this situation, it is not usually possible to make any further progress.

If there are more clues and the list is shorter, it might be possible to reduce it by excluding missing men who were much younger or older than the age range provided by the anthropologist.

Our report is then passed to the appropriate government authority who, will make every effort to investigate in more detail. They may be able to match details such as height with those recorded when a man enlisted. However, this may not be precise if a young man continued to grow. Many records either don’t hold sufficiently accurate details or have not survived.

Where appropriate, they will  trace present day relatives and carry out DNA testing.

CWGC works closely with the military authorities and will publicise appeals for relatives on our website and social media channels to assist any on-going investigations.

The authorities will consider whether the DNA, anthropological and historical data are all consistent before reaching an adjudication.

The level of proof required to formally identify a war casualty remains very high and in the majority of cases it is not possible to name the individual. 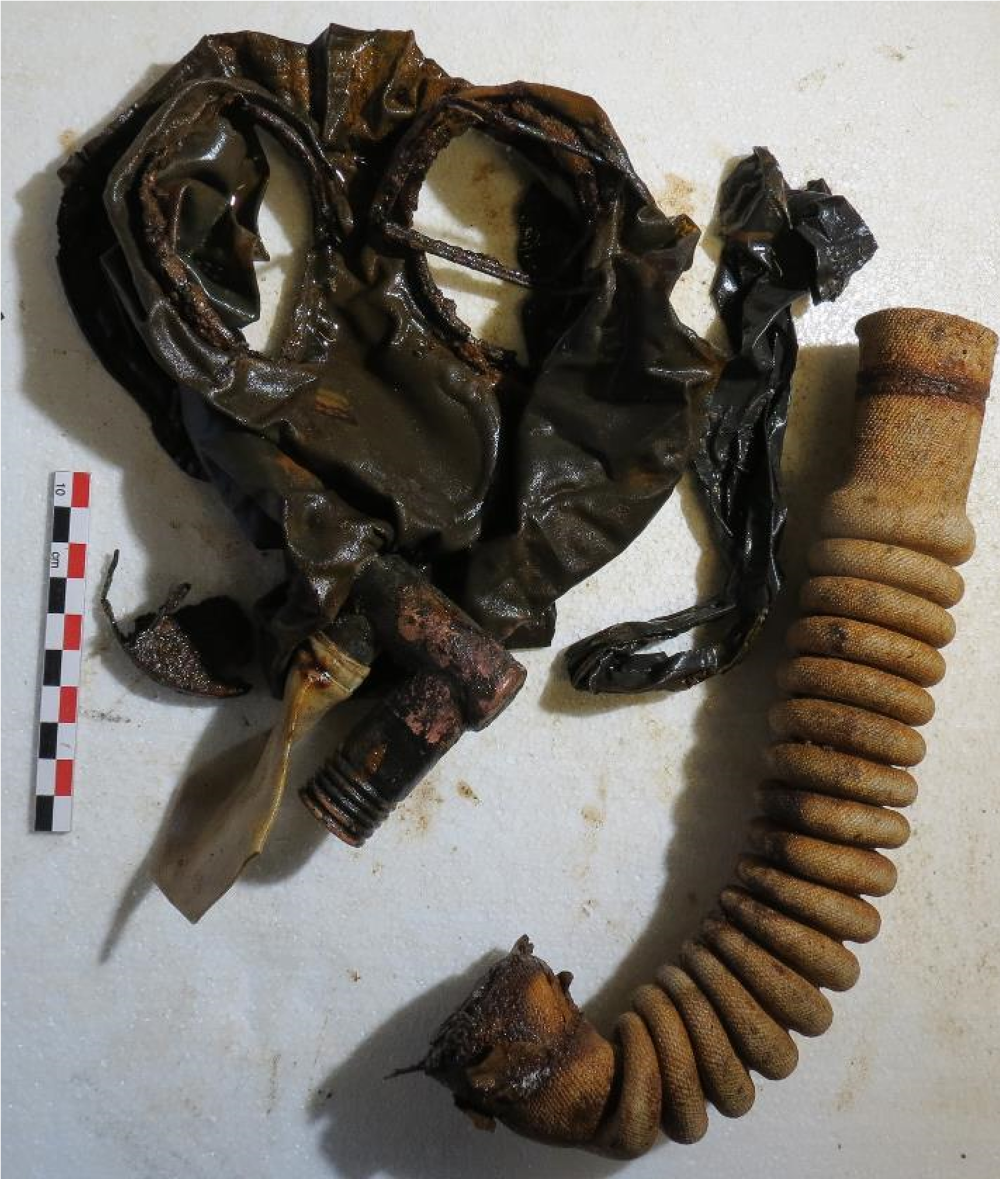 Learn more about the challenges of using DNA

The Commonwealth War Graves Commission (CWGC) and its Member Governments follow the principle that the war dead should, as far as possible, be allowed to rest in peace and not be disturbed. Therefore, the Commission does not permit exhumations from the graves of Commonwealth war casualties for the purposes of identification. This includes opening graves to extract DNA samples.

However, the situation is different in cases where human remains are discovered today for the first time since the end of the war.

Sometimes only small amounts of bone are recovered with no artefacts. In this situation it may not possible to analyse them any further. Where enough suitable remains are recovered to enable an anthropological assessment to be conducted, it may be possible to estimate the age and height of the casualty.

These results are compared with the records of missing servicemen on the CWGC list of potential candidates to help narrow down the number of possible matches. However not all records have survived or contain the necessary details.

New technology including DNA testing can be used, but success depends on a number of factors: 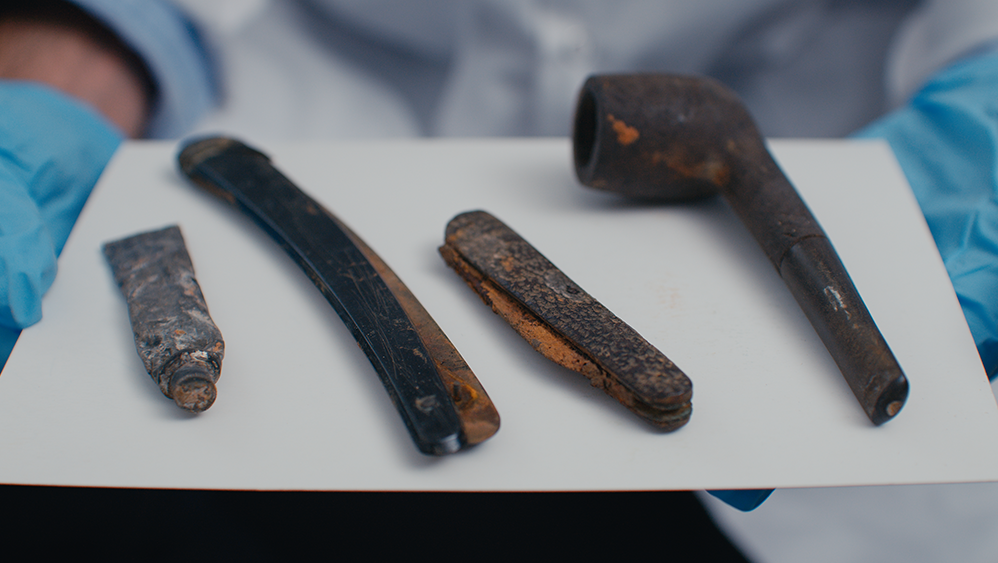 Once the former battlefields had been searched and cleared of military equipment, they were returned to the host nation so that people could return to their homes and land and rebuild their lives

Today most land is in private ownership and accessing it without permission may be an offence.

Various legal protections and local regulations are also in place to ensure the non-disturbance of archaeological sites and military remains. It can be a criminal offence to use a metal detector, disturb aircraft wrecks, or search for human remains.

It can also be dangerous as there are still large quantities of unexploded ordnance present.

Excavations and recoveries must only be carried out by professionally qualified and properly authorised personnel.

If you are given permission to access land and see what you think may be human remains, do not touch the bones or any artefacts as their positions can be crucial to any investigation. Inform the local police immediately, providing an accurate location and description of what you can see.

Removing artefacts is likely to prevent the casualty from being identified and may be theft.

As well as calling the police, if you believe the remains are those of a war casualty you can also call CWGC.

Please consider carefully whether it is essential that you take photographs of the scene. If you feel these would help the investigation, e.g. if the location is extremely remote and it may be some time before the authorities can attend, then we ask that you are respectful and maintain the dignity of the casualty. Please do not share the photographs with anyone except the relevant authorities and CWGC as it can be extremely distressing for anyone else to view such images.

Sharing information about the location may increase the risk that it is disturbed and crucial information is lost, so please do not publicise the find.

We also ask that you do not speculate about the potential identity of the casualty or attempt to contact family members. CWGC support the military authorities to investigate and formally identify Commonwealth war casualties. Initial impressions can be misleading, and it is important that the official next of kin are officially notified by the authorities when it is appropriate to do so.

We do not provide comments about ongoing investigations, as information about the site, the remains, potential candidates for identification and their family members remains confidential and protected by Data Protection legislation, which varies by country.

The outcome of the case and burial arrangements are published on our website. 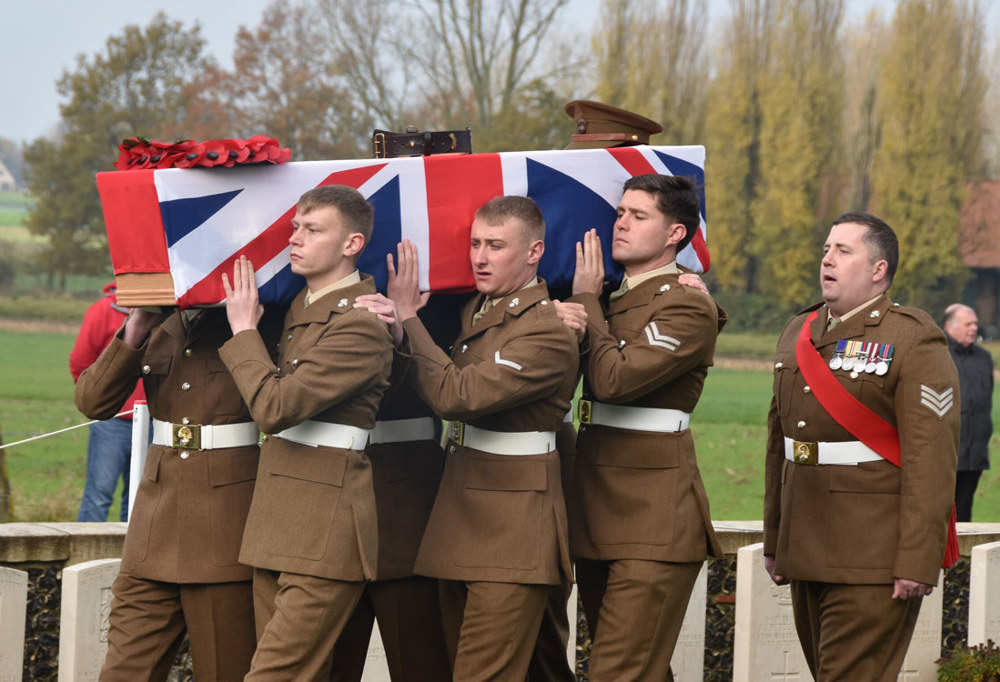 The casualty will be reburied in a CWGC cemetery close to where they were found whether identification is successful or not. The policy of non-repatriation of Commonwealth war casualties still applies and ensures that all those who died together are buried together, irrespective of how wealthy or influential their families were or when they were buried.

CWGC will support the military authorities to arrange for a formal burial ceremony.

The burial protocols established during the Great War are still followed today with casualties who were found together being buried in joint or collective graves, with their headstones touching.

Members of the public are welcome to attend these moving events.

See our calendar of upcoming events