Five things I loved about being a CWGF guide

Here at CWGC, we’re preparing our next batch of CWGF Interns, who will get the chance to work at some of our most famous sites, welcoming visitors from all over the world and sharing the incredible stories of those we commemorate. Today, Abigail Rowlands from the Intern Class of 2019 gives us five highlights from her time on the Somme. 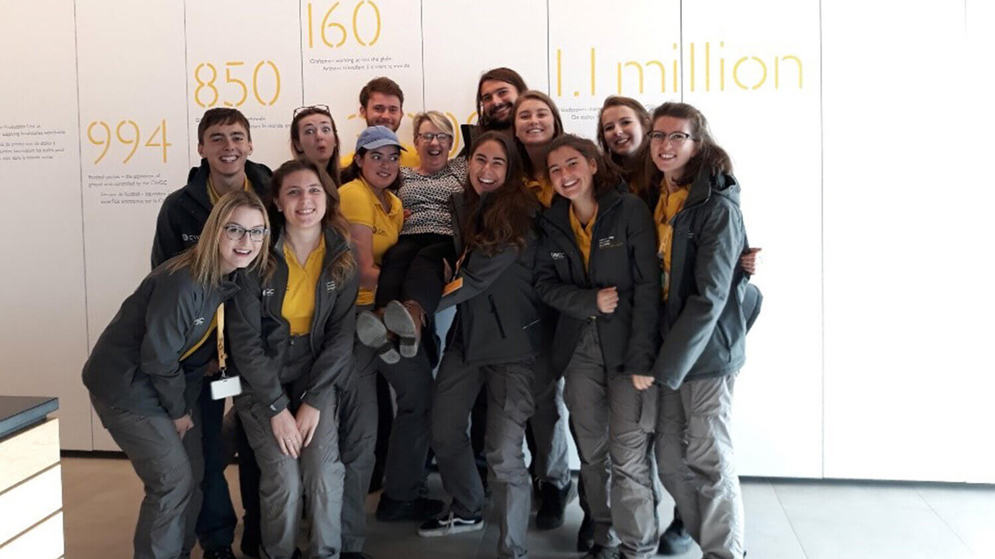 It has now been just over two months since I finished the best experience of my life, and I still think about it every day. Flicking through the hundreds of photos I took makes me wish I was still there breathing in the crisp Somme air, but I am so happy that more likeminded individuals get to enjoy this opportunity. I never thought that so much could happen in such a short period of time – here’s what I learned:

The most incredible part of this role was connecting with the public by telling the stories of the men commemorated on Thiepval Memorial. Everyone comes to the Memorial with varying degrees of knowledge about the site, but very few know stories of those named here.

One of the poignant stories I shared was of Rifleman Jack Melnick. Jack lost his wife in 1915 and moved in with his mother alongside his three-year-old daughter, Eva. It caused the family great pain when Jack enlisted, especially when they began to lose touch with him. I was able to share a photo of the final postcard Jack sent to Eva saying, ‘With fondest love + kisses from Daddy.’

It was such an honour to share stories such as Jack’s with the public, allowing us to remember each man individually and possibly be the first people to pay our respects to them.

Meeting as many people as possible

Many come to Thiepval Memorial to commemorate a relative, giving me the chance to hear their stories.

One lady came to the Memorial to pay her respects, and it was only when I found her relative’s details, that she discovered that he had served under a different name. She told me this was the first and only time she was going to be able to make the pilgrimage to Thiepval and she broke down in my arms. Moments like that were a moving reminder of how CWGC’s work continues to impact us 100 years on.

A similar reaction came from one gentleman whose grandfather had fought around Thiepval Wood, close to where the Memorial is sited. I saw tears build up in his eyes as he showed me the transcriptions of letters his relative had sent home, enabling his grandson all those years later to piece together where he had served.

While living in the city of Arras, I frequently visited the Arras Memorial, which bears a number of names that are important to me: Captain Newel Burton-Fanning, Second Lieutenant Walter Tull, Corporal Joseph Fraser, and Lieutenant Geoffrey Thurlow. It was special for me to come here to pay my respects to these men, but it was still quite sad not knowing where they were.

However, it was not until my final few days in France that I realised my own connection to Faubourg d’Amiens Cemetery, which accompanies the Memorial. This whole time I had been visiting the site not knowing that my great-great-great uncle, Rifleman Ernest Gregg, was buried here.

Before this internship, I knew nothing about my family history, but I wanted to see whether the saying that ‘every family was affected’ was true. I was baffled that I discovered him so close to leaving Arras and that he was buried in the same city that I had been living in for the past few month.

Getting out and exploring

When my amazing boss gave us the chance to visit other sites and cemeteries, I could not have been happier.

One of the most surreal moments came when I was taken to the top of Thiepval Memorial. Never could I have imagined that I would work at the largest CWGC site in the world, let alone climb to the top to see the Battlefields from the best view possible.

Learning from the best

I cannot reflect on my time without praising the passionate CWGC staff - from the Thiepval gardeners to the wonderful ladies in the Beaurains office.

One highlight was volunteering with Steve and Paul in the exhumations and reburials team, working in a First World War mortuary, helping in the identification process.

The knowledge that Steve and Paul have accumulated astounded me, and I went back every time I could. I will forever be grateful for the invitation to an archaeological dig where four soldiers were unearthed, one still wearing his gas mask.

Holding a cap badge, pen, boots and even gold teeth, it was shocking to see the near perfect condition these items were found in - each an indicator as to who each soldier was.

There is no predicting a day in the life of an intern, each is certainly different whether it was because of who I had spoken to or the places I visited. It is an experience that I will never forget.