On 9 April 1917 the British Army launched a major offensive at Arras. During the battle the Royal Flying Corps fought for control of the skies. The losses they suffered were so heavy that the period became known to British aircrews as 'Bloody April'. Today we remember the airmen who lost their lives over Arras, many of whom are commemorated on the Arras Flying Services Memorial. 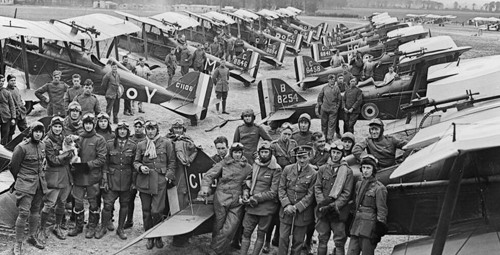 At the outbreak of the First World War in 1914, military aviation was in its infancy. The British had formed the Royal Flying Corps in 1912, and the Royal Naval Air Service in early 1914, with aeroplanes that were unreliable, expensive, and fragile.

In the early battles of the war their role was reconnaissance, but as the trench lines of the Western Front were formed, observation for artillery became crucial. The development of aerial photography meant that enemy lines could be scouted from above, but observation balloons and slow reconnaissance aircraft were vulnerable. Pilots on both sides began to pursue and attack their enemies with pistols, machine guns and bombs. Soon, duelling aircraft became a common site above the Western Front.

In the summer of 1915, the tentative balance that had existed between the opposing sides was broken when the German manufacturer Fokker perfected a French design enabling front-mounted machine guns to fire through an aircraft’s propellers. This technological advantage resulted in what British airmen referred to as the ‘Fokker scourge’. The British countered by concentrating their aircraft in large numbers. By the Somme Offensive in 1916, the RFC had grown to over 42,000 personnel, including ground crew and staff, and wrestled back control of the skies. 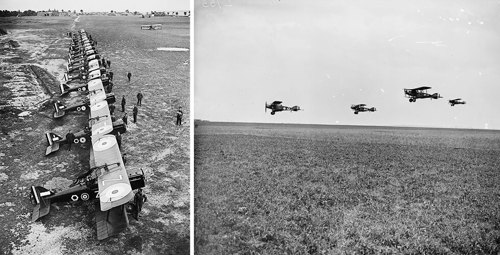 The RFC's success during the Battle of the Somme came at a high price. Over 250 airmen had been killed, and the British were lagging far behind in the development and construction of new aircraft. By early 1917, with another major offensive at Arras about to begin, the RFC still heavily outnumbered the Germans, but with many aircraft that were old and almost obsolete. Many of its pilots were inexperienced replacements for the casualties of 1916. 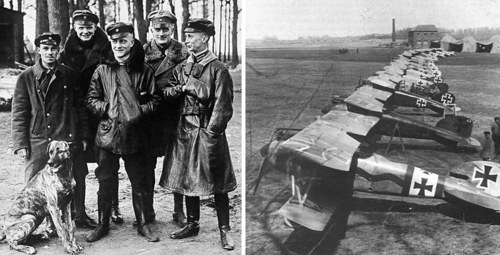 By the end of April, the British had lost 250 aircraft, and some 400 aircrew had become casualties. Nevertheless, they had played a vital role at Arras, flying nearly 20,000 sorties to maintain the crucial reconnaissance.

Eventually, advances in design and industrial production provided new planes for the RFC, including the S.E.5a, Sopwith Camel, and the French-built Spad. In April 1918, the Royal Flying Corps and the Royal Naval Air Service merged to create the Royal Air Force.

By this time, the war in the air was being fought by advanced aeroplanes operating in large formation. The RAF eventually grew to some 4,000 front-line aircraft and over 100,000 personnel. Although the flying services continued to suffer heavy casualties in 1918, 'Bloody April' would remain the most infamous period of the conflict for flyers.

After the First World War, Arras was chosen as the location for a memorial to all those flyers of the Commonwealth who died on the Western Front but whose final resting place is unknown. 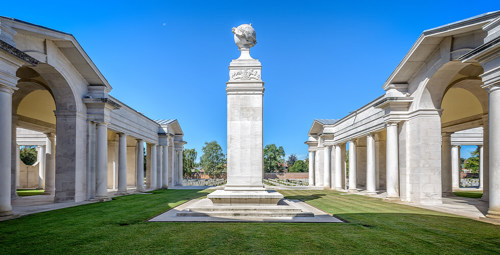 The Flying Services Memorial is adjacent to the Arras Memorial, designed by Architect Sir Edwin Lutyens. It is an obelisk with a globe which forms a finial on the top. The four sides of the obelisk are inscribed with the names of the airmen killed on the Western Front and who have no known grave.

It was unveiled in July 1932 by Lord Hugh Trenchard, Marshal of the Royal Air Force, and a senior commander of British air forces throughout the war. In his speech, Lord Trenchard explained the importance of the positioning of the globe on the memorial.

"The globe placed on the obelisk has a significance bridging the years that have passed since November 1918. It stands exactly, with its North and South points, as our globe hung in space on the morning of Armistice Day 1918. On every anniversary of that morning it will recall the sacrifice that these kinsmen of ours made, winning infinite peace for themselves in the struggle to win peace for their country, and it will catch, however faintly, the warmth of the sun that shone down that day on the trenches of the Arras Front, when at last no longer on the airman's wings." 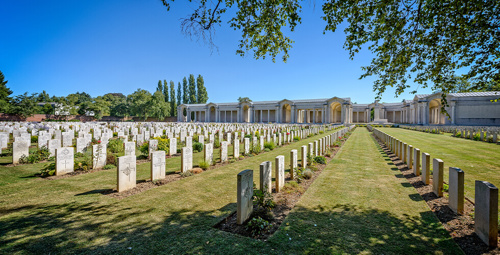 Born in 1887, Mick originally joined the Royal Engineers before transferring to the Royal Flying Corps in 1916. He became famous during the First World War for being an exceptional aviator and flying ace – at his death he had amassed 61 aerial victories, making him the fifth highest scoring pilot of the war. Mick was among the most decorated servicemen in the British Armed Forces. He was honoured with the Military Cross twice, the Distinguished Service Order three times, and posthumously, the Victoria Cross. Mick was killed in action on 26 July 1918 after being shot down by machine-gun fire from German ground forces at Lestrem and has no known grave.

Born in South Africa, John joined the Royal Flying Corps on 1 June 1916. He was involved in several encounters with German fighters while carrying out daylight bombing raids. His MC was awarded for his exceptional leadership and skill while in command of a long-distance bombing raid that destroyed a large ammunition dump under extremely adverse weather conditions. On 27 May 1918, the Germans launched an offensive against the French on the Aisne. In preparation the Germans had moved twelve German fighter units, of 14 machines in each, giving them nearly complete aerial supremacy. John was flying in a Sopwith Camel fighter aircraft, when he was attacked and shot down.

Explore the CWGC cemeteries and memorials in France where those Commonwealth flying services personnel who died during April 1917 are commemorated.

Remembering the pilots of the Battle of Britain

Discover the stories of 'the few' who fought and died in the Battle of Britain and discover the CWGC sites where they are commemorated.

Read Remembering the Pilots of the Battle of Britain
Our latest blogs
Blog
Remembering the revolutionary Battle of Cambrai 105 years on
Blog
In the Line of Duty: Remembering the Great War's fallen Generals
Blog
Taking the field: Footballers who died in the World Wars
Read more blogs
Share this on
Tags Bloody April Arras Memorial Remembrance