Imagine having to choose the personal inscription to be engraved on the headstone of a loved one lost during one of the two world wars. For some, this isn’t just a distant thought but a reality when a previously unknown or recently discovered casualty is identified. Commemorations Officer, Catherine Nell, explains how her team support descendants in making that choice for their loved one’s war grave. 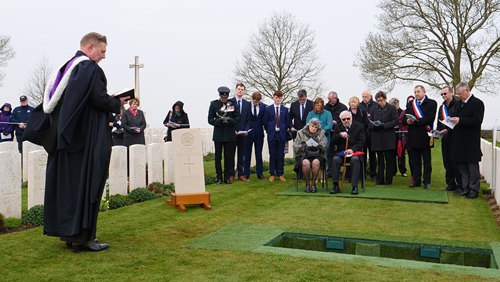 After both world wars, wherever possible, the CWGC made contact with the next of kin of those casualties who had been buried in an identified grave, asking them to make a choice regarding a religious emblem and personal inscription for their loved one’s headstone.

As a Commemorations Officer, one of my most moving roles is to support the current descendants of recently identified casualties in making those same decisions on behalf of their ancestors.

Sometimes they are familiar with their ancestor’s story – with anecdotes and photographs passed down the generations. Other times, until they are traced as part of the investigation, they may not have been aware of their relative’s existence.

Regardless of what they do or don’t know about their ancestor’s service and sacrifice, it is my job to help them reflect the wishes of those members of their family who knew the casualty personally. We provide plenty of examples and research to help them consider what those who loved and lost their precious husband, father, son or brother may have chosen at the time, had they been given the chance. To ensure equality of treatment, we ask that descendants use words that the casualties and their immediate family would have used, rather than the names of those born recently or phrases or lyrics from poems or songs written long after their ancestors’ death.

A recent example of this was with Private Henry Albert Victor Wallington who was killed on 3 December 1917. With no known grave, he was commemorated on the Cambrai Memorial. A century later a body was discovered on the former battlefield and was identified as Henry. He was reburied at CWGC’s Hermies Hill British Cemetery in June 2019.

When I first spoke with his descendant, she was unsure which religious emblem and personal inscription to choose. She acknowledged that Henry would have identified as a Christian, and therefore a cross was fitting, but as an atheist she felt conflicted about choosing biblical text. She told me that she’d heard a Thomas Hardy poem read at a humanist funeral, and asked if she could run some lines based upon the poem by me:

‘I AM THE FAMILY FACE;

FLESH PERISHES, I LIVE ON,

THROUGH TIME TO TIME ANON’

For me, this inscription encapsulates the complexity and challenge for those making choices on behalf of those who they never knew. A fitting and poignant inscription makes you feel as though the innermost thoughts of those who lived, loved and lost a century ago have been articulated in words they would have been familiar with. Wherever possible, and fitting, we ensure that a family’s wishes are represented on a headstone. 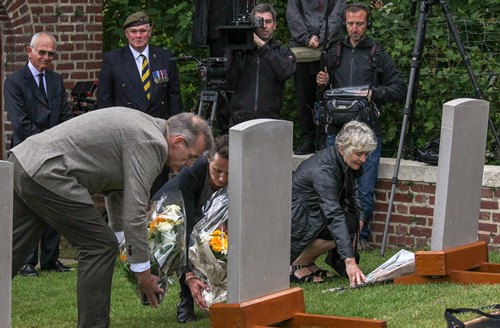 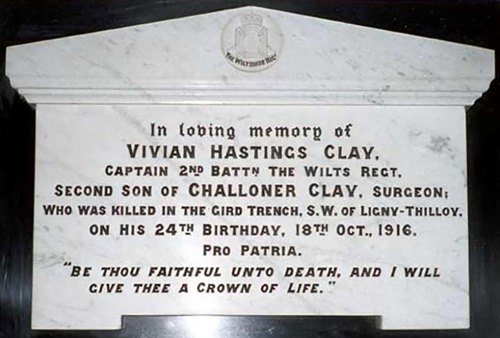 Sometimes families can be confident that they are reflecting their ancestor’s wishes. This was case with Captain Vivian Hastings Clay who was killed on 18 October 1916 and was commemorated on Thiepval Memorial until his grave at Warlencourt British Cemetery was identified. His descendants chose text from a private war memorial Captain Clay’s parents had erected in their local church, St. George’s in Fovant:

‘BE THOU FAITHFUL UNTO DEATH,

AND I WILL GIVE THEE

A CROWN OF LIFE’

It feels very appropriate that the lines they saw when they worshipped at home will now also mark their son’s final resting place. 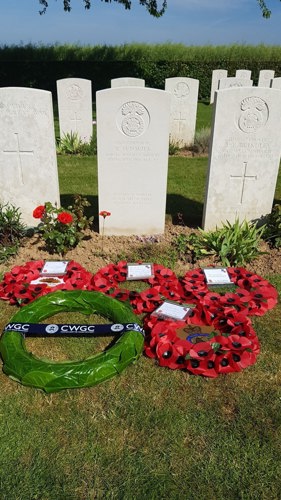 Corporal Robert Owen Davies was killed 20 July 1916 and was also commemorated on the Thiepval Memorial. His grave has now been identified at London Cemetery and Extension. His descendant kept their family’s heritage at the forefront of her mind when choosing the personal inscription.

She knew that Robert was Welsh speaking and recognised the importance of language to his identity. She asked me if the sentiment ‘deeply loved, sadly mourned, proudly remembered’ could be expressed in his native language. One of the fantastic things about working for CWGC is the variety of skills among my colleagues. A member of our Horticultural team translated the text into Welsh and Robert’s headstone is now engraved with:

It is a privilege and pleasure to support descendants to select a sentiment that will be engraved on their ancestor’s headstone forevermore. I consider this act a mark of respect for those who laid down their lives, and a vivid reminder of those they left behind.