The Last Casualties of the First World War

The 31st August 1921 marks the date when the First World War officially ended. It is also the date that the last casualties who died during or as a result of the conflict are commemorated by the Imperial War Graves Commission (IWGC). Ian Coyne, a tour guide with Anglia Tours, Product Development Manager at Next Generation Travel Group and a CWGF Eyes On Hands On Volunteer, uncovers the stories of some of these casualties. 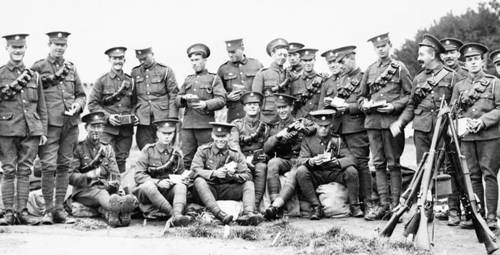 Notwithstanding the Armistice of 11 November 1918, today marks the centenary of the date on which the First World War actually ended. When the Termination of the Present War (Definition) Act 1918 was passed by Parliament, it gave discretion to His Majesty in Council to declare the date of the termination of the war. Consequently, war with each of the Central Powers ended close to the date of the ratification of the various peace treaties. Although a treaty with Turkey had yet to be ratified, it was decided that 31 August 1921 ‘should be treated as the date of the termination of the present War’. As the Imperial War Graves Commission (IWGC) was charged with responsibility for the graves of service personnel who died between the outbreak and end of the War, this meant that those casualties of the First World War who died after 31 August 1921 fell outside the remit of the Commission.

As this centenary approached, Gareth Davies a member of the Anglia Guide Team came up with the idea of visiting the cemetery in which each of the servicemen who died, in the UK, on 31 August 1921 is buried. Aided by the efforts of Emrys Jones, one of Anglia Tours’ original guides, and with the support of an enthusiastic group of friends and colleagues, we not only managed to visit each cemetery, and take a photograph of each headstone or WW1 memorial, we also managed to unearth information which has subsequently enabled the CWGC to update their war records a hundred years on.

The son of Ellis Hugh & Margaret Jones, 12 Flora St, Ashton in Makerfield, Private Jones saw service in the Machine Gun Corps and 5th King’s Own Yorkshire Light Infantry, before joining the Loyals. In November 1919 he was discharged from the Army suffering from pulmonary TB.

Although Private Jones’ headstone records his date of death as 31 August 1921 his pension records and the Graves Registration Report showed he actually died twelve months earlier, on 31 August 1920.

The good news is that having been made aware of this CWGC were able to update the database and arrange for a new headstone with the correct date. 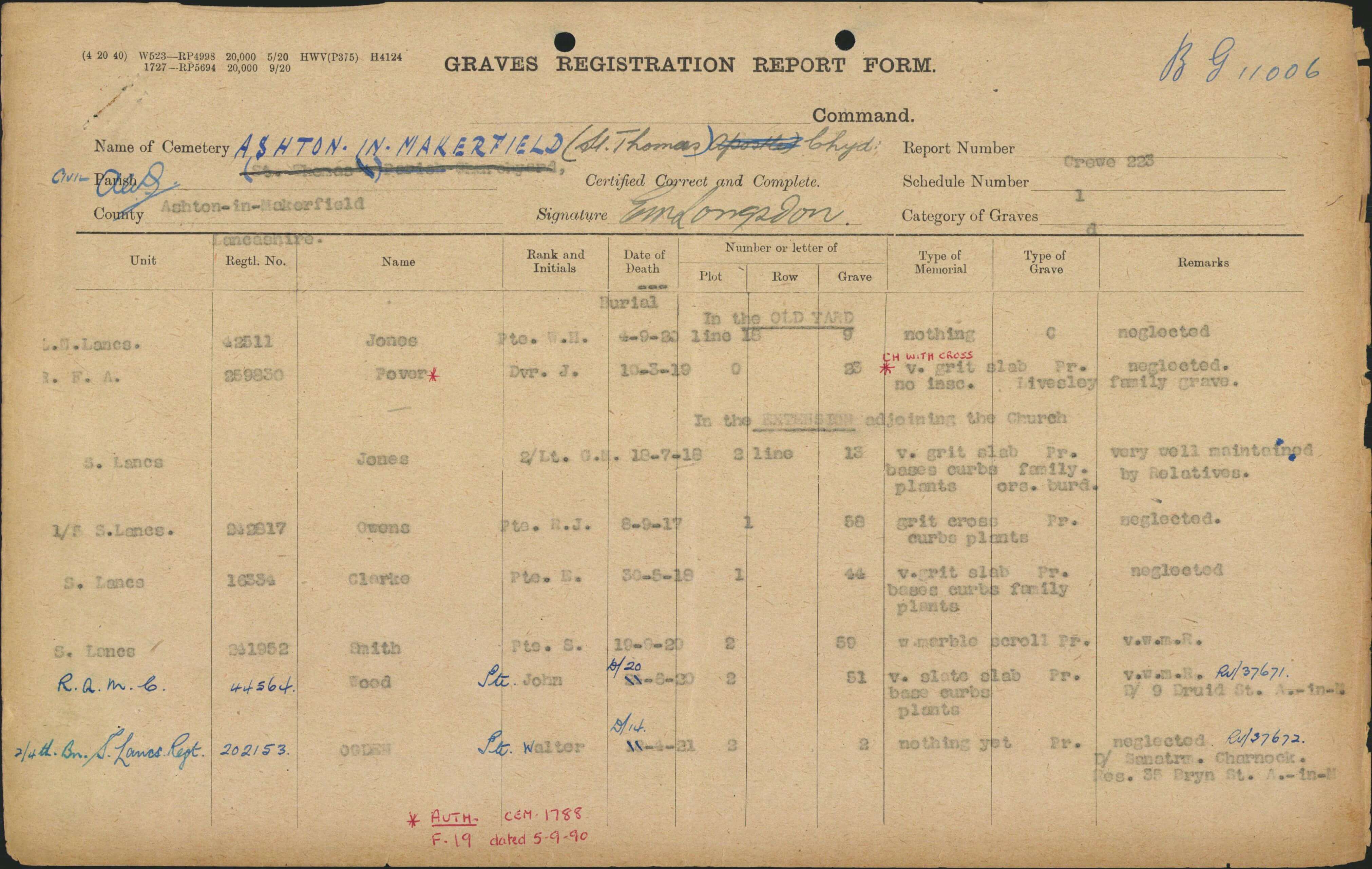 Then there is Private 2nd Class, Thomas Shepherd of the Royal Air Force. Pte Shepherd is one of sixty Great War casualties commemorated on a screen wall in Bacup (Fairwell) and who do not have individual headstones.

Interestingly during his enquiries, the cemetery authorities informed Emrys that Shepherd is in fact buried in a different plot to that identified on the Screen Wall.

A manual amendment to the Graves Registration Report, indicates he may have been buried in a private grave together with James Henry Turner and Mary Ann Shepherd. However, when Emrys visited the cemetery he found there was neither a gravestone nor grave marker in place.

Although most of the men who died on 31 August 1921 succumbed to illnesses or injuries suffered during the First World War, that was not the case with Gunner Michael Tierney. Gunner Tierney was killed in an accident at Bordon Camp, the circumstances of which are set out in this article from the Sunday Post, dated 4 September 1921:

The Hampshire Coroner returned a verdict of accidental death at an inquest held at Bordon Camp to-day on Michael Tierner (sic), a gunner in the R.G.A. The evidence showed that deceased took part in an alarm race, which was a feature in the annual sports of the 9th Brigade, R.G.A. He was running alongside a six-inch thick howitzer when he noticed something amiss. He attempted to right matters but was caught by the heavy wheel of the gun and thrown to the ground with such violence that his neck was dislocated, and he died almost immediately.

The opinion of Colonel M'Cleary was that deceased exhibited excessive zeal in the competition and the Coroner agreed.

Gunner Tierney’s wife Mary was amongst the crowd that witnessed the fatal accident. His headstone in Bordon Military Cemetery bears the personal inscription ‘Sadly missed by fond wife and loving children RIP’

These are just three of the servicemen who died on the last day of the First World War - our aim at the start of this project was to remember each of those who died, in the UK, on 31 August 1921 and who are buried in the UK.

Starting from 08.00 on 31 August 2021, we will post a profile of one of these men on the Anglia Tours’ Facebook page and Twitter feed, on the hour each hour. You will also be able to read their profiles on the Anglia Tours website.

We Will Remember Them.

HOW OUR WAR RECORDS WERE COMPILED

Find out about our records, the changes we make and what to do if you spot an error.