The CWGC has hosted two events in Kuala Lumpur to mark the 75th anniversary of the Fall of Malaya. 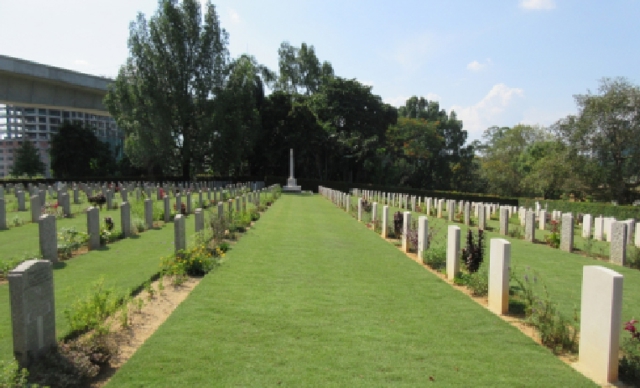 Senior representatives of the Commission’s member governments attended the events on Tuesday 2 May, as well as the Nepalese Ambassador to Malaysia.

In the morning, ambassadors, senior members of the Malaysian Armed Forces, veterans groups, local dignitaries and schoolchildren joined in a commemorative service at the CWGC’s Cheras Road War Cemetery, to remember those who lost their lives in the Malaya Campaign of the Second World War.

The High Commissioners of Britain, Canada, Australia and New Zealand each played a role in the service, as well as a surviving veteran of the Malaya Campaign.

James Jeremiah, 93, served with the Malaya volunteer force, E Company, on the island fortress of Penang, from 1940-41. At the service, he gave a reading, recounting some of his experiences during the Malaya Campaign and the Japanese occupation of Penang.

The Garden International School Choir - led by Helen Long, with music by her husband John Long performed the Malaysian and British National Anthems, and students later laid flowers on the graves.

Principal Mark Ford said: “It is an honour and a privilege to have the opportunity to recognise and remember the many sacrifices made by so many people 75 years ago. The Garden International School community pays tribute to all those who gave up their lives to make ours better.”

In the afternoon, a ceremony took place to officially re-open the Seremban Ghurkha Cemetery, a non-world war site managed by the CWGC. The site, south of the capital in Negeri Sembilan, has undergone a complete renovation, involving the removal and re-levelling of all headstones, laying a new turf and creating a new staircase and pathway to the cemetery.

Vicki Treadell, British High Commissioner to Malaysia, planted a tree at the Seremban Ghurkha Cemetery, describing it as “an act that serves as a living lesson in hope and renewal”.

The Nepalese Ambassador to Malaysia, His Excellency Dr. Niranjan Man Singh Basnyat, said it was a privilege to witness the re-opening of the Seremban Ghurkha Cemetery. He read Lawrence Binyon’s ‘To The Fallen’ as a prelude to the two minutes silence.

He added: “This Ghurkha Cemetery is the final resting place of 169 non-world war fallen Gurkhas who fought for the Commonwealth. It includes servicemen of the Brigade of Ghurkhas that served at Sikamat Camp in Seremban during the Malayan Emergency of 1948-1960 and many of their dependents also are laid here to rest. I would like to thank the Commonwealth War Graves Commission for keeping this history alive, so that the fallen are remembered in perpetuity.”

The importance of remembrance was highlighted by younger generations, who spoke during the service at Seremban Ghurkha Cemetery.

Dhevina Premshanger, a 10-year-old student of Asia Pacific International School, said: “To me, remembrance means an act of keeping in memory those who fought for us, those that we lost in the war, and who gave up something valuable for the sake of us. These soldiers sacrificed their lives for the country and its people.

“Having them in our memory and in our heart makes us proud. They stood strong and they teach us that often strength comes from the inside. These soldiers fought bravely and for their sacrifice we will forever be grateful.”

He said: “Because they fought, we do not need to fight in Malaysia now. We have peace here. We can go to school happily, and live our own hopes and dreams.

“There is still war going on around the world right now. We must remember the tragedy of war and continue to honour those who made the greatest sacrifice by giving their lives and stories, so that we can go on to lead ours.”