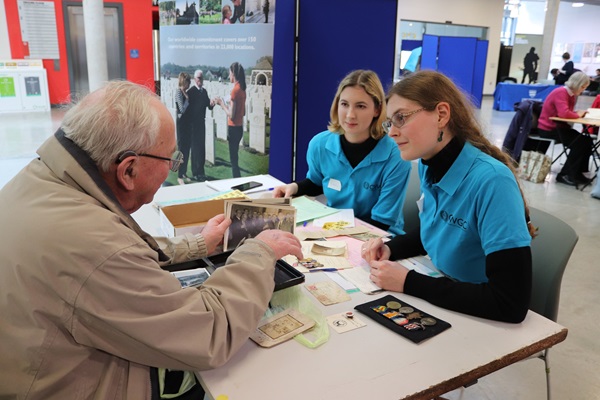 Hand-carved mementos from prisoners of war and reminders of one of Britain’s infamous defeats in the First World War were all revealed at the final Lest We Forget roadshow.

Plymouth residents came out in force to share the memories of how their forebears had fought and died in the conflict, bringing tales and family heirlooms to be recorded for the next generation.

The final of four national roadshows was hosted at the University of Plymouth on Wednesday 6 March and gave people the chance to have their stories added to the growing Lest We Forget digital archive, a joint project between the Commonwealth War Graves Foundation and the University of Oxford.

Among the items brought in were a hand-carved wooden photo frame that had been made for a British soldier by a German prisoner of war he had been guarding. Other visitors had chess sets made by relatives to keep themselves entertained in the trenches alongside letters, photographs and medals.

John Hockaday from Noss Mayo brought along his father’s badge, received in honour of his presence during the Siege of Kut. In 1916 the British-Indian garrison at Kut-al-Amara, in modern-day Iraq, surrendered following a brutal siege from the Ottoman Empire.

Of his dad, John said: “My father was there in the Siege of Kut but because it was considered a failure it never gets talked about much. But they really went through a lot so we need to remember what happened. I don't think their story has been told enough and, it being about my father, it's also a personal story to me.”

Alongside the badge, John was able to tell the Lest We Forget volunteers about his own experiences as a young child playing war songs on piano for his father and his surviving comrades, itself a personal reminder of the life after the war for that generation.

Celia Bean from Plymouth said: “I brought along letters from my grandfather's brother. He stayed on after the war and ended up on the airships project where he was later killed. These letters he left behind are a link to the past. They're also a part of me and who I am. You get a feeling for who someone is when you have something like this and I wanted to share that.”

Max Dutton, assistant historian for CWGC, said: “It’s been fascinating hearing the public’s stories and memories and being able to take a permanent record of them to share with the next generation.

“The people of Plymouth brought along a wonderful variety of photos, medals, letters and some unique artefacts that help build on our understanding of what it was like for those whose lives were touched by the First World War.

“The most rewarding part of the Lest We Forget project has been to see the enthusiasm the public has for keeping these stories alive and making sure that collectively we continue to remember the wartime generations.”