Our research into non-commemoration did not end with the publication of the Special Committee’s report in April 2021. Those who have read the report will know that the documents that informed its findings were largely drawn from the CWGC’s own archival collections – this was as much a result of the importance of that material as it was the time we had, and the restrictions imposed by the pandemic. Consequently, the report highlighted several avenues that might need to be explored in the future. Over the last year, this is exactly what the CWGC’s Historians have been doing, focusing their own attentions on UK collections while remotely leading overseas teams to access archives across the world.

The three largest issues uncovered by our earlier research were the limited understanding of casualty numbers, the whereabouts of missing burials and, of course, the existence of missing names from our sites and war records. Some of the team’s more exciting highlights from this year’s findings are outlined here.

Those who have read the Special Committee report will remember the large, bracketed figures for those affected by the issues it identified. When it came to the number of Egyptian Labour Corps (ELC) and Camel Transport Corps (CTC) men not commemorated by name, at the time of writing we were unable to provide a more accurate figure than between 10,000 and 50,000. For the most part, this was the result of conflicting reports received by the IWGC in the 1920s and the fact that it did not have the information it needed to commemorate the dead as it normally would. Without this, the IWGC ultimately settled on the figure of at least 10,000.

At the core of our ongoing research is the attempt to recover all the names we know to be missing from our records. If, however, we find we are unable to do so, we are determined to at least quantify the true loss to these communities. When it comes to the ELC and CTC, this is exactly what we are now one step closer to doing thanks to returns produced during the war by the Deputy Adjutant General, Egyptian Expeditionary Force. The team discovered these documents at The National Archives at Kew, and they tell us that 10,046 ELC and 5,041 CTC men lost their lives on service in the Middle East up to September 1919.

ELC and CTC casualty tables, The National Archives of the UK, WO 95/4378

While it is still hoped that we might be able to recover the names of these men in the future, we are at the very least now close to understanding the cost of the war to these units.

There were myriad reasons why the Imperial War Graves Commission did not commemorate some African and Indian casualties at the grave following the First World War, but, in the majority of cases, we believe it was because the exact whereabouts of those burials were unknown. And ‘exact’ is the operative word when it comes to burials. Rather than a binary arrangement of known and missing graves, there was also a grey area in between – particularly in theatres like East Africa where burials were dispersed across an enormous landscape. Although the physical record of cemeteries and monuments to the missing suggest a simple delineation, contemporary documents show in some cases there was not enough information to identify and find graves, even when they were known to exist.

Over the last hundred years, we have lost a lot of ‘spatial’ information – which is to say maps and plans – about those grey areas, with the archival record often giving us little more than place names. Another exciting find by the research team, again at The National Archives of the UK, came in form of a map of burial locations in East Africa (a snippet shown here). Originally produced by the IWGC to accompany a table of cemeteries and gravesites, at some point in its history it was separated and lost or discarded. However, a copy of the map survived with the Colonial Office, which ultimately transferred it for permanent preservation at Kew. 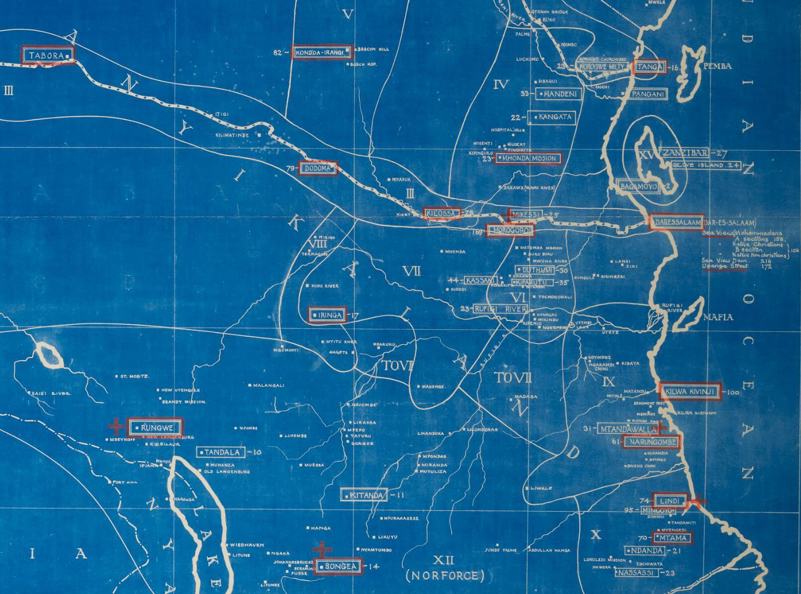 If nothing else, the map provides us with a better understanding of the challenges faced in that theatre of war and illustrates the scale of the task that faced the IWGC. It is too early to say just yet, but it is hoped it might also help us to trace missing burials.

We have known from the outset that the Commission is missing the names of some men who died on service during the First World War, and we know that most of these men were raised across East Africa and in Egypt. The Special Committee’s report attempted to identify which units were missing from the records in an effort to direct future research. When it came to East Africa, by far the largest gap was, and is still, believed to affect labourers in the form of carriers or porters. Part of the issue with the historical record appears to be how these men were recruited and employed, which in some examples appears to have left little in the way of paper trails. Where we held out hope, however, was for the survival of any Military Labour Bureau (MLB) records. 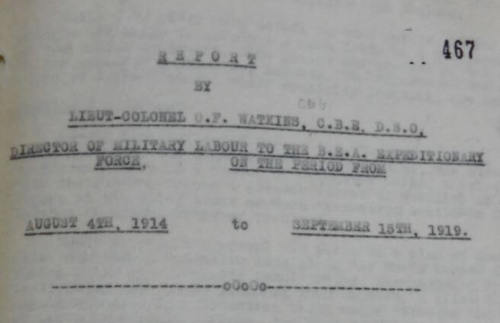 Although little paperwork appears to survive in the United Kingdom, a 1919 report completed by that organisation’s commanding officer, Lieutenant Colonel Oscar Watkins, provided a detailed account of how porters in the Bureau’s service were managed. Of particular interest is how casualties and deaths were dealt with. On top of a variety of other functions, the MLB maintained a ‘Statistical Section’ that was responsible for a variety of tasks, including the production of death lists. As the report stated, “These lists gave all possible information about a man, and were sent to the Paymaster to fill in the amount due to him. The completed list was printed and sent to the District Commissioners who were authorised to pay credit to the next-of-kin on application.” In short, the largest employer of military labour in East Africa during the First World War produced detailed lists of men who died in its service. This runs contrary to what the IWGC was told by the Colonial Office in the late 1920s – that no such information existed in the UK or Africa – and so the research team remained hopeful that something might survive in Kenya or Tanzania.

Working remotely with a small team in Nairobi, this is exactly what we found. Although a limited snapshot, this series of documents shows exactly how the MLB death notification system worked. In June 1916, a covering letter to the Provincial Commissioner at Mombasa from the MLB Statistical Officer states that he has forwarded 10 copies of a particular death list for distribution to the District Commissioners. What follows is an example of one of these documents, headed here EATC (East African Transport Corps), Carrier Section (a forerunner to the MLB). 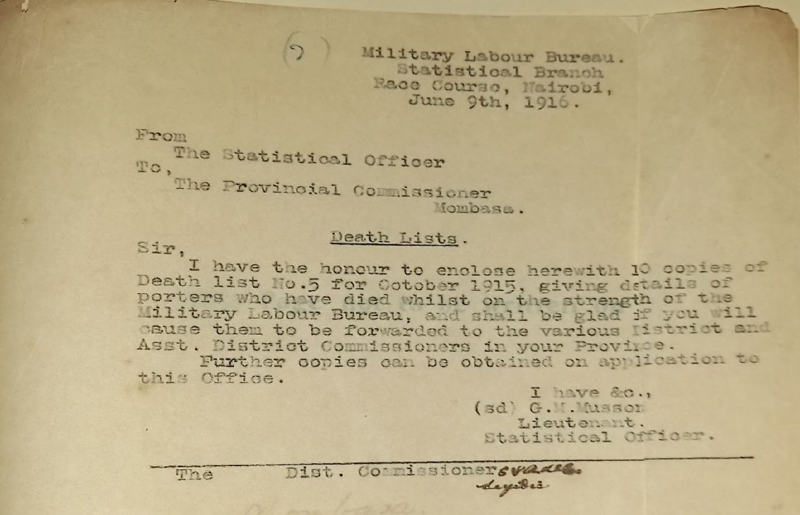 This extremely exciting find tells us a great deal about these men and how they tragically lost their lives in these operations: where they came from, the name of their fathers, when they joined, and how, when and where they died. Critically, not one of them is currently commemorated by name. This is exactly the kind of document that multiple other sources – historical and modern – have suggested did not exist. Although very far from a complete collection, it offers hope that more MLB death lists might survive elsewhere, something the CWGC’s Historians and their overseas teams are continuing to look for. 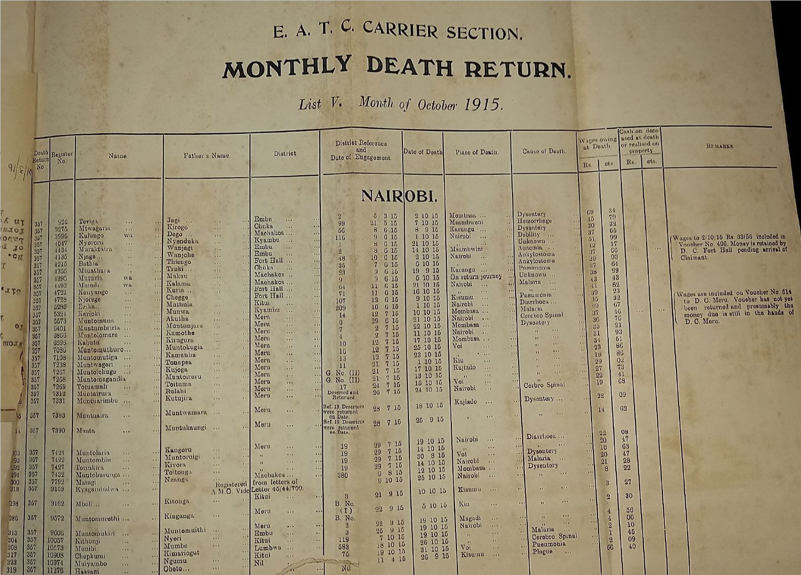 Despite the challenges of the ongoing pandemic and difficulties faced accessing some archives, the research team remains dedicated to understanding and sharing this difficult history and naming those who have not received the recognition they deserve. We know we may never recover all of their names, but every one we do find is a wrong righted and a man remembered.