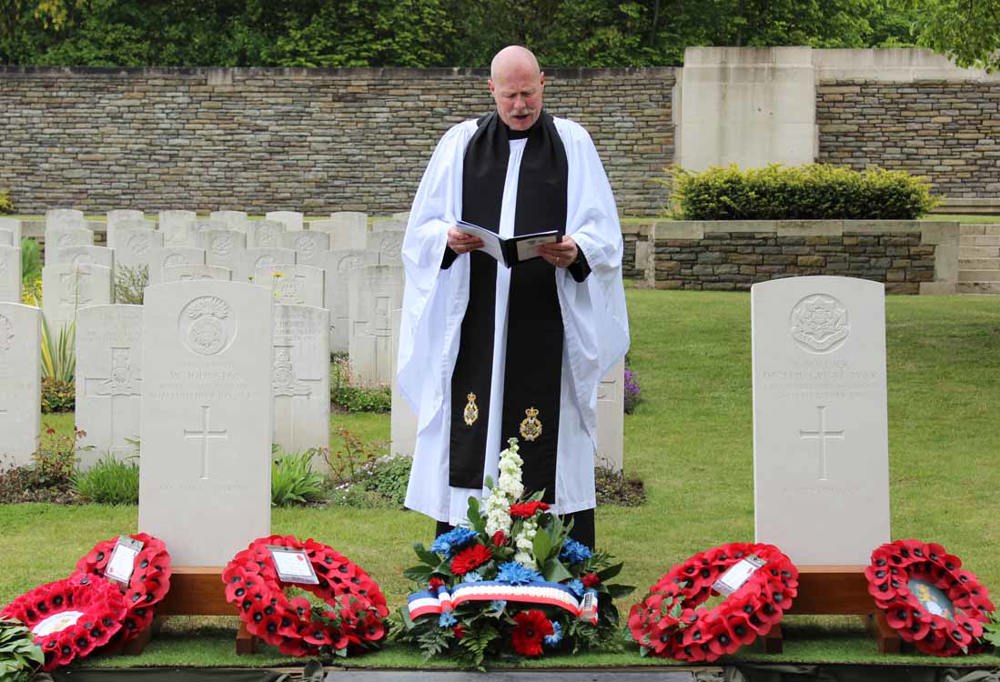 Two British soldiers killed on 26th September 1915 during the Battle of Loos were laid to rest with full military honours on Thursday 5 May a century after their deaths. The service was organised by the MOD’s Joint Casualty and Compassionate Centre (MOD JCCC), also known as the “MOD War Detectives”, and was held at the Commonwealth War Graves Commission’s (CWGC) Loos British Cemetery, Loos-en-Gohelle in northern France. 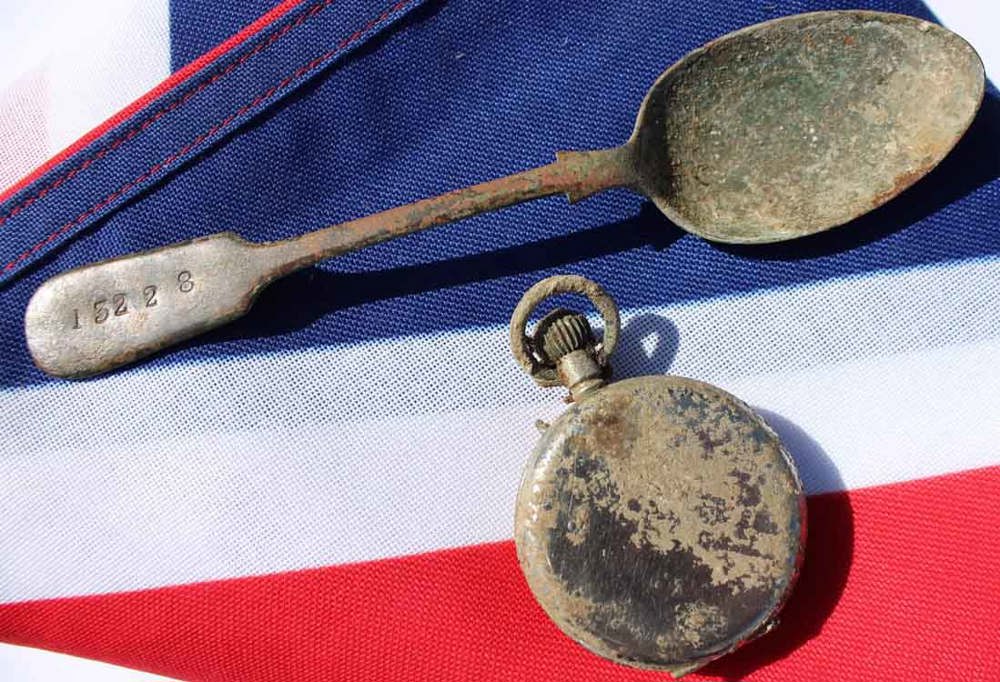 Artefacts found that led to the identification of Pte Johnston (Crown Copyright/A.Eden).

One set of remains was recovered in January 2018 during a World War One ordnance search near Lens. Also found was a spoon with the number 13228 stamped on the back. MOD JCCC and the CWGC confirmed it to be the regimental number of Private (Pte) William Johnston (aged 39) of 7th battalion, Royal Scots Fusiliers, having cross-referenced it with war records that also confirmed he was the only casualty with this number who did not have a known burial place.

The MOD JCCC traced a great-great-niece who provided a DNA sample to compare with DNA taken from the remains. The results were conclusive. Pte Johnston’s service records no longer exist, so not much personal information is known about him. 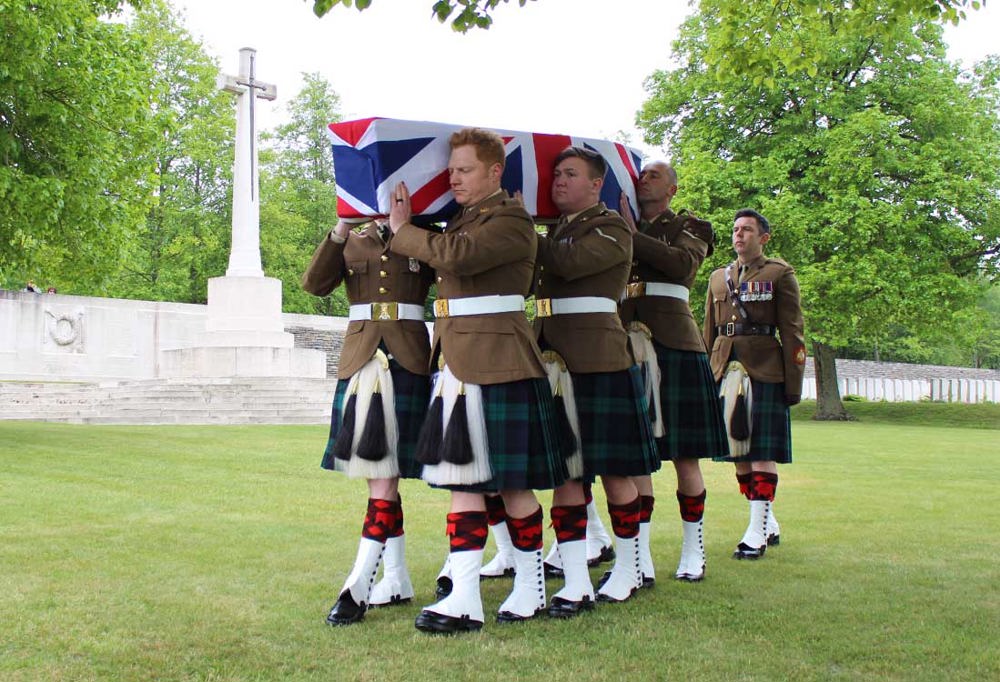 William was born in in Kilmarnock, Ayrshire to William and Mary Jane Johnston, although he was living with his widowed mother in Richhill, County Armagh in Northern Ireland at the time of his death during the Battle of Loos.

Sharon Williamson of Portadown, County Armagh, Pte Johnston’s great-great-niece and DNA donor said:
“I was sent an email by a relative in America who had been contacted by the MOD War Detectives to say that they had found remains from the Great War. They asked for my DNA, that was the start of our journey. Later, once it was confirmed that William was our relative, we couldn’t miss the opportunity to be here and pay our respects to a family member that, though we didn’t know, we did not want him to be alone on his final journey.”

The remains of another British soldier were found separately in the same area. Although it was not possible to identify him by name, MOD JCCC did confirm he served with the East Yorkshire Regiment due to two East Yorkshire shoulder titles being found with the remains.

The war diaries of the 8th Battalion of the East Yorkshire Regiment confirm that they were in the recovery location on 26th September 1915. On that day they suffered heavy casualties from machine-gun fire, having launched an attack on the enemy the previous day. Between the 25th and 27th September, they lost 15 officers and 266 other ranks, making it impossible for MOD JCCC to identify this soldier by name. 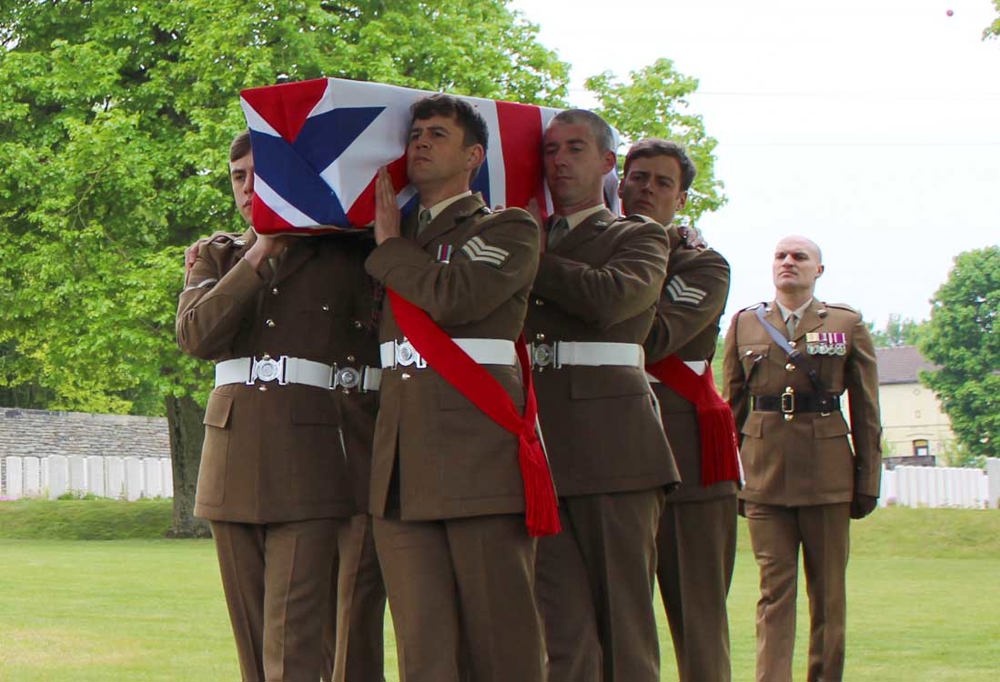 Soldiers of the Yorkshire Regiment carry the unknown soldier to his final resting place (Crown Copyright/A.Eden).

Louise Dorr, MOD JCCC Caseworker said:
“I’m both delighted and saddened that although I have been able to identify one of these soldiers by name, there are just too many casualties missing from the 8th East Yorkshire Regiment for us to be able to name their casualty. I’m moved to see them both laid to rest in front of their military family and, in Pte Johnston’s case, his biological family. May they both rest in peace.”

Padre Jeal, whose own grandfather Frederick Nichols served with the East Yorkshire Regiment during the Second World War said:
“To be involved today is a real privilege for me. When these two men died they did so in the service of our country: they gave everything. That’s so important to remember and to honour because by bearing their remains to their final rest, our young soldiers of today can see they walk in the footsteps of those giants who went before them.”

The graves will now be marked by headstones provided by the CWGC, who will care for their final resting place in perpetuity.

CWGC Horticulture Manager, Steve Arnold said:
“As the Recovery Officer, I was honoured to be able to retrieve these two British soldiers from where they had fallen over 100 years ago, together with the personal items that have enabled Private Johnston to be named. It is deeply moving to see them laid to rest today alongside their comrades; each time we engrave a new headstone we renew our commitment to caring for all the graves in our care in perpetuity.”