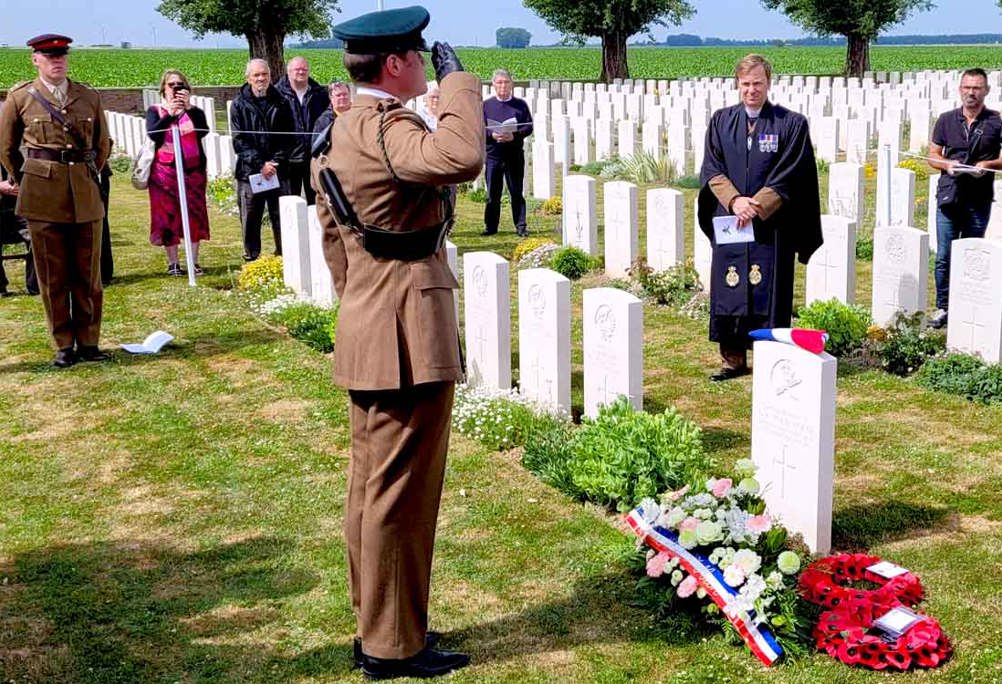 The grave of Second Lieutenant (2nd Lt) Osmund Bartle Wordsworth, the great-great-nephew of the poet William Wordsworth, has been rededicated in France more than a hundred years after his death.

The service, which was organised by the MOD’s Joint Casualty and Compassionate Centre (JCCC), also known as the ‘MOD War Detectives’, was held at the Commonwealth War Graves Commission’s (CWGC) H.A.C. Cemetery, Écoust-Saint-Mein, near Arras, in northern France.

The Reverend Thomas Wilde CF said:
“I feel very privileged to conduct the rededication service for 2nd Lt Wordsworth, it is important to honour and remember this brave officer for the sacrifice he made on behalf of his country. It is very powerful when you add a name to a grave.”

In 2012 the remains of an Officer wearing buttons of The Oxfordshire and Buckinghamshire Light Infantry (Ox & Bucks LI), were recovered by an archaeologist in the village of Henin-sur-Cojeul. Initial research conducted by the Soldiers of Oxfordshire Museum pointed to the Officer being one of four men. However, after an unsuccessful DNA-led investigation, he was buried in H.A.C. Cemetery in September 2015 as an unknown Officer of the Ox & Bucks LI.

Later, during the Covid-19 pandemic JCCC had time to look again at ‘cold cases’ where DNA had been taken but no match found. This further research successfully identified the unknown Officer as 2nd Lt Wordsworth.

2nd Lt Wordsworth was born on 17 May 1887 in Glaston, Rutland. He was the great-great-nephew of the poet William Wordsworth. He was one of nine children born to the Reverend Christopher Wordsworth and his wife Mary. Osmund was educated at Winchester College before attending Trinity College Cambridge. He emigrated to Canada to teach and became a published author.

In May 1915, Osmund returned to the United Kingdom, travelling onboard the ill fated liner the Lusitania with his sister Ruth. Six days into the voyage, on 7 May 1915, the ship was torpedoed off the coast of Ireland. Osmund is reported to have given his life belt to another passenger as the ship was sinking. Nonetheless, he and Ruth survived the disaster which cost the lives of 1,198 passengers and crew.

On 2 April 1917, the village of Henin-sur-Cojeul was recaptured by British forces as they pursued the enemy back to the Hindenburg Line. The attack on the village was carried out by 21st Infantry Brigade. It was during this attack that 2nd Lt Wordsworth, who was serving with 21st Machine Gun Company, was killed.

2nd Lt Wordsworth had initially been commissioned into the Ox & Bucks LI, and was wearing his former unit’s buttons when he died. Having conducted research suggesting this unknown Officer could be 2nd Lt Wordsworth, the final piece of the jigsaw was to carry out DNA testing. A great nephew of 2nd Lt Wordsworth was located and proved to be a DNA match to the soldier.

Rosie Barron, JCCC case lead said:
“Having investigated all missing Officers of the Ox & Bucks LI missing in France, it became apparent that none had been killed close to the location where this Officer was found. I therefore turned the focus of my research to the location of the find; this was when I discovered 2nd Lt Wordsworth had been killed in Henin-sur-Cojeul on the day the village was recaptured in 1917. It was very exciting to have finally identified this man and to give him his name back. It is always an honour to organise rededication services such as this, they are the conclusion of a century old mystery for families such as the Wordsworths.”

Reports from the day of his death suggest that 2nd Lt Wordsworth saw a gun crew was struggling to get into position and went to assist them. He was shot through the chest and was buried in Henin-sur-Cojeul. His remains were not recovered after the Great War and, as he was still missing, 2nd Lt Wordsworth was commemorated on the Arras Memorial.

The service was attending by members of the extended Wordsworth family including Araminta Wordsworth, his first cousin once removed who travelled from Canada to attend:

Liz Woodfield, Director, External Relations at the Commonwealth War Graves Commission, said: “It is a privilege and honour to be able to formally recognise Second Lieutenant Wordsworth’s final resting place at our H.A.C Cemetery, more than 100 years after his death.”