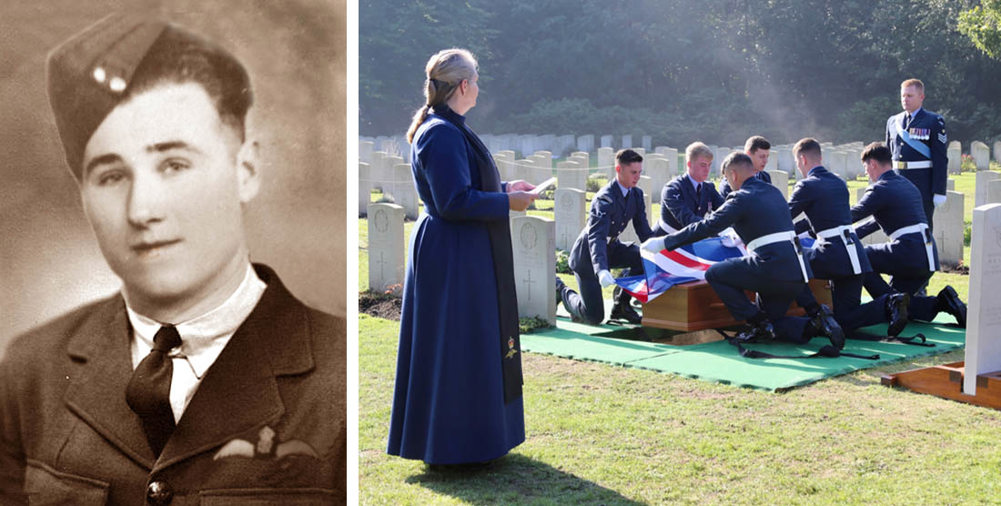 A full military burial has been held in the Netherlands for WW2 RAF pilot Flight Sergeant (Flt Sgt) William Robert Stephen Hurrell, 78 years after he was killed in action.

The service, at Jonkerbos War Cemetery on Thursday 29 September, was attended by members of his family, who had travelled from Australia, representatives of the RAF, the British Embassy in the Netherlands and dignitaries from the town of Lochem. Members of the Queen’s Colour Squadron (QCS) bore his coffin.

The ceremony was led by Reverend (Squadron Leader) Josephine Critchley, Chaplain at RAF Honington, and organised by the MOD’s Joint Casualty and Compassionate Centre (JCCC), also known as the ‘MOD War Detectives’.

The ceremony included poems and readings by serving RAF personnel, family and dignitaries from Lochem; a town instrumental in the recovery of Flt Sgt Hurrell’s remains.

The remains of Flt Sgt Hurrell were discovered in 2019 after an excavation of an aircraft on farmland near the village of Eefde in the municipality of Lochem, as part of the Netherlands National Aircraft Recovery Program.

Working alongside the Recovery and Identification Unit of the Royal Netherlands Army and The RAF Air Historical Branch, JCCC reviewed documents confirming the plane recovered was Hawker Typhoon MN582.

William Robert Stephen Hurrell was born on 1 May 1923 in London to Sydney and Daisy Hurrell. His enlistment service records from March 1941 state his religious denomination as “C of E” and show he lived in the East Ham area of London. Prior to his RAF career he was an apprentice fitter and turner. After joining the RAF he served in India and America before receiving his pilot’s wings in 1942. He was promoted to Flt Sgt a year later. He crashed on 26 September 1944 while flying in Hawker Typhoon MN582 of No.175 Squadron RAF in a formation of six aircraft on an armed reconnaissance mission north of Arnhem when they were attacked by up to 60 enemy Me 109’s. 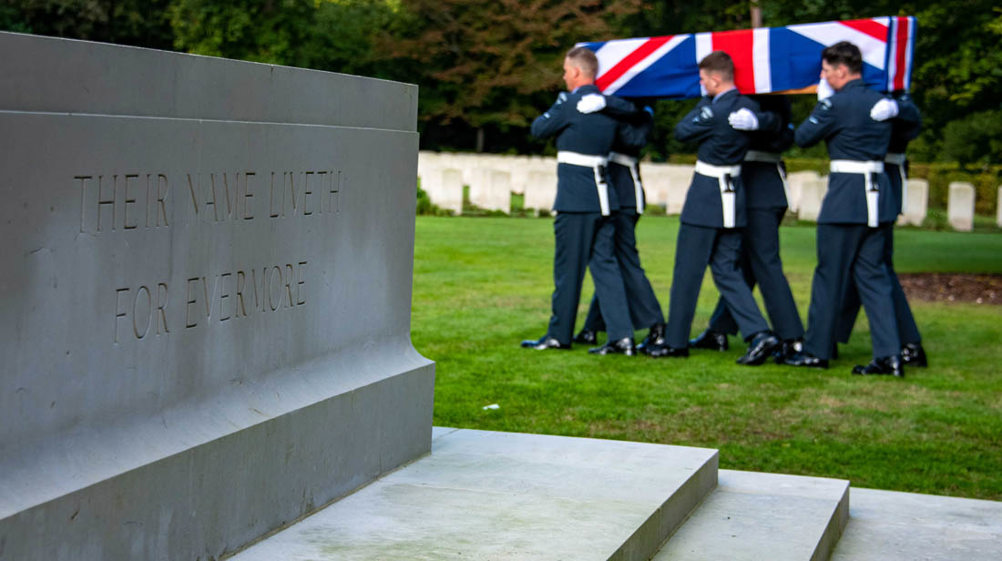 Tracey Bowers, JCCC said:
“It has been an absolute privilege to arrange this ceremony for Flt Sgt William Hurrell and I am grateful for the help given by the Community of Lochem. I am honoured to stand alongside his military and blood family to pay him this final tribute.”

Brydie Hurrell, Flt Sgt Hurrell’s great niece said:
"We grew up knowing that Bill was shot down at the end of the war and that his parents had never found him. We knew he was in the Netherlands – we just weren’t sure where exactly. When we heard about the salvage project we were over the moon. Representing the rest of my family back home means a lot. Bill’s parents and his brother, my grandfather, died never knowing where he was , butwe know have closure for them and for ourselves."

Rev.Critchley, said:
“As we have committed William’s body to the ground, we go from here knowing that his selfless actions ensured the security of so many; as he laid down his life, we are assured that he rests in God’s loving presence and is at peace."

Director for the Central and Southern European Area at the CWGC, Geert Bekaert, said:
“We are privileged to host this ceremony today, dedicated to Flt Sgt Hurrell and the ultimate sacrifice he paid fighting for his country 78 years ago. It is our honour to commemorate him and care for his grave in perpetuity.”

Share this on
Tags Burials Jonkerbos Cemetery The Netherlands