75 Years Since the end of the Second World War in the Pacific.

Remembering alongside National Army Museum, the RAF Museum and The National Museum of the Royal Navy. 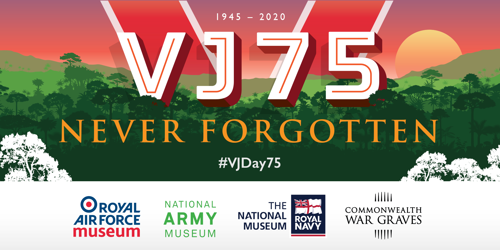 Marking the 75th anniversary of Victory over Japan (VJ) Day, this series of talks and events over 14 - 16 August 2020 explores the contribution of British Commonwealth forces during the Far East campaign of the Second World War.

The National Museum of the Royal Navy, the National Army Museum, the Royal Air Force Museum and the Commonwealth War Graves Commission are joining forces to mark the 75th anniversary of VJ Day with a free programme of online talks and events.

From 1941 to 1945, British Commonwealth forces and their allies fought a bitter campaign against the Japanese in Asia.

The fighting took place over challenging terrain, from the jungles of Burma to the remote islands of the Pacific, and always against a tenacious enemy.

Discover the campaign’s vast geographical spread, the experiences of individual servicemen and women – both as combatants and captives – and the impact and legacy of the campaign on the Armed Forces and the wider world.

Highlights of the programme include:

See what the other museums are doing

and find out how you can keep their stories alive by supporting the Commonwealth War Graves Foundation:

Find out more about VJ Day

We'll be releasing a string of multimedia articles that tell the story of the war in the Pacific and the events leading up to the end of the Second World War.

In December 1941 Imperial Japan launched a devastating attack on American, British, Commonwealth and Dutch territories throughout Southeast Asia and the Pacific. Focused on the war against Germany, Allied forces in the region were under strength, under-equipped and ill prepared to meet the Japanese onslaught.

Read more about the start of the war in the Pacific.

Prisoners of the Japanese

As Japanese forces invaded the Pacific and Southeast Asia in December 1941 and early 1942, they captured more than 200,000 Commonwealth, Dutch and American prisoners of war – including 85,000 Commonwealth soldiers from the fall of Singapore alone. Thousands of civilians would be interned as well.

Find out more about the conditions these prisoners faced and how we remember them today.

By May 1942 Japanese forces had occupied vast swathes of Southeast Asia and the Pacific, capturing hundreds of thousands of Allied servicemen. Despite this stunning success their victory was not total: they still faced a grinding war in China, a resurgent American Pacific Fleet, Commonwealth forces that escaped Burma into India, and the Australian foothold on the island of New Guinea.