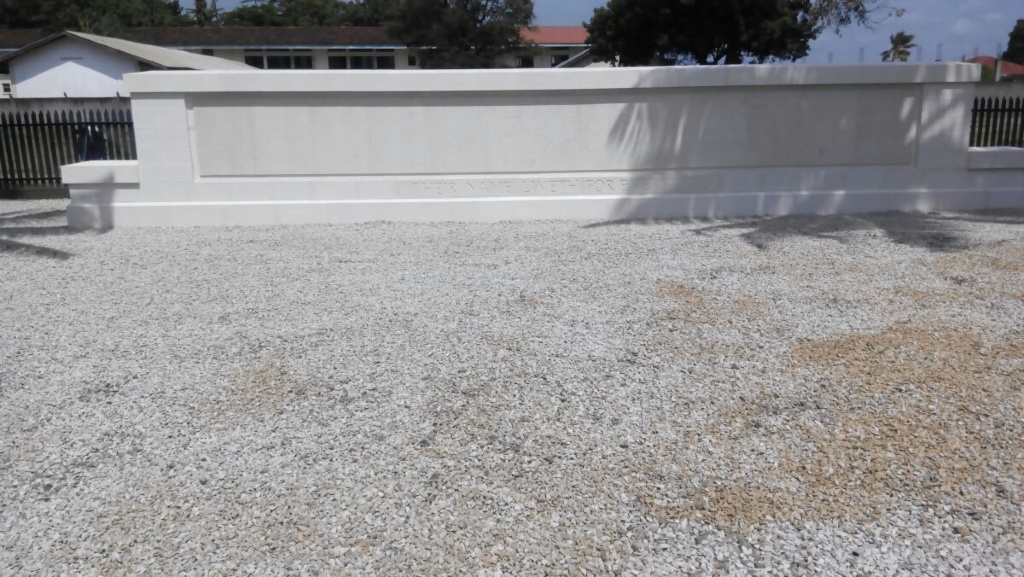 Tanga is on the coast of Tanzania, 56 kilometres south of the border with Kenya. Tanga (Jasin) Memorial will be found in Tanga Memorial Cemetery, which is south-west of the town and contains the burials of British and Indian soldiers. A single track railway line within 50 metres of the cemetery may aid visitors as a reference point, and the cemetery is surrounded on three sides by buildings (one of which has remained half built for many years).

As the cemetery has no permanent staff, it is kept locked with coded padlock. If you are intending to visit this site, the code to the padlock can be obtained from our office in Kenya on 00 254 20260 4301. Wheelchair access to Tanga Memorial Cemetery is possible via main entrance. For further information regarding wheelchair access, please contact our Enquiries Section on telephone number 01628 507200.

At the outbreak of the First World War Tanzania was the core of German East Africa. From the invasion of April 1915, Commonwealth forces fought a protracted and difficult campaign against a relatively small but highly skilled German force under the command of General von Lettow-Vorbeck. When the Germans finally surrendered on 23 November 1918, twelve days after the European armistice, their numbers had been reduced to 155 European and 1,168 African troops. The Indian Expeditionary Force "B" arrived on the coast of German East Africa on 1 November 1914, and on the next morning they demanded the surrender of the Port of Tanga. They attacked it on the following night, but the German garrison, hastily reinforced, compelled them to retire. The renewed attack on 4 November was unsuccessful, and the force was re-embarked with 800 casualties. The 2nd Loyal North Lancashire Regiment, the 13th Rajputs, the 61st King George's Own Pioneers, the 63rd Palamcottah Light Infantry, the 98th Infantry and the 101st Grenadiers sustained most of the casualties; the 2nd and 3rd Kashmir Rifles and the Gwalior (Imperial Service) Infantry also took part in the operations. Tanga was eventually occupied by a Commonwealth force almost without opposition on 7 July 1916, and the bodies of 270 officers and men who had been killed in the earlier attack were reburied in TANGA MEMORIAL CEMETERY. It was not possible to identify the bodies, and the graves are therefore recorded as those of 270 unidentified British and Indian soldiers. It is known, however, that these unidentified soldiers are among the 64 British and 330 Indian officers and men who died in the attack and whose graves are not known, and these 394 names are engraved on a screen wall in the cemetery. The TANGA (JASIN) MEMORIAL, which occupies part of the screen wall, commemorates by name 62 Indian soldiers who died in or near Jasin in January and July 1915 and whose graves are not known. Jasin was a frontier town on the coast north of Tanga, taken from the Germans in January 1915. The Jind Infantry and Kashmir Rifles garrisoned the town, which was attacked and retaken by a German force of 2,000 on 18 January.