After the exceptional rainfall on 27th and 28th August 2020, a 24 metre section of the rear wall fell into our Cemetery. The rear retaining wall is the property of the adjacent Naval Base who have now started the necessary clearance for the rebuilding work. A temporary entrance has been installed and the rear section of the cemetery is being fenced off in preparation for building work starting. Access to parts of the cemetery are currently restricted to ensure public safety, but the burial area and memorial are not affected by the works.

It is important to check the weather forecast and avoid visiting between May and September, due to the intense heat.

The Cemetery is located on the busy road to the Airport. Due to building work outside our control, the available parking at the Cemetery is now considerably lower than the level of the main road.

There are steps either side of the Memorial entrance and near the Cross of Sacrifice. 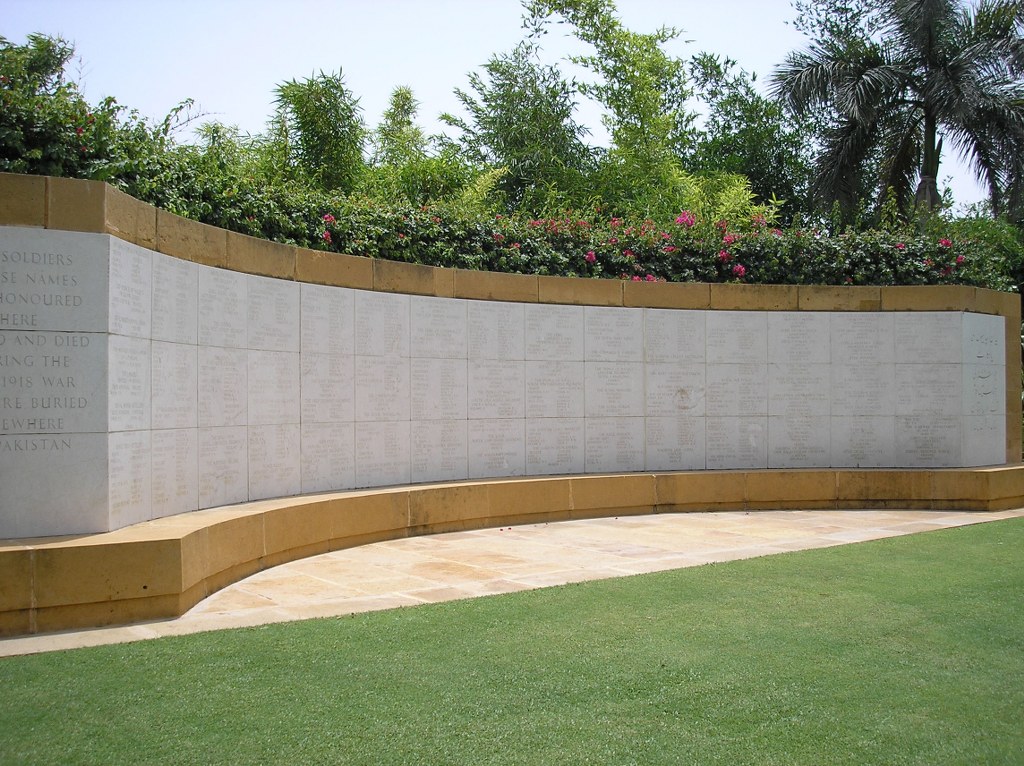 Karachi, formerly the capital of the Republic of Pakistan, is the country's only sea port and the main gateway for its trade. It is also the maritime terminus of the Pakistan Railway and its airport, situated on one of the trunk air routes of the world, gives it considerable additional importance. The city lies at the extreme western end of the delta of the Indus, on a backwater protected by a high rocky headland. To the north is dry, hilly country, while to the south creeks and mangrove swamps stretch to the sea.

The War Cemetery was created by the Commonwealth War Graves Commission to receive the graves from a number of civil and cantonment cemeteries scattered through the north of Pakistan and the tribal areas, where their permanent maintenance was not possible. The imposing entrance of honey-coloured stone, quarried at Jungshai, near Hyderabad, is one part of a dual memorial the other part being in Delhi, to 25,000 men of the army and air forces of undivided India who died during the 1939-1945 War while on service in nonoperational zones.

The 1914-1918 Memorial is located at the rear of the cemetery opposite the entrance feature and it commemorates 575 Commonwealth casualties. Initially the memorial was designed to commemorate those who served in garrisons and died in Pakistan (formerly part of India) during the 1914-1918 War and who lie buried in civil and cantonment cemeteries there, excluding those graves lying west of the river Indus who it was decided would be commemorated on the Delhi Memorial (India Gate). However, due to difficulties in adding to the Delhi Memorial (India Gate) in recent years, some casualties who are known to have been buried in sites* west of the river Indus have subsequently been added to this memorial instead.

The cemeteries in which they lie buried, and which have since been found impossible to maintain adequately, are as follows :