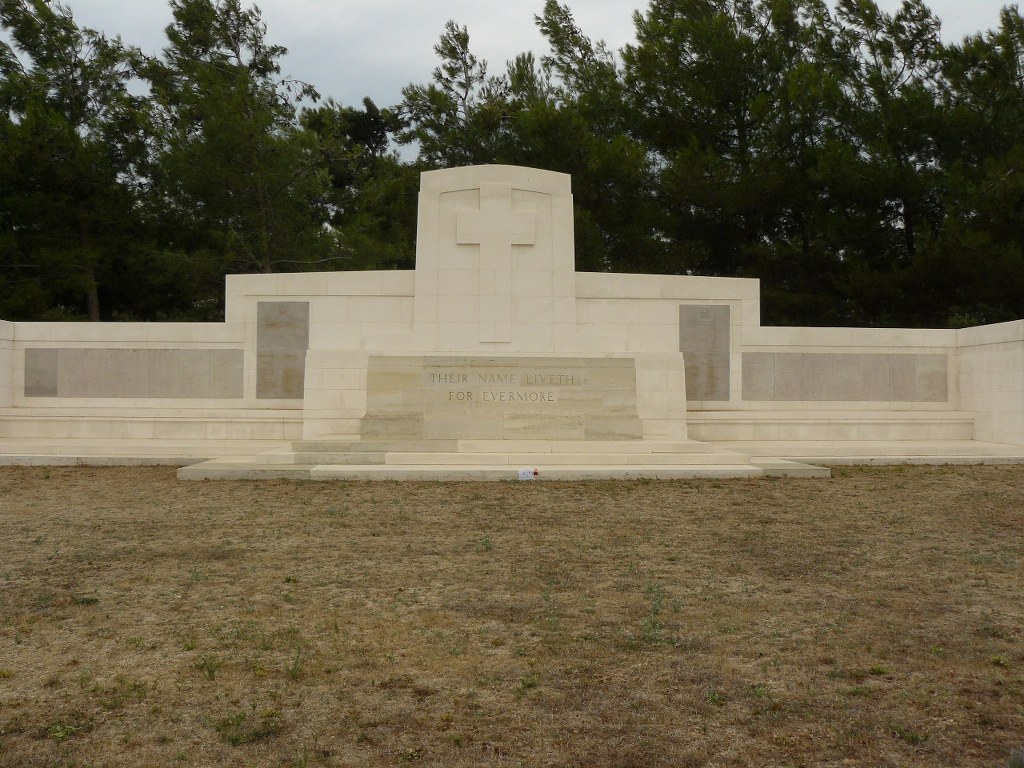 Twelve Tree Copse (New Zealand) Memorial is in Twelve Tree Copse Cemetery, which is in the Helles area about 1 kilometre south-west of the village of Krithia. Take the road opposite the Kabatepe Museum to Helles/Alcitepe. After 14.2 km's, take a right turn at the 'T' junction to Twelve Tree Copse and other Helles cemeteries. After 14.3 km's take the left fork and the cemetery will be found on the right after 15.4 km's.

The Memorial is situated within the Twelve Tree Copse Cemetery. The Cemetery is permanently open and may be visited at any time.

The eight month campaign in Gallipoli was fought by Commonwealth and French forces in an attempt to force Turkey out of the war, to relieve the deadlock of the Western Front in France and Belgium, and to open a supply route to Russia through the Dardanelles and the Black Sea. The Allies landed on the peninsula on 25-26 April 1915; the 29th Division at Cape Helles in the south and the Australian and New Zealand Corps north of Gaba Tepe on the west coast, an area soon known as Anzac. On 28 April, following the landings at Helles, the first attack was mounted towards Achi Baba, the ridge which dominates the southern part of the peninsula. Fatigue, however, brought the assault to a halt some kilometres short of the objective, near the village of Krithia. Turkish counter attacks followed but were repulsed and during the period 6-8 May, the 29th and French Divisions, reinforced by the 2nd Australian and New Zealand Infantry Brigades, carried out a renewed attack on Krithia, making some gains but suffering heavy casualties. Between 1 May and the beginning of June, the 29th Indian Infantry Brigade and 42nd (East Lancashire) Division landed on the peninsula. With these reinforcements, the Allied force at Helles pushed forward once more on 4 June, but again to little effect. A further attack between 28 June and 5 July at Gully Ravine inflicted heavy casualties on the Turks, but despite local gains - at one point the line was pushed forward more than a kilometre - there was no breakthrough. By 13 July the advance at Helles was effectively over and the position remained unchanged until the evacuation in January 1916. TWELVE TREE COPSE (NEW ZEALAND) MEMORIAL is one of four memorials erected to commemorate New Zealand soldiers who fell on the Gallipoli peninsula and whose graves are not known. The memorial relates to engagements outside the limits of Anzac in which New Zealand soldiers took part. It bears almost 180 names. TWELVE TREE COPSE CEMETERY was made after the Armistice when graves were brought in from isolated sites and small burial grounds on the battlefields of April - August and December 1915. The most significant of these burial grounds were Geoghan's Bluff Cemetery, containing 925 graves associated with fighting at Gully Ravine in June - July 1915: Fir Tree Wood Cemetery, where the 29th Division and New Zealand Infantry Brigade fought in May 1915 and Clunes Vennel Cemetery, containing 522 graves. There are now 3,360 First World War servicemen buried or commemorated in the cemetery. 2,226 of the burials are unidentified but special memorials commemorate many casualties known or believed to be buried among them, including 142 officers and men of the 1st Essex who died on 6 August 1915, and 47 of the 1st/7th Scottish Rifles killed on 28 June.