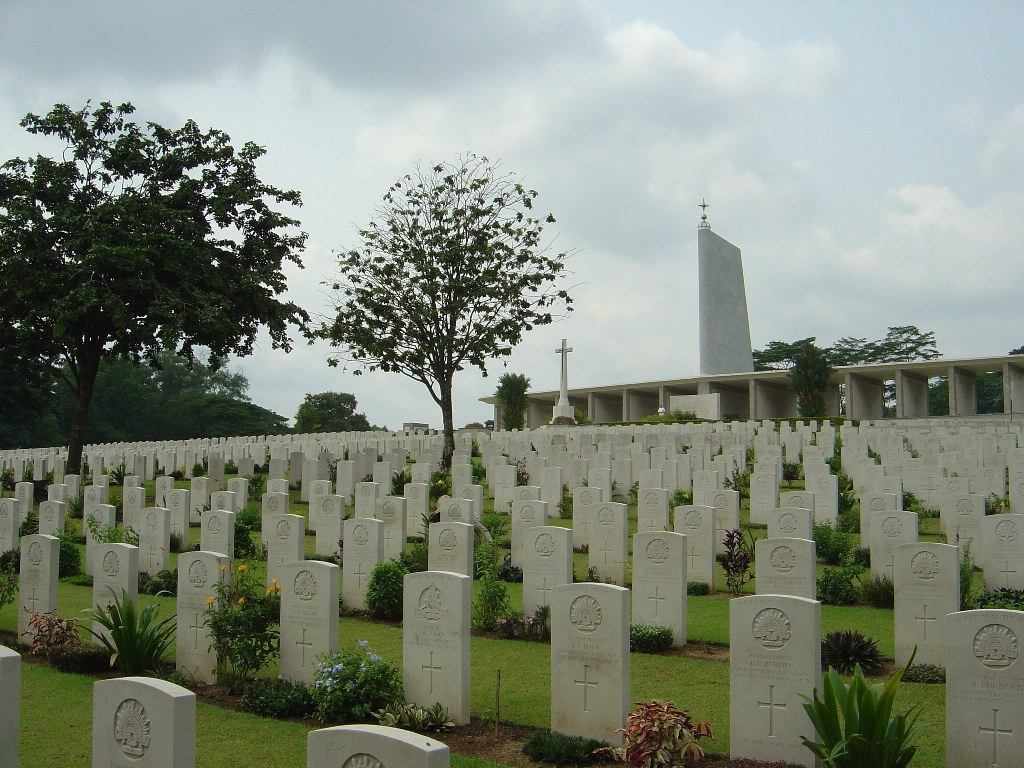 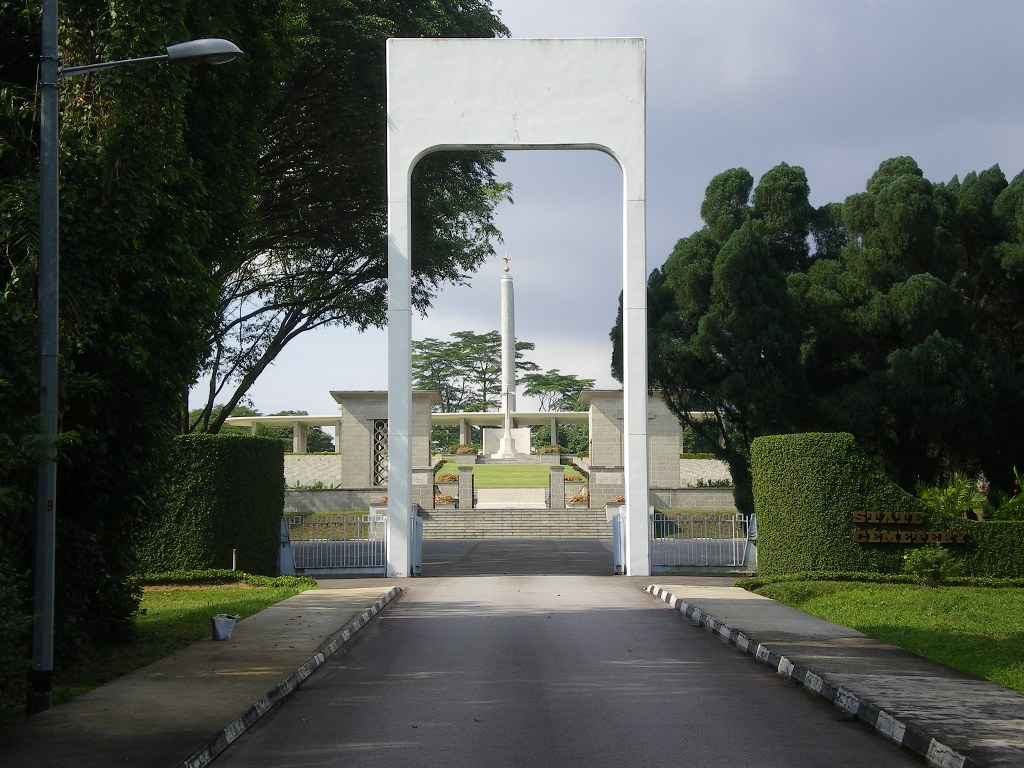 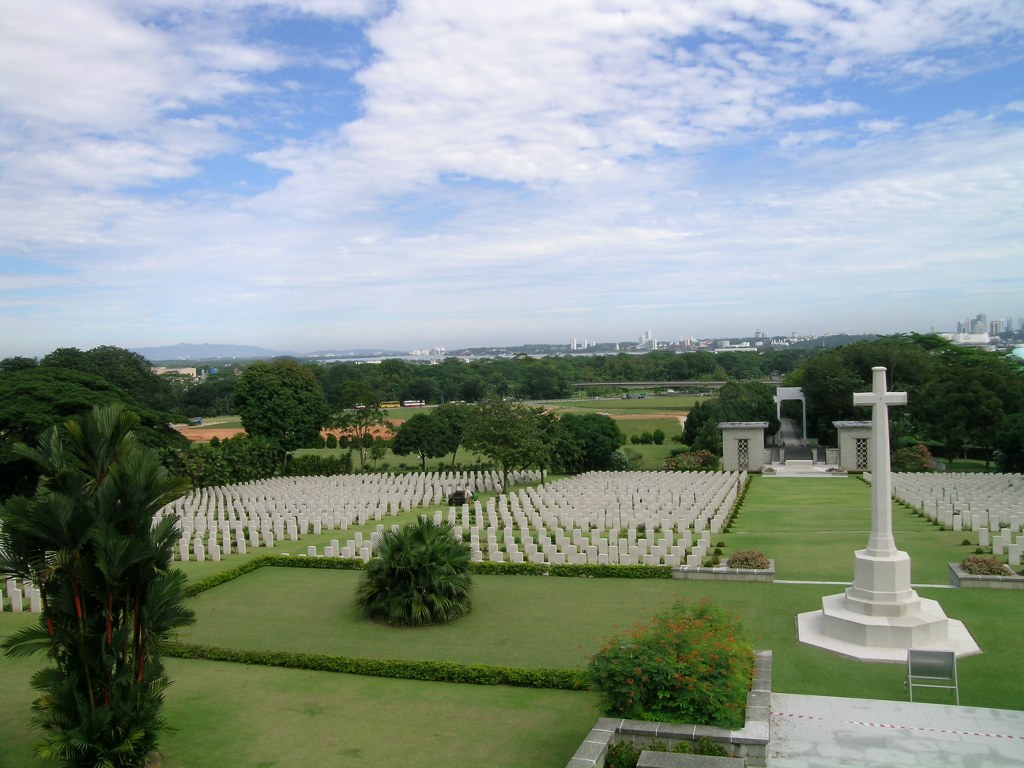 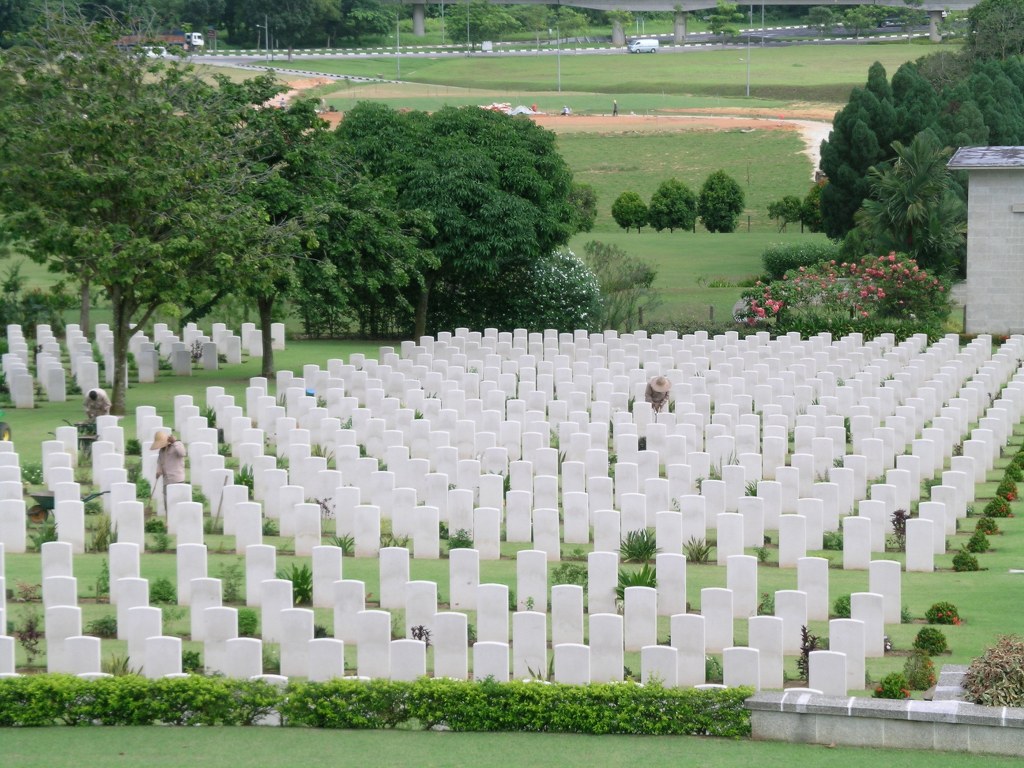 The danger of wild boar 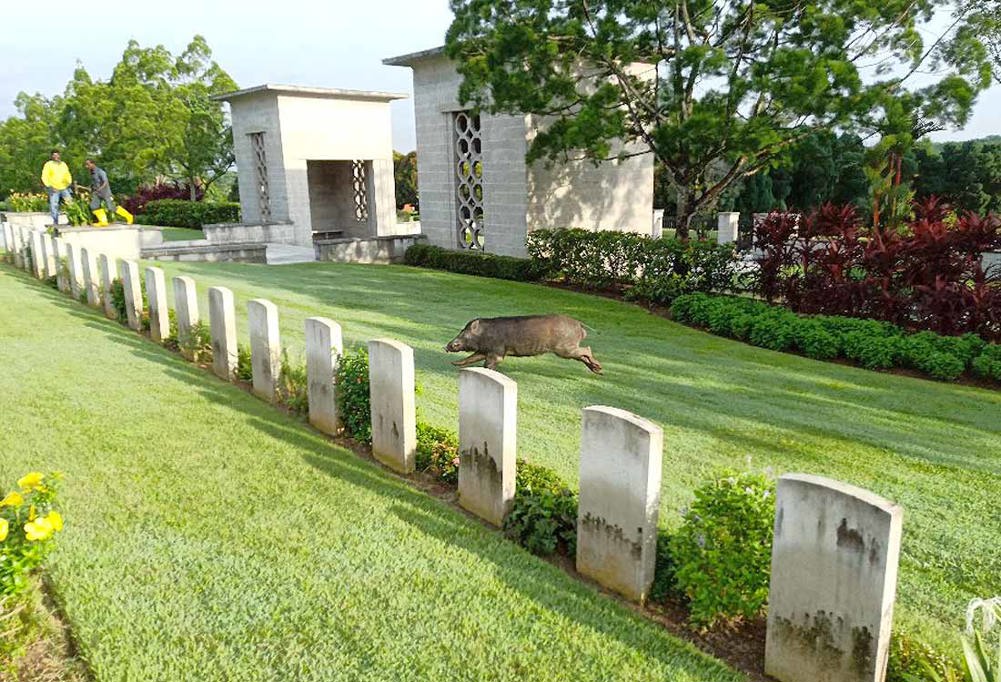 Cracked headstones and torn-up turf, all courtesy of our least wanted guest in Singapore – wild boar.

The creatures prove a real problem for the Commonwealth War Graves Commission. The open land of Kranji War Cemetery, on the outskirts of the Asian city-state, is an appealing place for them. 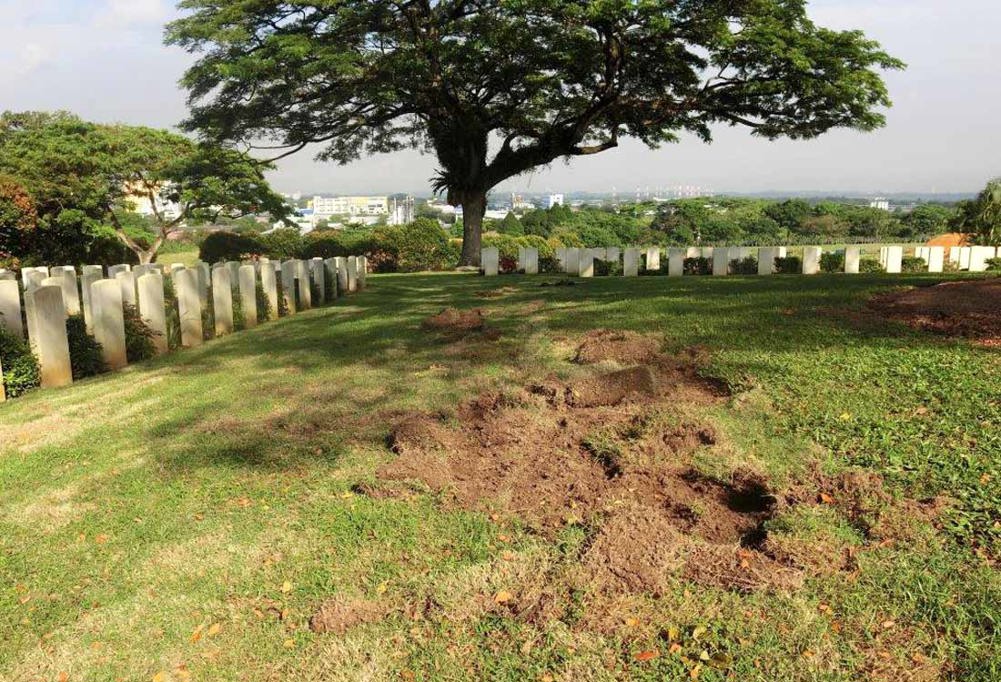 The tell-tale signs of wild boar damage. When a wild boar is spotted, our cemetery must be evacuated.

For decades gardeners here have had to look out for boar and the damage they cause to the war cemetery they care for. More than 4,000 Second World War dead are buried here. Another 25,000 are named on a series of war memorials.

From high up on this vantage point, you can look out and see where the Japanese Army came from on that fateful February of 1942, during the Battle of Singapore. 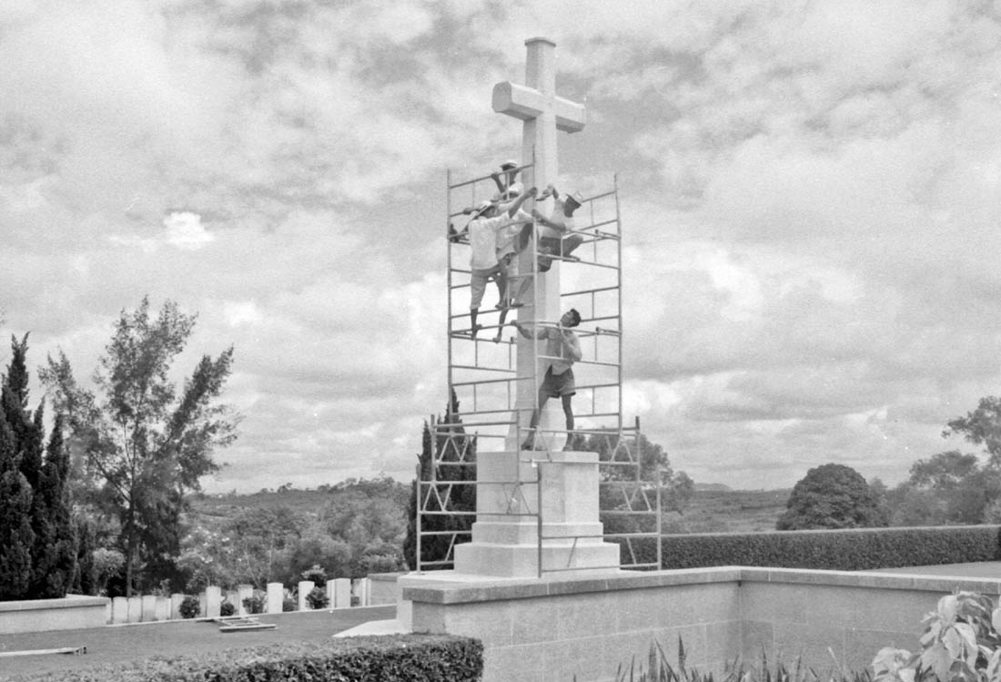 Kranji War Cemetery's Cross of Sacrifice under construction after the Second World War.

Christopher Leong, our head gardener at Kranji, is all too familiar with the challenges of preserving this reminder of all those lost lives.

His team take seriously any sighting of wild boar, immediately evacuating the site.

Specialist fencing runs deep underground to prevent all but the most determined of invaders from getting through.

It’s not just animals that put pressure on this historic site. The weather plays its own part too, bringing trees down in the monsoon. 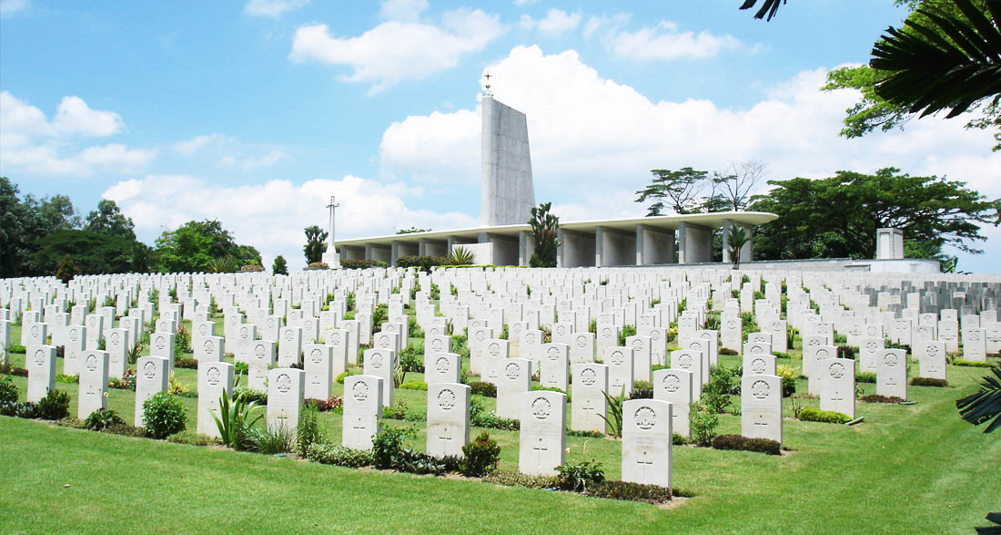 The grand Singapore Memorial, bearing more than 24,000 names, stands at the top of the cemetery.

The Singapore Memorial sits on the highest point of the hillside cemetery now. The iconic design pays tribute to the air force, navy and army – the wings of a plane, the fin of a submarine, and the rows of soldiers stood to attention.

Weathering has already taken its toll on the memorial. CWGC is restoring the structure, tearing off the old waterproof layer on its roof, and replacing it with more robust modern materials.

While the wild boar might be a dangerous visitor, the cemetery still draws in people wanting to pay their respects. Every year thousands turn out for the Remembrance Sunday service, just the kind of guests our founders had in mind, all those years ago. 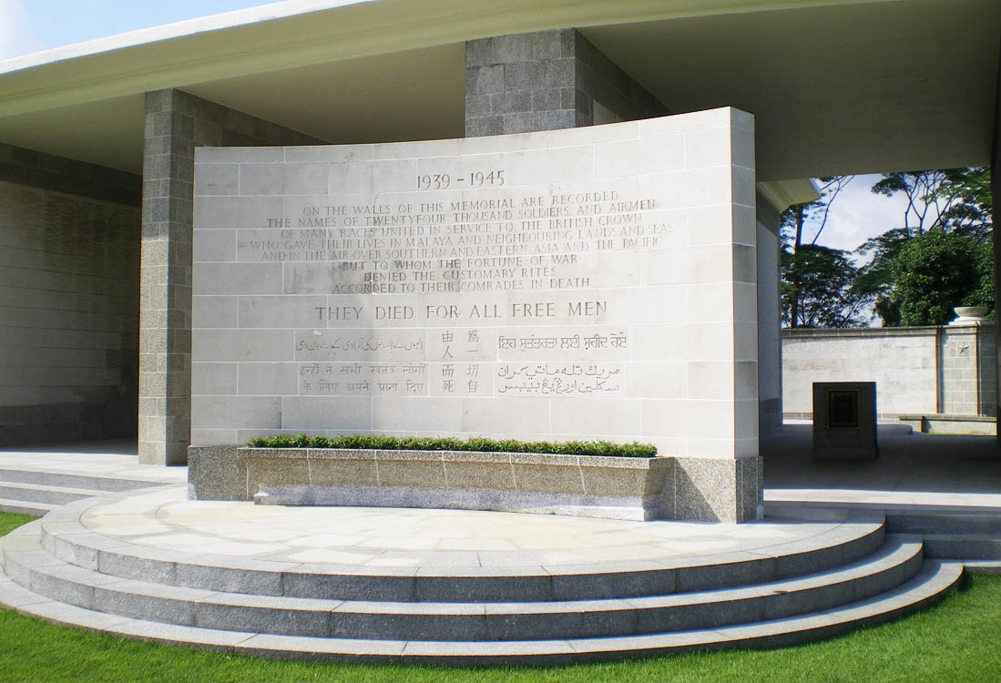 Kranji War Cemetery is 22 kilometres north of the city of Singapore, on the north side of Singapore Island overlooking the Straits of Johore. It is located just to the West of the Singapore-Johore road (Bukit Timah Expressway) on Woodlands Road, just to the south of the crossroads with Turf Club Avenue and Kranji Road. There is a short approach road from the main road. The Cemetery is known locally as Kranji Memorial and one must be sure of the address before boarding a taxi as most taxi drivers do not know the Cemetery. There are also bus stops on the main road facing the Cemetery. The Kranji MRT (train) terminal is a short distance from the Cemetery, approximately 10 to 15 minutes away by foot. A previous visitor has advised us that a small map of the route can be obtained from the MRT ticket office.

Kranji War Cemetery is open every day 07:00-18:30. The cemetery is constructed on a hill with the means of access being via three flights of steps, rising over four metres from the road level. There is no disabled access at this site but if you wish to visit and need assistance kindly please contact our Canada, Americas & Pacific Area Office in advance of your visit via enquiries@cwgc.org. We can then notify our Senior Head Gardener to expect you and assist with your visit.

Before 1939, the Kranji area was a military camp and at the time of the Japanese invasion of Malaya, it was the site of a large ammunition magazine. On 8 February 1942, the Japanese crossed the Johore Straits in strength, landing at the mouth of the Kranji River within two miles of the place where the war cemetery now stands. On the evening of 9 February, they launched an attack between the river and the causeway. During the next few days fierce fighting ensued, in many cases hand to hand, until their greatly superior numbers and air strength necessitated a withdrawal.

After the reoccupation of Singapore, the small cemetery started by the prisoners at Kranji was developed into a permanent war cemetery by the Army Graves Service when it became evident that a larger cemetery at Changi could not remain undisturbed. Changi had been the site of the main prisoner of war camp in Singapore and a large hospital had been set up there by the Australian Infantry Force. In 1946, the graves were moved from Changi to Kranji, as were those from the Buona Vista Military Cemetery. Many other graves from all parts of the island were transferred to Kranji together with all Second World War graves from Saigon Military Cemetery in French Indo-China (now Vietnam), another site where permanent maintenance could not be assured.

There are now 4,461 Commonwealth casualties of the Second World War buried or commemorated at KRANJI WAR CEMETERY. More than 850 of the burials are unidentified. The Chinese Memorial in Plot 44 marks a collective grave for 69 Chinese servicemen, all members of the Commonwealth forces, who were killed by the Japanese during the occupation in February 1942.

Within Kranji War Cemetery stands the SINGAPORE MEMORIAL, bearing the names of over 24,000 casualties of the Commonwealth land and air forces who have no known grave. Many of these have no known date of death and are accorded within our records the date or period from when they were known to be missing or captured. The land forces commemorated by the memorial died during the campaigns in Malaya and Indonesia or in subsequent captivity, many of them during the construction of the Burma-Thailand railway, or at sea while being transported into imprisonment elsewhere. The memorial also commemorates airmen who died during operations over the whole of southern and eastern Asia and the surrounding seas and oceans.

After the war, it was decided that as individual identification of the dead would be impossible, the grave should be left undisturbed. The grave was suitably enclosed, consecrated by the Bishop of Singapore, and a cross in memory of all of those buried there was erected over it by the military authorities. The 107 Commonwealth casualties buried in the grave are commemorated on the Singapore Civil Hospital Grave Memorial.