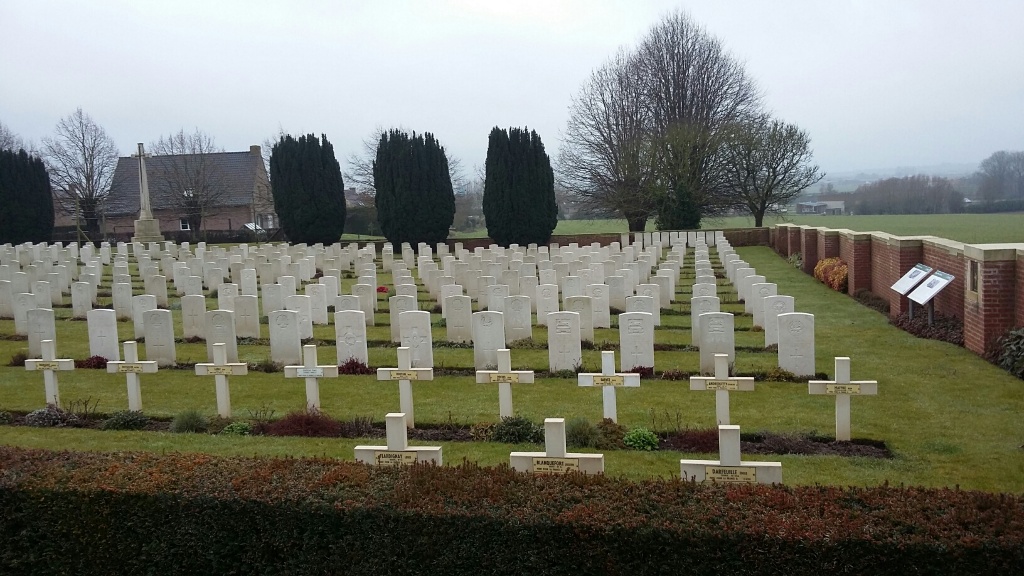 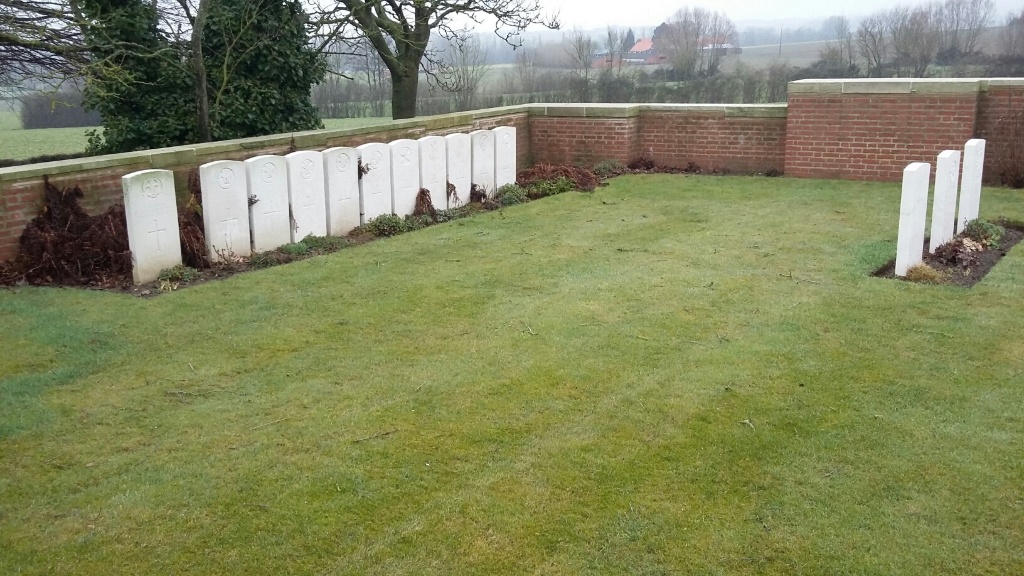 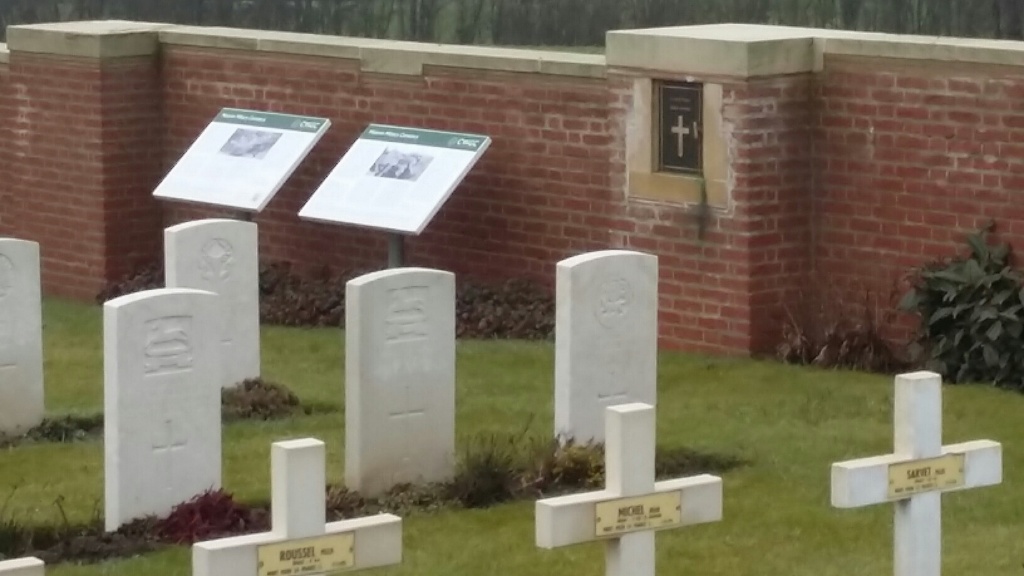 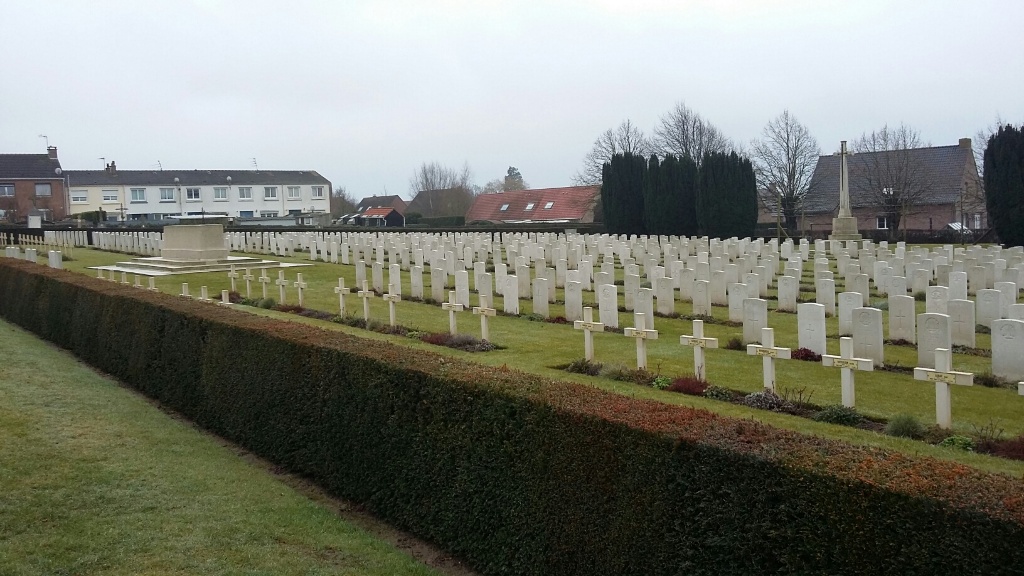 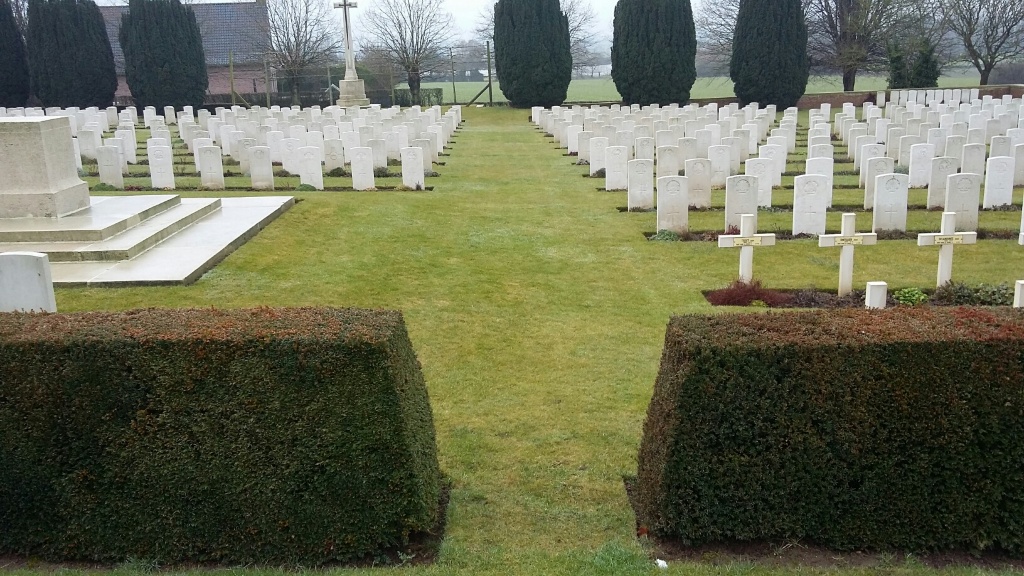 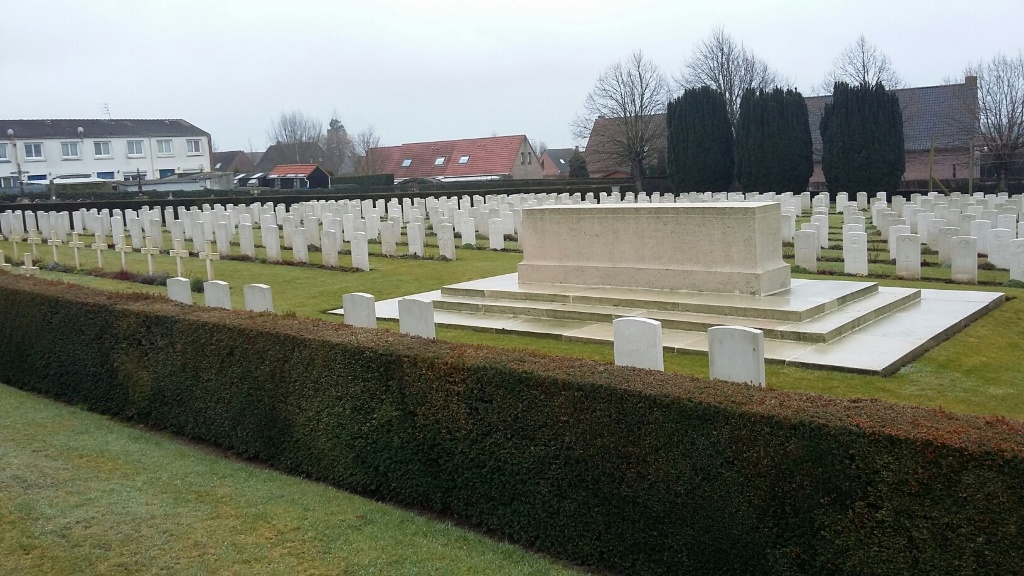 Meteren is a village 17.5 kilometres south-west of Ieper (Belgium) and 3 kilometres west of Bailleul on the main road to Cassel. When heading through the village towards Bailleul from Cassel, turn left along D18 opposite the Mairie. The cemetery is 200 metres further up this road on the left hand side and is situated to the rear of the civil cemetery.

Meteren was occupied by German forces early in October 1914 and on 13 October, their entrenched positions covering the village were captured by the 10th Brigade of the 4th Division. The village then remained in Allied hands until the German offensive of April 1918. The 33rd Division held it against heavy German attacks on 13 April, but it was lost on the 16th. The sector was then taken over by French troops for a time, but on 19 July, the 9th (Scottish) Division (2nd Royal Scots Fusiliers and South African Composite Battalion) recovered the site of the village after a fortnight's bombardment which completely destroyed the houses. The cemetery was made in 1919 by the French authorities, who brought in Commonwealth, French and German graves from the neighbouring battlefields and from other cemeteries, which included the following:- BERTHEN CHURCHYARD, in which 13 soldiers and airmen from the United Kingdom, two soldiers from Canada, and one soldier from Newfoundland were buried (by Field Ambulances or fighting units) in 1916 and 1918. LE ROUKLOSHILLE MILITARY CEMETERY, METEREN, a little South of the hamlet of Le Roukloshille, between Meteren and Godewaersvelde. Here, in April-August 1918, 38 soldiers from Australia, 26 soldiers and airmen from the United Kingdom and one French soldier were buried by fighting units. METEREN CHURCHYARD, in which 11 soldiers from the United Kingdom were buried (one in 1914 and the others in 1917) by Field Ambulances or fighting units. MONT-DES-CATS BRITISH AND INDIAN CEMETERIES, GODEWAERSVELDE, a quarter of a mile South-East of the gates of the Trappist monastery. The hill was captured on the 12th October 1914, by the 4th Hussars, the 5th and 16th Lancers and "D" Battery, R.H.A. Two small graveyards were made in April 1915, one containing the graves of nine soldiers from the United Kingdom and two from Canada, and the other those of 16 soldiers from India. Six other British soldiers, buried within the Monastery, have also been reinterred in Meteren Military Cemetery. The German and some of the French graves have since been removed to other cemeteries. Meteren Military Cemetery now contains 768 Commonwealth burials and commemorations of the First World War. 180 of the burials are unidentified but there are special memorials to five casualties believed to be buried among them. There are also special memorials to one soldier buried in Meteren Churchyard, and one Indian soldier buried in Mont-des-Cats Indian Cemetery, whose graves were destroyed in later fighting. There are also 69 French burials here. The cemetery was designed by Sir Herbert Baker.